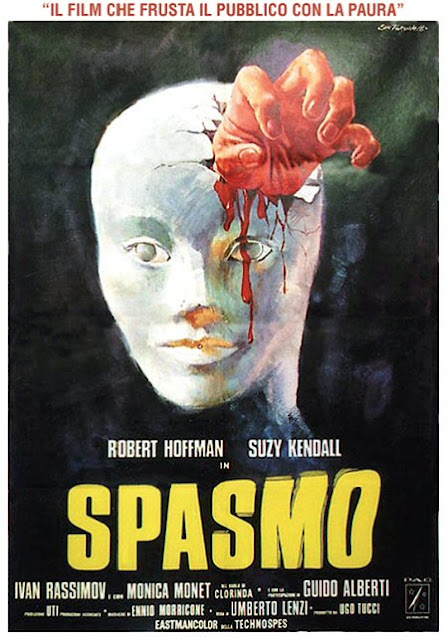 Well, my Exploito All’Italiana season earlier this year may have stalled after three measly reviews, but my concerted attempts to watch and write about as many horror movies as possible during October certainly helped get things back on track, with a few delirious evenings spent in the company of Cinecittà’s favourite sons, so – let’s get going with some more glorious, blood-soaked escapism...

Over the years, I’ve developed quite a soft spot for the work of Umberto Lenzi, and I tend to feel he gets somewhat of a raw deal from more – uh – ‘high-minded’ fans of Italian cult cinema. At his best, Lenzi was capable of delivering genuinely great movies (his ‘70s poliziotteschi entries chiefly spring to mind), and, even if circumstances rarely allowed him to deliver said ‘best’, his remaining filmography is nonetheless characterized by such a surfeit of high energy, non-fuck-giving, eager-to-please craziness that it would be churlish not to simply give in and be entertained by the majority of the pictures that bear his name, however shamelessly awful they may be in conventional terms (his much-loved ‘Nightmare City’ (1981) is a perfect case in point).*

Though it has rarely found favour with genre critics, I was thus delighted to discover that Lenzi’s late-to-the-party giallo ‘Spasmo’ (its title simply the Italian for “Spasm” you’ll note, rather than an insult to cerebral palsy sufferers) follows this latter formula to a tee, transforming a production that could easy have been a bit of an also-ran within the genre in the hands of another director into an uproariously enjoyable exercise in mild to moderate level celluloid delirium.

Veering somewhat toward the more excessive/ridiculous end-point of the genre already explored by Emilio P. Miraglia in ‘The Night Evelyn Came Out of the Grave’ (’71) and ‘The Red Queen Kills Seven Times’ (’72), ‘Spasmo’ dials down the sexual content and gothic decadence of those films, but otherwise adopts very much the same game plan vis-à-vis submerging us headfirst in a swirling, irrational nightmare of nonsense that seems purpose-built to break the brains of anyone actually approaching this thing as an ostensibly solvable whodunit.

Beginning from a relatively linear (if extremely sketchy) starting point that sees an idle Tuscan playboy (Robert Hoffman) ditching his wife(?) at a yacht party in order to embark on a tryst with mystery girl Suzy Kendall, ‘Spasmo’ proceeds to bombard our poor, free-lovin’ hero with such a relentless profusion of inexplicable events and breakneck changes of plan that I spent the first hour or so convinced that there was *no way on earth* Lenzi could actually tie all this stuff up into a single, coherent plotline – especially given that Hoffman consistently responds to these challenges with some of the worst decision-making I’ve ever witnessed from a horror/thriller protagonist. (Yes, the “no, don’t do that – you idiot!” guy at your hypothetical viewing party will likely need some extra blood pressure pills to get through this one.)

Nonetheless though, ‘Spasmo’ pulls off a series of shock revelations in its final act (including a fine example of the ever popular Ivan Rassimov-ex-machina) that kind of, sort of, just about leaves things making a flimsy sort of sense… assuming you don’t start factoring issues of believable human behavior or psychology into your calculations.

What I liked most of all about ‘Spasmo’ though is that it is completely, unmistakably a giallo, flyin’ its flag without shame. Where other directors opted to downplay the more clichéd aspects of the genre or to turn them on their head as things drifted toward self-parody once Argento and Martino had nailed down the template for all time in the early ‘70s, Lenzi instead seems happy to fully embrace the genre’s trademark aesthetic, to the extent that, were someone to come out of the blue and ask me “so, these giallo movies, what are they all about then?”, I’d be tempted to screen ‘Spasmo’ for them in preference to the work of any of the genre’s more celebrated proponents.

Though Lenzi may lack the technical flair and strength of vision possessed by said proponents, as an unpretentious, base level example of everything that made the emergence of this genre in this particular time and place such wonderful fun, ‘Spasmo’ does the business just perfectly.

Along with the aforementioned plot convulsions, the film’s exquisite atmosphere of shabby-genteel ‘70s Mediterranean languor remains unmatched this side of a contemporary Jess Franco flick, at least in my movie library. Fashions, accoutrements and interior décor are as beautifully garish as could be hoped for (at one point, a fugitive Hoffman returns to the scene of a crime because he left his medallion behind), and Lenzi & co make use of some absolutely fantastic shooting locations too -- most notably, a refurbished cliff-top watchtower whose atmospheric environs add a welcome frisson of gothic horror-ish isolation to the movie’s middle half hour, helping stave off any hint of boredom as the plotting loops the loop like an out of control bi-plane.

Though one imagines he probably didn’t exactly bring his A-game to the studio for this one, Ennio Morricone’s score nonetheless adds greatly to proceedings too, as the maestro comes through with some choice moments of slithering funk and atonal electronic freakery, in the rare breaks between incessant repetitions of his obligatory harpsichord-blasting main theme – all adding up to a kind of giddily familiar “mega-mix” package of the sort of material he provided to more celebrated gialli in the past.

One reason for ‘Spasmo’s low critical standing amongst fans may be its perplexing lack of any particularly memorable or blood-thirsty murder set-pieces, but, much as you’d expect with good ol’ Umberto at the helm, violent incident is nonetheless both frequent and jolting – particularly when he begins to whip things up into a more frenzied pace in the film’s final act, instigating bouts of aggressive jump cut montages and ‘am-I-the-one-going-crazy?’ unreliable narrator flashback stuff that recalls the excesses of Renato Polselli’s aptly named ‘Delirium’ (1972).

Factor in the somewhat surrealistic sub-plot that sees somebody lurking about in the dark leaving grotesquely mutilated latex sex dolls in Hoffman’s wake, and a sinister hired killer who seems to have been made up to look almost exactly like Dario Argento (one of several bits of wacky, intentional humour I think you can identify ‘Spasmo’, should you have a mind to), and I would invite readers to pause and ask themselves: really,  what more could one ask of a rip-roaring second tier giallo…?

Basically, the whole thing feels rather like staggering about on some treacherous Tuscan cliffs late at night in the company of strangers whilst ripped on several bottles of bootleg Chianti - and that, needless to say, is a feeling that this blog can wholeheartedly recommend. Aside from the fact that the film’s producers seem to have struck a product placement deal with Johnny Walker instead of J&B (heresy!), this is ninety minutes of pure giallo nirvana so far as I’m concerned.

* Without wishing to interrupt the main text with such concerns, I would like to make clear that this positive assessment of Umberto Lenzi’s work does not extend to his early ‘80s cannibal films, and the deeply regrettable animal cruelty featured within them. Just for the record.
Posted by Ben at 17:02

Sexual perversity, abnormal psychology and misogyny formed the core of the giallos and Spasmo is an entry that's overloaded with those themes yet subdued visually. Suzy Kendall added some giallo cache due to her roles in Bird With The Crystal Plumage, Torso and even a British "gialli," In The Devil's Garden. I didn't predict that penultimate scene with her and Hoffman when I first saw the film. Lenzi's script made this less formulaic than other gialli (no black gloved murderer) but the cinematography is straightforward; only at the end do we see some flashbacks that clear up the story. The use of mannequins as sexual fetishes and surrogates leads back to Mario Bava and, of all directors, John Huston, in the hard-to-find Freud. Hoffman is as good as any giallo leading man and Rassimov as his brother is excellent physical casting. I actually prefer these lesser gialli (What Are Those Strange Drops of Blood on Jennifer's Body, the Luciano Ercoli series and Sergio Martinos' films) to Dario Argento's better made films with his bravura technical flourishes and use of advanced photographic technology.

Thanks for sharing your thoughts Elliot - that's a really interesting take on thing.

Up to the late '70s, I'd probably take Martino over Argento too actually (although after that, Dario wins me over big time with 'Suspira', 'Inferno' etc), and I'm looking forward to getting around to less-celebrated efforts such as Ercoli's films, Lenzi's other gialli etc soon...

Ercoli made several solid gialli with his wife Susan Scott / Nieves Navarro. I actually bought the DVD set instead of renting. One giallo I just can't get into is The Red Queen Kills Seven Times. I can never get through it. I lost it with Dario after The Mother of Tears. His Dracula was awful. He should stay away from the CGI.