To some extent, my fondness for the second of Michio Yamamoto’s trilogy of low-budget Toho gothic horror films stems simply from its name. No, not the original Japanese title, which translates as something like ‘Cursed House: Bloodthirsty Eyes’, but the accidental genius of the English release title. LAKE OF DRACULA.(1) Fantastic. Not a lake belonging to Dracula, you understand – a lake OF Dracula. Pure essence of Dracula, sitting there glittering in the moonlight. I love it.

I was even planning to name my long-delayed horror-ish psyche/noise/drone type music project Lake of Dracula, in the hope that I might be inspired to realise that wonderful concept in audio form (it’s certainly a pretty perfect description of the sound I’m aspiring to create). Sadly though, I’m not alone in my infatuation with the title, and there is already a Lake of Dracula who released a couple of records a few years back. (Damn you, Weasel Walter!)

Anyway, needless to say, my own conception of the Lake of Dracula is not really one that you could claim to find in Yamamoto’s film, in which the titular lake plays an incidental role at best. In fact, although I’m kind of oddly fixated with the film and have watched it a number of times, it’s difficult for me to really say where it’s appeal lies, beyond the fact that it’s a Western-style vampire movie made in Japan (and you don’t see one of those everyday).

For anyone acquainted with the conventions of Euro-American horror films, ‘Lake..’ initially appears to be a blandly generic example of the form, short on original ideas and suffering from an absolutely chronic lack of narrative momentum. Even by the standards of low budget horror, it is excruciatingly slow-moving and cheaply realised, and yet…. something about it just keeps pulling me back in. Euro-horror fans will get where I’m coming from, I hope.

Probably the film’s most interesting aspect, from a high-minded film crit POV at least, is its flashback structure and vague investigation of repressed memories, primal imagery and the like. As such, we open with the sight of a young girl named Akiko, apparently alone, playing with her dog on a rocky stretch of seashore. Her dog, Leo, suddenly runs away as if summoned by some unknown force, and she follows him through a dark cave, and subsequently to the door of a foreboding, Western-style mansion (the same one used in Yamamoto’s earlier Fear of the Ghost-House: Bloodthirsty Doll, if anyone’s keeping score). Following her dog into the entrance hall, she encounters, in quick succession, a lumbering, zombie-like old man, a white-faced vampire woman seated at the piano, and - the final horror - Japanese Dracula himself, who appears at the top of the stairs, blood smeared on his lips, his eyes glowing with hypnotic golden light!

From there, we cut to grown up Akiko (Midori Fujita), still accompanied by a dog named Leo (a new one), who is now a painter, living in a house of the shore of a remote lake. A timid and rather nervous young woman, she has been tormented by nightmares ever since the aforementioned incident in her childhood, and attempts to exorcise these bad memories through a series of disturbing abstract canvas – each depicting the same giant, burning eye.

Amongst other things, Akiko acts as an unofficial ‘teacher’ to an apparently sub-normal man named Kyusaku who works at a nearby boat-hire centre. It is to this lake-side establishment that a mysterious white marble coffin is one day delivered, borne by a sullen and uncommunicative driver, who dumps it and disappears without a word. The name inscribed on the side of this unrequested coffin..? Well, you can probably guess. Quite why the scion of Japan’s own branch of the Dracula dynasty suddenly felt the need to relocate to a wooden boat-house is an issue that is never really addressed, but in keeping with the dream-logic that operates throughout this film, we can only assume he is being drawn toward the soul of the young girl who stumbled into his domain all those year ago.. or vice versa.

Soon of course, the Count arises, and Kyusaku falls victim to his influence, becoming a kind of lumbering, mindless Renfield-like figure. In a further echo of the original Stoker story, Dracula next sets his sights of Akiko’s sister Natsuko (Sanae Emi), who is staying with her, and soon our heroine’s only defence against the gradual onset of evil that seems to be overtaking her is her boyfriend Saeki (Osahide Takahashi) – a dedicated doctor and steadfast man of reason, who at first assumes she’s just going a bit neurotic, but is subsequently convinced of the danger when he ends up treating another vampire victim at his surgery.

And… that’s about it really. The main problem with ‘Lake of Dracula’ in conventional terms is that the story barely moves forward at all, with almost no significant development taking place through the majority of the film’s running time. Within the first fifteen minutes, Dracula has pitched up at the boathouse and begun menacing Akiko and her associates… and basically he just continues to do that for about the next hour. A few supporting characters meet sticky ends along the way, people move from one place to another, but basically, as far as the central drive of the story goes, things remain in a state of near unbearable stasis for absolutely ages, until Akiko and Saeki eventually manage to follow some clues back to the mansion where her traumatic childhood experience took place, where, somewhat unexpectedly, they encounter the corpse of Dracula’s father, whose journal is used to lay some heavy exposition on us, introducing some interesting new quirks in vampire genealogy, and explaining how Japan ended up with it’s very own Count Dracula.

This sense of narrative stasis is scarcely helped by the disinterested, sleep-walking quality that characterises most of the performances in the film, a circumstance that could easily be ascribed simply to a cast of underpaid actors doing the bare minimum with a bland, undercooked script (as was the case with ‘Bloodthirsty Doll’), except that in this case it all actually fits in quite well with the general somnambulant, vaguely hypnotic vibe of the film.

One performer who does actually puts some enthusiasm into his role is, fittingly, Dracula himself, portrayed with admirable gusto by Shin Kishida, a writer and actor who worked on both sides of the camera on numerous Toho samurai movies. Apparently Kishida was a big sci-fi and horror fan, and was over the moon at being offered the chance to become Japan’s answer to Christopher Lee.(2) Though he’s not really the perfect physical type for Dracula (the cadaverous Ko Nishimura, as seen in The Living Skeleton, Kurasawa’s ‘The Bad Sleep Well’ and Koreyoshi Kurahara’s ‘Intimidation’, would have been my dream casting choice), he nonetheless gives it his all, in particular unleashing some of the most blood-curdlingly horrible vampire shrieks and death-rattles in cinema history. Allied with some pretty gnarly make-up effects, his inevitable disintegration scene makes for a pretty intense finale.(3)

Largely though, ‘Lake..’ remains the kind of film that seems to take place in a sort of dream-state. Not a terribly good or interesting dream-state perhaps, but a dream all the same – a fuzzy, indefinitely focused, inescapable sort of space, in which people seem to speak in slow motion and move as if wading through treacle, slaves to some alien logic that never quite adds up to anything the waking mind could relate to.

The role that memory plays in the film, and particularly the idea of the central character reliving the trauma of encountering a vampire when she was a child through dreams and hypnosis, reminds me strongly of Jean Rollin’s masterpiece ‘Lips of Blood’(4), and of course opens the film up to all kinds of thematic interpretations that, even if this film’s narrative is too simplistic and opaque to ever really engage with them, are nonetheless conveyed by Yamamoto’s directorial style, which succeeds in dragging us deep into an atmosphere of odd psychological gloop.

As in ‘Bloodthirsty Doll’, Yamamoto reveals himself to be a quietly effective cinematic stylist here, in spite of the clunky material and soporific acting, making good use of the usual Japanese widescreen aspect ratio as he cuts between extreme close-ups and distant long-shots, lodging the film’s central images in our brain like fragments of recovered memories, meaning that, whether by accident of design, elements of ‘Lake of Dracula’ stay with me long after the highlights of many ostensibly ‘better’ films have faded.

From the blood-red skies hanging over the jagged ocean shore where young Akiko plays in the film’s opening flashback, to the tunnel-like cave through which she pursues her dog to the vampire’s liar, functioning like a gateway to another world; from the extreme close-up of Dracula’s glowing yellow eye, mirroring the landscape shots of sun setting over the lake to the queasy, poorly staged terror of the grown up Akiko finding her dog dead amid the long grass, then immediately being attacked by the previously trustworthy Kyusaku… it’s all the kind of thing tailor-made to lurk in the back of your brain indefinitely.

In some ways in fact, the film really IS a “Lake of Dracula” – a stagnant, ever-drifting pool of unsettling imagery and sluggish, hypnotic movement that could potentially unspool forever before the tired eyes of those lost within it, an endlessly repeating landscape of Akiko’s internalised paranoid terror, with concerns of plot and forward momentum relegated to the corners, like glimpses of reality breaking through some thick, schizophrenic fug. Care for a swim..? 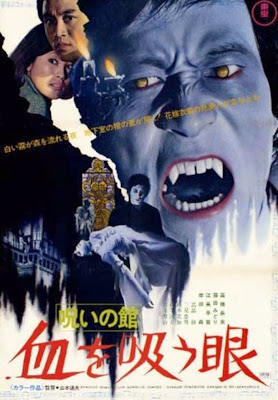 (1)Yes, these films did receive an American theatrical release, surprisingly; insofar as I can tell, all three hit the streets in 1973 as a triple package distributed by Toho’s US distribution wing.

(2)Info taken from a text essay accompanying the 2002 UK DVD of ‘Lake of Dracula’ from ArtsMagic. Picture quality is as dreadful as their ‘Bloodthirsty Doll’ release, by the way, (I’ve cleaned up the screenshots above a little), but I suppose it was at least nice of ‘em to throw in a few extras.

(3)VERY PREDICTABLE SPOILER ALERT, but just as an aside, something that really bothers me about ‘Lake of Dracula’ is that during the finale, when the vampire is staked by a big piece of wood, it’s clearly not anywhere near his heart! It’s, like, in his belly or something. I mean, c’mon! Still, I guess that’s what you get when you entrust these things to a country that doesn’t really do vampires very often… maybe they’ll have got the gist of it by the time we get to the final entry in Yamamoto’s vampire trilogy.

(4) Could Rollin have seen ‘Lake of Dracula’..? I suppose it’s not impossible, but as usual, I don’t feel the similarity between the two films is liable to be much more than a coincidence. I will go out on a limb and say that I think Rollin would have at least LIKED ‘Lake of Dracula’, however.