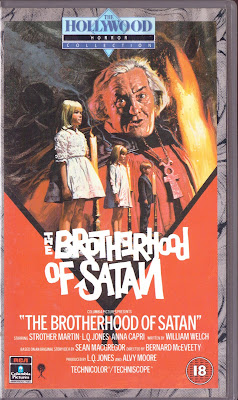 When I reviewed lovably eccentric Louisiana witchcraft movie The Witchmaker a few years back (mental note: gotta get a watchable copy of that some time), I failed to make the connection between producer L.Q. Jones and the gaunt cowboy actor of the same name who turns up in most of Sam Peckinpah’s ‘60s/’70s films. Partly I just wasn’t paying that much attention, and partly it just seems kinda unlikely, y’know? Well, turns out that it actually was that same L.Q. Jones, and that following the success(?) of his first venture into low budget occult horror, he and co-producer/actor Alvy Moore actually took a second shot at the genre, with Jones persuading his frequent on-screen partner Strother Martin to co-star in 1971’s Texas-lensed ‘The Brotherhood of Satan’. (You’ll remember the pair as the hapless bounty hunters in ‘The Wild Bunch’, and the varmints who leave Jason Robards to die in the desert in ‘The Ballad of Cable Hogue’.)

Regrettably, what they came up with is a dull and rather mystifying stab at the early 70s “Satanic panic” sub-genre, mostly lacking the self-contained charm of its predecessor. But, it is at least a lot stranger than the already fairly strange 'Witchmaker’, and that’s gotta count for something.

What manner of madness is this, you may find yourself asking from the outset, as the film opens with motion-blurred close-ups of tank tracks crushing piles of metal, accompanied by grinding machine noise and occasional sounds of people screaming in terror, intercut with shots of a wind up toy tank (shades of ‘Astro Zombies’). When this… whatever it is.. has been completed, we see a small boy walking away from a pile of smouldering wreckage. Climbing a hill, he meets a couple of other children, including a girl who begins to brightly glow in supernatural fashion – cue animated credits sequence.

After that, we’re introduced to a happy family who are having a nice day out near a.. lake? I guess it’s a lake. Driving off, they travel along a desert road, where they discover the crushed car seen in the prologue. Heading to a nearby town to report this rather extreme ‘accident’, they meet with an inexplicably hostile reception, as the cops immediately rough up and interrogate the father, before a crowd of locals descend upon their car in a kind of mass rage. “You took them away from us!”, a man who looks rather like Fidel Castro yells despairingly as the family turn tail and get the hell out of there.

Strange stuff this. Definitely uneasy. Not at all a good end to a day at the lake. But yes – unease, unease, unease seems to be prolific TV director Bernard McEveety’s bag, his apparent disdain for establishing shots and clear transitions leaving us with an uncomfortable mixture of blurry, abstract close ups and cramped, medium shot dialogue scenes that never really settles down into any kind of sensible rhythm.

The actual storyline of the film, once we’ve figured it out, is predictable bordering on tedious – a coven of elderly citizens are using Satanic powers to prevent local people from leaving town, and hypnotising/stealing their children one by one, so that they can transfer their spirits from the older bodies to the younger and continue their unholy existence. Ho hum. A pretty straight-down-the-line set up for horror fans, and unfortunately one that veers closer to the oh-so-‘70s threat-to-the-family vibe of ‘The Stepford Wives’ or Bert I. Gordon’s achingly dull ‘Necromancy’ than to the more decadent, whacked out brand of Satanism I tend to favour.

But linear though this plot may be, it becomes unbearably confusing simply due to the film’s refusal (or inability?) to really communicate anything to us very effectively. Hard to explain quite what I mean, but basically this is the kind of film where at any point characters we’ve never seen before can start wondering around, talking about stuff we have no interest in; in which we’re never quite sure where or why a certain scene is happening, or what pertinent information we should take away from it. Whether the result of incompetent editing, heavy cutting or reliance on incomplete footage, or just an admirable (if doomed) attempt to avoid exposition-heavy dialogue, the result is that we’re often simply lost.

I know at this point you’re probably thinking “great, I love movies like that”, but the kicker here is that not a great deal happens to make any of this narrative heavy lifting worthwhile. Despite some moderate outbursts of violence and fright, the whole thing has an inescapable TV movie feel about it, which certainly gels with McEveety’s CV. But imagine a TV movie directed by someone who seems to be looking to Jess Franco as a paragon of narrative efficiency, and you’ll start to get the idea.

Not that the Franco comparison extends much further than that, unfortunately. Certainly Uncle Jess wouldn’t think much of ‘Brotherhood..’s subdued retiree Satanists, led by head cultist Strother Martin, here mustering little of the energy he brought to his western roles as he intones some totally square Satanic litanies (just yr typical “oh Lord Satan..” sorta stuff really). Admittedly, their hideout does have a couple of pretty cool sets (that cobweb-shrouded giant ankh gateway thing is a bit of an eye-opener), and all that business with making hypnotised children stand motionless on marble pillars is pretty peculiar and subliminally disturbing, but… yeah, not much doing really.

In essence I think ‘Brotherhood of Satan’ is a viewing experience very well suited to the pungent charms of this 1989 Parkfield Entertainment VHS (other titles in the “Hollywood Horror Collection” include ‘Torture Garden’, ‘The Mutations’ and ‘Blind Terror’). As well as the coating of nutritious fuzz, adding an extra layer of unearthliness to otherwise mundane imagery, it’s a good one for drifting in and out of sleep to as the VCR wheels whir.

In fact, good advice for watching this one would be… well actually good advice would be to watch something that provides some degree of entertainment value or emotional/intellectual engagement instead. But if say you were to find yourself stuck on some hellish airline where they’re showing this as the inflight movie, taking some sedatives and just letting it roll over you is definitely the way to go.

Yes, watching whilst fully awake would be a mistake. You’d only start asking questions. Why do the elderly Satanists seem to be letting a a young-ish woman join their ranks? Why - possibly as a result of this, possibly not - does one of the elderly women in the coven have to beg for her life before the altar and then stand motionless on a pillar with the kidnapped children whilst the rest of the cult mock her? What’s the reasoning behind giving Strother Martin’s character a ‘real world’ identity as the town’s mild-mannered doctor? (His secret identity as head Satanist is never revealed to the good guys, and he never uses any of the information he’s learned from hanging around with them to modify the plans of his cult - in fact he does bugger all in either of his identities really). Why, after a typically confusing scene in which it is implied that two people have died, do we see our male lead (who wasn’t there) walking shell-shocked through some hellish basement full of body bags as the police question him?

No, best not to worry about any of that. Just wash half a sleeping pill down with a few stiff drinks. As you drift in and out of consciousness, strange pictures will appear, flickering across your mind’s eye, hinting at far stranger mysteries than this the sober surface of ‘The Brotherhood of Satan’ is able to provide.

A woman sinks into an armchair, experiencing some sort of seizure, as her husband(?) sits disinterestedly behind her, reading obscure and/or oddly translated bible verses aloud.

A distraught deputy sheriff chases the dust cloud kicked up by a departing car, waving an orange toy monkey above his head.

These are the building blocks ‘The Brotherhood of Satan’ offers the brave somnambulist. Dare you try to assemble them..? 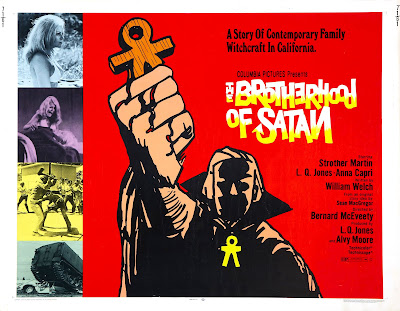 I watched this a few years back and come to think of it, I remember so little about it. I love me some evil old people and if memory serves, that finale is kooky fun, plus the visual design had something going for it. But yes, apparently, it was also quite forgettable!