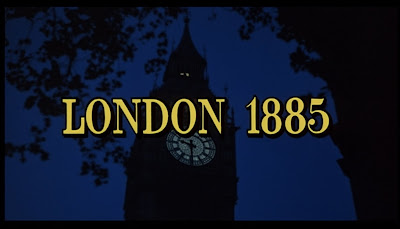 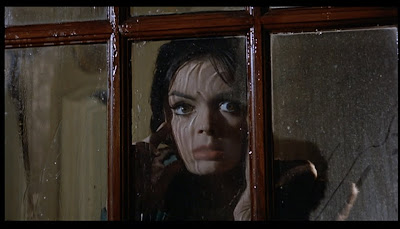 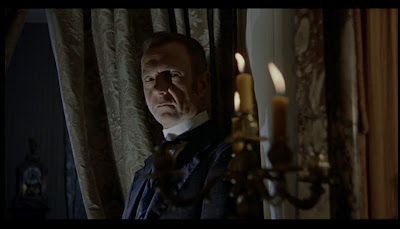 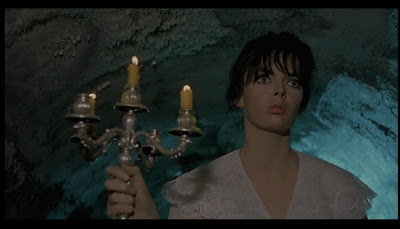 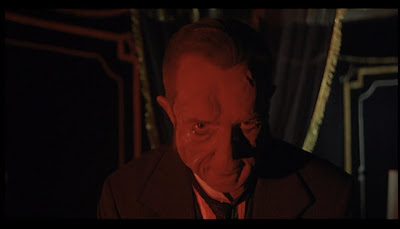 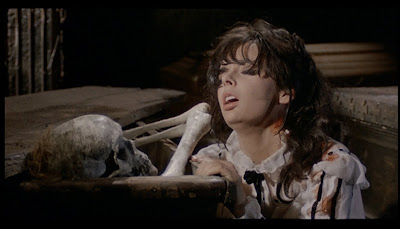 An unusual figure within the pantheon of Italian genre directors, I remember reading somewhere that Riccardo Freda had become ‘independently wealthy’ by the time he took up making horror films in the late ‘50s, with a fifteen year track record of success in the field of peplums (pepla? I dunno..) and historical epics serving to free him from the commercial considerations that defined the work of other Italo-horror directors, leaving him time to carefully consider the relatively few films he made in the genre, with the studios perhaps seeing them as ‘pet projects’ or indulgences from a guy who’d already proved himself a reliable money-maker.

I don’t know how much truth there is in that view of things, but a rare degree of creative forethought and aesthetic conviction can certainly be felt in ‘L’orrible Segreto del Dr. Hichcock’, which stands as one of the real A+ masterpieces of ‘60s gothic cinema. Released in Italian cinemas 50 years ago this month (funnily enough), it is ‘..Dr Hichcock’, more-so even than ‘Black Sunday’ or Corman’s Poe films, that I think subsequent filmmakers came to regard as ‘the template’ as they mined the gothic style into oblivion over the coming decade.

Packed with overbearing baroque imagery and masterfully orchestrated moments of creepitude, the film can certainly boast a full set of genre clichés. Anyone keeping track on a tick sheet can happily strike off the following in the first forty minutes alone:

Rarely though have such familiar elements been as effectively used as they are here. Shooting in technicolor with a wide aspect ratio (I’m not gonna venture into the technical AR talk, but y’know what I mean), Freda creates an incredibly detailed mise en scene within the film’s set-bound interiors, full of dense, dark colours, high ceilings and lavish furnishings that evoke a real sense of shadowed grandeur – a feeling of things lurking in the distance, perpetually unseen beyond the sharp spot-lighting.

Mario Bava had of course worked closely with Freda during the ‘50s (most notably on ‘I Vampiri’ (’56) and ‘Caltiki: the Immortal Monster’ (’59)), and it’s hard to believe that the colour gothic aesthetic perfected by Bava in 1963's Whip & The Body wasn’t veeeery heavily influenced by Freda’s film, utilising many of the same techniques (hell, maybe even some of the same sets – that wrought-iron gate in the crypt looks pretty familiar) to create a similar atmosphere of slow-building tension, borderline supernatural mystery and familial decay.*

Looking further ahead down the influence trail, Freda’s distinctive use here of a POV tracking shot that place us behind the eyes of a mysterious aggressor creeping slowly down glassy, unnaturally lit corridors, followed by close ups of ornate bedroom doorknobs being tested, will have Euro-horror aficionados immediately chorusing “ARGENTO”, and indeed, whether a conscious influence or not, after watching ‘..Dr. Hichcock’ it’s easy to interpret certain shots in ‘Deep Red’ and ‘Suspiria’ as direct nods to Freda.

For all that ‘..Dr. Hichcock’ plays on, and helps create, horror cliché though, there is far more going on here than a mere parade of gothic hi-jinks. To a greater extent than any of his contemporaries, Freda seems determined to explore the deeper psychological aspects of the gothic formula. Drawing (somewhat inevitably) on Franju’s Les Yeux Sans Visage, and pre-empting such psychoanalytical headfucks as Hammer’s ‘Demons of the Mind’, ‘..Dr. Hichcock’s web of sex, surgery and psychiatric dysfunction invests the film with a disturbing, modernist feel that sits oddly with its antiquated visual aesthetic. Sigmund Freud is even mentioned by name at one point, and the whole film is suffused with a sense of neurotic unease that almost bears comparison to a David Cronenberg film.

Whereas most gothic horrors by necessity employ a razor-sharp demarcation of good vs evil, protagonist vs antagonist, for a significant portion of ‘..Dr. Hichcock’ we’re left in uncertainty as to what we should be more worried about: the doctor’s coldness, strange behaviour and apparent duplicity, or his wife’s raging paranoia, unfounded jealousy and unstable grip on reality. In most movies furnished with thunder-claps, decaying gothic piles and sinister scientists, our sympathy with the frightened, loveless bride would be a foregone conclusion. But here, as Freda’s careful manipulation of the film’s emotional drift emphasises the tension between Robert Flemyng’s formal impassivity and Barbara Steele’s harrowing, near-hysterical performance, we’re often genuinely unsure whose point of view we can trust. No one’s, presumably. As in a Cronenberg or Franju film, chances are there’s something pretty off-balance going on with everyone here. Rather than a victim / aggressor scenario, what we’re witnessing could merely be a car crash between incompatible dysfunctions, and we’d be well-advised to keep a close eye on the whole lot of ‘em.

The droning strings and staccato piano of Roman Vlad’s accomplished, Hermann-esque score further heightens the atmosphere of unease, whilst Freda’s compositions constantly exploit the distortions and framing effects of gratings, bars, mirrors and - his personal favourite – having his characters stare through grimy, rain-soaked windows, emphasising a sense of enclosure that reaches its natural conclusion in the genuinely horrifying sequence in which Steele awakes to find herself scratching against the picture window of a sealed coffin.

In one of her few colour appearances and probably her best ever leading role, Barbara Steele is, needless to say, stunning, and it was hard work not to fill all six of my allotted spaces for screengrabs at the top of this review with some of the many, many beautifully realised shots of her looking frightened. Her actual performance here makes just as much of an impression as her unmistakable visual presence though – speaking her own lines in Italian rather than relying on dubbing, she’s as convincing a nerve-shattered gothic heroine as you could possibly wish for. Harriot Medin meanwhile does what she does best as the sinister housekeeper (see footnore below), and if a casual viewer could read Robert Flemyng’s performance as the eponymous doctor as simply being wooden, what he is actually putting across is a very deliberate, emotionless exterior that plays directly into his character’s troubled persona, allowing him to accumulate menace as the movie progresses.

And as the the good doctor’s ’orrible segreto itself, well, let’s just say that, just like Cronenberg’s best works, this is a film that revels in going *just a bit further than is comfortable* with its unsettling ideas in a way that, whilst never remotely graphic, must have been truly scandalous in ’62 and remains pretty iffy territory for a general audience today. If you’ve encountered any other writing about this film you’ll know what’s what, and once you begin watching it you’ll get the drift pretty quickly, but hey - it still says ‘secret’ in the title, so for the moment my lips are sealed.

More often written about over the years than actually seen, ‘..Dr. Hichcock’ has suffered from a pretty spotty release history in the DVD era (allegedly due to the influence of a less than co-operative rights holder), and remains effectively unavailable in officially sanctioned, English-friendly form. This is extremely regrettable, as it’s a really extraordinary film that every discerning horror fan deserves to see at some point. Thankfully though, the bootleggers at least have come through for us here, and a pretty decent looking print of the original theatrical version (sourced from an Italian TV broadcast) is currently doing the rounds, with workable English subs attached. So until such a point as an official release emerges… you know which doors to knock upon, I’m sure.

*There are a number of more concrete connections between the two films as well of course: both are based on screenplays by the ubiquitous Ernesto Gastaldi, and ‘Whip..’ even re-casts Harriet Medin as pretty much the same character she plays in ‘..Dr. Hichcock’. Factor in her unforgettable appearance in the ‘Drop of Water’ segment of ‘Black Sabbath’ and her appearance as ANOTHER sinister housekeeper in ‘..Dr. Hichcock’s follow-up ‘The Ghost’ and Medin definitely seems to have been the Italian gothic horror director’s creepy old lady of choice, although apparently she didn’t have much trouble overcoming such typecasting, going on to a long and varied transatlantic career that saw her appearing in everything from ‘La Dolce Vita’ to ‘Deathrace 2000’ to ‘The Terminator’(!).

Great review, and the stunning screen-grabs remind me that I really must upgrade my barely-watchable grey-market disc of this. (Retitled 'Raptus', and badly cut about, as I understand it.) I'm baffled as to why anyone would want to sit on the rights to a legendary film like this when people would pay good money for a legitimate reissue.

Yeah, who knows? The usual story with these things is that they're holding out for a figure that no potential distributors could possibly afford...

The version I've got is well worth tracing down anyway - seems to be complete, and I'm really surprised at how good it looks.

It's hard to believe that this sexually perverse nightmare was shown as a Saturday kiddie matinee with another sexually deviant horror The Awful Dr. Orloff. I saw them at the Culver Theater in Brooklyn, New York with a hundred other kids. I'm sure the parents had no clue what they were dropping their children off to see.

Must have left a lot of confused and unsettled kids in its wake...

It seems like that sorta thing happened a lot in the '60s though - parents and theatre owners assuming horror films were going to be light-hearted trash ala the '40s Monograma and Universal movies, when actually they were moving towards far more grown up and disturbing territory... reminds me of Leonard Maltin's famous piece about seeing 'Night of the Living Dead' in a cinema full of absolutely terrified children.