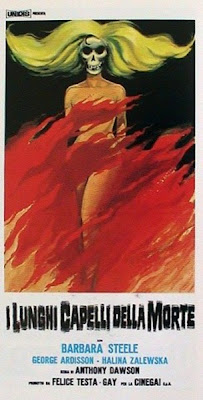 One of the more obscure items in Barbara Steele’s catalogue of Italian gothics, it’s easy to see why Antonio Margheriti’s supremely named ‘Long Hair of Death’ (god bless those literally translated titles) has ended up being somewhat overlooked in the history of such things. Appearing towards the end of the era in which these comparatively bloodless, black & white horror flicks were considered commercially viable (not that it stopped Steele ploughing through another four entries in the cycle before packing it in in ’66), ‘Long Hair..’ is a game of two halves really – uninspired through much of its run time, the film’s best sequences nonetheless contain some of the most powerful moments ever realised in Italian gothic horror.

Things certainly start off all guns blazin’, as we emerge from the opening credits into a vague, late-medieval mid-European setting (which at least makes a change from the vague, Victorian mid-European settings of most of these things), where condemned witch Adele Karnstein is being burned alive in the town square as her distraught and uncomprehending young daughter looks on. Meanwhile, Adele’s older daughter Helen (Steele) finds herself in the bed chamber of the local feudal lord, reluctantly submitting to his lecherous advances in a last-ditch attempt to delay her mother’s execution, as he assures her that his subordinates wouldn’t dare commence the burning without his presence, even as the flames take hold. 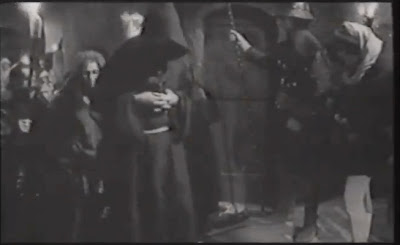 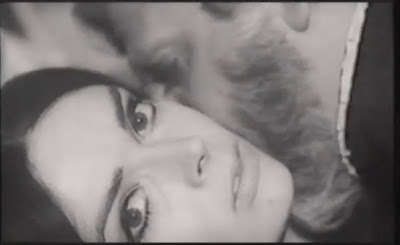 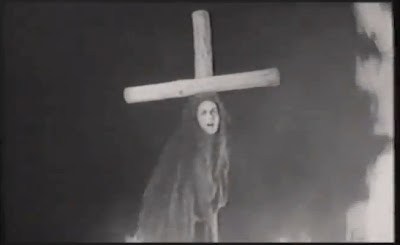 An extraordinarily bleak scenario for all concerned, with Margheriti's cross-cutting between the excruciating death of a mother and the rape of her daughter by a treacherous aristocrat leaving us in little doubt as to where the film's sympathies lie re: the old 'suspected witches vs church & state' debate, prefiguring the real-world hypocrisies dramatised by Michael Reeves’ ‘Witchfinder General’ and the raft of witchhunter-sploitation (if you will) movies that followed in the wake of Ken Russell’s ‘The Devils’ by a number of years.

This in itself is pretty unusual – I could be wrong, but I think ‘Long Hair..’ is the only Italian horror movie I’ve ever seen in which the ‘witches’ are presented as sympathetic victims rather than satanic evildoers – and Margheriti’s decision to hit us with such gruelling human drama is brave indeed, dredging up some slightly more visceral emotions than we’re used to experiencing in gothic horror movies, with their rather more emblematic expressions of ‘mourning’ and ‘despair’.

(In fact, as an aside, it’s interesting to note how easily ‘Long Hair of Death’ could be read as a feminist horror film, if admittedly on a rather shallow level. Throughout the film, the evils of patriarchal society are wheeled out in the form of sexual exploitation, forced marriage, domestic confinement and the use of innocent women as scapegoats for male crime. And when the Karnstein sisters eventually return to wreak their vengeance (hope I’m not giving too much away here), the implied collaboration of the castle’s taciturn matron/housekeeper character in their plans points not just to a personal or familial revenge, but to an organised cabal of women striking back against their oppressors. Not exactly PHD level stuff I’ll grant you, but interesting food for thought in the midst of the ultra-masculine Italian film industry, no?) 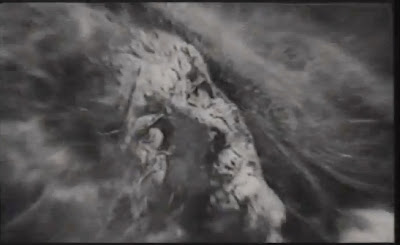 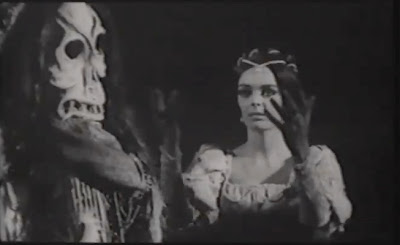 Anyway, getting back on track, the production design in this opening sequence is pretty stunning too. Bypassing the traditional ‘tied to the stake’ burning, the execution sees Adele confined within a kind of makeshift maze of burning hay bales, forcing her to flee in vain from the flames begging for mercy, and eventually to voluntarily climb the crucifix which acts as a central pillar, from whence the crowd can clearly witness her gruesome demise. Imaginative touches like this, along with the solemn hooded monks, iron-masked soldiers etc, lend the scene a disturbing sense of brutal medievalism, culminating with a beautifully tragic shot of Steele cradling a handful of ashes from the burnt out pyre, as the blackened crucifix looms above her, and the dead woman’s voiceover pledges supernatural vengeance. Carlo Rustehelli’s stately, genuinely haunting score undoubtedly helps add poignancy here too - he had scored Bava’s ‘Whip And The Body’ the previous year, and his work here is similarly subtle and effective, featuring only occasional theremin abuse. 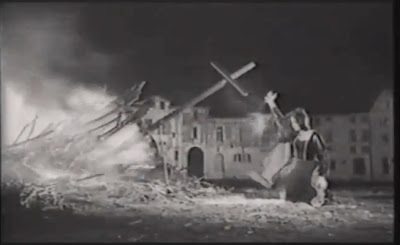 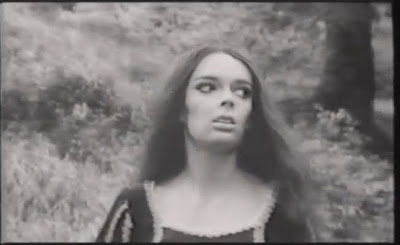 Sadly, the very next scene sees the lustful lord ambushing Barbara in a remote stretch of countryside and unceremoniously hurling her off a bridge into a watery grave, after which the film pretty much follows suit, largely devolving into a stagey, poorly written melodrama with witchery and vengeance entirely forgotten. All verve and character seems to vanish from the direction and cinematography, and the remaining cast stride around a handful of shoddy interior sets (the crypt is ok, but I’ve seen better) like they’re killing time in an am-dram Shakespeare production.

And needless to say, whilst it may cop a riff or two from Macbeth, the drama that proceeds to unfold is far from Shakespearean in stature;

Leaping forward a few years, we’re reintroduced to the younger daughter we saw weeping at the execution – now an indentured servant at the castle – who has come of age in the shape of Halina Zalewska. As you might well expect, Elizabeth (for that is her name) is a rather sullen and troubled young woman who doesn’t really appreciate the crude advances of the Lord’s boorish son Kurt (the distinctly Shatner-esque George Ardisson), who had smugly presided over her mother’s execution. You’d think he might have at least realised that wasn’t an ideal basis from which to build a relationship, but then, he is a complete arse, so who knows.

Things do perk up briefly for another superb gothic set-piece in which Barbara Steele returns from the grave. Flinging open the doors of the family chapel amid a howling thunderstorm as the pastor conducts a plague mass based around the Book of Revelation, her appearance inflicts a fatal heart attack upon the by now elderly and guilt-ridden Lord, who dies clutching a ring he stole from her mother’s corpse. I mean, beat that for yr gothic atmosphere! Amazing! 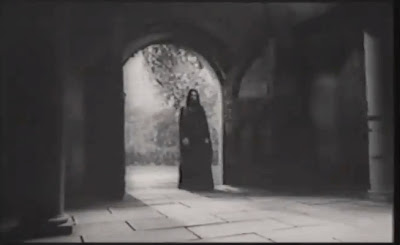 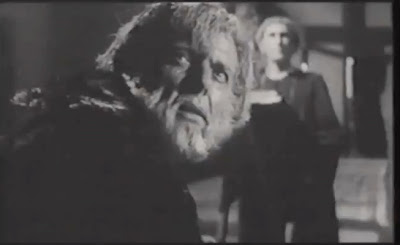 After that though it’s back to the grind, as Barbara announces herself to be not an avenging spirit of the past, but Mary, a traveller marooned at the castle by the storm and fearful of continuing across hostile countryside. She swiftly sets her sights on seducing Kurt and… well let’s just cut to the chase and say that the major problem with the next thirty or forty minutes of the film (aside from the fact that nothing particularly cool or interesting happens) is that the previously established motivations of both our female leads seems to have been completely forgotten, whilst Kurt, who never had much motivation in the first place beyond being evil, just moons around like a goon. Elizabeth, who hates Kurt and was forced into marriage with him against her will, now suddenly seems to be desperately in love with him, and Barbara, or Mary, or whoever, seems all too happy to act as the happy-go-lucky femme fatale coming between them, with no hint as to what the hell she’s actually trying to achieve re: the whole returning from the grave thing.

Doubtless this was all wrought in an attempt to create a sense of mystery, and it’s all sorted out nicely in the big reveal at the end, but prior to that it’s a case of Bad Writing 101, resulting merely in confusion and disengagement from the narrative, as we assume one of those lazy-ass Italian scriptwriters was sleeping on the job again and just shoved in a bunch of pages from a different movie in the hope no one would notice. 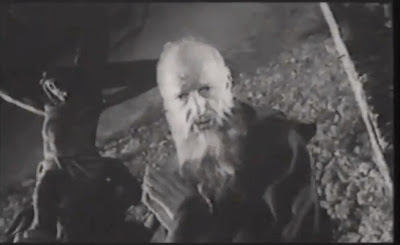 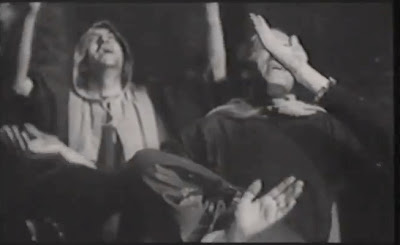 It’s hard to overstate how dreary and muddled this middle section of ‘Long Hair of Death’ is, but things do at least rally for a brilliantly macabre finale that seems to eerily prefigure ‘The Wicker Man’ (pretty forward-looking film this, all things considered). And despite the stodge, the accumulated power built up during the good scenes gives the film an exquisitely foreboding aura that’s hard to shake, a feeling that is only enhanced by the apocalyptic shadow of the black death hanging over proceedings, and the accompanying sense of cloying medieval darkness that takes hold whenever the camera ventures out into the plague-ridden streets (a touch presumably inspired by Corman’s ‘Masque of the Red Death’, released six months earlier). Another interesting note is that, between the burning crucifix in the opening, the scene in the chapel, the severe bearded priests and the sight of hooded monks dragging plague victims from their homes, the film is absolutely drenched in oppressive, negative images of Christianity that must have carried particularly blood-curdling resonance for audiences in Italy.

If Margheriti had managed to keep up the momentum of ‘Long Hair of Death’s best scenes throughout, it would have been an unqualified masterpiece. As it is, connoisseurs of the Italian gothic will definitely want to check it out for its standout sequences, oddly radical political undertones and overall atmosphere - and Barbara Steele fans will certainly appreciate her relatively large amount of screentime - but newcomers to the sub-genre would be well-advised to start elsewhere. 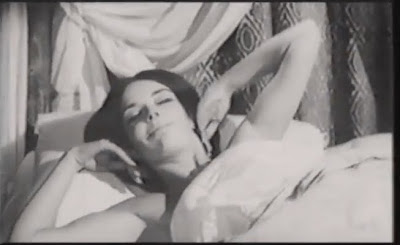 Presumably a public domain item, 'Long Hair of Death' can be viewed in its entirety on Youtube.
Posted by Ben at 21:19

Great review, I've been meaning to pick this up for a while - that title! - and, caveats aside, I'll certainly be grabbing it at the earliest opportunity.

Do you have any information in which location the movie was made? The castle looked oddly familiar to my wife and she's adamant that she has seen it before in similar genre films.

Hi Goswinus - sorry for the delay in replying to your comment! So, umm, in short, no, I've done a bit of search around and basically have idea which locations were used for 'Long Hair of Death' - a pity, as it does look like one that may have popped up in some other movies.

I'd love to be able to consult a directory of castles and such like used in European horror films... putting one together would make for a great road trip / research project, I'm sure...