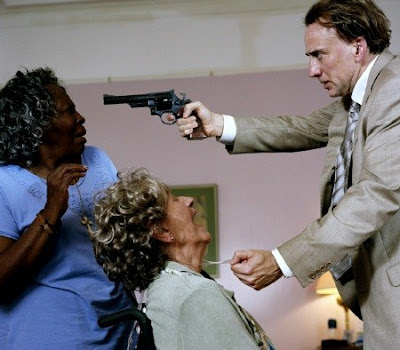 Ok, so, not a full review here, but I’m just gonna write a few paragraphs to let you know that I went to a preview screening of Werner Herzog’s “Bad Lieutenant” a couple of weeks ago (yeah, I know it’s been out in the States for a while, but it’s released in this country this week I think), and, well…. good grief, it absolutely blindsided me. Probably the best Hollywood film I’ve seen in years. And I’m not just saying that because it’s directed by some legendary genius German guy either – I mean, it’s actually more action-packed and tightly plotted and characterful and above all funny than anything the folks in LA who are supposed to specialise in such hearty fare seem to have been able to manage of recent.

I went to the screening on a whim, mainly because I was interested in seeing why a defiantly independent director like Herzog would suddenly drop everything and make a cop movie staring Nicholas Cage, and what kind of flawed, oddball movie would emerge from the process. But I certainly wasn’t expecting to enjoy it half as much as I did. Maybe the key here is: I didn’t know it was a comedy. The pre-release publicity for the film has conspicuously failed to make that point clear, and with a high-minded, non-genre director taking on subject matter that touches on crime, corruption, poverty, addiction, prostitution, racism and god only knows what else, screwball shenanigans weren’t exactly what I was expecting. But the fact is, this film is just freakin’ hilarious.

I guess I saw it with a more appreciative crowd than one might find at the local multiplex, but still, people were almost literally rolling in the aisles, applauding between scenes, laughing ‘til they choked – I can’t remember the last time I went to a screening in which the audience shared such a collective “wow, this KICKS ASS” sort of feeling. I think I got a taste of the same experience an audience in the ‘60s might have had, going to see “Dr. Strangelove” for the first time, expecting a dark meditation on the cold war. And if William Finkelstein’s screenplay for “Port of Call” is obviously not on a level with the Kubrick/Southern script (too caught up in it’s generic cop-procedural logic to fully engage with its near-apocalyptic social context, perhaps?), you’ll understand that it’s still the highest possible praise if I say there were at least *moments* in “Bad Lieutenant” that approach the same chilling sane/insane satire.

I was going to say something along the lines of “Werner Herzog is not best known for his sense of humour”, but thinking about it, that’s not quite fair. All the Herzog films I’ve seen have had definite elements of humour, even if they’re sometimes hard to spot. Like David Lynch, I suspect he’s one of those guys whose idea of funny-ness is so outside the norm that things he thinks are a tremendous gas are often missed entirely or just mistaken for bloodyminded weirdness. Tune into the right wavelength whilst watching, say, “Fitzcarraldo” though, and I’m sure you could find yourself in stitches.

And if the humour in “Bad Lieutenant” arises primarily from the script and the extraordinary performances (more of which later), things are only intensified by moments in which Herzog seems to step out from the shadows and burst the film’s bubble of headache-inducing post-CSI faux-realism completely, throwing in outbursts of outright gonzo wackiness so jarring it’s hard to believe the studio let him keep them in the final cut. And the brilliant thing about such zaniness is that it’s so completely contrived; it’s as if Herzog is hopping from foot to foot shouting “comedy, huh? Yes, I can do comedy! Look – I am one real crazy guy!”, whilst everyone else looks on baffled, willing to let The Great Director have his fun with rubber crocodiles and visible boom mics and so forth before they get back to the proper furrowed brow, drained colour stuff.

And in a way, this renders these ‘wacky’ scenes more gut-bustingly funny than they could ever have been if Herzog actually WAS the absurdist funster we know he isn’t… y’know, it’s kinda like the whole glaring inappropriate-ness of them, combined with Herzog’s misfiring enthusiasm for his idea of making a cer-azzy movie…? If you get what I mean..? Anyway, it’s great.

Well assuming you don’t get me, and assuming you could care less what Werner Herzog thinks or does, here is a phrase I never imagined I’d find myself writing for Breakfast In The Ruins: the real reason you should watch this movie is Nicholas Cage.

Now we all know Nicholas Cage has been in some shitty movies recently. Ok, so actually he’s been in a lot of shitty movies over a sustained period of time. In fact, his name may be on the verge of becoming virtually synonymous with shitty movies. To be honest, the only thing he had left in the ‘plus’ column for me before I saw this was his turn in “Wild At Heart” all those years ago. So take it from someone who went in not really giving a damn about the guy: he absolutely knocks it out the fucking park in “Bad Lieutenant”.

I know I’ve already thrown around a lot of superlatives in this review, but he really does turn in one of the greatest comic performances I’ve ever seen in a movie. It’s simply breathtaking. Over the top in all the best possible ways, but never verging into cartoon-ish Johnny Depp territory, Cage bestrides this film as a beserk, tragic colossus, tearing chunks out of his co-stars as his character lurches around through a haze of cocaine psychosis and severe back pain like some crackhead Richard III.

Alternately shuddering with rage and staring desperately into the middle distance as chaos piles up around him and occasionally collapsing into perversely touching moments of sentimental reverie, Cage’s exaggerated mannerisms and inspired line delivery not only succeed in rendering just about every scene laugh-out-loud funny and unpredictable (no mean feat over the space of two solid hours of screen-time), but also in bringing a staggering intensity to the film that I think allows Herzog in turn to raise his game, elevating what could have merely been a cynical black comedy into a magnificent example of one of his trademark one-man-against-the-world epics, operating on the same cosmic scale as his earlier masterpieces, in spite of the frenetic pace and blunt American brutality.

Throughout the film, we’re never sure quite what Cage’s character is trying to achieve or where his sympathies lie, and I don’t think he knows either. Like Herzog’s other quixotic protagonists, he’s just ploughing on tirelessly through obstacles and mental/physical trauma that would lay a lesser man down in a matter of hours, in search of something he won’t even recognise until he hits it headfirst. To make the grindingly obvious comparison, Cage really seems to pick up here where Klaus Kinski left off in the Herzog classics of yore, and if you think a comparison between the two actors is patently absurd, well – wait ‘till you’ve seen this movie, then come back to me.

In fact, whoever you are and whatever you think: just see this movie. I fear “Port of Call” is liable to be one of those films that will miss its true audience in the cinema - Werner’s rubber crocodile moments probably render it a bit too off-beat for mainstream audiences, and its toxic combination of grotesque depravity and moral ambiguity is unlikely to win it many fans in squaresville, but sadly the eyes of the art-house crowd are also liable to glaze over as soon as they get to “Nicholas Cage plays a cop..”.

(I can't help but note that the American posters for the film were universally horrid, going for the full mianstream thriller approach, whereas the European efforts have been slightly rejigged to take the 'critical plaudits / cult hit' route.)

Like “The Big Lebowski” before it though, I predict “Bad Lieutenant” will gain a whole new life on video, as news of its uncanny greatness travels by word of mouth. In fact, I’d put money on its being ranked as a future classic, but until then I guess it’s up to us weirdos to try and ensure it gets some recognition as the astonishing work it is. So please: see it, see it, tell your friends to see it and then see it again with them when they go to see it. It’s worth seeing.

Phew, rave reviews for two newly released films in the space of a week? I’ll have to rename the blog if this carries on...

And shit, that was *quite a few* paragraphs, wasn't it? Sorry.

No, I've not seen that one - sounds fantastic!

I've been slowly trying to make my way through Herzog's films in no particular order, but 'Loch Ness' is now definitely at the top of my list.