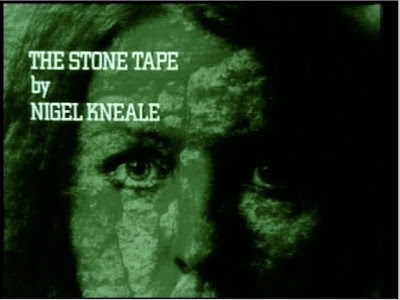 Featuring eerie, abstract visual effects, a cast rendered distantly familiar by bit parts in Dr Who, music and sound effects by the Radiophonic Workshop, and even a plotline directly concerned with the deterioration of analogue recording media and the search for a digital replacement, it was somewhat inevitable that Nigel Kneale’s 1972 teleplay “The Stone Tape” should emerge as a key text of Britain’s current ‘hauntology’ / analogue era nostalgia movement. (Ok, so I suppose I can’t actually prove its position as such, but c’mon, if the Ghost Box contingent haven’t regularly thrilled to a bootleg VHS of this one on a Sunday evening, I’ll eat my hat.)

Kneale should of course need no introduction as one of the most inventive and uncompromising writers to ever work in television, the man behind “The Year of the Sex Olympics” (1968), and the creator of Professor Bernard Quatermass, whose appearances in Kneale-penned BBC TV serials during the ‘50s, and in particular the hugely influential “Quatermass and the Pit” (1958), far outshone his adventures in Hammer’s series of film adaptations (in my opinion at least).

Like “Quatermass and the Pit”, “The Stone Tape” posits a group of characters who find themselves setting out to investigate a rumour-shrouded haunted site through the ruthless application of scientific method. In this case, it’s a team of researchers working for a consumer electronics firm who have been relocated to the until-recently-derelict Taskerlands house, only to find that the cavernous basement room they’ve earmarked for a computer storage facility is already occupied by a screaming spectre. And, also like “Quatermass..”, the story’s masterstroke lays in the way that, rather than diminishing and defanging the supernatural by dragging it into the light of reason, the results of the team’s investigations simply serve to draw us deeper inside the mystery, exposing new ideas that eventually prove weirder and more threatening than an old fashioned ghost story could ever be. 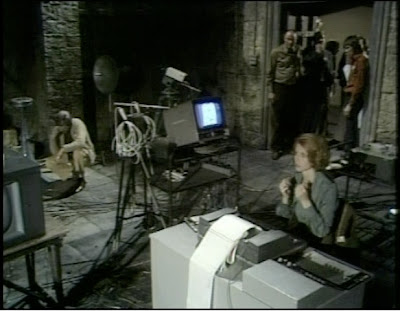 Conveniently, the researchers, led by loud and hard-headed Peter Brock (Michael Bryant), have been charged with trying to develop a new digital recording medium to help the British electronics industry compete with the Japanese (“give me Wagner’s Ring Cycle encoded onto a ball baring with instant playback”, Peter demands of his colleagues, to hoots of derision and disbelief that seem wonderfully quaint from a 2009 perspective). So when they find themselves confronted with a room that regularly manifests disembodied screams and a hanging phantom lady, the solution is as obvious as it is ingenious: the walls of the room itself are storing information from the past, and projecting it directly into the minds of visitors at irregular intervals… thus potentially making the room the breakthrough the team is looking for!

Initially “The Stone Tape” lays on the haunted house mythology pretty thick, often with direct reference to Robert Wise’s “The Haunting” (a film whose effective, no nonsense style is very much reflected here in both the writing and direction). So we have half-remembered tales of unsuccessful exorcisms, and of a local boy who went insane after being locked in the room overnight, a stairway leading to nowhere and a Victorian servant girl who hanged herself from the top of it. Director Peter Sasdy certainly had a pedigree in the world of horror, having helmed “Taste The Blood of Dracula” and “Hands of the Ripper” for Hammer in the preceding years, but what’s immediately notable here is that the jump-scares and gothic imagery one might expect of a ghost story are almost completely excised in favour of a more subtly malign atmosphere that reflects our characters’ scientific background and, in the case of Peter and psychic sensitive computer programmer Jill (Jane Asher), their respective moral failings and nervous disposition too. As such, The Stone Tape” is realized with a cold and queasy realist inversion of the gothic aesthetic that would find it’s natural home a decade later in David Cronenberg’s early films. 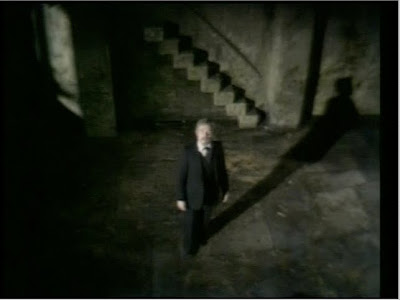 Kneale’s writing is at its absolute best here too, and in fact “The Stone Tape” is as successful as a human drama as it is as an excursion into high concept weirdness. Peter’s character – a mendacious, bullying egotist with a proto-Thatcherite drive to success that sees him grasp the possibilities of his haunting theory with an Ahab-like determination, then drop it like a hot potato as soon as his professionalism is called into question – is oddly fascinating, especially as every aspect of his situation, including his opportunistic affair with the fragile and confused Jill, is sketched out in detail for us. As a sub-plot develops involving Peter’s battle for funding with a rival research team led by an oaf trying to perfect an experimental washing machine (perhaps here Kneale is making a crafty reference to the BBC’s tendency to sideline more forward-thinking projects in favour of low-brow schedule-fillers?), one begins to realize that “The Stone Tape” would be a pretty involving tale with plenty to say about British culture, even without the supernatural elements.

For all its modernism though, “The Stone Tape” still manages to hold true to the gothic formula, essentially boiling things down to a frightened and hyper-sensitive young woman alone amid the ghostly ruins, as the repressive and claustrophobic nature of her situation and the venal and manipulative nature of her companions if given physical form via the supernatural – as per usual. Jane Asher (who you may recall tackled similar territory in Corman’s “Masque of the Red Death”) is superb in the role of Jill – a stricken gothic heroine breaking out from under the skin of an educated and level-headed modern woman. 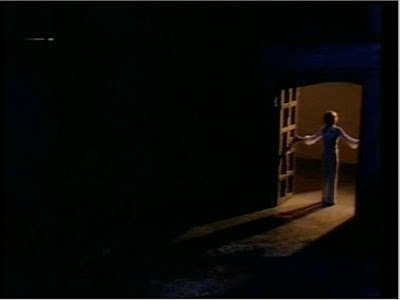 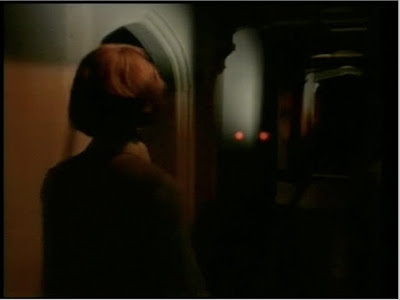 Also adding a huge amount to “The Stone Tape”s singularly creepy totality are the audio and visual effects, with the spooky-at-the-best-of-times BBC Radiophonic Workshop turning in one of their all-time best unhinged sound designs, full of baleful, echo-laden incidental passages and distorted EVP ghost-chatter that could have been pulled straight off an Eric Zann or Mount Vernon Arts Lab release. The visuals, you’ll be unsurprised to hear, are the perfect match – despite the obvious budgetary constraints, the designers certainly didn’t hesitate to throw in as much beautiful, fluorescent ectoplasmic splurge as they could muster, with split second glimpses of unspeakable, half-formed things, disorientating UV lighting and surreal super-impositions all serving to create a truly startling conclusion.

Prior to the play’s final ten minutes though, it should be noted that the supernatural elements are masterfully underplayed, with the trad ghost story tropes setting us up for shocks and surprises that never really come, and that are all the more unsettling for their absence. In true cosmic horror fashion, even the story’s final, mind-bending conclusions are merely hinted at rather than fully spelled out, left to sink in slowly over preceding hours/days as the full scale of the play’s central concept becomes clear. 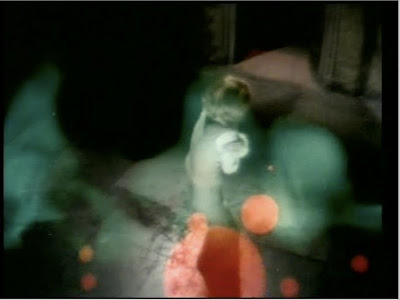 When, after a frenzied night spent trying to ‘control’ appearances of the apparition using frequency generators and UV lights, the phenomena seems to disappear completely, the team conclude that they must have accidentally ‘wiped the tape’, and, slightly embarrassed, move back to their original work. It is only Jill who realises that the others are still stuck in an analogue mindset. Rather than a ‘tape’, the stones of the room function as a three dimensional matrix, and as the most recent layers are removed, older voices – characterized by the room’s past victims as “the others” – will begin to emerge, more deteriorated and more malign the further back you go; and how far back CAN you go? – to the laying of foundations in Saxon times, or to the formation of the stones themselves, before the dawn of the earth…? 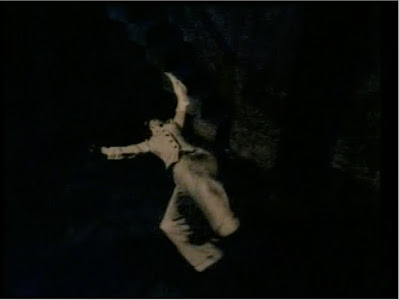 The answers are left hanging, just like the Victorian servant girl who previously tapped into the voices from the stone, as Kneale demonstrates powerfully the idea that when you try to throw science at a mystery, the mystery is just as liable to magnify and overtake you as it is to recede. Just ask the guys working on the Large Hadron Collider, and file “The Stone Tape” as essential viewing for anyone with an interest in intelligent approaches to science fiction, paranormal phenomena or cosmic horror, or anyone who simply wants to drink in the analogue ghosts of some authentic, high-grade British weirdness.
Posted by Ben at 20:20

Ben, this is an outstanding review. I am a huge fan of Kneale and The Stone Tape. I think it's brilliant. Your review really nailed this one. Bravo.

hi, pleased to meet you

Come and pay a visit some time

I know I have this somewhere, as yet unwatched, on an old VHS tape--you've made me go hunting for it. I want to watch it NOW!

Thanks for your kind words filks - much appreciated, as always!

Another thing I really loved about The stone Tape, but didn't want to mention in the main review because I didn't want to go off the point too much, is the very existence of the 'sound gun' that they use to bombard the room with different frequencies - a sort of giant foghorn that's shoulder-mounted like a bazooka and seems to have a mechanism on the back for dialing in different frequencies..?

Needless to say, I want one.

A superb review of an interesting programme. Many thanks for this article.