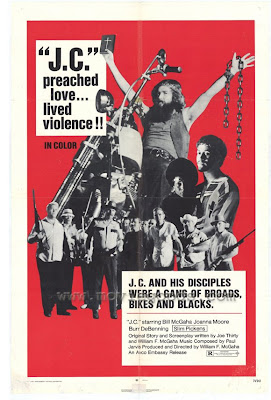 Yes, that’s right, “broads, bikes and blacks”. Clearly not the sort of thing the REAL Jesus would want anything to do with, eh?

Of course, the most immediate irony here is that despite the flagrantly offensive poster, (presumably designed to sell the movie to a redneck drive-in audience who were expected to be shocked and thrilled by the prospect of a film that dared portray something other than white men who drive cars), 'J.C.' is actually a surprisingly earnest and well-intentioned film, its sympathies laying firmly with the hapless, peace-loving hippies who are harassed at every turn by the villainous forces of redneck bigotry. Which is not to say it’s worth watching, but… at least it’s heart is in the right place, which is more than can be said for most other cheapo biker/hippie flicks.

Independently financed, ‘J.C.’ would seem to have been a bit of a labour of love for writer/director/producer/star William McGaha. According to IMDB, McGaha had helmed two previous shoestring quickies prior to the dawn of the post-Easy Rider hippie exploitation market - “Bad Girls For The Boys” (‘66) and “The Speed Lovers” (‘68). Whether or not he had actually morphed into a fully paid up freak brother by ‘72, he certainly does a fine impression of one in the eponymous role of J.C. Masters, a perpetually stoned biker whose gentle sensibilities are such that he can scarcely leave the house without swiftly becoming appalled at the brutality and bad vibes that greet him.

The whole opening section detailing J.C.’s day to day life is actually quite entertaining, in a barely watchable Cheech & Chong sort of way. Marvel as J.C. gets a job on a construction site, gets the giggles when he sneaks out for a quick smoke with his best pal, and quits because the taunts of his cracker co-workers are bringin’ him down! Guffaw as J.C. gets wasted in his psychedelic ‘pad’, and rolls around on the floor in his pants for far longer than is strictly necessary! Wonder why the hell you’re even watching this movie anyway as J.C. sits on the can reading the newspaper and gets so BUMMED OUT at all the evil in the world he can scarcely bring himself to stand up! Sigh sympathetically as J.C.’s girlfriend gets pissed off because he quit his job, but then can’t stay mad at him because he’s just too damn lovable, like a big hippie puppy dog! You get the general idea.

Unfortunately though, a movie like this is duty-bound to have a plot, and some sort of point, and this arrives when J.C. and his old lady get together with all their biker pals for a big, open air hoedown, during which J.C. drags himself to the top of a hill and starts drivelling on in a portentous manner about seeing “a big eye opening up in the sky” and about how he’s seen a glorious vision of a place where he and his buddies can live free of the hassles and discrimination of the straight world, and, y’know, things of that nature. For reasons that the script fails to sufficiently explain, J.C’s chums, rather than just assuming he’s stoned again and putting him to bed early, are deeply affected by his ramblings, declaring themselves his disciples and vowing to follow him to the ends of the earth in a grand quest for…. whatever.

The first stop in their quest, for reasons that remain equally vague, is J.C.’s old hometown, a backwoods Alabama shithole he left when he was 17, where he has a sudden urge to visit his sister, who is now married with kids, living the Christian life. Some reasonably authentic and evocative footage follows, as the gang motor through the centre of town in all their field hippie finery, McGaha’s camera doing a good job of capturing the sights, sounds and gawking “hey, that fat hairy guy’s a-filmin’ us” disbelief of smalltown Alabama circa 1972, at least until the actual actors portraying the local crew of yahoos and curmudgeons turn up, nullifying any sense of realism as they wave their fists and say stuff like “damn you boy, you weren’t never no good”, expressing violent consternation at his daring to “bring n*ggers into town”. What we learn here is that J.C.’s disciples, whilst they may be goofy and stoned, are also a pretty solid and uncompromising bunch who ain’t gonna take this shit laying down, instead taking the time to score maximum RIGHT ON points by defending their belief in racial and sexual equality in a town square debate with a fuming, racist storekeeper.

Once safely ensconced at J.C.’s sisters’ idyllic rural homestead, the gang camp out on the lawn, getting on with their hippie shenanigans in earnest as J.C. and his sister have some deeep talks about their differing ways of life, whilst waiting for her bad tempered cracker husband to come home and give everybody a hard time. This confrontation just about passes without incident, but not before J.C.’s best buddy Ben (the black guy) almost gets his head bashed in with an iron bar. It’s shortly after this that Ben, having established that he’s spending time in a town where most of the populance would lynch him as soon as look at him, displays a nigh-on herculean disregard for his own safety as he gets one toke over the line and wobbles off into town on his own to pick up a six pack. Naturally it’s only a matter of seconds before he’s in the local slammer on a narcotics charge, getting the shit beaten out of him by the cranky sheriff (played by Slim Pickens, bringing all the gravitas of a Smokey & The Bandit bit-part) and his deputy (a vengeful Vietnam vet who just won’t shut up about the service he gone done for his country). J.C. pays them a visit to attempt some diplomacy, only to discover that Deputy McKnucklehead is in fact his long-standing high school nemesis, and…. well after that the movie basically descends into a load of grim n’ squalid hippies vs. rednecks carnage that I’m sure you can pencil in in your brain without my plot synopsisin’ help.

For all the good will in the world, ‘J.C.’ is not really a classic movie. Direction and acting throughout may most generously be summed up as ‘adequate’, although in it’s portrayal of the confrontation between the ‘new’ and ‘old’ American South, the film is unusually direct for a b-movie, and the claustrophobia and racial/social tension is pretty compelling in places – more ‘In the Heat Of The Night’ than ‘Satan's Slaves’. The central problem is the rather lame-brained script, which systematically fails to really capitalise on any of the reasonably interesting issues the concept raises. Even the most screamingly obvious JESUS=HIPPIE parallels are left unexplored, despite, one would imagine, being the central conceit that kick-started the film in the first place. One of the better scenes has the sheriff delivering a monologue on J.C.’s family history – it turns out his father was a local religious fanatic with a handful of cult-like followers, who raised his son to be some kind of messiah (hence the name) – but once again, this potentially rich vein of interesting-ness is left undeveloped, and it scarcely mentioned again. J.C. only mirrors Jesus to the extent that he has the same initials, the same beard, a vague belief in peace & love and a few disciples, and beyond that… well if you don’t like it, write yer own damn thematically engaging script, city boy! Our one’s got fist fights and shotguns and Slim Pickens, and if that’s not good enough for ya, too bad.

Likewise, most of the characters’ actions and motivations don’t really make a great deal of sense at any point, and, for all the film’s clear cut sense of moral righteousness, I’m duty-bound to report that there’s also an absolutely appalling sequence wherein one of the hippies gets an eyeful of J.C.’s sister and tries to rape her. Having had his ass kicked, he goes back to apologise to her, coming out with something along the lines of “I’m sorry ma’am, ah didn’t mean nuffink by it, I’m a hippie and we’re used to just takin’ what we want”. Stirred by such enlightened reasoning, the sister instantly forgets her lifetime’s dedication to becoming a steadfast wife & mother, and lets the little creep have his way with her! What, and indeed, The Hell?

For all that though, you’ve still got to have a certain amount of respect for ‘J.C.’, as an exploitation movie that manages to drop almost any element of exploitation and instead strives to become what is, on at least some level, a serious drama. Top marks for effort anyway, even if William McGaha couldn’t quite pull it off. One suspects he was maybe spending too much time freakin’ out in his pants in his psychedelic shack when he should have been writing a better script, such is the unnerving realism of those early scenes, but either way, his failure to appear on the credits of any subsequent IMDB-recognised motion picture in any capacity sadly speaks volumes about the impressions this one gave people of his talent.

Original music, by the way, is provided by an outfit called ‘Covenant’ or something, who, appropriately enough I guess, have that cleaner-than-clean early ‘70s born again hippie thing going on, sounding much like I’d imagine all those private press Christian psych LPs that jaded collectors get all hot and bothered about probably sound. Eg, not good.

Some kind soul has uploaded a few scenes from the movie to youtube:

J.C. can be downloaded in full as an .avi file from Culta Rare Video.
Posted by Ben at 13:53

My father was actually in this movie, as were most of the townsfolk where this movie was shot.

As my own father said "I would have walked out on it had I not been in it".