Bloody NEL:
Lord of the Spiders
by Michael Moorcock
(1975) 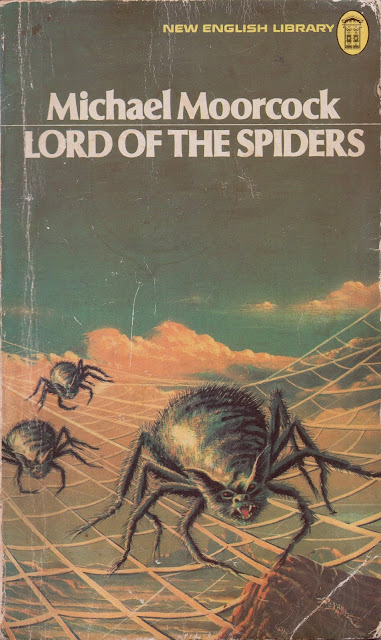 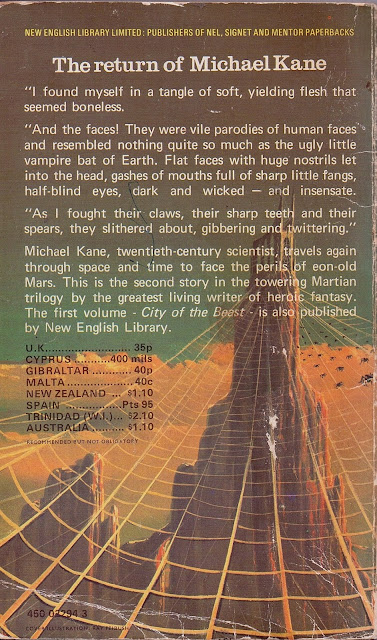 Once again, I’m going to be out of the country for a few weeks, so whilst I’m gallivanting, I’ll leave you in the company of some recent additions to my paperback mountain, beginning with a few from the ever-pungent exploitation vats of New English Library.

Even before the late ‘70s saw paperback racks suddenly overflowing with sharks, crocs, rats, bears and crabs (more of which in a few days), monsters already seem to have often taken pride of place on NEL’s SF covers (see To Outrun Doomsday, for example), and, in their own weird sort of way, these delightful bat-headed spider things feel as iconic as anything in the realm of ‘70s British paperbacks. (Unfortunately, I haven’t been able to find a name to attach to the cover art anywhere online, but as ever, info or speculation is welcomed in the comments.)

Likewise, I’ve always had a real soft spot for Michael Moorcock’s early straight science fiction novels, but for some reason I’ve never gotten around to this one – originally published in ’68 as ‘Blades of Mars’ - or it’s predecessor ‘City of the Beast’.

Basically these books are an unabashed homage to Edgar Rice Burroughs’ Mars and Venus stories (lest we forget, Moorcock began his literary career, aged 17, as the editor of ‘Tarzan Adventures’), and verily, they are red-blooded stuff, full of grand sentences, with many commas, ending in proud exclamation points!

(Perhaps the fact that NEL also reprinted the Burroughs books in the ‘70s had something to do with their decision to acquire these particular Moorcock works? Who knows..)

Anyway, it never ceases to amaze me that Moorcock was knocking out this delightfully old school stuff at the same time that he was championing the most far out voices of SF’s experimental / psychedelic new wave as the editor of New Worlds. But then, that goes straight to the heart of what makes him such a unique and vital figure in the field of popular culture really, doesn’t it? At any given point in his career, he has contained multiples, and his determined refusal to acknowledge a dividing line between high and low culture, between intellect and entertainment, between reality and fantasy, should stand as an inspiration to us all.

Ah, I have long learned to just accept Moorcock for the many tentacled wonder he is, knocking out a gajillion books of all plumes. A true wonder.