Bloody NEL:
The Unpleasant Profession
of Jonathan Hoag
by Robert A. Heinlein
(1976) 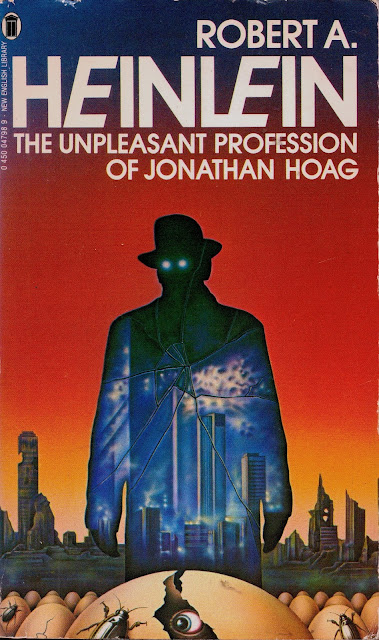 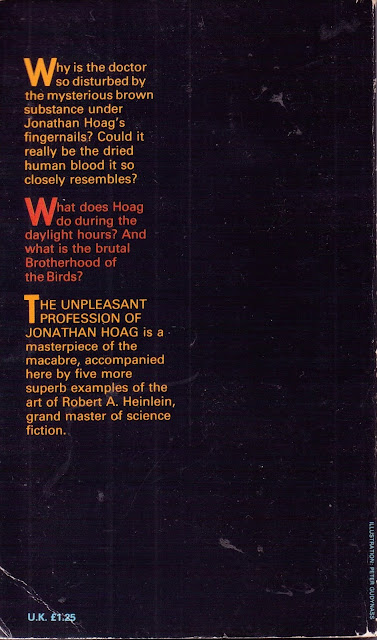 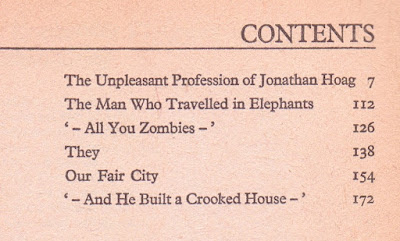 I couldn’t move on from my recent survey of New English Library science fiction titles without a tip of the hat to Robert Heinlein, given that NEL reprinted a fairly vast swathe of his output during the 1970s.

Believe it or not, this book has actually been in my possession since I was about fifteen years old; entirely unaware of Heinlein’s peculiar and divisive political beliefs, I bought it simply because I thought it looked cool and sounded interested, and I wasn’t disappointed.

The title story in particular sticks in my memory as a wonderfully mind-bending example of Twilight Zone-style high concept SF, the secrets of which I won't divulge here beyond simply noting that it’s definitely worth a read.

Trawling through some web searches reveals that NEL published versions of this book with at least four different cover designs. This is by far my favourite one though, and if you really squint, you’ll be able to spot an art credit on the back cover for Peter Gudynas, an artist who seems to have began working on SF cover art commissions at around this point, but worked more extensively through the ‘80s and ‘90s, devoting his efforts to a design aesthetic which was… not quite so much my kind of thing, let’s put it like that.