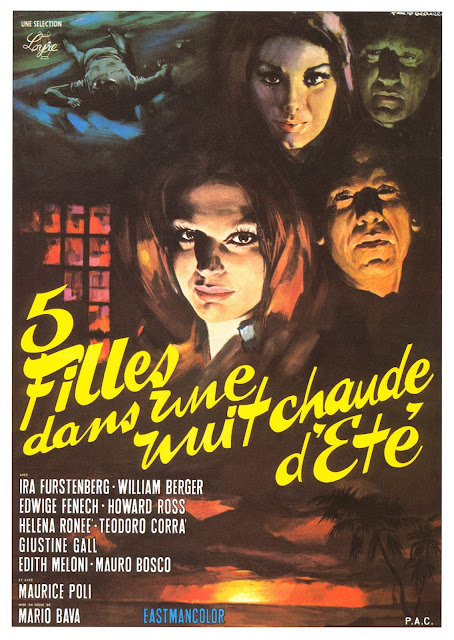 Quite possibly the least celebrated of Mario Bava’s many contributions to the horror / giallo field, ‘5 Bambole per la Luna d'Agosto’, realised in Italy in March 1970, is unlikely to find a place on many Bava fans’ top ten lists… or even many Edwige Fenech fans’ top ten lists, for that matter. If you’re a dedicated viewers of European genre movies, perhaps it won’t even make your top ten William Berger films. Hell, even top ten films for which Piero Umiliani did the music might be pushing it. But, nonetheless, I still retain a huge soft spot for this underachieving body count picture. Taken purely as a compressed dose of pure 1969/70 Italian Riviera decadence in fact, I actually find it pretty unbeatable. (1)

It is well-known by this point that Bava directed this film under protest, after the producers refused him the extra time he had requested to rework Mario di Nardo’s script into something he considered workable. And, watching with almost fifty years hindsight, I think we can probably share Mario’s pain, for it is di Nardo’s shoddy and derivative plotting – and the production’s dogged determination to stick to it – that is ultimately responsible for ‘Five Dolls..’ failure to attain the same level of quality as the classics Bava usually seemed capable of banging out like clockwork whenever he was allowed near the horror or giallo genres.

Vague and incoherent (though not in a particularly fun way), this Agatha Christie-derived island-bound whodunit scenario revolves – thrillingly - around the formula for a new kind of industrial resin. This is held solely within the bonce of Berger’s grumpily moralistic Herr Dr Scientist (who is immediately differentiated from the conniving playboys around him through his decision to wear an uncomfortable-looking woolly jumper to his sunny island retreat).

Needless to say, the aforementioned conniving playboys and their equally conniving wives are all on the case to obtain said formula, and soon million dollar cheques are being idly tossed around as inconvenient corpses concurrently start to pile up, the latter generating a sense of mild annoyance in the surviving characters roughly equivalent to which might be expected if they discovered that, say, the meat for their dinner had gone bad or something.

Such is the overwhelming disinterest generated by this scenario that, when the characters start indulging in sordid extra-marital liaisons and accompanying back-stabbing, the sense of transgression is somewhat muted by the fact that we can’t quite remember who most of them were supposed to married to in the first place.

Unfortunately, my own (non-conniving) wife tends to be a stickler for all this bloody “plot” rubbish, so, after the film’s spectacularly nonsensical attempt at a twist ending rolled around, we were obliged to spend a good ten minutes vainly trying to establish what was going on – including replays of certain key scenes – before she’d let it be. In the end she reckoned she’d solved the mystery to her satisfaction, but I remain happily and uncaringly mystified.

Never fear though, because, more so than ever in Italian genre cinema, IT DOES NOT MATTER what is actually going on here. Effectively leaving the script for dead at the side of the road, Bava instead wisely concentrates his efforts upon distracting us from its all-too-evident shortcomings, doing his utmost to make each shot more striking, more gloriously opulent and packed with more weird, incidental detail, than the last. And when Mario Bava sets his utmost in that direction, you know you’re in for a good time, regardless of overbearing producers, lazy-ass writers or budgetary constraints.

As is often the case with Bava, the environment in with ‘5 Dolls..’ takes place is almost entirely illusory, with the beautifully executed matte shot that creates the impression of a ultra-kitsch space age beach house perched precariously upon an overhanging cliff-top forming a kind of late ‘60s take on the twilit gothic vista the director created for Whip and the Body – a film that is also recalled by the assorted trysts amongst the rock pools that pad out the concluding act of ‘5 Dolls..’, suggesting perhaps the early stirrings of a self-reflexive tendency in Bava’s work that would reach full bloom in ‘Baron Blood’ a few years later.

Within this fictitious beach house meanwhile, the fantasia constructed by the hard-working set builders in Rome’s Dear Studios is really a sight to behold, mixing wide, circular rooms with asymmetrical vertical lines provided by weird-looking door frames and staircases. Strewn with extravagant soft furnishings, unlikely glassware and garish abstract art adorning the walls, this joint is one of the best ‘space age bachelor pad’ fantasies that Italian genre cinema has to offer (chronic lack of bachelors notwithstanding), even as its unfeasible curves and angles are gradually transformed into a human scale ‘Mouse Trap’ game for the surviving, increasingly paranoid characters, to bounce around in.

(This metaphor that perhaps enters my mind as a result of one of the movie’s more memorable and overtly surreal sequences, wherein the shock of a character’s murder is closely followed by the spectacle of a load of entirely inexplicable silver balls cascading down a spiral staircase.)

Despite working here with what was presumably a fraction of the budget assigned to his earlier ‘Danger! Diabolik’ (1968), Bava nonetheless still manages to bring a sliver of that film’s incomparable aesthetic cool to proceedings, creating a vibrant, endlessly enticing moving postcard from a supremely artificial utopia of myopic self-indulgence; a realm of gleaming chrome, gaudily patterned upholstery, hallucinatory interior décor decisions, crashing waves, hazy J&B-induced stupor and artfully deflected sunlight so spectacularly sensual that not even a series of brutal slayings can harsh yr buzz. (Hey, the characters initially don’t seem to mind them too much, so why should we care?)

Meanwhile, Piero Umiliani’s score – perhaps one of the first to wed harpiscord-heavy orchestration to a driving rock rhythm section in a manner that would soon become de-rigour in the giallo boom of the early ‘70s – ensures that ‘5 Dolls..’ is a splendid film to listen to as well as to look at, whilst the mighty, fuzz-rock blowout – ‘Ti Risveglierai Accanto a Me’ performed by Italian psyche/prog stalwarts Il Balletto di Bronzo – that plays over the movie’s closing credits is an absolute banger, it’s in-the-red roar only enhanced by the dusty distortion of the film’s scrubbed up mono soundtrack reels.

Though the murder sequences in ‘5 Dolls..’ are somewhat on the mild side for a Bava giallo (such is the scope of the director’s achievements, it’s easy to forget that he pushed on-screen violence to new extremes across two decades via ‘Black & Black Lace’ (1964) and ‘A Bay of Blood’ (1971)), they are all nonetheless magnificently staged, making full use of hazy, sun-dappled day time photography and an almost comical excess of looming, foreground foliage.

(Critics might be inclined to point out that, for all the accolades Bava has received for his technical prowess, he gets pretty damn goofy with the zoom lens in this one, but, I’ve got fifty plus Jess Franco films under my belt at this point, so watch me care.)

Repeated shots of plastic-sheeted corpses swinging upon hooks in the house’s meat locker meanwhile add a welcome touch of icy, macabre atmosphere to what is otherwise a weirdly sunny and relaxed take on horror film-making, and the unexpectedly gory demise of the fabulous Ms Fenech provides a genuine jolt that feels like a warm-up for the shock tactics of the aforementioned ‘Bay of Blood’.

Speaking of Fenech, I hope I won’t drift too far into dirty-old-man territory in pointing out that, as per usual, her frame provides a pretty substantial boost to the movie’s production values in and of itself, and, quite frankly, I don’t know if she ever looked better on screen than she does here (and yes, I realise that’s quite a claim). Elsewhere in the casting department meanwhile, ‘5 Dolls..’ pursues the usual giallo pattern of pairing up a selection of quote-unquote ‘foxy babes’ with a crew of craggy-faced, shady-looking and (for the most part) somewhat older gentlemen. I suppose at a push you could make a case that this reflects the fact that these characters are supposed to be a bunch of high-powered industrialists and their trophy wives… but to do so would be to imply that these people bear some kind of loose similarity to believable, real world human beings, and frankly nobody wants that.

Instead, let’s just accept that this was the dawn of the ‘70s, and that’s the way things were done. Then we can all settle back and enjoy the scenery – which was certainly the point of the exercise as far as Bava was concerned.

Of course, it could be argued that ‘5 Dolls..’ was not an *entirely* cynical exercise on Bava’s part. In his commentary track for the film, Tim Lucas is keen to place ‘5 Dolls..’ within his own auteurist take on the director’s work, specifically with regard to the his palpable distaste for the greed, excess and inhumanity of the film’s privileged characters. Compelling as Lucas’s case may be however, such theorising must inevitably remain a secondary concern in film that sees characterisation and plot machinations so comprehensively pushed to the sidelines in favour of a gloriously garish, over the top celebration of this period’s unique visual style.

Resorting to an iffy music metaphor to try to summarise my feelings for ‘5 Dolls For An August Moon’, I suppose you could say that, whilst this one is definitely never going to be the eternal, always-in-print, take-it-to-the-grave classic album in anyone’s collection, it still feels very much like the filmic equivalent of the cheesy charity shop lounge-jazz LP you bought because you liked the cover and just keep playing all the time because, hey, it makes you feel kind of happy.

I like this film a lot, much more than all of Bava's post-Hatchet For A Honeymoon output save Lisa and the Devil.

In 5 Dolls, there is a never explained time/space shift moment that enters the surreal zone. It's at 60 minutes when the three are passed out drunk on the living room floor. A ship arrives with an investigative crew. The sailors enter the house and the three are gone. It's clean and empty. They leave the house and the next shot is the three passed out in the living room. How did they disappear and re-appear? I don't know if this is an editing goof, intentional in the script, Bava's idea or something was cut. It's definitely an out of nowhere Lynchian moment that changes the film from a giallo to something a Dadaist would have done.