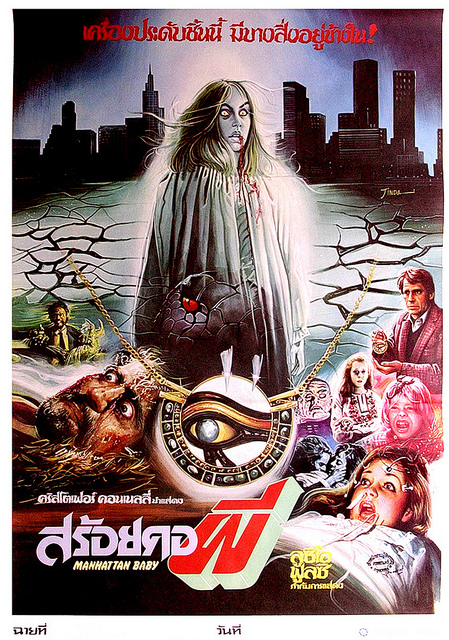 (These Thai posters are great, aren’t they?)

It occurred to me recently that, despite counting myself as more-or-less of a fan of Lucio Fulci’s horror movies, I had never actually taken the time to watch this oft-maligned black sheep in the flock of his early ‘80s “hits”, and that my reasons for avoiding it were flimsy to say the least.

After all, the similarly overlooked ‘The Black Cat’ (1982) holds a huge place in my heart, and the broadly similar line taken by fans when trashing ‘Manhattan Baby’ – that its subject matter is weird, it makes no sense and it features an insufficient quantity the director’s trademark gore set-pieces – actually makes it sound like exactly the kind of Fulci film I might enjoy a great deal (by which I mean, I can take or leave the gore, but I’m *all about* the weirdness).

Well, uh… that was… something?

Ok, let’s back up a bit, and start by saying that, whilst ‘Manhattan Baby’s script can probably hold its own against any other ‘80s Fulci movie in the high stakes game of making-no-bloody-sense-whatsoever, what I found most difficult to grasp about the film was less the familiar holes in the action that transpires on-screen, but rather the more profound mystery of how this production came to exist in the first place.

Basically, I suppose you could say that the production system fans often refer to as “the great Italian rip off machine” worked primarily on the basis of constant forward momentum. Source material (Hollywood hits, other successful cultural properties and trends) were fed in at one end, whilst unexpected hybrids, reworkings and wildly unlikely combinations emerged at the other, hitting cinemas (or, subsequently, video stores), making back their money and disappearing into the abyss before anyone had a chance to re-read the warped plot synopsis and exclaim “hang on, this doesn’t make any se…”.

Sometimes though, the machine got a spanner in the works. The parts didn’t cohere, the gears crunched together… but the momentum could not be allowed to slow. There was no time for anyone to get in there and fix the problem, and so the mangled movie was spat out into the world anyway and left to fend for itself.

And, boom, there you have it – a mutant like ‘Manhattan Baby’ lies writhing in a pool of goo on the floor, as the movie industry stands around scratching their heads, wondering what the hell they’re supposed to do with some misbegotten mash-up of ‘Raiders of the Lost Ark’, ‘Poltergeist’ and ‘The Curse of the Mummy’s Tomb’, as directed by a visionary, misanthropic sadist and scripted by a couple (Dardano Sacchetti and Elisa Briganti) who’d find it difficult to get through a knock knock joke without contradicting each other and getting lost in the resulting plot holes.

I mean – firstly, who was this thing supposed to be aimed at? The action-adventure tinged storyline, the concentration on child characters and familial relationships, and the complete lack of sexually suggestive content or what the BBFC might term “adult themes”, all leads me to suspect that the original intent may have been to gear the film toward a family audience. But, needless to say, the fevered directorial decisions, scenes of extreme violence and general aura of raging insanity that Lucio Fulci brought to proceedings render that an impossibility, resulting in a tonal disjuncture that pretty much leaves all potential demographics unsatisfied.

And secondly, why in the hell is it called ‘Manhattan Baby’? What a terrible name for a horror movie! [Before anyone writes in, I believe this title was also used for the film’s Italian release too.]

After pondering this question for quite some time (because, you know, it’s the kind of pressing issue that tends to me on my mind in the dark of the night), I can only suppose that the title was intended to echo of ‘Rosemary’s Baby’. But then, why would they want to imply a connection to a film that came out fourteen years earlier, and that furthermore has no real similarity to this film’s storyline whatsoever, beyond the fact that both feature somewhat occult-ish goings on afflicting people in a New York apartment building? And to then imply this connection in such an obscure fashion that I daresay most viewers never even noticed it..? Man, the “great rip-off machine” must have really blown a fuse the day it came up with this one.

Whilst such questionable decisions may have hurt ‘Manhattan Baby’s commercial potential though, I think it is fair to say that they do not necessarily mitigate against the possibility of euro-horror aficionados such as you or I enjoying the film thirty-something years down the line. No, what does the mitigating there is the unfortunate realisation that this production’s on-set execution was just as confused as its conception and marketing.

Admittedly, the Indiana Jones-ish opening scenes, set in some gloriously clichéd Movie Egypt, are pretty cool. For a start, it looks as if they did actually go out on location in Real Egypt, with desert panoramas, monolithic ruins and bustling market places all present and correct. The atmosphere of grandeur and dread that Fulci’s roving camera conjures from these environs is quite impressive too, leading us to keenly anticipate the adventures that surely must follow after Christopher Connelly’s two-fisted archeologist is blinded by an ancient laser beam during a sacred-site-of-ancient-devil-cult defiling tomb-raiding expedition and his daughter is meanwhile presented with a sinister amulet by a spectral crone.

Sadly though, once Daring Dr Connelly (who I’m sure must have done brisk business in the ‘80s as “that guy who looks like a slightly older Harrison Ford”, incidentally ) calls the whole thing off and the action shifts back to the rather pokey interiors of his family’s “New York” apartment, well, all bets for a fun time are off.

To some extent, Fulci’s characteristic disinterest in his human protagonists must take the blame here – after all, establishing and maintaining our interest in the characters and their relationships to each other is integral to the success of this kind of “evil creeping into a nuclear family” set-up (‘The Shining’, ‘The Exorcist’ and ‘Poltergeist’ would all be go-to reference points here), but, in the wake of ‘The Beyond’ and ‘The New York Ripper’, one suspects the director was simply not in the right frame of mind to deliver on this more subtle, slow-burn kind of horror picture. Instead, he keeps things cold, distant and faintly inhuman, leaving his cast to stare blankly into the camera and denying us the sense of empathy that would more conventionally pay off later in terms of tension and fear once characters we’ve come to care for are imperiled.

Regardless of this however, what I think really killed ‘Manhattan Baby’ for me is just its sheer lack of *mystery*. Whilst the opening (as outlined above) is somewhat intriguing, like many Italio-horror films that deal with occult-ish subject matter, the basic set-up is mundanely predictable, poorly developed and blindingly obvious from the outset.

I mean, come on - the scary amulet is causing the kid to become possessed, or else causing her to act as a conduit for evil spirits or a gate to another world or whatever, as an act of vengeance for her dad having desecrated the tomb – any idiot who ever watched a mummy movie already knows this, so why don’t we just cut to the chase, wheel on the learned Egyptian exorcist guy from the dusty old bookshop and get this show on the road, right?

Apparently unaware of this though, Briganti and Sacchetti tiptoe around their ‘big reveal’ for what seems like hours, expecting us to remain on the edge of our seats as they feed us obtusely spooky ‘clues’ (ghostly images turning up on polaroids, sinister strangers mouthing words from balconies, that sort of thing), whilst simultaneously failing to expand upon the imagery or mythology of their tale in any terribly satisfying fashion. (Ok, the idea that the daughter and other characters are being taken on “journeys” to some alternate world ancient Egypt, returning in a flurry of wind and sand, is pleasantly bizarre, but it’s too little too late to really overcome the feeling that the screenwriters are just cribbing straight from ‘Egyptian Curses 101’.)

What makes all this flim-flam worth sitting through – and indeed, allows ‘Manhattan Baby’ to remain a moderately worthwhile film overall – is the sheer extremity of Fulci’s direction. Despite the film’s relatively restrained subject matter, in purely technical terms I’m not sure I’ve ever seen Lucio go quite so far off the leash as he does here.

Once things get underway, almost every scene shot on the cramped interior sets becomes a riot of unnecessarily high or low angles, Franco-esque roving zooms, sudden pans and shock cuts that mock a mockery of the spatial relationships between character and the objects around them. Mundane dialogue scenes are conveyed to us via a mixture of extreme facial close-ups and shakey handheld footage of people’s torsos, and by the time the horror business heats up in the second half, Fulci seems determined to beat us over the head with jarring audio and visual stimuli until we reach the far end of Pure Cinema delirium, never to return to the mundane realm of cause and effect-based logic.

Happily, the director falls back to some extent here on the defiantly irrational approach to supernatural horror he pioneered in ‘The Beyond’ and ‘City of the Living Dead’, wherein the story’s rather nebulous “evil” manifests itself not through the more traditional auspices of some meandering physical monster, but rather via a series of completely inexplicable, terrifying incidents that descend upon the protagonists almost like natural disasters.

As well as providing a good time for filmmakers (allowing their imaginations to run riot without the tedious necessity of having to explain their ghastly set-pieces), this approach, whether by accident or design, also lends the aforementioned Fulci films a touch of impersonal Lovecraftian terror that is also felt somewhat in the closing chapters of ‘Manhattan Baby’, despite the far less intense nature of the bloodshed and cruelty on display.

Rather than anything dreamed up by the writers or effects team, it is Lucio’s camera itself that (along with an honourable mention to the film’s aggressive sound mix) is the main assault weapon here, and, if you’ve ever harboured a wish to see our man go full-on ‘Exorcist’, the finale of ‘Manhattan Baby’ won’t disappoint. A subsequent sequence that sees the exorcist guy being torn apart by reanimated stuffed birds(!) feels both gratuitous and ridiculous, but, by that point in proceedings, many viewers (your correspondent included) will feel so utterly disorientated they’ll barely be able to comprehend what’s going on, let alone criticise it.

Though it is a film that is difficult to describe as ‘enjoyable’, and frankly a mass audience was never likely to deem it even ‘tolerable’, there is nonetheless quite a bit for us hermetic, horror-lovin’ weirdos to get our teeth into in ‘Manhattan Baby’. Between the chuckles that can be gleaned from the drool-brained scripting and cardboard performances and the pleasures of getting our socks knocked off by Fulci’s sturm-und-drang direction in fact, I’d even go so far as to hesitantly commend this one to you as worthwhile viewing, regardless of its status as a flailing, god-forsaken mess of the highest order.

Certainly, if you make a habit of subjecting yourself to VHS-era Italian exploitation, you’ll have seen far worse train-wrecks than this on a fairly regular basis. Best therefore to file it under “worth a(nother) look”, and expect it to remain there in perpetuity.
Posted by Ben at 12:53