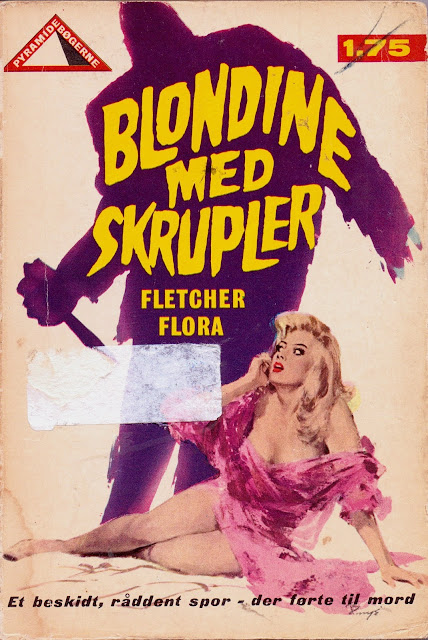 I honestly didn’t intend to do any paperback hunting during a brief visit to Copenhagen earlier this summer, but, during an early morning mission to pick up a set of bass strings, a down-at-heel bookshop called to me. Surveying the racks outside on the pavement, I knew I was done for.

It was the kind of place that no longer exists in any form in the British Isles (and who knows how long it will persevere in Denmark, or elsewhere on the continent); thousands of tattered crime and romance paperbacks (‘60s to ‘80s), crammed into plastic racks, sold cheaper than toilet paper. BINGO.

In theory at least, this place still functioned as a ‘paperback exchange’. Buy a book for 5 or 7 Krone, return it after reading for 2 or 3. By way of comparison, the two cups of coffee I bought that morning cost 50Kr. Nice cheap hobby.

If it’s not too much of a weird comparison, shops like this feel like seeing pulp books in their ‘natural habitat’, rather than the ‘captivity’ I’m used to finding them in in the UK, where the slightest sniff of cool/retro-y cover art usually commands at least a few quid from Oxfam. It’s a rare thrill that I can’t imagine will be available to us for much longer in any European capital given the presumably miniscule profit margins a place like this must run on in the 21st century, so it’s worth breathing in the dusty essence whilst we still can.

“Are you studying Danish?” the man at the counter asked me when my blatant foreignness became clear. When I sheepishly admitted that I collect these books for their cover art, he gave me a look I can only describe as incredulous contempt, and continued totalling up my purchases in silence.

Of course, the down side of such a dismissive attitude is that the covers of almost all the books I bought have been molested by the remains of some of stickiest and most destructive price stickers I’ve ever encountered – sometimes slapped onto the covers two or three deep. But hey – ‘collector’ though I may tragically be, I’m at least still immune to the accompanying virus of condition-related fussiness, so it all kind of adds to the charm, more or less.

As I’m about to embark on a far longer holiday – spending most of September in Japan – the next few weeks on this blog will be dedicated to showcasing my new collection of Danish paperbacks.

To begin with, we’ve got ‘Blondine med Skrupler’ (if you guessed ‘Blonde with Scruples’, you guessed right) by Fletcher Flora – another addition to the seemingly endless ranks of pulp novels whose titles make inexplicable assumptions about the nature and likely fate of those strange creatures known as “blondes”. (A pertinent topic for audiences in Scandinavia, needless to say.)

Artwork, as usual, is uncredited, but is unique to this Danish edition insofar as I can tell.

Fletcher Flora (1914 – 1968) never published a book named ‘Blonde With Scruples’ in English, but I *think* this book is a translation of 1958’s Leave Her To Hell!, which in its original incarnation from Avon Books looked like this; 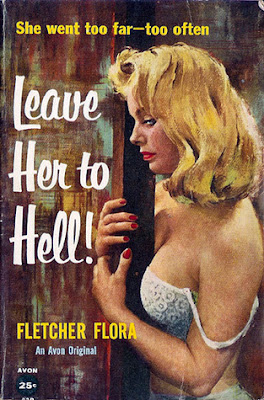