I don’t know whether or not anti-clerical sentiment played a role in Edgar Wallace’s writing, but it certainly seems to run rampant in Rialto Films’ series of 1960s Wallace adaptations, to an extent that goes above and beyond the blanket cynicism with which these films treat all forms of human endeavour. Even aside from the assorted crooked priests who tend to lurk around the corners of krimis as secondary characters, my own relatively small krimi library already includes such titles as ‘The Sinister Monk’, ‘Monk With A Whip’, and tonight’s feature presentation, ‘The Black Abbot’.

In contrast to the two ‘urban’ krimis we’ve looked at thus far in this review strand (#1, #2), ‘The Black Abbot’ provides an example of another major genre variant – the ‘country estate’ krimi. The estate in question on this occasion is Chelford Manor, wherein a casual visitor (assuming such a thing can possibly exist in krimi-world) could easily mistake the suave Dick Alford (Joachim Fuchsberger) for the house’s dashing young scion. Certainly, Dick seems to enjoy cultivating an aristocratic demeanor, sporting tweeds, plus-fours and an ever-present pipe as he spends a leisurely afternoon riding across the estate’s grounds in the company of – AHEM - Lord Chelford’s far younger fiancée (Grit Boettcher). Generally striding around as if he owns the place, Dick very much giving the impression that his inheritance is already ‘in the bag’, as it were, pending perhaps only one or two snags (of the living, breathing variety, natch).

As we soon learn though, the only position Mr. Alford actually holds within the estate than that of a humble ‘administrator’ (oh, the shame of it), hired by the still-very-much-alive-and-kicking Lord Chelford (Dieter Borsche) to attend to the day to day running of the house, whilst he concentrates upon his (apparently entirely obsessive) research into his family history.

In fact, far from the bed-ridden vegetable or weak-minded has-been common to this kind of “who’s got the will?” scenario, Lord Chelford is actually quite an intimidating figure, in spite of his preference for solitude – a bitter cynic whose approach to life epitomizes the old “just because you’re paranoid doesn’t mean they’re not out to get you” adage - thus making him perfectly adapted for survival in the back-stabbing world of the krimi.

In spite of Alford’s persistent attempts to convince Chelford that he is mentally unbalanced, insisting the old boy avoids undue excitement and trying to dull his senses via the dubious medicinal cocktails proffered by white-haired Dr Loxom (Friedrich Schoenfelder), the Lord wisely consigns these concoctions to the wastepaper basket as soon as his would-be ‘keepers’ are out of sight, before returning immediately to his painstaking investigations into the precise nature – and, more to the point, location – of (you knew it was coming) the legendary horde of treasure said to exist somewhere within the walls of the estate.

Whilst Lord Chelford is evidently very much on the ball vis-a-vis his assumption that these rumours of hidden riches will inevitably attract all manner of unwelcome and acquisitive interlopers toward his estate, his canny policy of universal suspicion has sadly been somewhat undermined by his poor staffing policy. Not only does he now have the unbridled ambition of Dick Alford to contend with, but Klaus Kinski, “fresh from a long stretch in Dartmoor Prison”, no less, has recently been appointed as the family butler, which can’t possibly be a good idea, let’s face it.

If you’re wondering where the titular Black Abbot fits into all this, well, naturally he is the ghostly spectre said to stand guard over the Chelford Treasure. If you were to guess at this point that the Abbot will turn out to be comprised of more solid flesh & blood than his ghostly rep would suggest, you’d be spot-on, and if you were to suggest that perhaps he might soon be returning to his old stomping ground to begin clobbering any suspicious characters found wandering around the estate after dark, you’d be doubly spot-on. And, this being a krimi, if you’ve got an inkling that by the end of the movie there will most likely be multiple Black Abbots running around contributing to the clobbering, you’d be, well - triply spot-on I suppose.

I’m unsure whether any real life Abbots ever wore the kind of identity-concealing black executioner’s hood favoured by the Black Abbot, but… who cares, frankly. It makes a perfectly sinister outfit for a movie heavy, especially with the addition of robes that, conveniently, remain sufficiently loose and voluminous to potentially hide the figures of just about any of our human cast members.

Predictably, our involvement in this whole mess begins at the moment the first body hits the ground. Do we ever get the back story on who the victim was? I’m not sure. Does it really matter? Point is, Lord Chelford, Dick and Klaus are all observed by each other furtively sneaking back to the house shortly after the deed is done, and so propriety demands that a call be placed to The Yard – much to the annoyance of all three of them, I should imagine.

Eagle-browed Detective Puddler (Charles Regnier) is soon on the scene, and it is with a sense of crushing inevitability that I must tell you he has also brought along one Horatio W. Smith (Eddi Arent), a bow-tied tosspot with a habit of constantly speaking about himself in the third person, thus insuring that ‘The Black Abbot’s allotted quota of comic relief is delivered with all the finesse of lumpy gravy from a college canteen.

As the plot proceeds to thicken quicker than the aforementioned gravy, the usual assortment of suspicious coves soon emerge from the woodwork to make their play for the loot – creepy-yet-pathetic Werner Peters and the spiv-ish Harry Wüstenhagen foremost amongst them – whilst Lord C’s gold-digging sister (Eva Ingeborg Scholz) simultaneously faces competition in the feminine wiles stakes from the mysteriously resurrected Lady Chelford (Alice Treff), who has seemly emerged from her tomb to wander the ground at night, as a somewhat less lethal counterpart to our hooded menace. Before long, fragments of a newly unearthed treasure map are in circulation amongst the cast, and, well… I hope you brought your hoods kids, for there is much clobbering to be done.

Thus far, we’ve lucky enough to have encountered two exceptionally good krimis (see links above), but to be honest, ‘The Black Abbot’ probably provides a more representative example of the genre’s wider successes and failures, as a wholly satisfactory but basically pretty routine ramble through the established conventions of the form.

Whilst the story as summarised above may sound like a hoot, ‘The Black Abbot’ suffers somewhat from plotting that swiftly becomes unnecessarily convoluted in a not terribly interesting fashion, as the scams and travails of various secondary characters are hashed out at length via static interior scenes that eventually consume a great deal of screen time, thus dragging things back toward the kind of dry tedium found in the British Edgar Wallace adaptations.

With the reliably charismatic Joachim Fuchsberger shifted across to a ‘suspect’ role here, ‘The Black Abbot’s obligatory police duo are also rather unengaging, with the combination of Regnier’s stern frowning and Arent’s senseless wittering never really making much of an impact on the way the story unfolds.

Speaking of which, the film’s ending (which I won’t spoil for you here) also proves a bit of a cop-out, relying as it does on the personalities and motivations of several key characters changing inexplicably, in a way that seems wholly out of keeping with their conduct during the film’s first half.

None of this would particularly bother me if the film instead had some measure of wildness, unpredictability or random fury to offer, but, despite apparently running into trouble with the German censors for some reason (if a trivia entry on the film’s IMDB page is to be believed), ‘The Black Abbot’ crucially lacks any of the moments of transgressive violence and sexuality that made ‘The Face of the Frog’ and ‘The Dead Eyes of London’ feel so bracing.

That said though, if you can keep your attention focused through the duller stretches, ‘The Black Abbot’ nonetheless eventually emerges as a pretty good time. As soon as the various parties concerned find themselves creeping around the dusty ruins and tangled undergrowth at night, pointing guns at each other, chasing sections of the treasure map and tangling with the Abbot, all of the aforementioned drawbacks are instantly forgotten, allowing the film to become what I believe I’m duty-bound to refer to as ‘a delightful romp’.

Directorially speaking too, ‘The Black Abbot’ feels a bit like a film of two halves. Whilst the interior scenes remain bland and workmanlike, things come to life as soon as we move to the shadowy ‘exteriors’ (strictly speaking a mixture of location shooting and sets I think), wherein director F.J. Gottlieb begins to make fine use of the film’s wide scope ratio, employing roving, airborne camera movements and even indulging in a few of the wacky compositional tricks and complex foreground shots seen in Alfred Vohrer’s krimis.

These sections of the film also benefit greatly from taking on a hefty dose of gothic horror imagery, as befits the crumbling scenery and the looming threat posed by the Abbot. The black & white photography is excellent throughout, and things become convincingly atmospheric as the characters begin to stumble around landscapes that could have come straight from a second division Italian gothic. The cut price back garden graveyard puts me very much in mind of the one seen in Terror Creatures From The Grave, and we even get to enjoy an eerie descent into a full on polystyrene-walled crypt set, complete with flickering torchlight and barred, cobweb-strewn grates tailor-made for a leading lady to cling to mid-scream. There are even a few supremely unconvincing fake bats on hand to add to the fun. Good times.

All of this, plus a generous helping of the gleefully cynicism one expects of a krimi and some fine turns from the cream of Rialto’s singular stock company, helps ‘The Black Abbot’ make it over the fence as a movie the majority of viewers will recall with a grin rather than a yawn. Whilst it’s certainly not going to change anyone’s understanding of life or cinema, it’s a pleasantly diverting bit of pulp hokum, somewhat reminiscent of Francis Ford Coppola’s ‘Dementia 13’ (which was shooting in Ireland at around the same time this hit cinemas, I believe), and as such gets a cautious-bordering-on-enthusiastic thumbs up from our panel here. 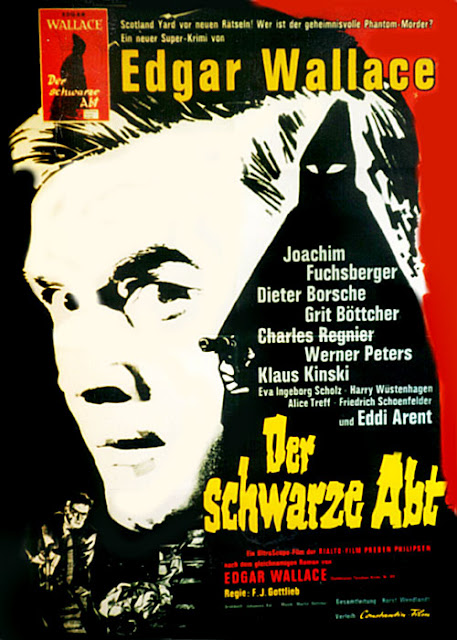 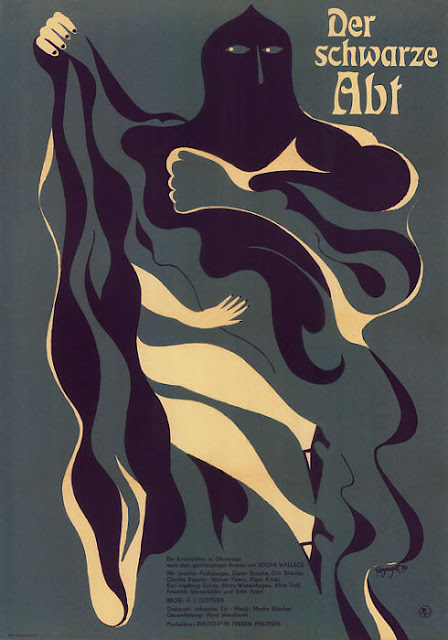