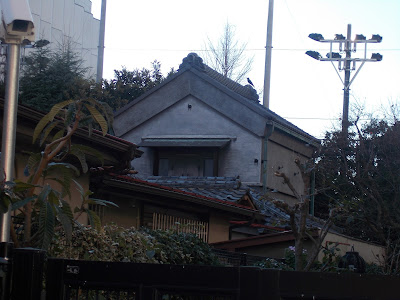 Within easy walking distance of Tokyo’s Ikebukuro transport hub, on the corner of one of the spotlessly clean boulevards surrounding the prestigious Rikkyo University campus, markings affixed a nest of stone owls beckon passersby down a side street. Follow, and you will soon find yourself outside the Edogawa Ranpo Memorial Centre for Popular Culture Studies, a small research centre affixed to the equally modest family home of its namesake, which is now preserved as a small museum and archive. 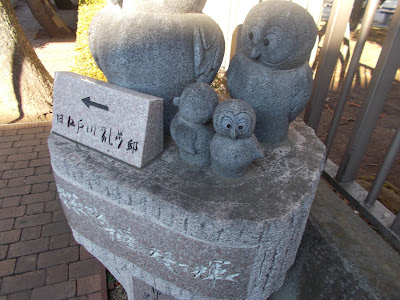 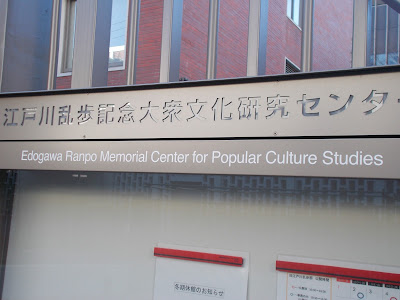 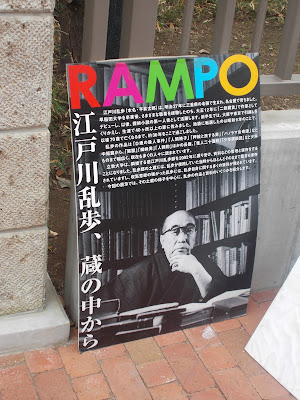 We previously touched upon the work of Tarō Hirai, aka Edogawa Rampo (1894 - 1965) in these pages when I reviewed Teruo Ishii’s Horrors of Malformed Men back in 2013, but for the uninitiated, Rampo might best be summed up as the godfather of Japanese crime, mystery and horror fiction.(1)

As a keen scholar of English popular writing, Rampo did a great deal to familiarise the Japanese public with the history and legacy of Western mystery fiction, and was one of the first writers to find success writing such stories in Japanese. When it comes to getting a handle on his own literary endeavours however, such inherited genre tags prove woefully inadequate.

Taking inspiration both from the logical detection of Conan Doyle and the morbid preoccupations and high concept vignettes of his other primary influence (and if you’re wondering who that was, just try saying his pen-name out loud a few times in a Japanese accent and see what emerges), Rampo added a far stronger strain of eroticism to the mix, along with a perverse sense of the absurd that was entirely his own. Soaking the results in the richly decadent atmosphere of Taishō era Tokyo and the weird imagery of Edwardian pulp magazines, Rampo created a unique literary aesthetic whose essence was succinctly encapsulated by the handy genre tag of ero-guro-nansensu – ‘erotic grotesque nonsense’.(2)

Framed in the entrance-way of the Rampo house, visitors can see a roughly scribbled manuscript in which the author attempted to list and categorise his favourite Western detective stories, isolating the elements and formulas that he fed into his own work. On the opposite wall, a beguiling modern painting inspired by Rampo’s writing can also be seen. [UPDATE: this is likely the work of Masayuki Miyata - see comments.] 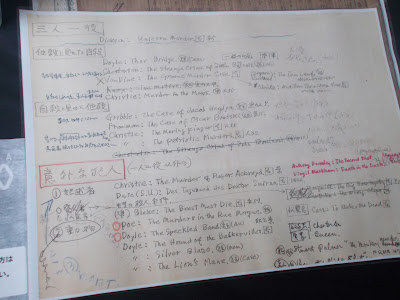 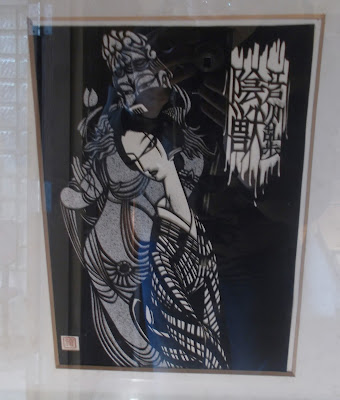 Although most of the house itself is off-limits to casual visitors, numerous windows are packed with displays of Rampo memorabilia, including many rare editions of his work. 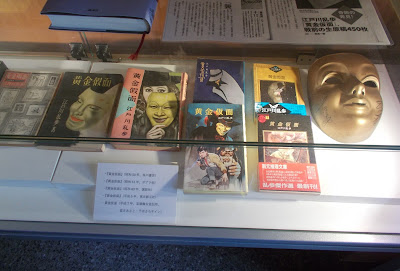 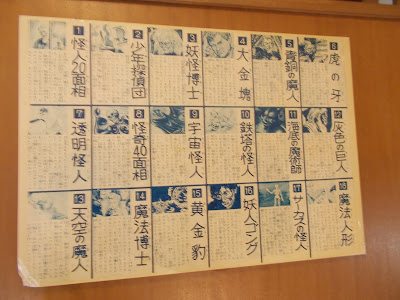 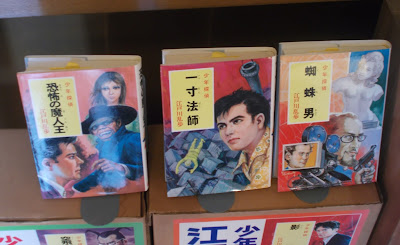 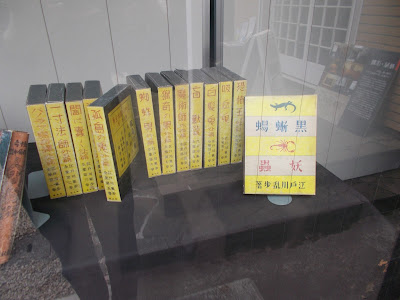 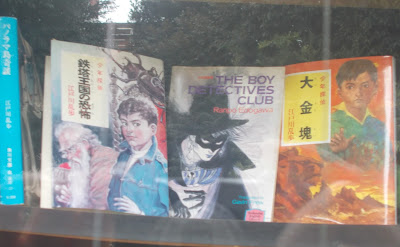 The books seen in the final photo above help to remind us that, despite his fixation with weird sex and death, Rampo also enjoyed a parallel career as a highly successful children’s author, concocting numerous adventures for his Shōnen Tantei-Dan (“Boys Detective Club”) – a set of stories beloved of generations of Japanese children, and still widely read to this day.

The French windows at the rear of the Rampo house allows visitors to see directly into Rampo’s living room / study, which is preserved in exactly the manner in which he left it following his death in 1964. A finely appointed room, no doubt about it, and I got a particular kick out of seeing the dusty boxes of Japanese and Scotch whisky displayed side by side on his writing desk – a nice visual metaphor for the East-meets-West nature of his writing, not to mention it’s combination of aesthetic refinement and primitve shock. 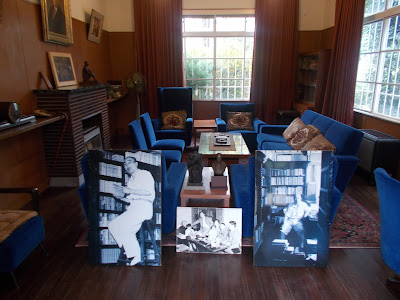 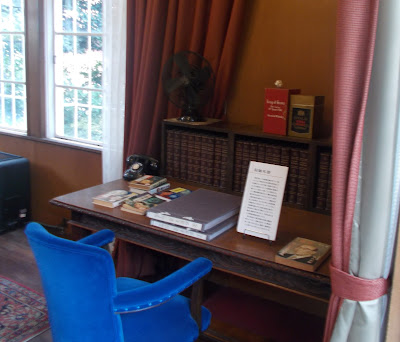 As we were gawping at this living room, a young archivist appeared from within, clad in a light-weight kimono with slicked back hair and old fashioned glasses, looking as if he could have stepped straight out of one of Rampo’s stories. Offering us tea, he asked us whether there was any particular aspect of the master’s work we would like to discuss, or any documents we would like to consult. It was with great sadness that, due to our tight schedule of tourist-y business and my extremely minimal comprehension of spoken Japanese, we were forced to decline his offer on this occasion.

We did of course though find a few minutes to venture further into the grounds to have a look at Rampo’s purpose-built library / warehouse. Described by the author as his “illusory castle”, the walls of this unique structure are reinforced with layers of earth and, apparently, recycled Edo Period literature. According to Rampo’s Wikipedia page, the building even survived the allied firebombing that destroyed much of the surrounding area in 1945. 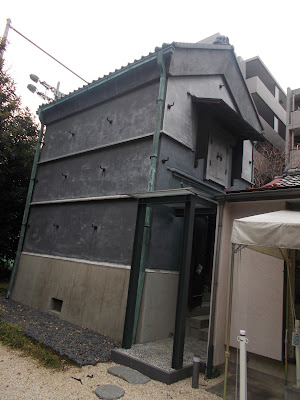 An obsessive bibliophile by anyone’s standards, Rampo’s library is said to comprise some 20,000 volumes in both Japanese and English, presumably including his legendary collection of homoerotic literature. Again, public access is strictly limited, but peering through the viewing window in the front door did at least give us an idea of the kind of riches housed within. 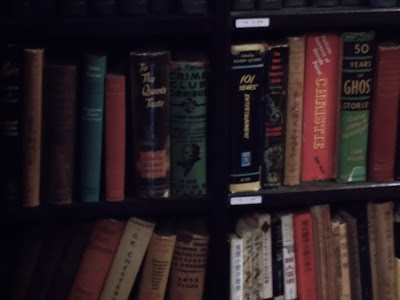 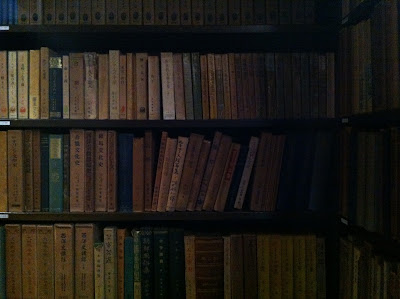 Happily, English editions of Rampo are widely available (Tuttles’s Japanese Tales of Mystery and Imagination and Kurodahan Press’s Black Lizard & Beast in the Shadows both look like good bets), and those seeking an easy way into the spirit of his work are also advised to check out some of many excellent and somewhat disturbing movies extrapolated from his stories (the aforementioned ‘Horrors of Malformed Men’, Kinji Kukasaku’s Black Lizard and Noboru Tanaka’s Watcher in the Attic all come highly recommended). You could also seek out Suehiro Maruo’s sumptuous manga adaptation ‘The Strange Tale of Panorama Island’ (published in translation by Last Gasp), or, for a somewhat quicker fix, try hitting play on the following cheery credits sequences for two different TV iterations of the much-loved Boys Detective Club.

(1) As you may have noted, Edogawa’s name can be romanised either as ‘Ranpo’ or ‘Rampo’ – both are used seemingly interchangeably, but I think I’ll go for the latter, just because it sounds more fun.

(2)Officially defined as spanning the years 1912 to 1926 (the reign of the Emperor Taishō), culture during the Taishō period is often characterised in a manner that seems reminiscent of Weimar Germany, as art and literature became increasingly introspective, imaginative and transgressive, displaying an aesthetic elegance and sense of escapism that often sits uncomfortably alongside the period’s political turmoil and the rise of the fanatical nationalism that would eventually drive Japan into the Second World War.

This is a fascinating piece. I need to reed more Rampo.

I may be wrong: I can't read Japanese, so I have no idea what the ideogram at the bottom right of the picture says, but that "painting" looks like a kiri-e piece (layers of intricately cut paper) by Masayuki Miyata: He certainly did at least on Rampo cover, for 'Hell's Clown' (https://s-media-cache-ak0.pinimg.com/736x/61/fb/97/61fb974da0114de026d6f20b7533da9e.jpg). More about him at https://www.pinterest.com/janineboue/masayuki-miyata or http://causticcovercritic.blogspot.com.au/2009/02/masayuki-miyata.html

Thanks JSRM - always nice to hear from you, and sorry for the delay in approving your comment (I've been away from the computer for a few days).

That painting does indeed look like the work of Miyata - thanks for the tip-off, and I'll add a note in the post text. Really like his style, needless to say, and there's some great stuff in those links.