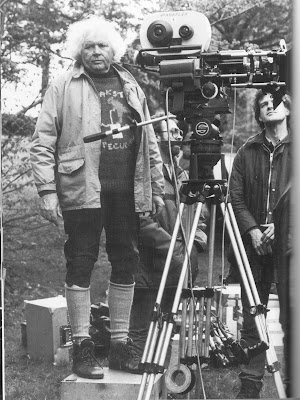 Ken Russell has actually been on my mind a lot recently, partly thanks to the BFI’s announcement that they’re finally releasing The Devils on DVD next year, and partly due to their screening of his rarely seen feature debut ‘French Dressing’ that I attended a couple of months back – very much a ‘failure’ of a film, crippled by a dreadful script and misguided production decisions, but one that I nonetheless very much enjoyed, largely thanks KR’s superb photography and lively visual imagination.

Both these events have served to get me thinking about just how *great* Ken Russell is (sorry, was : ( ), and how relatively underappreciated his contribution to British cinema has been over the years. Prior to today’s sad news, I had already decided that I should make an effort in 2012 to catch up on some of his key films that I’ve missed over the years (the aforementioned Devils, Lisztomania, The Music Lovers, Crimes of Passion, Savage Messiah etc), and to track down decent copies of the ones I have seen – basically to become a bit more active in my appreciation of a guy whose stuff I’ve always loved when I’ve happened to stumble across it.

For a director who always had such a scabrous relationship with the cultural mainstream, it’s interesting to note that my knowledge of his films is due almost entirely to seeing them on late night TV, only gradually realising that all these unexpectedly beserk, almost unbelievably intense, motion pictures were the work of the same man.

I guess ‘Tommy’ was probably the first one I saw, and, well… Jesus Christ, I still can’t get over it. I mean, I like The Who, I like daft rock band movies, I really like watching weird films, but I couldn’t even make it to the end – it was just too much, man. I couldn’t believe what I was seeing. How could a movie with this many famous people in it, holding this kind of comfortable, canonical place in popular culture, be so continuously, unrelentingly fucked up?

I tried to watch it a second time shortly afterwards and made it to the bit where some biker gangs are staging a war in a quarry or something, and a shirtless Roger Daltrey flies overhead on a hang glider, singing about how they should put their differences aside and revere him as their saviour, at which point, after an hour or so of feeling like I was being continuously kicked in the brain with a hob-nailed boot, I…just…couldn’t take it any more. I still don’t know what happens at the end. I dread to think. But that’s Ken Russell for you – too much is never enough. For anyone who’s never seen one of his films, it’s difficult to communicate just how completely indigestible, how utterly excessive, how bat-shit crazy they really are. They never settle down. Even the most commercially successful and critically approved moments in his filmography have never become anything resembling comfortable viewing.

It was probably boredom that drove me to watch ‘Women In Love’ on TV one night, and it completely blew me away. I suppose that within the context of Russell’s career it’s probably one of his more restrained works, but still, I remember it as a beautiful, intoxicating, almost psychedelic experience that had me setting out the next day to pick up a pile of the D.H. Lawrence paperbacks I’d been strenuously avoiding in second hand bookshops for years, in the hope that they might convey some of the same spirit. With no disrespect to DHL, they didn’t. What I loved about the film was Ken Russell all the way.

Fast forward a few years, and OMFG you guys, remember that incredibly f-ed up movie we saw during one of those All Tomorrow’s Parties festivals in the early ‘00s? That one where William Hurt hangs out with this shamanic tribe in South America, takes super-strong hallucinogenic drugs and fucks a gila monster to death, then comes home and takes loads of them again in an isolation chamber, regressing so far into his primitive subconscious that he actually turns into a caveman, breaks into the local zoo and eats a goat…? Yes, it was ‘Altered States’. And no, I shouldn’t have been surprised when Ken Russell’s name scrolled across the screen as we sat there slack-jawed at its conclusion.

And so it went on - ‘Gothic’, ‘Lair of the White Worm’ – it seemed like this was a guy who rarely lent his name to a film that was anything less than grotesque, astounding, monstrous and mind-blowing, and an overriding belief that Ken Russell Is The Motherfucker has been etched in my book of cinematic truths ever since, regardless of how misguided some of his career choices may have been, or how lazy I’ve been in actively exploring his catalogue.

My sole reference point for assessing Russell as a person is one of my all-time favourite £1 charity shop finds, a copy of his 2001 book ‘Directing Film’. Supposedly a practical how-to guide to the process of directing a feature film, it immediately degenerates into a stream of conscious tirade of griping, boasting, score settling, long-winded anecdotes and barely concealed attacks on assorted actors and recent Hollywood hits – cranky, rude and self-aggrandising from start to finish, I think it’s a great read.

Over the years, I’ve heard a number of people express the opinion that Russell was a deeply unpleasant man, and whilst I’m unable to really offer an opinion in either direction, I would at least venture to suggest that he was the kind of deeply unpleasant man we could use a few dozen more of in the ‘creative arts’ at the moment.

Because seriously: alongside Michael Powell, I think Russell is the closest thing we in Britain have ever had to our very own equivalent of a Fellini or a Lynch or a Jodorowsky or a Herzog – a truly uncompromising, visionary maniac, an incredible talent on both an artistic and technical level, and, specifically from our point of view on this weblog, a man who stands in the front row of the global pantheon of truly weird filmmakers.

I’d say something like “let’s remember him in a way he would have appreciated”, only I suspect that would probably have involved not just a few sympathetic newspaper obits and fanboy blogposts, but a cast of thousands out on the streets blaring trumpets, whipping dwarfs, setting fire to public buildings and bowing down before to a giant strobe-light hologram of his face projected across Trafalgar Square, or somesuch. Hey, maybe we should do that! Uh… anyone..? 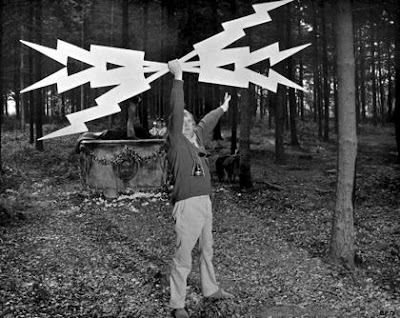 The man also left us some hilarious director commentaries. The one on my WHITE WORM DVD is better than the film itself... and I like the film, at least enough to have it on DVD.

That said, Ken's big issue was that overkill thing. You have to be careful not to deaden the audience's pulse too fast or they just lose interest no matter how much crap you throw on the screen. But the man was, as we used to say, a 'high brother' and I know he'd appreciate this cheeky but respectful tribute.

Thanks, Ben. The key word seems to be "indigestible" - Mr. Russell's films always seemed to be too much and required going back to more carefully sample them. I got through Tommy the first time and found most of his work, once you got past the sensationalism, surprisingly moving. The Devils, beyond it's hysterical trappings, is a quite controlled piece of work imho, and I enjoyed his late '80s period too (Lair of the White Worm, Salome, Gothic).

You're right, we need more of his kind. Cheers, Roger

Unfortunately from what I've heard the BFI release of The Devils will be a heavily cut version.

Thanks for your comments all - much appreciated!

Without witshing to start a ruckus, I think it's probably a misnomer to say that the BFI release of The Devils is "heavily cut" - as I understand it, the version they're releasing is the one first submitted to the BBFC in 1971 and awarded an X cert - eg, the longest version that ever played in cinemas.

Almost all the material not in this cut was voluntarily removed by Russell to ensure certification, and has apparently subsequently been lost/destroyed. As such, you could well argue that even if it was found it would be better used as "deleted scenes" footage, rather than being arbitarily edited back into the main film.

Again as I understand it (obviously I'm going on other people's word here), the only bit of the film notable by its absense is the 3 minutes-ish "rape of christ" sequence, which was included in the 'restored' version that's been screened a few times, but is not in the version that Warner Bros have licenced to the BFI.

Given how awkward and obstructive WB have been in the past about releasing the film, I think I'm pretty happy with that. I hate it when individual shots are randomly removed from movies etc, but I'm assured that the missing sequence here is a 'standalone', and won't damage the integrity of the rest of the film. I'll probably just thanks christ that I've got a watchable version on DVD finally, and look up the missing bit on youtube or whatever.

The rape-of-Christ scene is fairly crucial so it's a pity to lose it. It's a very misunderstood movie. It was not intended as an attack on Catholicism in particular (Ken Russell never abandoned his Catholic faith) or religion in general.

I've only seen the Lair of the White Worm, if I remember rightly I enjoyed it. But after reading what you wrote I'm really wanting to properly watch his other stuff...Bye. R.I.P. K Russell.

Love Russell's movies, was lucky enough to see him present "Savage Messiah". My recommendation as an entry point would be the US only "Ken Russell at the BBC" box set. This is a series of BW documentaries made for the BBC in the sixties. All of the elements that make his films unique are present, but there is an a tightness and intensity about them that I imagine derives from a young director out to make a name for himself dealing with the constraints of time and budget placed on a TV production. Incredible performances from Vanessa Redgrave and Oliver Reed as well. Can't recommend them highly enough.

The single best tribute I saw was a post of the funeral sequence from Mahler. I saw the first part of this on a TV documentary when I was a kid, and I've never forgotten it: