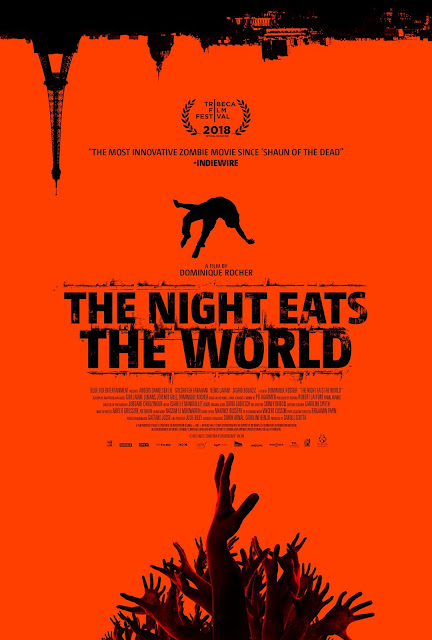 I was kind of in two minds about this one. On the one hand, it certainly starts off strong, as a well-directed and well-shot take on the ol’ zombie apocalypse formula (last-man-on-earth subdivision), with requisite nods to ‘I am Legend’, ‘Night of the Living Dead’ and ‘28 Days Later’ all present and correct, and that gut-wrenching “something dreadful is about to happen” feeling effectively established.

Protagonist Sam (Anders Danielsen Lie), sole survivor of a zombie-crashed house party at his ex-girlfriend’s Paris apartment, initially seems to have reassuringly good survival instincts too - scoping out his surroundings, stockpiling food and weapons and sizing up the abilities of his undead opponents, just as we’d all probably like to think we would in his situation. But, as the film transitions from the straight survival horror of its first act toward a more psychological study of long-term isolation and loneliness, it lost focus and began to annoy me.

Although on one level we’ve got to commend the filmmakers for having the foresight to essentially make a lockdown movie in 2018, their protagonist’s predicament never really rings true (see below), and, well… basically, as we spend more time with the man, and as his actions become more irrational and self-indulgent, we begin to realise that he's actually a bit of a dick. Not in a “the filmmakers are challenging us to accept an unsympathetic protagonist” sort of way either, I should specify, but more of a “this character is the fimmakers’ idea of a relatable, everyday guy, but frankly that guy is a tosser” situation. And when you’re watching a film with only one character, that’s kind of a problem.

Also, despite the film's painstakingly naturalistic, contemporary setting, the apocalyptic scenario it is asking us to accept begins to seem more ridiculous, the longer you stop to think about it.

By which I mean - a crucial element of this film is that its zombies are not capable of breaking through locked doors. Our protagonist survives the initial, nocturnal zombie attack because he is unconscious in a locked room. When subsequently reclaiming the apartment block, he simply secures the exterior doors and windows, and is safe for the duration.

So far so good, but, given that MOST people essentially spend their nights asleep behind a locked door or two, and probably tend to at least look out of the window in the morning before they step out for a stroll... surely there would be loads of survivors? The idea that everyone else in the city has been wiped out overnight by zombies with less agency than feral animals is patently absurd.

Likewise, despite the movie being set in the late 2010s present day, no one in this apartment building seems to have owned a computer, or a TV, or even a radio. Instead, like our painfully hip, DIY musician protagonist, the residents seem to have favoured cassette tapes (so retro and chic, y’know?). Conveniently, this allows him to bop around the empty rooms using up the batteries on a walkman he reclaimed from a ‘punk’ teenager’s bedroom (in 2018? really??), instead of, say, using his smartphone to try to contact the outside world. (You see what I mean about this whole ‘dick’ thing?)

In fact, he briefly checks his voice messages on his phone during the first morning, establishes that his nearest-and-dearest are dead, then abandons it. I get that “isolation” is the film’s watch-word, but the idea that he wouldn’t have at least tried to find out what was happening in the wider world whilst the electricity was still running is difficult to accept.

Of course, I don’t mind directors bending a film’s world to suit their own needs in a movie whose presentation is pulpier or more fantastical, but given this one’s absolute realist aesthetic, the failure to address these issues just seems like an insult to the viewer’s intelligence - a wilful refusal to provide us with the information we need to make this story work for us, on either an emotional level or a purely narrative one.

My wife, incidentally, has already christened ‘The Night Eats the World’ “that emo zombie movie”, and whilst I wouldn’t go that far in my criticism (I thought it had its moments), I get where she’s coming from.