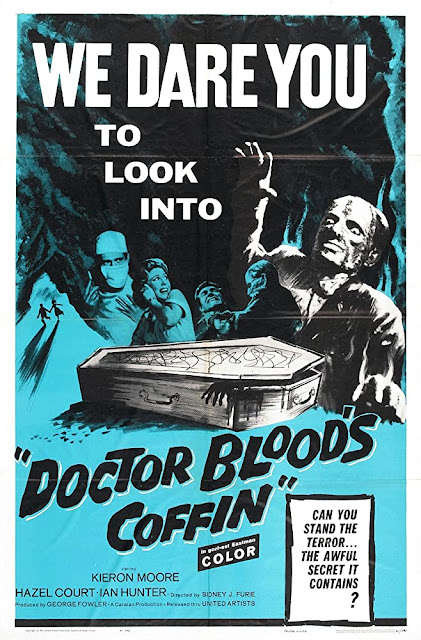 Following a move to London at the dawn of the 1960s, the first project young Canadian director Sidney J. Furie got off the ground was the off-brand horror picture about the son of the local GP in a picturesque Cornish village performing Frankensteinian resurrection experiments in an abandoned tin mine.

Echoing the predicament faced by Furie himself to a certain extent, the film finds Dr Peter Blood (Keiron Moore) cheerily skipping back into the quiet life of his father Robert (Ian Hunter - not the Mott The Hoople guy, needless to say) after four years spent studying bio-chemistry in Vienna.

Given that the re-appearance of Dr Blood Jr. neatly coincides with a rash of mysterious disappearances in the local area and repeated thefts of medical equipment from his father’s clinic, few viewers will be surprised to learn the it is the younger doctor’s ‘coffin’ we’ll soon be peering into, in spite Moore’s bland, leading man good looks.

There is a certain amount of promise here - not least the somewhat novel idea of wrapping up the romantic lead and the mad scientist within the same character. Unfortunately however, Nathan Juran’s script proves decidedly ropey throughout.

Full of excruciatingly poor dialogue (“Do you know that I had analysed the protein value of an acorn by the time I was six?”; “You want me to deny God and instead kneel down and worship a new God - science!”) and low level absurdities (why do a bunch of blokes who look as if they’ve never left the local area in their lives need to rely upon guy who’s just returned from four years overseas to lead them through the local caves?), Juran’s tale also, fatally, retains some long stretches of uneventful tedium in its first half, instantly consigning ‘Doctor Blood’s Coffin’ to the status of half-remembered ignominy within the Brit-horror canon.

Given that Juran was better known as the director of ‘The Deadly Mantis’ (1957) and ‘Attack of the 50 Foot Woman’ (1958), it makes sense that (according to Jonathan Rigby’s English Gothic, at least) his script originally took place on the other side of the Atlantic, in an Arizona mining town. Quite why Furie went to the trouble of importing and anglicising this unpromising potboiler though is another matter entirely.

The story’s American roots can perhaps be glimpsed through the actions of Kenneth J. Warren’s policeman character (it’s incongruous to see an English copper organising the occupants of the local pub into a posse on the slightest pretext, and yelling down the phone that he needs “twenty armed men” to form roadblocks), but for the most part it seems to have survived the Transatlantic crossing surprisingly well - which is a shame in a sense, as some out-of-place Americanisms might at least have livened things up a bit.

By the time he got around to directing ‘The Ipcress File’ a few years later, Furie had reinvented himself as a mod-ish, cinematic stylist, but unfortunately there’s little sign of that ambition here, as he approaches his craft with dogged, nailed-down-camera conventionality, seemingly imitating that static, old fashioned style which Hammer’s Terrence Fisher was often (rather unfairly) accused of perpetrating.

On the plus side however, the whole thing is at least handsomely realised despite its presumably low budget, utilising some absolutely splendid - very early '60s - colour photography to highlight the picture-postcard shooting locations. (I’m obliged to mention at this juncture that Nicholas Roeg served as camera operator under ‘Zulu’ DP Stephen Dade.) Meanwhile, the film also benefits from a propulsive, Hammer style orchestral score, courtesy of Buxton Orr and the ubiquitous Philip Martell, which helps considerably with the pacing issues.

Though the cast boasts no big names, a few of the supporting players will be familiar to more discerning British horror fans. You’ll recall the aforementioned Mr. Warren for instance for taking work which should rightly have gone to Milton Reid in the likes of ‘Demons of the Mind’ and The Creeping Flesh, whilst Fred Johnson - here playing a Hugh Griffiths-esque undertaker - also essayed “old geezer” roles in ‘The Curse of Frankenstein’, ‘City of the Dead’ and ‘Brides of Dracula’ amongst others.

Most significantly of course, our leading lady (indeed, the ONLY lady on the cast list) is Hazel Court. Playing widowed nurse / mad doctor love interest Linda, she brings a strong and radiant screen presence, but her noble efforts are probably best consigned to the “does her best with a thankless part” file.

The film’s horror content meanwhile is slow to make its presence felt, but, clearly inspired by Hammer’s success in the field of medical horror, there are a few bits of ‘Curse of Frankenstein’-inspired surgical grue, including some gruesome beating heart close-ups and so forth. This is all framed by Furie without a great deal of additional, atmospheric fuss, as if he believed that success within the genre was entirely predicated upon proximity to corpses and body parts.

This approach lends the film a rather morbid, unsavoury aura, despite its relative mildness, which reaches its apex during the conclusion, when, in a fit of spurned petulance, the younger Dr Blood digs up Hazel's dead husband, who's been mouldering in the grave for over a year, and actually sticks a new heart in what's left of him. Yuck!

As a horror film, I found ‘Doctor Blood’s Coffin’ to be entertaining enough in an undemanding sort of way, despite its myriad weaknesses - perfect for the Monday night on which I chose to watch it. What I enjoyed most of all about the film though was actually its extensive use of Cornish locations.

[The evocatively named hamlet of Zennor, near St Ives, largely stood in for village, whilst the cliff-top ruins and abandoned mine workings were played by beauty spots near St Just and Botallack - a full breakdown and a wonderful set of ‘then and now’ photos can be enjoyed on the Reel Streets website.]

As well as looking absolutely beautiful in their own right under the nigh-on atomic glare of Dade and Roeg’s Eastman Colour lighting, the village exteriors provide a wealth of time capsule-worthy period detail, which I’m sure anyone who grew up in a similarly remote corner of the British Isles should be able to enjoy. (Athough this was of course considerably before my time, the Hillman touring cars, the curtain fabrics and Court’s costumes, even the occasional glimpses of the village shop, all provide a shudder of tribal recognition.)

Even during the film’s longueurs, there’s a certain pleasure to seeing familiar actors trudging about these out-of-the-way provincial locations, so rarely visited by British genre films, which is worth the entry price alone. (In this regard, I’m reminded of the even more mundane and uneventful ‘Night of the Big Heat’, filmed in Dorset and Buckinghamshire a few years later.)

In fact, I’m even go so far as to say that gazing upon the quiet cottages of Zennor circa 1961 gave me a real twinge of sadness, reminding me that I've not been able to make it out to the coast or the countryside at all this year. All the while, the memories of earlier days and older ways of life, fleeting captured on celluloid here as an incidental backdrop to the clumsy tale of Dr Blood gadding about with his chloroform and formaldehyde bothering Hazel Court, fade further out of sight with each turn of the season, buried deeper ‘neath the wheely-bins and people-carriers of the 21st century day-to-day. 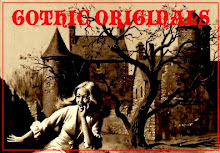 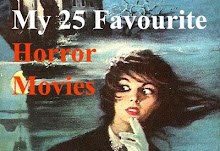