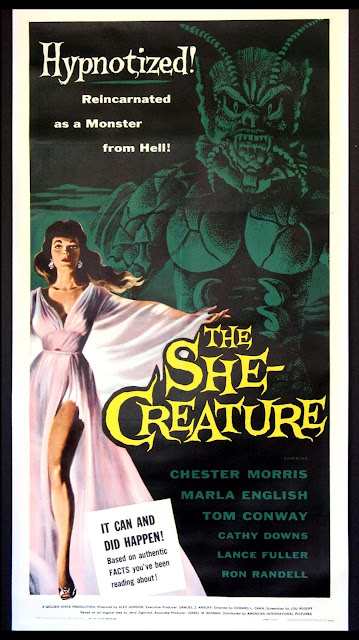 Though it was likely little more than another day, another dollar for ‘50s b-movie workhorse Edward L. Cahn (whom we last encountered on the way back from Mars with It! The Terror From Beyond Space earlier this year), this curious yarn is notable for running with a set of mismatched plot ideas so sketchy and ill-thought-out that they actually go full circle, resulting in a tale whose steadfast refusal to make any damn sense whatsoever leaves it feeling dream-like, inscrutable and obscurely haunting, emerging as one of the more bizarre monster movies mid-century America had to offer.

Seemingly in some kind of southern Californian beach community (although this is never explicitly made clear), ‘The She-Creature’ is able to exploit a range of settings which will to doubt remind modern viewers of such later, brine-soaked classics as Herk Harvey’s ‘Carnival of Souls’ (1962), Willard Huyck & Gloria Katz’ ‘Messiah of Evil’ (1973) and most of all, Curtis Harrington’s ‘Night Tide’ (1960).

First of all, there are the lonely, rocky beaches, where we initially find the mysterious Dr Carlo Lombardi (didn’t he build E.T.?) stalking through the sea-mist, making esoteric pronouncements to himself (“now, on this very night, I have called her from the unknown depths of time itself, she is here”) as he observes a set of sinister, triangular footprints leading up from the surf.

(Chester Morris, who plays Lombardi, had been Hollywood royalty in the era of the early talkies, but was clearly pretty down on his luck by this point - ‘The She Creature’ marks his last feature film appearance until 1970, the year of his death.)

Then, there are the isolated, wood-panelled beach houses in which most of the characters live, which seem to extend in a horizontal line along the beach-front, although we never see more than one of them at a time.

And, of course, there’s the carnival, wherein Lombardi conducts his strange shows, attempting to win converts to his quack transcendental doctrines whilst thrilling punters with live-on-stage past life regression sessions, featuring his psychically indentured hypnotic subject Andrea (Cahn regular Marla English), who seems to spend her non-performing hours reclining in a diaphanous gown upon the stage-set’s altar-like backdrop.

Whereas the films I referenced above though were all shot on real locations, carrying an authentic sense of place as a result, the imagined geography of ‘The She-Creature’s world by contrast feels entirely disconnected from any kind of reality. We see no cars or roads, no streets or infrastructure. The people live in the beach houses. The shore is a realm of mist and monsters. The crashing of the waves never ceases. If the people want to go anywhere, they go to the carnival.

When necessary, cops and detectives appear from somewhere to frown and crack wise, haul off the bodies and (eventually) take ineffectual pot-shots at the monster. But though the wider world is frequently referred to in dialogue, we never see it. To all intents and purposes, the film’s budgetary constraints trap us within a closed, goldfish bowl-like realm - a Malibu gothic ‘Truman Show’, or a Pacific analogue to ‘The Prisoner’s village.

Our hero within this disembodied realm - Ted, played by Lance Fuller - is that rarest of things, a serious, scientifically-minded parapsychologist who frowns upon quacks like Lombardi for bringing his profession into disrepute. I won’t trouble you with the ins and outs of Ted’s relationship with the beach-house dwelling Chappell family, but essentially he’s courting eligible daughter Dorothy (Cathy Downs).

Dorothy’s proto-new age, society wife mother Mrs Chappell (Frieda Inescort) has meanwhile become a devotee of Lombardi’s hypnotic revelations, whilst comically single-minded, amoral capitalist Mr Chappell (Tom Conway, brother of George Sanders, who was playing horror movie cads as far back as ‘Cat People’ and ‘I Walked with a Zombie’) reckons he can make big bucks exploiting Lombardi’s uncanny gift for predicting local murders. So, like it or not, the pencil-moustached man of mystery is a pretty inescapable topic of conversation at the family’s nightly soirees.

Like Roger Corman’s even weirder The Undead from the following year, ‘The She-Creature’ seems to tap into the mania for past life regression therapy which seemed to be sweeping the U.S.A. in the late 1950s (if the plots of b-movies are to be believed, at any rate). In attempting to graft this concept onto the bones of a common-or-garden monster movie, scriptwriter Lou Rusoff apparently gave little thought to even the most elementary notions of scientific understanding, resulting in leaps of theoretical logic which are truly dizzying.

Even leaving aside the notion of a hypnotic subject’s past selves being able to manifest as invisible spirts who can roam around the waking world causing mischief at the hypnotist’s command, by seeking a way to crow-bar a monster into proceedings, Rusoff’s script implicitly invites us to contemplate an entirely new theory of evolution (“..based on the authentic FACTS you've been reading about,” claimed the poster).

Rather than accepting the conventional assumption that primitive, amphibious life-forms moved from the sea to the land at a fairly early stage in their development, gradually developing over the millennia into reptiles, birds and mammals as we know them today, ‘The She-Creature’ instead casually confronts us with the possibility that humanity’s distant ancestors stayed in the water far longer, apparently evolving directly from some monstrous and heretofore unknown species of carnivorous, anthropoid lobster.

The ontological implications of this Nigel Kneale-like revelation are staggering, but naturally no one in ‘The She Creature’ seems to bat an eyelid as Lombardi babbles on to all and sundry about how he’s been able to summon a living, breathing example of this primordial monstrosity from deep within Andrea’s ancient, pre-human subconscious.

Perhaps understandably, most of our characters are more concerned with the more immediate matter of the people Lombardi’s creature keeps bumping off each time it hauls its atavistic, weed-encrusted carcass from the depths of the Pacific. After all, this is a goddamn Edward L. Cahn movie, not some navel-gazing, pinko beatnik speculative science seminar! This thing is eight feet tall, immune to conventional weaponry and can crush a man’s head like a walnut, forgoddsake! What are gonna do again it?!

Built (and indeed occupied) by Paul Blaisdell, the creature suit here may not quite be up to the standard of the one he built for ‘It!’, but ridiculous though it is, it sure makes an impression - those big, choppy claws are convincingly huge, and the insect-like compound eyes and segmented antenna are a nicely horrible touch, ready to give kiddie matinee audiences are serious case of the heebie-jeebies, even as the gnomic vagaries of the film’s script potentially played havoc with hard work their teachers had gone to providing them with a solid grounding in the whys-and-wherefores of life on earth.

Released by AIP, double-billed with Corman’s ‘It Conquered the World’ (also scripted by Rusoff), ‘The She-Creature’ subsequently drifted off into the late-night UHF ether from which one supposes it periodically emerged to pollute the impressionable minds of subsequent generations American youth, accidentally propagating the veneration of weird, primordial lobster gods which we see practiced so frequently on our cities’ streets today.

So, heed the word of Lombardi, and check out ‘The She-Creature’ today - it’s a mist-shrouded subliminal mind-bender for the ages, its wave-crashing, theremin-blasting echoes ringing out through time and space long after its director picked up his lunchbox and headed off to make ‘Runaway Daughters’ and ‘Shake, Rattle and Rock’ back-to-back. 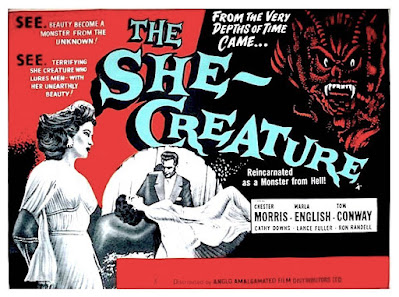 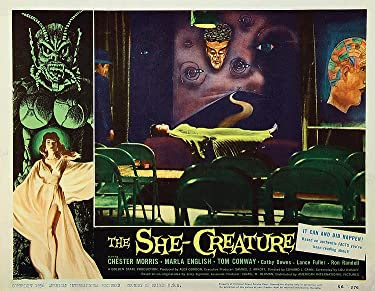