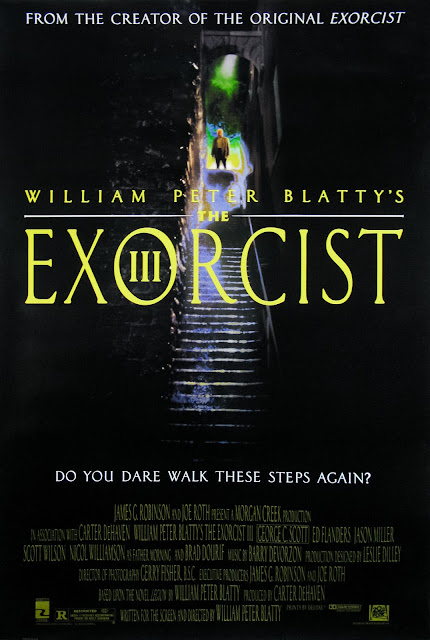 Within the realm of sequel-driven horror franchises, it’s fair to say that the Exorcist series has always been a bit of an outlier. Admittedly, it got off to an earlier start than most of them, and began from a far higher level of critical acclaim and self-serious artistic intent - but still.

In stark contrast to the “iconic/ground-breaking original followed by reams of (at best) entertaining crap” furrow ploughed by ‘Halloween’, ‘..Elm Street’, ‘Hellraiser’ et al, ‘The Exorcist’ seems to have attracted highly strung, artistically-minded filmmakers like moths to a flame, each determined to fight tooth and nail with the studios to bring their own unique visions to the screen. A strategy which, unfeasibly, multiple generations of studio execs actually seem to have encouraged, even after the ridicule unfairly heaped upon John Boorman’s commercially disastrous ‘Exorcist II: The Heretic’ back in ’77.

Boorman, William Peter Blatty and Paul Schrader may all in turn have lost their battles with the suits, ultimately delivering compromised, imperfect movies which they were never truly happy with, but, viewed with a few decades of hindsight, I believe that these sequels can be viewed as a disparate trilogy of wildly ambitious, unconventional films, each of which I personally find more rewarding than Friedkin’s original (which I’ve never really cared for, truth be told).

All of which is a long-winded way of getting around to the fact that I watched the theatrical release cut of Blatty’s ‘The Exorcist III’ [pedants will wish to note that it had not yet gained the ‘Legion’ sub-title applied to the later reconstruction of the writer/director’s preferred cut at this point] for the first time last month, and, though it can’t hold a candle to the weird majesty of ‘The Heretic’, I nonetheless enjoyed it a hell of a lot more than I was expecting to.

Although Blatty’s high-minded thematic concerns to some extent fall by the way-side here, that’s fine by me, as again, his particular brand of existential Catholic dualism has never really floated my boat. But, when it comes to the more down to earth matter of making a Bloody Good Horror Movie, it’s difficult to watch ‘Exorcist III’ and not conclude that this gentleman had the chops.

In purely audio-visual terms, the writer/director’s approach to this task basically seems to have consisted of throwing in way too much of everything. Every single thing in this movie is creepy and foreboding and upsetting and scary, and every time there's a chance to throw in a jump scare or a disembodied demon growl, you're damn well gonna get one.

Outside of some suitably evocative Washington DC location work, settings here run to lofty, shadow-haunted churches, forced perspective hospital corridors and sombre, steel-shuttered asylums - all photographed by DP Gerry Fisher in a drained, colourless palette which may be tediously familiar to us these days, but must have seemed a pretty fresh approach back in 1990.

(It’s interesting to note that Adrian Lyne’s ‘Jacob’s Ladder’, the other film which immediately springs to mind as a precursor to this now ubiquitous grim-dark, institutional aesthetic was also released in 1990.)

Barry De Vorzon’s score of course also deserves a big shout-out in this regard. Presumably asserting a huge influence upon post-2000 horror movie (and indeed video game) music, the composer’s relentless soundscape of treated, disembodied vocal textures, rusty gate shrieks and bowel-shaking rumbles pretty much defines the kind of thing which would become de rigour for straight-faced horror in the wake of Kenji Kawai’s soundtracks to Hideo Nakata’s ‘Ring’ films a decade later.

THAT hospital hallway scene (if you’ve looked up anything horror movie-related on Youtube in the past decade or so, you’ll know it) is of course the film’s unquestioned cinematic highlight, but viewed in context, it forms part of a steady succession of exquisitely nerve-jangling sequences spread across the opening two thirds of this picture, each executed with a seemingly impossible mixture of Lewton-esque restraint and utter, baroque excess.

In terms of plotting meanwhile, I’m happy that Blatty chose to entirely dispense with the old “possessed little girl” routine here, as the “occult crime story” angle extrapolated from his source novel is a lot more fun all round.

The movie-obsessed Lieutenant Kinderman (previously played by the late Lee J. Cobb) is my favourite character in Freidkin’s ‘Exorcist’, so it’s great to see him return as the protagonist here, and even greater that he seems in the interim to have transmuted into the gargantuan figure of George C. Scott.

As a life-long devotee of the ‘Go Big’ school of acting, Scott has always been a favourite of mine, and he here delivers what must surely count as one of his absolute best late-era performances, taking his usual ‘simmering human pressure cooker’ thing to a whole new level, playing it taut and low key during his character’s most emotionally trying moments, before boiling over and completely losing his shit when we least expect it. As a showcase of repressed rage, hardboiled, craggy compassion and a dogged determination to resist the rigours of age, it’s pretty awe-inspiring stuff.

Opposite Scott meanwhile, our resident demonically-inhabited, body-jumping psychopath The Gemini Killer (Brad Dourif, with a little bit of help from the first movie’s Jason Miller) boasts the most ridiculous collection of show-boating serial killer trademarks I've ever encountered pre-‘Silence of the Lambs’.

Not only does he only kill people whose names begins with ‘K’, but he uses an extremely obscure, specialist drug to paralyse his victims, cuts off a certain finger from each hand, draws astrological symbols on their backs, and replaces pieces of their bodies with vandalised religious paraphernalia! Man is certainly not short of ideas.

In fairness to Blatty though, I suppose this convoluted MO does indeed represent the kind of symbolic cluster-fuck which I suppose might occur should an already thoroughly coo coo killer end up bouncing around the same bonce with a host of demons and the restless spirit of a tormented priest.

As heavy-handed as some of these story elements may seem though - and as ‘on the nose’ as the director’s favoured imagery of mutilated statuary, demonic crucifixions and angelic visitations may be - this is all balanced out to some extent by Blatty’s deeply eccentric approach to screenwriting.

Drawing on his oft-forgotten background as a scripter of screwball comedies, he seems determined to leaven the metaphysical hand-wringing we’d expect of an Exorcist movie with frequent excursions into high stakes, oddball humour and touches of quasi-Lynchian surrealism which I’m surely the studio must have considered totally ‘off-brand’, as well as seeding the movie with a dense tapestry of synchronicitous inter-textural referencing, touching on everything from Conrad’s ‘Lord Jim’ to the Rider Waite Tarot deck to Powell & Pressburger’s ‘The Red Shoes’ and (believe it or not) Mel Brooks’ ‘Space Balls’.

We could perhaps glimpse this trait to a certain extent in the first film via Kinderman’s cinephile banter, and it was given free reign in his directorial debut ‘The Ninth Configuration’, but it’s really turned up to eleven in ‘Exorcist III’.

The sheer density of Blatty’s dialogue can take a while to get used to, and I’ll freely admit that I was more or less instantly lost by the early scene in which Kinderman obliquely criticises his fellow officers for their racism and lethargy by angrily throwing passages from ‘Macbeth’ in their general direction. Once you get into the swing of it though, it brings a really unique feel to proceedings, adding spice and flavour to what might otherwise have become a pretty po-faced exercise in over-cooked, airport blockbuster bombast.

Speaking of which -- we probably need at this point to address the film’s final act. Shot under duress by Blatty and the principal cast after studio Morgan Creek rejected the anti-climactic conclusion of the director’s initial cut, instead demanding a bit more action and an actual, gosh-darned exorcism, it’s… a bit of a mess, to say the least.

I mean, of all the actors you could have hustled in to play a new character needed for a bunch of pick-up shots for a major studio film with the clock ticking down to release… the legendarily temperamental Nicol Williamson (google up yr own anecdotes) is probably not the man I would have chosen. But, his casting here as hastily parachuted-in bell, book & candle guy Father Morning seems reflective of the sheer level of graft, blundering and back office vanity involved in these reshoots.

Actually, Williamson does perfectly fine work here, adding a certain amount of gravitas to a part that basically amounts to cipher created to satisfy box office expectations, and Blatty directs his scenes with a conviction comparable to the main bulk of the film. Sadly though, neither of them are a match for the risible hullaballoo of snakes, flame-pits, elderly, levitating Oscar winners, glowing gateways to hell, spectral crucifixes, indoor hurricanes and general shrieking hysteria which the producers apparently deemed necessary to provide the punters with the requisite bang for their buck.

Kinderman, had he been able to peel himself off the special effects-drenched cell walls at some point during these proceedings, might well have returned to The Scottish Play and muttered something about “sound and fury” - and indeed, this whole ridiculous finale only serves to confirm my suspicion that, despite Blatty’s noble efforts, ‘Exorcist III’ doesn’t really succeed in saying anything terribly profound about anything (in this cut, at least).

Viewed purely as a horror movie though, for the most part it is absolutely cracking stuff. Imaginative, unconventional, viscerally effective and often brilliantly executed, it now also has the added advantage of feeling extremely prescient, vis-a-vis the ways in which the genre has developed in subsequent decades.

To not put too fine a point on it, prior to 1990 very few horror films looked or sounded like this one. After 2000, they pretty much all did. Coincidence? Just ask all those kids currently at film school who probably spent their formative years watching SCARIEST EVER MOVIE SCENE eight thousand times on Youtube, then consult with Blatty’s restless spirit re: thoughts on Playing The Long Game.