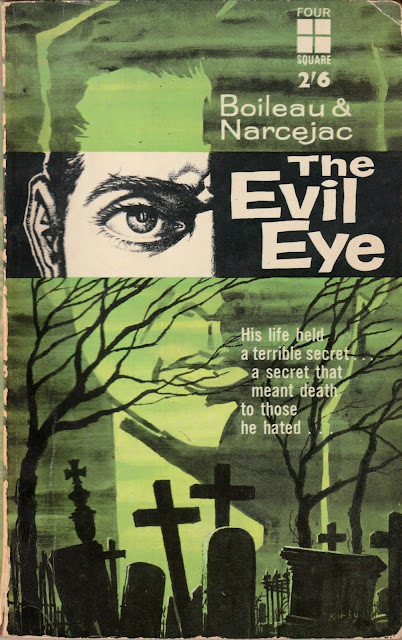 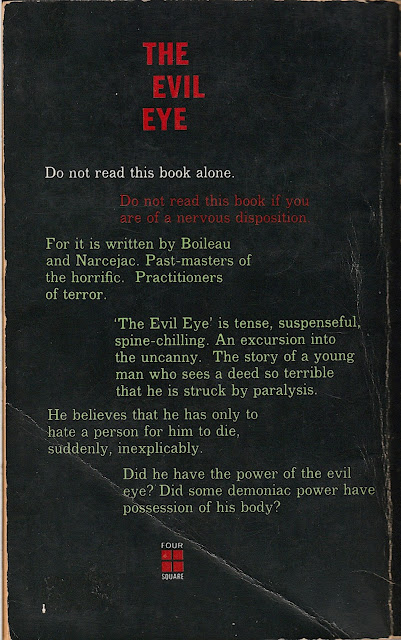 Before being subsumed into our dearly beloved New English Library at some point in the 1960s, paperback imprint Four Square published a wide variety of interesting stuff, including a lot of obscure and/or sought after titles (often in translation) which have rarely been reprinted since.

Four Square books also often featured bold, attention-grabbing artwork, of which this fabulous, comic book style ink & watercolour number from acclaimed SF/fantasy illustrator Josh Kirby provides a perfect example [the signature in bottom right confirms this as Kirby’s work, although it looks drastically different from his later, better known style]. As such, obscurities from the company’s long-lost back-list have done much to liven up second-hand book shopping in the UK across the decades, although collecting them can also prove a frustrating experience.

Due to their especially cheap binding (or so I’m assuming), Four Square’s paperbacks have a tendency to look reasonably well preserved on the outside, but to crack and fall to pieces, scattering dried out pages to the four winds, as soon as some poor fool tries to read them. Thankfully I just about managed to make it through ‘The Evil Eye’ without destroying it in the process, but… I’m not sure that many future readers will get a chance to enjoy the charms of this particular copy, let’s put it that way.

In the English-speaking world, Pierre Boileau (1906–1989) and Thomas Narcejac (1908 –1998) will almost certainly get more name recognition from film fans than literary types. With their names appearing ominously on the writing credits of Clouzot’s ‘Les Diaboliques’ (1955), Franju’s ‘Les Yeux Sans Visage’ (1960) and Hitchcock’s ‘Vertigo’ (1958), its safe to say that the duo’s residual influence has sunk deep into the very bones of the horror and thriller genres, as well as those of auteur and arthouse cinema more generally.

Back in France of course, Boileau-Narcejac are equally remembered for their achievements in the field of putting words together on the page, but for whatever reason, translations of their work have remained extremely scarce over the years. So, naturally I was keen to take the opportunity to check out some of their prose, despite the risk of the book crumbling to dust in my hands.

It’s probably fair to assume that ‘The Evil Eye’ (‘Le Mauvais Oeil’, originally published in France in 1956) is a minor work within the duo’s oeuvre, weighing in at just over 120 pages, and sadly the horror spin that Four Square’s packaging puts on the material turns out to be almost entirely erroneous, with the protagonist’s suspicion that he is afflicted with the power of the “evil eye” merely numbering among a number of fantasies and delusions which flicker through his unsettled mind through the course of the novel.

In fact, ‘The Evil Eye’ barely even qualifies as a thriller in the conventional sense of the term. What we have here rather is kind of a downbeat, quasi-gothic character study, in the ever-popular “dysfunctional remnants of an aristocratic family bounce off each other in their decaying old house” vein which went on to become so beloved of filmmakers in the late ‘60s / early ‘70s, for whatever reason.

It's a testament however to the talents of Boileau-Narcejac (and indeed to their translator on this occasion, Geoffrey Sainsbury) that this rather morose and uneventful tale actually remains a thoroughly engrossing read, drawing me into the story far more deeply than I suspected it would once I’d got the basic gist.

Our protagonist here is Rémy, a young man who has been paralysed from the waist down since infancy, when his mother apparently died under traumatic yet mysterious circumstances. We join him on the morning when, aged eighteen, and following the ministrations of a questionable ‘healer’ hired by his emotionally distant father, he gets out of bed and walks.

Disappointingly for Rémy, this Lazarus-like recovery prompts surprisingly little jubilation from either his brash, business-minded uncle or the two female servants who have provided him with his only real human contact over the years, and so, largely left to his own devices, he sets out to undertake the long-delayed process of growing up, digging into the inevitable backlog of uncomfortable family secrets in the process.

Intelligent, self-possessed and callously confident, yet at the same time hopefully naïve and chronically lacking in the kind of practical experience which most of us have gained by the time we reach adulthood, Rémy makes for an interesting and complex viewpoint character. Though he is not necessarily an “unreliable narrator” in the usual sense of the term, a lifetime of near isolation has left him with an unhealthily introspective approach to life, and throughout the novel, we’re forced to bear witness as he twists the people and events around him into his own melodramatic, self-centred narrative, unable to understand the feelings of others or to comprehend the more prosaic motivations behind their actions.

Though ‘The Evil Eye’ offers few of the shattering narrative revelations or surprise handbrake turns that Boileau-Narcejac’s cinematic reputation may have led one to expect, its strengths lie elsewhere – in the deceptively complex exploration of character dynamics, and in the cultivation of a richly ominous yet finely tuned atmosphere.

Inevitably, the duo’s writing reminded me somewhat of the precise, descriptive prose of Georges Simenon, even as they push things far further than he would have done, including a few extraordinary, opium-scented flights of poetic fancy which can't help but push the tale toward the eerie, indefinable realm of what we’re obliged in this context to call le fantastique.

For all that it’s essentially a naturalistic, psychological tale in fact, one could perhaps apply a supernatural explanation to the book’s final paragraph ‘shock’ ending. But, this is never directly implied, cleverly leaving readers to map their own beliefs and gut feelings over the plainly recounted events.

All in all then, a surprisingly rewarding few nights reading, well worth making time for if you can manage to track down a copy that’s still in one piece.