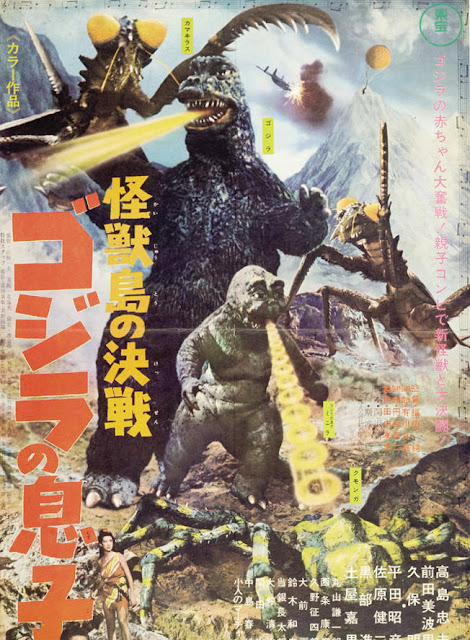 A bunch of giant Praying Mantises!

1.
Ok, let’s begin with a quick show of hands. Who here has seen the original, 1933 ‘King Kong’? Yes, just as I thought, every self-respecting man, woman and child. Now, who has seen RKO’s hastily slapped together 1934 sequel, ‘Son of Kong’? [Cue awkward silence, tumbleweed.] I rest my case.

For whatever reason however, the top brass at Toho studios seem to have overlooked this lesson from history, and verily it was decreed that director Jun Fukuda’s second modestly budgeted addition to the Godzilla franchise would take the form of ‘Kaijûtô no Kessen: Gojira no Musuko’ [‘Decisive Battle on Monster Island: Godzilla’s Son’], better known to the English-speaking world simply as ‘Son of Godzilla’.

As you can imagine, I wasn’t exactly looking forward to this one as I worked my way through Criterion box set of Showa-era Godzilla films, but… sometimes you’ve just got to grit your teeth and hit ‘play’ on these things, y’know? I mean, it’s a learning experience, if nothing else - and having paid something in the region of ten quid for each movie on this set, you’d better believe I’m going to take my seat in the classroom, pencil and paper at the ready, and get what I can from it.


2.
Well, guess what – to my surprise, it turns out that ‘Son of Godzilla’ isn’t all that bad. In fact, it’s pretty good fun all-round. Though clearly a step down from Fukuda’s extremely enjoyable Ebirah: Terror of the Deep, it retains much of the breezy, event-packed charm of its predecessor, and includes some memorable scenes and top-notch special effects.

As in ‘Ebirah..’, the influence of ‘King Kong’ upon Fukuda’s Godzilla films is clearly evident. Once again here, we have a danger-filled tropical island setting, in which a bunch of excitable guys run around getting into scrapes. We have another native girl in peril (actually, she’s the daughter of a long-lost prior explorer this time around), and a primary monster who is more concerned with protecting a vulnerable dependent (his ‘son’ in this case) from the depredations of lesser monsters than he is with fucking the humans’ shit up.

In fact, the film even seems to draw upon the legend of ‘King Kong’s lost spider pit sequence for inspiration, effectively recreating it in the form of a stand-out scene in which our characters tangle with Kumonga, the island’s resident giant spider.

By far the best things in this movie however are the giant praying mantises which regularly pop up to menace all and sundry. Inadvertently created by the humans’ crazy climate experiments (more on which below), these blighters put me in mind of the infamous pulp horror paperback Eat Them Alive, although needless to say they don’t get up to any such nasty business here. Nonetheless, the effects used to realise these creatures – seemingly utilising huge, string-operated puppets, big enough to go toe-to-toe with the man-sized Godzilla suit – are really superb, and the fight scenes in which The Big G tears ‘em apart have a real clout.

3.
Speaking of which, although ‘Son of Godzilla’ does inevitably get a bit goofy and mawkish later in it’s run-time, there’s something pleasingly animalistic and.. non-anthropomorphic?.. about the scene in which ‘Minira’ [as he has been named by fans, though he is never identified as such on-screen] is initially introduced.

It’s certainly a pretty traumatic introduction to the big, bad world for the young ‘un, as he immediately finds himself menaced by the aforementioned mantises, which have been swarming around his big, speckled egg, until daddy reluctantly stomps along to sort ‘em out.

Instead of greeting his new-born with affection though, Godzilla’s first interaction with the little one is to knock him over with an accidental swing of his mighty tail, before he goes huffing and puffing off over the horizon, leaving his mewling bairn to fend for itself.

Though they do later establish a slightly more traditional, audience-pleasing father/son relationship, we’re still basically left here with the perversely endearing idea of Godzilla being a bit of a shit dad – or a dedicated practitioner of ‘laissez faire’ parenting, at best. Lazing around and snoozing whilst the kid is in trouble and/or wants attention, he doesn’t exactly exert himself too hard when it comes to schooling his charge in the ways of giant monster-dom.


4.
Having said that however, if ‘Son of Godzilla’ is remembered for anything, it’s probably for the later scene in which Daddy Godzilla takes his son down to the river for a bit of male bonding and tries to teach him to utilise his radioactive fire breath – but, the best young Minira can initially manage is some puffy little smoke rings. Oh, how adorable!

Which seems a good point as which to stop and reflect on how far we’ve come from the days when those fiery blasts of radioactive death were decimating entire districts of central Tokyo, threatening to obliterate Japan’s shaky post-war reconstruction in one unholy conflagration, and terrified crowds fled in blind panic, and so on.


5.
The biggest question to arise from all this though of course concerns the mysteries of Godzilla’s reproductive cycle, and more specifically, the pressing issue of who the hell the mother might be!?

Needless to say, the film’s screenwriters never deign to address this, which is probably for the best, all things considered. All we know is that, at the point at which our story begins, the big egg containing Minira is just sitting in the middle of this weird island, and Godzilla seems duty-bound to slog his way back toward it in order to reluctantly exercise his solo paternal duties once the kid hatches.

Thus, we’re left with a scenario weirdly reminiscent of the compromised, all-male lineage of Disney’s McDuck family (though we do at least have a direct father-son relationship here I suppose, in contrast to Disney’s fragmented hierarchy of parent-less uncles, nephews and cousins).


6.
In designing Minira, I suspect that the monster effects team led by Eiji Tsubaraya and Sadamasa Arikawa were probably going for the fool-proof “overload of cute” approach which has achieved such consistent success with Japanese audiences across the decades - but, happily, I’m not sure that they quite succeeded.

Limited movement lends a particularly uncanny aspect to Minira’s moulded, baby-like face, complete with painted on eyeballs, and despite the filmmakers having gone to the trouble of hiring a dwarf actor (professional wrestler ‘Little Man’ Machen) to inhabit his suit, he retains a gawky, adult-proportioned posture which never looks quite right, especially as he stumbles over studio rocks, bawling in an electronically-altered baby voice, reminiscent of Devo’s perpetually disturbing Booji Boy mascot.

He’s a real freak in other words, and naturally this allows us us cynical, grown-up viewers to love him far more than if he were merely some perfect, proto-Pikachu type kawaii monstrosity.

7.
Another significant development which ‘Son of Godzilla’ brings to the franchise is the creation of ‘Monster Island’ – the ecologically unstable tropical archipelago which Godzilla and his pals will be depicted as being confined to in later films, their movements carefully monitored and controlled by the human authorities.

Although the presence of Kumonga the spider suggests that this nameless island was at least slightly monstrous to begin with, its transformation into a full scale kaiju playground seems to have been largely the result of this movie’s human storyline - which for the record is fairly diverting, recalling one of those ‘40s jungle adventure type b-movies in which a bunch of wise-guys hang out in tents in a studio-bound clearing, along with a token dame, an antsy reporter and so forth.

In fact, that’s exactly what happens here, except for the fact that the scientific research team led by Dr Kusumi (Tadao Takashima) have some nice, colourful buildings and advanced laboratory facilities to hang about in as they conduct a series of frankly rather crazy localised terraforming experiments, which seem to involve using some kind of cloud level chemical air-bursts and electro-magnetic pulses to radically alter the island’s climate.

Dr Kusumi speaks grandly of a future in which the problem of over-population can be overcome by fertilising the world’s deserts and so forth, but at this stage at least, his experiments seem reckless and destructive, subjecting the island to intolerable, baking heat (the guys survive indoors with their air-con), and inadvertently causing unforeseen mutations in the local fauna, including the creation of our old friends the giant mantises.

Later on meanwhile, in the film’s oddly touching climax, they decide to blast the place with an icy blizzard, leaving Godzilla and Minira frozen in each other’s arms, no doubt awaiting the next occasion on which Toho will call upon their services to liven up the bank holiday box office. 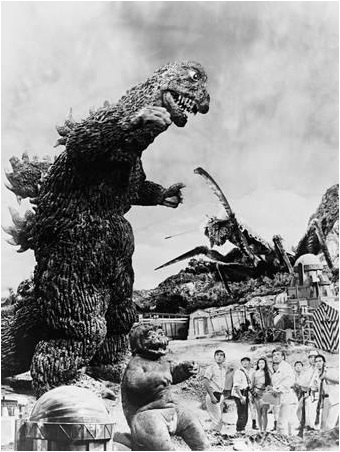 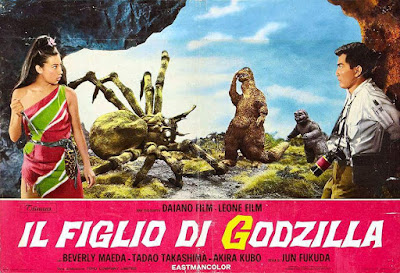 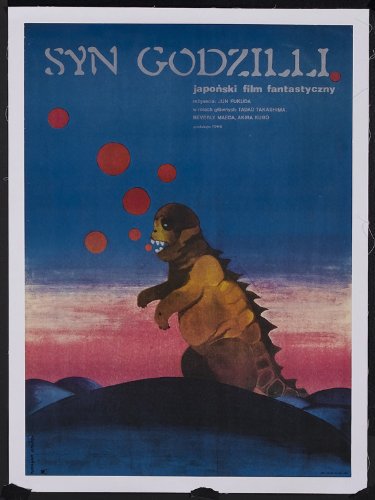