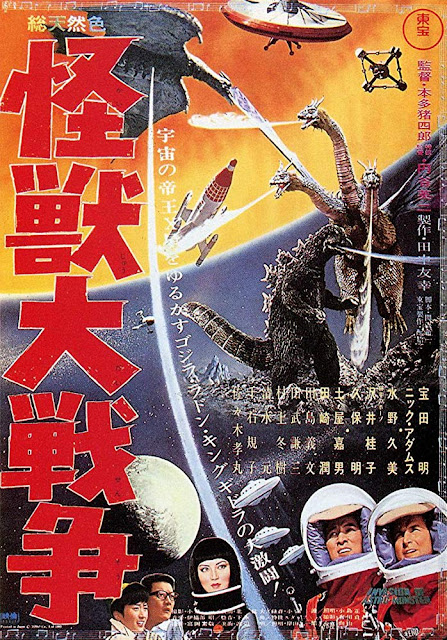 1.
The sixth film to feature Godzilla, 1965’s ‘Kaijû Daisensô’ [‘War of the Monsters’], known to English speaking viewers as ‘Godzilla vs Monster Zero’ or, as Criterion’s box-set has it, ‘Invasion of Astro-Monster’, feels very much of a piece with its predecessor, 1964’s Ghidorah: The Three-Headed Monster. The two films pretty much play as if they could have been shot back-to-back, although shooting dates listed on IMDB and variations in the credited crew suggest this was not in fact the case.

Nevertheless, they both include the same line-up of monsters (minus Mothra this time around – apparently she was initially in the script, but got nixed for budgetary reasons), both feature enjoyably wacky sci-fi storylines, and both are undermined by a lacklustre, kiddie-friendly approach to the requisite kaiju action.

For its opening hour in fact, ‘Invasion of Astro-Monster’ gives little indication of its status as a kaiju movie. Instead, it plays more like one of Ishirô Honda’s straight SF movies, outlining the no nonsense interactions between humanity and a sneaky alien race who have popped up on the newly discovered Planet X, in a manner reminiscent of the director’s 1957 classic ‘The Mysterians’.

2.
On the plus side, a lot of the Showa-era retro sci-fi stuff showcased in ‘Invasion of Astro-Monster’ is really rather delightful. Though these films are ostensibly set somewhere in the vicinity of the present day, the film begins with Akira Takarada and token caucasian Nick Adams (last seen around these parts as the exceptionally grumpy male lead in AIP’s Die Monster Die!, released the same year), manning a rocket-ship en-route to Planet X, which appears to be hanging way out there somewhere beyond Pluto. (Because hey, why not, right? I mean, the way things are progressing here in whizzo 1965, we’ll be shooting square-jawed guys out to the far end of the solar system in brightly coloured rockets before you know it! [2020 sad face. : ( ])

Soon, our astronauts are happily stomping about on the Planet’s rocky surface, and though, disappointingly, they do not encounter The Man From Planet X, they do observe these groovy sort of periscope / stairway things which pop up from under the ground, disrupting their radio contact with Earth, and hear Japanese language loudspeaker announcements informing them that they’re heading down below to meet the neighbourhood’s resident technologically superior alien race.

These guys, it transpires, have been forced underground because King Ghidorah (whom they call ‘Monster Zero’) has ravaged the surface of their world, Reign of Fire style. The Xiliens (as they actually call themselves) thus propose a deal, wherein they will ‘borrow’ Godzilla and Rodan from Earth to help resolve their three-headed space-dragon problem, and in return they’ll give us…. a cure for cancer! Pretty great deal, huh?

But wait! These guys all wear identical black leather jumpsuits, have no discernible facial expressions and wear wavo-type sunglasses at all times, concealing their eyes. As our two-fisted astronauts soon realise, they are clearly not to be trusted. But, back on Earth, the prospect of trading a couple of bad-tempered dinosaurs for the health and happiness of millions understandably proves just too tempting for the powers-that-be to resist.

Indeed, the Xiliens will even handle transport on the deal - which must have come as a relief to the the U.N. mail room staff - and the images I will probably remember most fondly from ‘Invasion of Astro-Monster’ are those of the Xiliens’ dinky little UFOs tracking down our two resident kaiju in their hideaways (Godzilla has been chilling at the bottom of Lake Myojin in Japan’s Nagano Prefecture, for some reason) and transporting them through outer space suing high powered tractor beams. What fun!

3.
This reminds me, incidentally, of an issue that always bugs me in these ‘60s Godzilla sequels – once humanity is aware of their existence, how do the Japanese government seem to keep LOSING these giant, city-flattening monsters during the interim between movies, only to be surprised when they unexpectedly pop up somewhere new?

I mean, even leaving aside the fact that you’d presume an entirely new branch of science must have developed around the necessity of tracking, studying and containing these protean beasts, you’d think that someone would at least take the time to notice a giant and infamous monster stomping his way across a renowned beauty spot and submerging himself in a lake? Instead though, we seem to begin each movie with a round of “hmm, where could Godzilla possibly have gone?”, “oh my gosh, he’s just popped up over there, in another impressively scenic location!”, “ahh, run away, send in the little tiny tanks!”, etc.

I realise that kaiju hi-jinks must have become normalised to a certain extent in this movie-world, and that earth-bound monsters like Godzilla and Rodan perhaps don’t pose quite such an existential threat as they once did, but c’mon guys - the least you could do is keep an eye on them!

4.
The presence of Nick Adams in the cast of ‘..Astro-Monster’ - presumably flown in by Toho in recognition of the Godzilla films’ phenomenal success on the export market – also served to draw my attention to the strong sense of ‘Westernisation’ (Americanisation?) which predominates in these ‘60s kaiju movies – a trend which is particularly noticeable here, as Adams is pointedly established as “one of the guys”, hanging out and bantering (in dubbed Japanese) with his fellow astronauts. (He even offers his Asian buddies some typically forward American romantic advice, although it is he, rather than they, who ends up getting involved with a female Xilien spy – ah, the irony!)

In the original 1954 ‘Godzilla’, you’ll recall, domestic scenes retained the kind of distinctly Japanese character one would reasonably expect of a mid-century Toho or Daiei film, with characters seated at floor level, sometimes in traditional dress, and interacting with their family members in the warm yet somewhat formalised manner which continues to define many Japanese households to this day.

By the time we get to the likes of ‘..Astro-Monster’, or the same year’s truly demented ‘Frankenstein Conquers The World’ (also starring Adams) however, our central characters are predominantly young, single (or newly married) city-dwellers, who are generally depicted as living independently of their extended families, dwelling in groovily-furnished yet anonymous high rise apartments. They wear suits and twin-sets, swap snappy, casual dialogue with their co-habitants, swig highballs or martinis and sit down (at a raised table) to eat steak and chips for dinner.

For viewers familiar with the more traditional, inward-looking Japanese cinema of this era, this lack of a pronounced national identity can at times feel positively eerie, lending an uncanny, alienated aura to the stories’ cheerily two-dimensional human stories. Quite how audience responded to all this at the time, I’m unsure, but it must have been difficult for them not to have interpreted it to some extent as a statement of the filmmakers’ cultural sympathies.

In a sense, Toho could be seen to be taking the ‘borderless’ philosophy adopted by their far smaller rival Nikkatsu [see my posts here and here for more more discussion of this] to a weird new extreme within their sci-fi/monster movies, and the possible reasons for this are many and varied.

Most obviously, this ‘Westernised’ feel could be read as a nod to these films’ proven success overseas, whilst it also seems to me to reflect the grander, ‘worldwide’ and quasi-futuristic, scale of the movies’ subject matter, which often invokes the idea of international cooperation in space exploration or kaiju-fighting.

Beyond this though, I can’t help but feel that gives voice to some extent to the corresponding desire shared by many Japanese citizens in the post-war era for their country to move toward the adoption of a more homogenised [for which read: American] international capitalist culture. In other words, the very same yearning which can be identified in so many of Nikkatsu’s youth films, although it finds a less conflicted, more openly aspirational expression here.

In fact, I can easily imagine Yukio Mishima and his fellow resurgent nationalists absolutely spitting feathers about Toho’s perceived kow-towing to American cultural imperialism in these films, in the unlikely event that they ever found time to go and watch them in between kendo practice and brooding on the finer points of Bushido.

5.
I think it is probably safe to assume that, by this stage in the Godzilla franchise, Ishirô Honda’s heart simply wasn’t in it anymore. Though ‘Invasion of Astro-Monster’ still delivers a wealth of brightly coloured fun for the kids (and the man-child retro-sci-fi enthusiasts alongside them), hitting all the beats one would reasonably expect of a Honda sci-fi movie, a feeling of tiredness and repetition seems to pervade the whole enterprise.

“This is not what I created Godzilla for”, Honda is reported to have icily stated when he saw the ludicrous / adorable ‘victory dance’ Eiji Tsuburaya and his team devised for The Big G to perform after he dispatches King Ghidorah following some half-hearted inter-planetary pushing and shoving at the film’s conclusion. As such, it is perhaps no surprise that the next entry in the franchise saw the venerable director temporarily stepping aside, allowing Toho to bring in a new broom and a distinct change of emphasis, leading, as I recall, to a considerably more satisfactory movie overall… but we’ll see how well my memory holds up on that score in a couple of weeks. 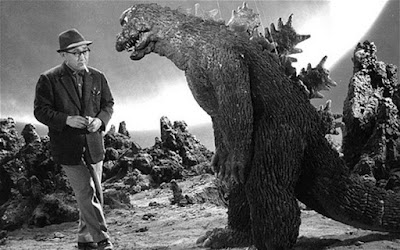 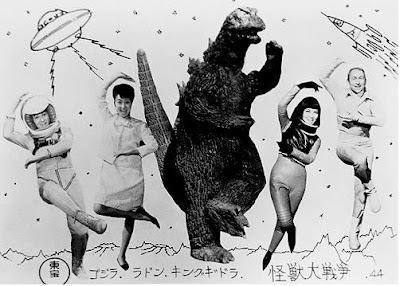