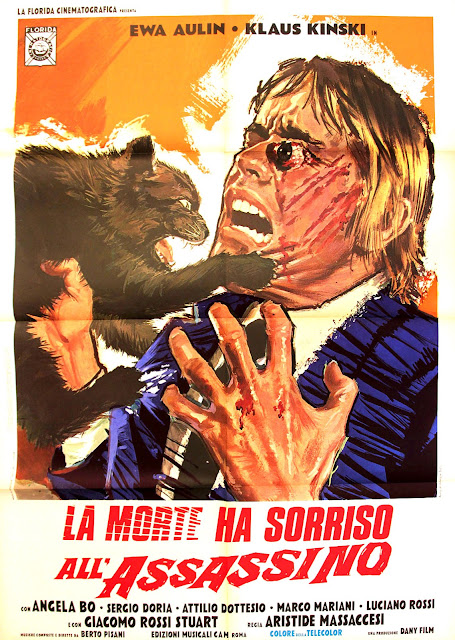 ‘Death Smiles on a Murderer’ [a direct translation of the domestic release title, ‘La Morte Ha Sorriso All'Assassino’] is a 1973 Italian horror film so narcotic in its effect that I have now watched it three times – and read the booklet, and listened to the audio commentary – and I still have no idea what happens in it.

I don’t mean that in the sense of, “I don’t understand the plot” (that’s only to be expected), I mean - I actually remember very little about the nature and order of the events which are portrayed on screen.

Quite an achievement for gifted cinematographer Aristide Massaccesi, here making the first and only proper feature film he would direct under his birth name before taking on the better known (nay notorious) alias of Joe D’Amato.

Further suffocating my rational senses meanwhile is Berto Pisano’s exquisitely languorous, melancholic main theme, which plays more or less constantly throughout, and which sounds like the accompaniment to a ballerina suffering from tuberculosis expiring during her final dance and witnessing the dust of her bones reforming itself into the shape of a gliding, celestial swan.

Though occasionally interspersed with the obligatory searing fuzz guitar stings and hideously jaunty ballroom dancing music, this remarkable melody tunnels its way into the viewer’s brain across the course of the film like a flower-bearing, funereally-garbed earwig, and indeed, the double LP soundtrack release which was recently issued alongside Arrow’s blu-ray upgrade of the film contains about 156 variations on it, all equally wonderful.

Trying to piece anything together beyond that feels like dipping into some deep and unsavoury region of the unconscious mind, but if I recall correctly, things might get underway with ubiquitous blond-mopped wild man Luciano Rossi, who is even more wild than usual here, playing a character who I think is the unhinged brother of a woman who may or may not have been murdered by the residents of the palacio, so he is running around like a madman and suchlike.

Then I think we switch to a flashback, or flashforward, or something, bringing us to a bit of business cribbed from LeFanu’s ‘Carmilla’ (or perhaps indirectly from Hammer’s ‘The Vampire Lovers’), in which a young blond girl in a black and red cloak (Ewa Aulin) is rescued from a coach accident, and invited into the nearby palace to recover.

Disconcertingly, Klaus Kinski plays the doctor overseeing her recovery, and, when no one is looking, he pulls out a big needle and sticks it directly into her eyeball (I certainly remember that bit). Kinski, it soon transpires, is actually a Frankensteinian mad scientist, and before long he’s down in the basement, mixin’ up the medicine, in the finest tradition of such characters.

There is some kind of sub-plot about an ancient Inca medallion(!?), which Ewa seems to have brought with her, and which Kinski declares contains the secrets of life and death within it, or something. So, he goes to work trying to reanimate a subject on his operating table, but sadly he doesn’t get very far with this, as he is promptly killed – possibly by Rossi, or possibly by his creature… or perhaps Rossi IS his creature, I really don’t remember – but either way, this regrettably spells the end of both the mad science plotline and the thing with the medallion, which I don’t think is ever mentioned again. Au revoir Klaus!

Meanwhile, we spend loads of time with the rich occupants of the palace, characters who feel so ephemeral that I’m still not really sure who they are. Are the man and woman husband and wife, or brother and sister? And, does it even MATTER in a movie like this? Inevitably, the man (Segio Doria) gradually falls in love with Aulin’s character, who, vaguely following the ‘Carmilla’ blueprint, also seduces the woman (Angela Bo) too. I mean, you’d think I’d remember THAT scene at least, but no dice.

I think Aulin is probably a ghost who is seducing these folks in order to take revenge upon them after they murdered her in an earlier time period, but I’m not entirely sure about that. There is also some stuff with a maid, who is being haunted and/or menaced by Rossi, who is possibly also a ghost, or just a bad memory?

At one point, Giacomo Rossi Stuart (whom you’ll recall as the male lead in ‘Kill Baby Kill!’, alongside a wealth of other Italian genre credits) turns up, playing Doria’s brother or father or something, but as their characters look fairly similar and neither of them have any actual personality traits, it kind of just seems as if the ‘man’ character has split in two.

At another point, the maid character flees the palace in terror, and gets her face blasted off with a shotgun, in full on blood-drenched papier-mâché Eastman colour glory. Again, I remember that bit!

Then there’s some stuff with Ewa getting bricked up behind a wall, Poe-style, a lot of torch-lit running around in the catacombs, and, towards the end, Rossi gets his eyeballs torn out by an enraged cat (a scene memorably depicted on the film’s visceral Italian poster design).

And there my friends, my recollection ends.

Describing a film as a “mood piece” usually implies that it will slow and stately, but ‘Death Smiles..’ is quite the opposite – indeed, Massaccesi’s directorial approach here is fairly deranged, cutting relentlessly between exhausting close-ups of over-wrought, rose-cheeked faces expressing mad emotions we’ve either forgotten the significance of or never understood in the first place, and throwing in every kind of disorientating photographic effect he can think of along the way, as if convinced that he was still essentially a cameraman, treating the film as a head-spinning show-reel to try to impress potential employers.

Perhaps ‘Death Smiles..’ does actually anticipate later Joe D’Amato horror films to a certain extent, in the sense that it intersperses long, languid passages of nothing-in-particular with startling moments of grotesque, rub-yr-nose-in-it gore, and also in the way in which the whole feels imbued with an inexplicable aura of diseased wrong-ness, but from my own POV, I certainly found this one much livelier and more watchable than the likes of ‘Anthropophagous’ (1980) and ‘Absurd’ (1981).

Though much of what transpires within it may be pretty mystifying, it’s too loud and visually restless for even its most meandering moments to be written off as “filler”, unlike D’Amato’s later films, in which he often seemed to be killing time waiting for the next outrageous incident to occur. By contrast, it feels as if he is always trying to put SOMETHING worthwhile on the screen here, even if the question of what exactly that ‘something’ was supposed to be often hovers unanswered like a bluebottle above a sugar bowl.

But nonetheless, I seem to keep watching it, so I suppose I must enjoy it? I’m sure I’ll find cause to watch it again too, trying again to penetrate its secrets. And each time, I know I’ll feel more and more like William Hurt in ‘Altered States’, descending into his isolation tank to plumb the primordial depths of consciousness… who knows, maybe I’ll eventually turn into Luciano Rossi and go on a rampage in the zoo or something? Watch this space. 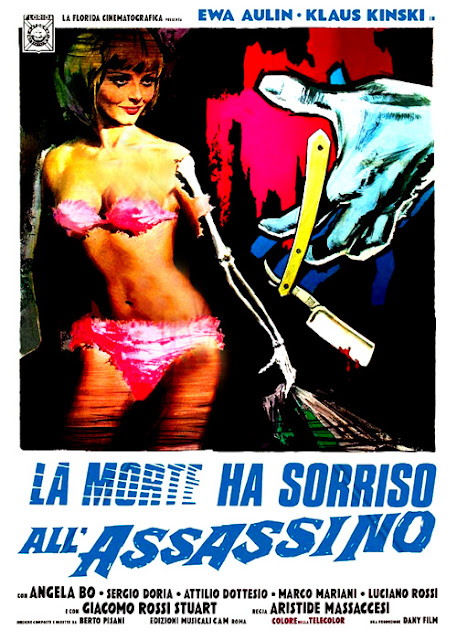 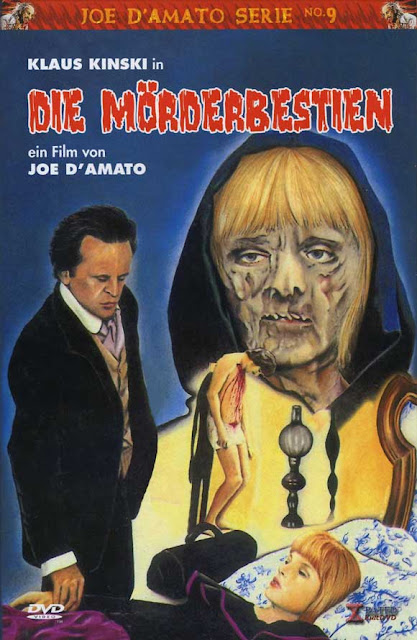 Highly entertaining review, and, yes, I want to see the movie now, though I don't know if that was your intention!

Thanks so much Douglas, and don't worry, it is *definitely* my intention to encourage people to sample the strange, mind-altering brew of movies like this one! That feeling of shaking yourself out of a dazed stupor after 80 minutes and thinking, "well, I'm not sure what just happened, but I think I liked it" is always something to savour.