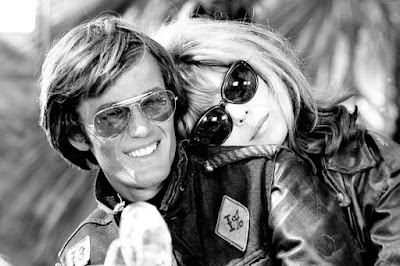 As you might imagine, I was very sad to hear of the death of Peter Fonda this weekend.

Whilst many of the mainstream obits will likely begin and end with ‘Easy Rider’, those of us with a more, uh, diverse taste in cinema will remember Fonda fondly for the myriad of other off-beat roles he essayed through the ‘60s and ‘70s, in the course of establishing himself as what I can only describe as the pre-eminent leading man of the exploitation / counter-culture wing of the New Hollywood.

Whether playing asshole anti-heroes in ‘The Wild Angels’ and ‘Dirty Mary, Crazy Larry’, freakin’ out in ‘The Trip’, popping up as an incestuous ghost(!) in Roger Vadim’s segment of ‘Spirts of the Dead’, kicking Satanic ass with his buddy Warren Oates in Race With The Devil, or radiating affectless calm as he upsets the lives of Oates and Harry Dean Stanton in Thomas McGuane’s oddball Florida fishing black comedy ‘92 in the Shade’, Fonda has always been an actor whose performances I’ve enjoyed, and for whom I’ve always felt a great deal of warmth, irrespective of the sense of stubborn, egotistical antagonism which often seems to bleed through into his on-screen persona.

Just as important however is the fact that the two films Fonda directed in the early 1970s – the elegiac, character-driven western ‘The Hired Hand’ (which I reviewed many years ago here) and the independently-produced sci-fi oddity ‘Idaho Transfer’ (which made my best first watches list last year) – are both excellent. Far removed from anything his “Hollywood bad boy” reputation may have led the world to expect, these films are both thoughtful, humane and challenging works which stand alone within their respective genres.

If Fonda had had the inclination and resources to further his career as a director, I have little doubt that the world wouldn’t have merely been mourning the guy from ‘Easy Rider’ this weekend, but an important and distinctive voice in American cinema.

Hearing him talk about his experiences behind the camera in contemporary interviews, I’d imagine it must have simply been his frustration with the machinations of the movie-making “system” – and, no doubt, his films’ notable failure to reap commercial rewards – which led him to direct his energies elsewhere; into family, environmental activism and community work, publically lambasting both Republican and Democratic presidents in typically forthright fashion – and of course a steady stream of acting gigs that kept him busy right up until the end.

In the statements released by his family following his death, I was touched by his sister Jane’s assertion that “he went out laughing,” and by their collective request; “In honour of Peter, please raise a glass to freedom.”

Consider it done, with Bruce Langhorne’s sublime soundtrack to ‘The Hired Hand’ as accompaniment.