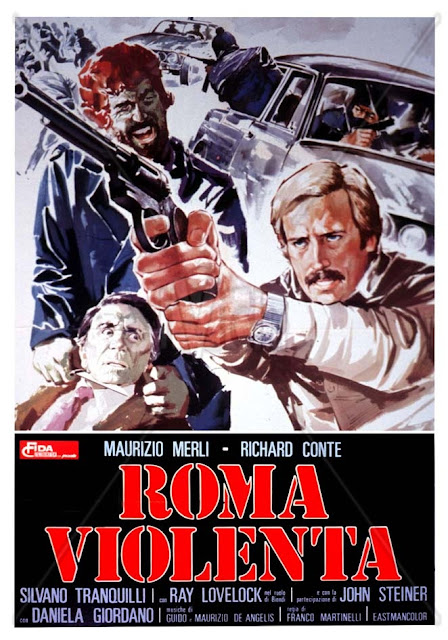 Released in the USA under the name ‘Violent City’ (but definitely not to be confused with the 1970 Sergio Sollima / Charles Bronson joint of the same name), ‘Roma Violenta’ (no translation needed, I’m assuming) represents the Italian poliziotteschi at its most reactionary and utilitarian, boiling the right wing fantasies of ‘Dirty Harry’ and ‘Death Wish’ down to a sticky, unpalatable paste, and serving it up with a skimpy garnish of cut price action and lurid sadism.

The film is historically significant however for introducing the world to Euro-Crime icon Maurizio Merli, and to his signature character Commissario Betti – an expressionless, blonde moustached human torpedo on a one-man mission to crack the skull and/or puncture the lungs of every small-time hood who dares set foot in one of Italy’s major metropolitan areas.

Generally assumed to have been cast as a result of his passing resemblance to Franco Nero, who had recently had recently scored big at the box office playing crusading cops in Enzo Castellari’s ‘High Crime’ (1973) and ‘Street Law’ (’74), Merli’s dead-eyed, suspect-pulverizing persona must have proved popular with audiences, as he went on to reprise the Betti character in both Umberto Lenzi’s ‘Napoli Violenta’ and Girolami’s ‘Italia a Mano Armata’ [export title ‘Special Cop in Action’] the following year, before essaying a series of similarly two-fisted Inspectors and Commissarios in films for Lenzi, Stelvio Massi and other directors throughout the late ‘70s.

An entirely generic distillation of everything you might expect of one of these movies, ‘Roma Violenta’ begins the only way it could, with a bunch of gun-toting, stocking-masked punks hi-jacking a city bus and stealing valuables from the passengers. Of course, it all goes wrong, and of course an innocent bystander (a seventeen year old boy – guaranteed to elicit maximum hand-wringing from proponents of the poliziotteschi’s none-more-macho mindset) is callously gunned down. A promising life, senselessly wasted! Is Commissario Betti going to stand for this? Hell no!

In between blustering through the offices of his uncaring, desk-jockey superiors, angrily demanding more men and more money for his ‘special squad’ to combat this intolerable crime wave, Merli is soon on the trail of the bus robbery’s perpetrators, thus treating us to an explanatory demonstration of his no nonsense approach to police-work.

This basically consists of Betti meeting with his top undercover man Biondi (played an impossibly youthful-looking Ray Lovelock), who tells him, “it was that guy over there”, prompting our hero to trap said guy in an empty bus (irony, ‘Roma Violenta’ style) and beat the living shit out of him (information gathering, ‘Roma Violenta’ style).

Already, the film’s political stance has been taken to such a comical extreme that for a moment I almost suspected it had crossed the line into a Judge Dredd style parody of fascistic law enforcement. Certainly, as Merli beats this unarmed youth to verge of death whilst demanding he “confess”, it is difficult for our sympathies to remain fully on the right side of the law… but then, I’m bleeding heart, liberal do-gooder, so what the hell do I know? 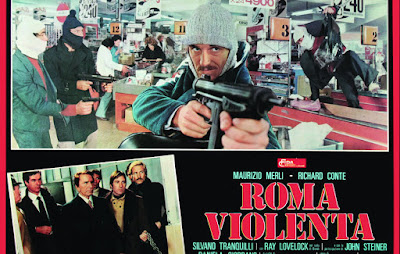 Perhaps in order to off-set this potential drift of audience sympathy, ‘Roma Violenta’ is notable for its failure (or refusal?) to in any way engage with the lives and activities of its criminal antagonists. Surprisingly, there is no suggestion at any point in the film that the teen hoods and low rent villains Betti combats are connected to an organised crime network or criminal syndicate, and, disappointingly, there are no cigar-chewing, Lionel Stander Mafiosi, twisted, Tomas Milian-style psychopaths or calculating John Saxon overseers to liven things up either.

Though some solid performers (John Steiner and the ubiquitous Luciano Rossi, for example) are on hand to play the more experienced crooks, none of them are ever given the chance to develop much of a personality, and for the most part the film’s baddies remain nameless, gun-toting young hooligans, whose criminal ambitions are limited to opportunistic hit-and-run attacks and the occasional, poorly planned armed robbery. All of which rather makes a mockery of Belli’s repeated insistence that he needs greater resources and special legal dispensation to fight this existential threat to law & order, needless to say.

Under such circumstances, even the most brutal of crime films would normally at least pay lip service to the social inequalities that might lead young people to embark on such crime sprees, but no dice here. In classic Michael Winner tradition, these punks come out of nowhere like goblins, depriving the well-to-do of their gold watches and man-handling their women, before scampering off again, leaving blood and bodies in their wake.

Having noted during the opening credits that the great Richard Conte appears in ‘Roma Violenta’, I could barely wait to see him pop up as a suave, sadistic mob boss (a stereotype he’d gleefully perfected over the years in everything from ‘The Big Combo’ (1955) to Fernando Di Leo’s ‘Il Boss’ (1973)), but again, the film defies our expectations by casting Conte as a good guy - namely, one “Mr Sartori”, a campaigning lawyer who invites Betti to join his freelance vigilante justice group after our man (inevitably) quits the police force in disgust.

Now, in any other crime movie, when a venerable Italian-American character actor invites our protagonist to shake hands with a group of men who are lined up in what appears to be a meat locker, and distributes glossy photos of some people he wishes them to track down and hospitalise… well, we might reasonably expect our hero to contemplate the possibility that his strict moral code has been somewhat compromised. But, as we have established, ‘Roma Violenta’ is a movie of very little brain, and Mr Sartori’s earnest dedication to the pursuit of justice is never questioned.

Instead, he very nearly finds himself becoming one of the film’s several vengeance-justifying sacrificial victims, when a gang of particularly scruffy-looking villains invade his home and hold him at knife-point. It is at this point that Mr Sartori’s previously unmentioned daughter descends the stairs, and the uncredited actress playing her gets to enjoy a full three seconds of screen time before – you guessed it – she is stripped naked and raped by the thugs.

A drearily nasty business, replete with cynically opportunistic frontal nudity, this sequence gains a touch of class from Conte’s appalled reaction shots; a real pro, even when working in such reduced circumstances, he sells his character’s wide-eyed horror very well. 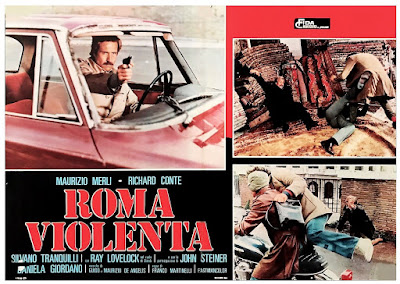 Predictably, this treatment is about par for the course for female characters in ‘Roma Violenta’. There are a few brief scenes in which Merli goes to visit his girlfriend (played by Euro-cult regular Daniela Giordano), who appears to manage a hotel, but this has no connection with anything else that happens in the film, and basically feel as if it has been tacked on solely in order to establish that Betti is in a monogamous relationship with a woman - lest the audience suspect that he might actually be some kind of weirdo, vis-a-vis his “lone wolf” lifestyle and apparent enthusiasm for inflicting sadistic beatings upon younger men.

Nameless Girlfriend aside however, I’m not sure there is a single woman this movie who gets to speak more than a single line of dialogue before being arbitrarily murdered or assaulted…. which I’ll admit puts me in a bit of a critical quandary. After all, if I’m to continue to defend Sam Peckinpah’s ‘The Wild Bunch’ or Kinji Fukasaku’s yakuza films against accusations of misogyny, citing the argument that they are merely portraying (rather than endorsing) a hyper-masculine world in which women are forcibly denied a voice, surely I should do ‘Roma Violenta’ the same courtesy...?

As much as I hate to recognise distinctions between ‘high’ and ‘low’ cinematic culture though, at some point I suppose you’ve just got to draw a line in the sand and – in this case - declare that Peckinpah and Fukasaku made critically-engaged, emotionally-nuanced films which can (at a stretch) be read as implicit critiques of the kind of toxic machismo they specialised in portraying. Marino Girolami on the other hand…

Well -- I don’t know. For all that I’ve torn it apart above, I don’t want to come down too hard on ‘Roma Violenta’. As egregious and simple-minded as its content may sound in the abstract, the actual execution here is so pulpy and paper-thin that it is impossible to really take offense.

As with his other Euro-Cult calling card (1981’s hugely entertaining Zombi Holocaust), Girolami essentially directs here as if he were pasting together a cheap fumetti comic book, banging through scenes in a rough, first-take-best-take manner that, whilst it rarely crosses the line into actual incompetence, suggests an attempt to wring maximum impact from a bare minimum of effort.

Wasting no time on such niceties as character, narrative depth or visual interest, Girolami comes down hard on the pacing, producing a movie that – whilst it scarcely contains a single line of dialogue that doesn’t feel like a perfunctory reiteration of genre cliché – is rarely dull, remaining eminently watchable, and indeed rather likeable, in an “after a few beers” kind of way.

The film’s overall highlights are probably the moments in which robberies and assaults are staged on crowded city streets, complete with gawping by-standers and barely choreographed chaos, including a hilarious skit in which some purse-snatchers get their asses kicked by an undercover police karate expert, made up in drag as an old lady.

Merli’s numerous beat downs meanwhile are creditably staged, complete with quick edits and bone-crunching sound effects that could have come straight from a slightly sluggish kung fu movie, and, though comically under-cranked, the obligatory car chase also packs a punch, hitting all the necessary poliziotteschi pleasure points, as a bunch of those tiny ‘70s Italian cars we all love so much roar precariously around an unfinished motorway flyover, allowing Girolami to make the most of his minimal resources, cannily switching back and forth between overhead shots and ‘bumper-cam’ for a touch of proto-‘Mad Max’ excitement.

By far the best thing ‘Roma Violenta’ has going for it though is the music, which comes courtesy of producer Guido de Angelis, working as usual in collaboration with his brother Maurizio. And, the de Angelis boys are really on top form here too, working out a kind of propulsive, disco-influenced progressive rock sound with a strong melancholy undertone provided by some poignant lead playing on keyboard, flute and harmonica. As exemplified by compilation staple New Special Squad, it’s a stone-cold classic of ‘70s cop movie music, and comes highly recommended.

And…. that’s about all I have to say about ‘Roma Violenta’, to honest. It may not be one of the better poliziotteschi pictures, but, if you can turn off your brain (and your conscience), stop asking questions, and simply revel in the surfeit of ‘70s Cop Vibes it provides (mm, all that fuzzy, nicotine-stained brown), it’s a pleasantly psychotic timewaster.

I do wonder what Girolami thought about the fact that, whilst he was treading water on stuff like this, his own son (the aforementioned Enzo G. Castellari) was busy outclassing him with a series of vastly more accomplished additions to the genre, hitting his peak the following year with one of my all-time favourite European action/crime films, ‘The Big Racket’, but…. that’s another story, I suppose. For now, let’s knock this one on the head and hopefully we’ll get around to it one day. 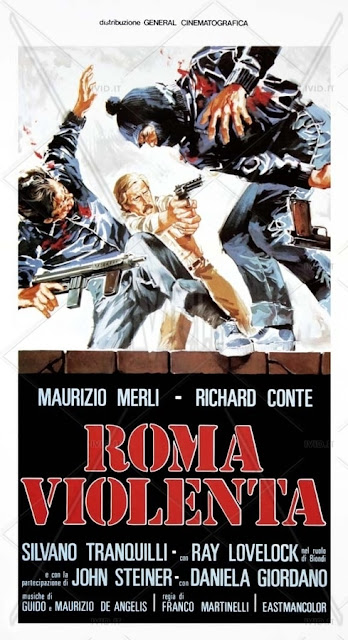 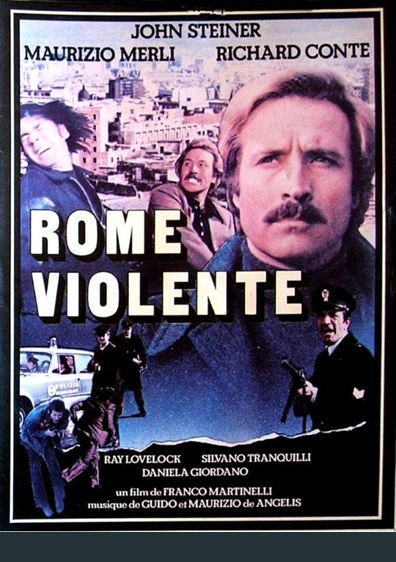