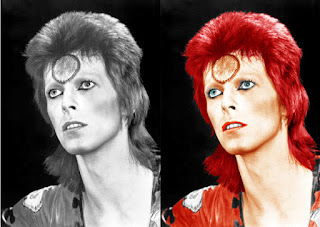 That’s a ‘Double Bowie’ on the street, I believe? If not, it should be.

No big celebrations or anything, but just a quiet little meta-post to commemorate the fact that I made the first post on this blog ten years ago today.

In personal terms, a lot has changed since then (which is probably just as well). From a roaming, youthful singleton in February 2009, by February 2019 I’ve become a husband, property owner, pet owner, and, I hope, a more responsible, grown up person in all manner of tedious ways that I need not delineate here.

Thankfully however, my taste in literature and cinema remains far from grown-up, and my enthusiasm for writing stuff and cataloguing my discoveries here remains undiminished, even if the way I go about it has probably changed somewhat over the years.

When I first got started, horror films, pulp paperbacks and related culture were still very much a tertiary interest for me, and I often used to write about them from the point of view of a bemused outsider – deliberately avoiding any background research or fact-checking, and just recording my responses to the artefact before me in a “hey, what is this crazy thing I’ve found?” sort of manner, blissfully unaware of the fact that, in many cases, numerous writers and fans had already exhaustively addressed that question in the decades before I got around to it.

This approach undoubtedly has its appeal, and some bloggers I admire have gone far with it, but in my case it got old pretty quick, and led to a handful of rather snarky reviews whose ill-informed content I now feel somewhat embarrassed about (though, in the name of full transparency, you can still find them lurking around in the archives here).

For better or for worse, it was this early stage of BITR’s existence that proved by far the most successful in terms of viewing figures. I had the good fortune to be picked out early for Blogger’s “blogs of note” feed, which was apparently a big deal back in 2009/10-ish, instantly leading to a massive spike in visitor numbers. Few of these visitors stuck around of course, but at least it served to ‘put me on the map’, so to speak. Subsequently, naughty teenagers typing things into Google during the ‘Twilight’ era led to my review of Jean Rollin’s The Nude Vampire stacking up over a quarter of a million page views(!), whilst a coterie of Australian ‘bikies’ started an impromptu keg party over at my review of the exceptional antipodean biker movie Stone, putting it in a respectable second place. (They’re welcome back any time.)

Things continued apace until September 2014, when some delightful person decided to hit Blogger’s “report inappropriate content” button, resulting in the imposition of the warning screen that you’ve no doubt had to click through to reach this page. On reflection of course, this ingenious means of protecting vulnerable minds from exposure to damaging material seems entirely appropriate, given that any child too simple-minded to figure out how to click the “yes I wish to proceed” button probably would be upset by the kind of PG-13 level content I generally tend to post here.

Nonetheless though, the immediate effect of this change can be easily gauged by looking at the graph below, taken today from Blogger’s Stats tab, and covering this blog's entire history to date: 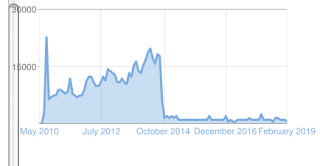 I considered the idea of moving the whole shebang over the Wordpress or something, but, let’s just say that I had a lot of rather more serious issues to deal with in the second half of 2014, and time simply didn’t allow for anything other than ploughing on regardless. Besides which, I’ve never really given much of a hoot about the overall popularity of any of my creative or critical endeavours – so long as I enjoy them and they give something back to at least someone, I’m always happy to proceed.

As such, the consistently enthusiastic and good-natured comments and emails I’ve continued to receive from readers over the years have been extremely encouraging, helping to reassure me that most of numbers lost in that big fall in page views probably just consisted of Russian bots and random search engine hits, leaving the central core of genuine, human visitors and regular readers untouched. Which is great, actually.

Meanwhile, as my appreciation and knowledge of quote-unquote ‘cult cinema’ and pulp fiction has grown over the years, the pendulum has tended to swing in entirely the opposite direction with regards to my writing, as I’ve become increasingly interested in fully unpacking the cultural context and production histories of the films I review here – sometimes at frankly eye-watering length (the Lovecraft on Film thread, or my recent deconstruction of the reconstructed Lady Frankenstein, are probably good examples).

Though these vast exegeses will continue to have a place here from time to time, I’ve recently decided to start trying to push back a bit on the word counts and grand schemes; writing more concise pieces on a wider variety of movies for my end of year posts has proven to be loads of fun, even if the necessity of producing loads of them in one go proved pretty exhausting.

As such, I’m going to try to this year to get back to basics, attempting to write sub-1,500 word reviews of whichever films/books I’ve seen/read recently and feel like writing about, beginning as many new connecting threads as are needed to cover them, and seeing which ones develop further and which ones die naturally. In between those, meanwhile, I’ll plan to do a bit of work here and there on longer, more developed posts (such as continuing the long neglected Lovecraft thing) and will aim to get them finished as and when, with no particular deadline.

But, that’s probably more than enough State of the Weblog Address / thinking out loud for the present. Thanks once again to everyone who is reading this for reading it. Ten more years? Barring global catastrophe or total internet meltdown (increasingly concerning possibilities, admittedly), I don't see why not.
Posted by Ben at 18:04

Ten years, eh? Many congratulations! It genuinely is a great blog and one I return to a lot (my kinda shit, you see)

That graph is pretty shocking in how it displays the level of drop off! I think I found this place just prior that time, although I never commented much on blogs back then

Congratulations indeed Ben, ten years is a genuine milestone, especially when so many blogs fall by the wayside - the blogosphere highway is littered with the remains of so many abandoned blogs left to rot in the midday sun, so well done for keeping your site up and running. I have the feeling that the golden age of blogging is over, which may account for the general drop off in traffic these days, I know my own numbers are absolutely dismal despite me putting time and effort into my posts - not so easy when you have a 3 year old vying for attention. But I’m very happpy to have found your terrific blog - better late than never, but happily I do have a huge archive to explore. The content is eclectic, the writing is superb, and the blog looks great to read - something that shouldn’t be taken for granted - the absence of paid-ad pollution is much appreciated. Consider me a dedicated follower.

Thank you both so much for your kind words - I really appreciate it.

I've been intermittently enjoying your blog for a long time too Wes, which reminds me, I really should add it to my link list on the right hand side, I'm not sure why I've not done so previously.

Sadly you're right, the 'golden age' of weblogging has long passed. In fairness, I think a lot of people are now expressing themselves via podcasts or youtube channels instead, but those often aren't a huge amount of use to me when I'm sitting in the office at work looking for something to covertly read in between phone calls, or at home listening to records etc. Plus, pre-internet, my view of the world was more of less shaped by various (now largely defunct) magazines, fanzines and music papers, so... I just like reading stuff, basically.

Thankfully there are still a hardcore of people in most subject areas who have stuck to the weblog format and who do it really well, so I don't think it will die anytime soon... perhaps it could even be due for a revival as good journalistic/critical writing becomes ever harder to find in traditional print media, and social media becomes ever more hazardous to navigate...? But who knows.

Congratulations, Ben. I don't make many comments, having a shaky command of english) but I'm a faithful reader.

Thanks for your kind words C. Rancio, they are much appreciated. Oh, and no worries at all about language skills - many of my best friends in the whole world speak English as a second language (or not at all), so no snobbishness here. : )