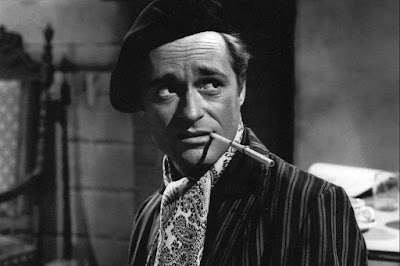 Very sad news today, as I learned (via Tim Lucas’s blog) that the great Dick Miller has passed away, mere weeks after celebrating his 90th birthday.

In keeping with the majority of Miller’s screen appearances, I’ll try to keep this brief, and won’t patronise readers by presuming that they don’t know who Dick Miller is.

Even if, for some reason, you don’t yet know his name, if you have watched a reasonable number of American films, you will inevitably be able to identify him using the holy, ceremonial title of oh, THAT guy (an attainment acknowledged by the title of this 2014 documentary about his career, which I would love to see, incidentally).

Personally however, I’ve never known him as oh, THAT guy, because I was fortunate enough to see him playing the unforgettable role of the wouldbe beatnik sculptor / loveable simpleton Walter Paisley in Roger Corman’s wonderful ‘A Bucket of Blood’ (1959) fairly early in my movie-watching career. Ever since then, I have been fully aware of the fact that he is Dick Miller, and that he is awesome.

(If I tell you of the quizzical looks I’ve received over the years, each time I’ve found myself compelled to suddenly yell “DICK MILLER!” whilst watching some movie or other in company, I’m sure many cult movie buffs will be able to relate.)

Given the strength of Miller’s performance in ‘A Bucket of Blood’, I’ve often wondered why he never really moved into playing lead roles. Part of the explanation I suppose is simply that Hollywood – even in its most marginal, low budget off-shoots – rarely makes movies with Dick Miller type people in the lead roles. I mean, I’m sure he could have absolutely nailed it as some off-beat, ‘Kolchak: The Night Stalker’ type hero or something, but for whatever reason, it never happened.

More likely though, I’d tend to suspect that Miller’s decision to specialise in cameos and one-scene-wonder character parts was simply due to a general recognition that – please forgive me for this one – a little Dick goes a long way.

By way of further explanation, I think I’ll need at this point to revert to the aforementioned Mr Lucas, whose memorial post (linked above) sums things up perfectly*:

“He made bad movies fun, good movies better, and great movies... great movies with Dick Miller in them! Simply put, he was somebody we were always happy to see.”

R.I.P., and our condolences to the great man’s nearest and dearest. A sad day.

* I also stole the photo above from Lucas’s blog, because it’s unbeatable – I hope he doesn’t mind.

A very nice tribute Ben... My first encounter with Dick Miller was most likely was The Terminator, and it's a testimony to his skill as a bit player that he could submerge himself into a role - I don't necessarily watch his turn as the gun shop owner and think "Ah the great Dick Miller!", but rather I'm absorbed in the tension of that scene. I imagine he had a terrific life as a jobbing actor.

The great Dick Miller. “Just what you see, pal”