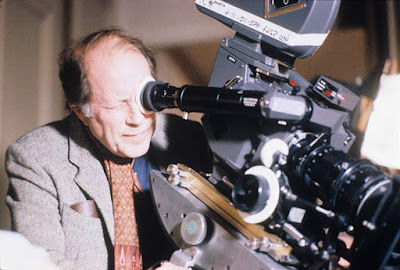 At the present moment, I’m not sure have a lot to say about Nicolas Roeg that can’t be easily gleaned from the numerous, no doubt heart-felt, obits that are circulating online and in print, but nonetheless, it wouldn’t be right to let his passing go un-noted here.

Back in the non-linear, flashback past however, my younger self probably had quite a lot to say about him. Having grown up at around the time Roeg’s cult/critical reputation was really starting to glow, ‘Walkabout’, ‘Don’t Look Now’, ‘The Man Who Fell To Earth’, and, once I scored a copy, ‘Performance’ were all regular fixtures back in the late VHS era, just as they must have been for many others, screened in student bedrooms or on commandeered parental TVs, held up as peerless exemplars of “intelligent”, “risk-taking” cinema, smuggling full-on, perception-warping weirdness into ostensibly popular narrative modes.

Roeg’s famously fragmented editing and eye for powerful imagery always seemed to add a frisson of occult conjuration to proceedings back in the day, as we stared at distant, square screens, doggedly trying to follow the flow of the washed out, tape-fuzzed presentations that, in retrospect, must have made these grandly photographed, visually nuanced ventures seem almost incomprehensible.

Indeed, for his achievements as a cinematographer alone, Roeg could be considered a legend. Who else can you imagine helping to define the aesthetic of movies as diverse as ‘Lawrence of Arabia’, ‘The Servant’ and ‘The Masque of the Red Death’..? More-so than many other household name directors in fact, it strikes me that it was his sheer technical prowess that played a significant role in establishing the cult that has grown around him.

Whereas his never-quite-as-widely-acclaimed contemporaries in what I suppose you might call the more fantastique / out-there wing of post-1960 British cinema (Russell, Boorman, Anderson, and indeed Donald Cammell) have all been defined by the strength of their personalities, leaving their personal obsessions clearly stamped on just about everything they shot, Roeg by contrast was a more subtle, more low key brand of auteur, his vision defined more through form and technique than repeated imagery or subject matter.

Unlike the aforementioned directors, I have very little idea what kind of person Nicolas Roeg was, or of what he believed in. His work, on the surface at least, gives us few clues. At the risk of drifting into pretention, his films feel like exercises in letting cinema speak to itself, rather than of a filmmaker speaking down to his/her audience from on-high.

As such, they are exploratory (rather than didactic) works, in which on-screen characters have an independent life of their own, impossible to reduce to mere symbols or archetypes, even as the jarring, discontinuous editing similtaneously draws our attention to the artifice of the medium.

Having ‘done’ the greatest hits of all of the filmmakers referenced above at an early age, revisiting and reappraising their work has been on my long list of ‘things to do’ for some time. In Roeg’s case, the process has already begun, in that last month I watched ‘Don’t Look Now’ for the first time in years, and appreciated it more than ever.

Rather than all the clever-clever stuff about fragmented timelines and premonitions that used to fixate me as a teenager/student, I can now follow the film more as the purely emotional narrative that Roeg presumably intended, seeing how instinctively his outré technique serves to enhance the rather more prosaic, but no less horrifying, story Sutherland and Christie are telling through their remarkable performances.

(Having become an aficionado of giallo cinema since my last viewing, I also enjoyed exploring the strange notion that Donald and Julie’s story seems to be taking place in parallel with some sort of Umberto Lenzi movie about a killer dwarf, in which they appear as mere cannon fodder/supporting characters.)

The film still has that intangible air of magic(k) about it, that Kenneth Anger-esque sense of the editor’s scissors casting some dark spell, placing a curse as tangible as anything in M.R. James upon the characters (and, consequently, upon the audience)… but now perhaps, I’m old and boring enough to understand that that is not really the point.

I can only hope that revisiting Roeg’s other key works over the next few years might prove similarly rewarding, and rest assured, I also have both ‘Bad Timing’ and ‘Eureka’ sitting unwatched on the shelf, awaiting some quiet evening when I’ve got both the time and energy required to take on such (presumably fairly challenging) viewing experiences.

Perhaps at that point, I’ll have something a bit more insightful to say about Mr. Roeg, but for now, I’m simply happy just to have turned in what I’m fairly certain must be the only obituary to have name-checked Umberto Lenzi.

I loved Roeg when younger - mainly because of accidentally seeing Performance on Channel 5 one night in about 97, after my video overran from recording Confessions of Window Cleaner and caught Performance too (whilst also forever entrapping me in a highbrow/lowbrow taste conundrum), then hoovered up the greatest hits in short order whilst wondering quite how The Witches fits into a CV of cut-up cinema.

Really though, the one that left most of an impression on me and the one I saw about 6-7 years later, so wasn't part of the initial viewings, was Bad Timing. Now thats a cold, somewhat disturbing film, and grossed me out at the time......but its the one I find time for if I'm going to watch a Roeg.

There was a very good documentary about him on telly a number of years back, the name of which I can't recall. Was a BBC1 Imagine job.

'Confessions of a Window Cleaner' and 'Performance' sounds like a great accidental double-bill!

Both very different British reactions to the sexual revolution, I suppose...!? Well, both feature long-haired chancers running around in the buff in grotty semi-detched properties, anyway...

I'm very much looking forward to watching 'Bad Timing', when the time is right (no pun intended).

Thinking back, that evenings films followed Performance with Karloffs “The Man They Could Not Hang”, which the video also caught. What a solid Friday evening of scheduling that was - I’d lay good money for a channel to do that nowadays!

Performance is a masterpiece and Don't Look Now is an excellent blend of drama and giallo. I missed all of Roeg's later films after The Witches, a film I forgot about right after leaving the theater. Bad Timing was compelling and bizarre enough without Harvey Keitel's off-kilter accent and odd mannerisms.