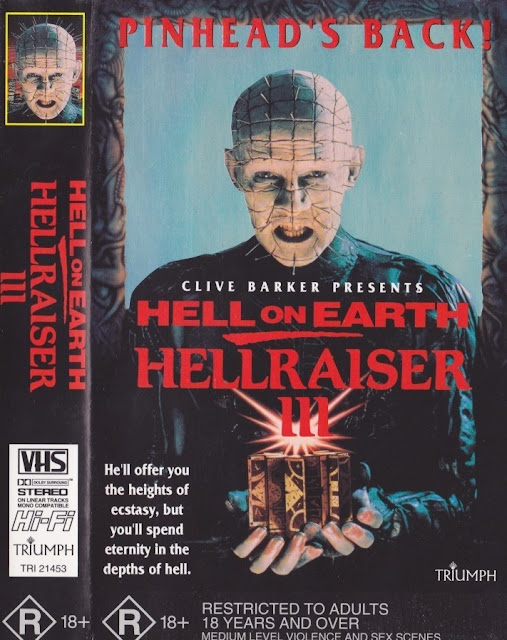 Say what you like about this much despised second sequel to Clive Barker’s ‘Hellraiser’, but at least it’s consistent. Whereas the more highly regarded ‘Hellbound: Hellraiser II’ sent us on a vertiginous rollercoaster ride of expectation and disappointment, aiming for a tone of serious, proper horror business before crashing and burning in a heap of nonsense, part III by contrast is troubled by no such lofty aspirations.

Right from the opening crawl, Anthony Hickox’s film sets up its stall as a mildly diverting, VHS-era trash horror movie, and, when the credits roll a distributor-friendly ninety three minutes later, that is exactly what it has delivered.

(Hickox, for those who are unaware, is the son of Douglas Hickox of ‘Theatre of Blood’ / Sitting Target fame, and seems to have spent much of the late ‘80s and early ‘90s making medium budget horror films with colons in their titles.)

Of course, much of the fan-ire heaped upon ‘Hell On Earth’ was likely instigated not by the relative qualities of the work in-and-of-itself, but rather a result of the thoughtless and reductive liberties it takes with the pre-existing Hellraiser mythos. So horrendous in fact is the demolition job undertaken here upon the ideas and atmosphere established by the preceding films, it is easy to see why so many franchise followers have found this instalment impossible to tolerate.

With sad predictability, the Cenobite “family” are nowhere to be found here, and, if we’re ever offered an explanation as to how Doug Bradley’s Pinhead ended up encased in some sort of rectangular concrete sculpture offered up for sale in one of those “macabre” art galleries that only exist in horror movies…. well, I must have missed it.

Although there are a few confused attempts to crow-bar the film into series continuity, ‘Hell On Earth’ basically feels as if it must have originated as a premise for a stand-alone horror movie, and the general consensus seems to be that it would have received a far warmer reception if it had been allowed to reach audiences in that form. (Of course, without the Hellraiser brand name, it’s likely such a project would never have achieved the necessary financing or distribution, but hey – that’s showbiz.)

On the plus side however (opinions may vary), the scriptwriters here do at least seem to have latched onto the idea that Bradley had both the chops and fan popularity to make it as a kind of post-Vincent Price horror star, and as such they do at least give the concrete-encased Pinhead plenty of ridiculously fruity dialogue to chew on (“human dreams... such fertile ground for the seeds of torment..”).

Once the Pinhead block/cube/sculpture thing (“Pillar of Souls”, it says here) has been installed in the grotesquely adorned bed chamber of sleazoid “alternative” night club proprietor J.P. Monroe (Kevin Bernhardt), the movie essentially settles down into a sort of early ‘90s Hollywood goth riff on ‘Little Shoppe of Horrors’, as Monroe, entranced by Pinhead’s hyperbolic chat, reluctantly begins feeding the souls and flesh of his regular punk-ette conquests to the demonic sculpture, with agreeably messy results.

The tone here remains light and easy-going, streamlined for general audiences both by the near-complete removal of the networks of erotic transgression and emotional suffering that defined the first two Hellraiser films, and by the glossy Americanisation of the settings and characters. What it offers the viewer in return – eg, routine deployment of moderate gore, occasional softcore nudity and alarming musical interludes from late period hair metal band Armored Saint – is unlikely to constitute much of a deal for more serious-minded fans, but as I say, if you’re willing to take it on its own terms, it’s fairly good fun.

One of the things that helped make ‘Hell On Earth’ so oddly appealing to me was its characters, who, happily, are a fairly interesting bunch. Where the traditional ‘Little Shoppe..’ narrative presents a sympathetic figure forced to do the bidding of the immobile monster, Bernhardt’s character by contrast is an utterly despicable creation – a sort of pathetic, goth-a-billy Harvey Weinstein-in-training who lures troubled and impressionable girls to the grim bachelor pad he keeps above his night club, coercing them into (presumably fairly vanilla varieties of) sexual congress whilst all the time imagining himself as some kind of Sadean libertine. When Pinhead eventually makes mincemeat of him, it feels richly deserved.

On the other side of the fence meanwhile, Terry Farrell’s TV-reporter-in-search-of-a-scoop and her older ex-hippie cameraman (Ken Carpenter) make for likeable protagonists, particularly once Farrell gets mixed up with Terri (Paula Marshall), the damaged, scatter-brained punk girl who contacted her after narrowly escaping from a rendezvous with the Pinhead statue over at Monroe’s place.

I mean, it’s not David Mamet or anything, don’t get me wrong, but by the expected standards of a movie like this, the stuff with Terri wondering incredulously at the stability of Farrell’s professional life and tidy apartment, and the uneasy relationship between the two very different women, is conveyed very nicely, thereby putting ‘Hell On Earth’ comfortably over that crucial horror movie hurdle re: ensuring the characters are sufficiently believable and appealing that that we care about their fate when they are inevitably imperilled.

Sadly, it is with all that imperilment that the movie really begins to flounder, as ‘Hell On Earth’s last few reels veer off into the realms of absurdity in a manner that must have put the blood pressure of any self-respecting ‘Hellraiser’ fans who’d stuck it out this far through the roof. There are a few pretty effective moments during this conclusion – I’m thinking particularly of the mass slaughter in the nightclub – but for the most part the FX-heavy grand finale of the movie has dated extremely poorly.

So… let’s put it like this. In Barker’s ‘Hellraiser’, the Cenobites were fascinating and terrifying creations. Avatars of a tantalising, unseen world of extreme bodily sensation, we imagined them to be veterans of deathless centuries of amoral excess; the supernatural reincarnations of human beings who have gone so far into the realm of ecstatic self-destruction that they have long ago since ceased to be human.

In ‘Hellraiser II’, I felt that the stuff tying the Cenobites back to their original, relatively recent, human identities was both reductive and poorly handled, and by the time we get to part III, the Cenobites have apparently been reduced to the level of goofy, action figure-like automatons who stomp about the backlot streets in Frankenstein’s monster poses, throwing polystyrene breezeblocks at policemen.

Helpfully, these new style Cenobites can also be instantly created by taking some supporting characters and jamming the objects most closely associated with them into their faces. Thus, the aforementioned ex-hippie cameraman ends up firing rockets from the lens embedded in his eye socket (!), whilst – most memorably – the DJ from the nightclub witnesses a miraculous, digital vision of some CDs spinning around his head before being transformed by Pinhead-magic into a lethal CD firing Go-Bot.

In the face of such rampaging nonsense, what can you do but laugh? And you know what? I like laughing. It’s fun.

A few thrills and spills, some icky gore effects, a garish period aesthetic, a bit of human interest and some utter WTF bad ideas – what more could you ask of a post-midnight video rental timekiller?

Whether or not this modest result was worth pretty much murdering the credibility of what began as the most potent and inspired horror franchise of the 1980s is questionable, but never mind. As is so often in case in popular culture, we’ve got to make do with what we’ve got rather than playing with “what ifs”, and what we’ve got here scratches that “let’s have another beer and watch a horror movie” itch a lot more satisfactorily than its miserable reputation would suggest.

Also: Motörhead did a song called ‘Hellraiser’ for this movie. It plays over the end credits. This pleases me, and makes me think kindly of the film I’ve just watched. Job well done, cross-promotion marketing guys. 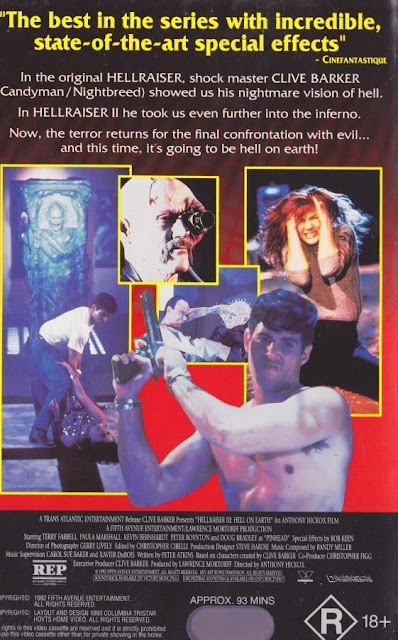 You know, I agree completely with you on H3. It does more or less exactly what it sets out to do, it’s someone who’s picked up the franchise and made a perfectly fine VHS/Tuesday night 11.30 BBC1 horror film.

I think if Hellraiser as a three part film series really. First ones great, second one falls into the “we gotta one up it!” trap, third one is kinda dislocated from the other two but enjoyable enough in its own right.