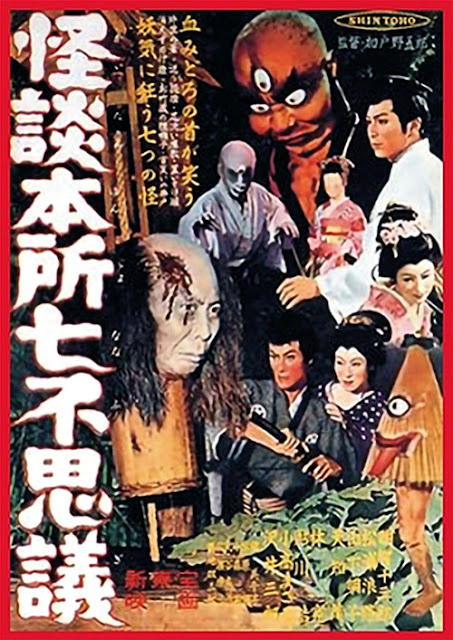 The introduction to this Shintoho b-feature could prove a bit perplexing for us many of us gaijin, as voiceover narration tells us about a Tanuki (Japanese ‘racoon-dog’) who lives in a certain area (is it Honjo?), and seems to have especially noteworthy magical powers, but the narrator never really gives us the full low-down on this, because it seems to be assumed that everybody already knows all about it..?

Well, no problem – such are the pleasures of watching films whose makers would never have dreamed that people on the other side of the world would be assessing their efforts sixty years later.

Anyway, both the film’s title and this intro (in which forthcoming events are briefly ‘previewed’ via super-imposed shots of assorted characters we have yet to meet) would tend to suggest that we’re in for an anthology film -- an extremely cut price ‘Kwaidan’, perhaps? What fun! Actually though, once things get going, it soon becomes clear that the film (which clocks in at a sprightly 54 minutes) intends to concentrate on just a single ghost story, and an achingly over-familiar one at that. But, like most of these Shintoho ghost pictures, it’s an enjoyable business nonetheless, and not without its own quirks and surprises along the way.

Initially for instance, we meet a pair of fishermen, who, eager to get to their favourite drinking place before they run afoul of that aforementioned Tanuki, run instead into a brace of Yokai, including such ten carat spooks as a faceless woman (Yokai ID currently undetermined), a big guy with the eye in his forehead (an Ao Bōzu variant, perhaps?), the ever popular hopping umbrella thing (Karakasa-kozō), the big head dude (Abura-sumashi), and even a brief appearance by everybody’s favourite, the long-necked Rokurokubi.

The effects here are actually pretty great – easily the match of those seen in Daei’s Yokai films from the ‘60s – and, though brief, it’s all lots of eerie fun. (I particularly liked the bit in which, in an odd reverse Charles Fort kinda thing, the fishermen’s catch begins to levitate, and floats off into the sky.)

The next thing we know, the aggrieved fishermen and a bunch of their friends seem to have caught the mischievous Tanuki, whom they hold responsible for sicing the spooks upon them. Before they can turn it into soup however (for such is their stated intention), the animal is rescued by an elderly samurai patriarch (Hiroshi Hayashi) who happens to be passing. Fresh from visiting the grave of his first wife, he takes pity on the poor creature, and feels an urge to save it from the brutish treatment the fishermen no doubt have in mind.

Back home however, the old man has plenty of troubles, not least the fact that his rogueish nephew (the splendidly seedy Shigeru Amachi, whom you’ll recall from The Lady Vampire and several Zatoichi instalments) is trying to scam money off him whilst simultaneously making time with his much younger second wife (Akiko Yamashita), with whom the debauched young samurai had a fling at some point in the past. (1)

Fear not though, as the grateful Tanuki spirit appears to the old man in the form of a charming young girl (Michiko Tachibana) and her accompanying folk dancing troupe. The Tanuki pledges to protect the elder’s interests in return for his saving her life, so… what could possibly go wrong, right?

It’s rare to see a Japanese period film in which the aristocratic patrician guy turns out to be the aggrieved victim of the inevitable crimes and betrayals rather than perpetrator, but Amachi and Yamashita are such a convincingly vile pair of ne’erdowells that, as soon as they’ve teamed up in an adulterous union and started plotting to dispose of the old geezer, our sympathies are firmly nailed down, and we basically know where this is all heading.

Happily though, the film soon breaks away from the formal, ‘staged folk tale’ feel common to many earlier Japanese ghost films, allowing this standard issue tale of supernatural vengeance to become a simple, yet gripping and sensationalistic, b-movie melodrama, dynamically directed by the little-known Gorô Kadono, and played out with theatrical vigour by the cast.

Considering the year of production, a surprising amount of sexual impropriety follows the inevitable violent demise of the patriarch, as the leery Amachi has his wicked way with the bride of his morally upstanding cousin and Yamashita engages in some heavy-duty flirting with craven servant Gosuke (Saburô Sawai). Meanwhile, the lightning flashes and the winds howls outside the noble family’s now thoroughly profaned residence, and we all know that a bad end for the murderous adulterers will soon be on the way.

Justice soon marches in the corporeal form of the deceased patriarch’s aforementioned chivalrous son, who has returned from an extended stay in Edo upon hearing of his father’s death (I like the fact that this good samurai helpfully wears a white kimono, whilst Amachi of course favours black), whilst our mischievous Tanuki meanwhile is of course cooking up a right old storm in the spirit realm.

It may seem a bit disingenuous to claim that a film derived (at some level of remove, admittedly) from Japanese folklore was influenced by ‘Macbeth’, but, given that Kurosawa’s ‘Throne of Blood’ had premiered seven months before this film saw release in July 1957 (just in time for the Obon season, perhaps?), the possibility of a bit of hand-me-down influence doesn’t seem entirely out of the question.

Certainly, the echoes here of Shakespeare’s immortal yarn will be plainly obvious to Western viewers, and the film definitely succeeds in evoking what I can only describe as a ‘Macbeth-type atmosphere’, as what initially seemed like a light-hearted, fairy tale type film is gradually transformed into a doom-laden supernatural revenge tragedy, culminating, inevitably, in a rain-soaked, chanbara blood-bath in which the villainous Amachi gets what’s coming to him via his cousin’s shining blade.

It’s nothing we’ve not seen many times before, but I for one am happy to see it again, and, with all this blood-curdling incident compressed into less than an hour, the story certainly doesn’t outstay its welcome. Despite the miniscule budget, the kaidan atmosphere here is thick as a bowl of fermented miso, and all the stuff with the Yokai and sundry other ghostly manifestations is a lot of fun.

There’s also a great bit with a gravel-voiced Buddhist exorcist doing his thing, until his ritual is curtailed by a rain of poisonous snakes (!), and, whilst I won't spoil the details of the fate the Tanuki and her multitudinous ‘friends’ contrive for the bad guys, but it’s rather delirious and wonderful, in the best tradition of these kind of b-kaidan pictures.

Strangely enough, the most disappointing aspect of ‘..Seven Wonders of Honjo’ is probably the music, which consists of lazy/random needle drops that often undermine the painstakingly rendered atmos to a certain extent, particularly during the finale, in which the highly charged sword battle is sound-tracked by what sounds like a jaunty, brass band marching theme that sounds like it was pulled off some dusty old disc left behind by the U.S. occupying forces.

I can’t for the life of me imagine why the film’s producers chose to lay this down over the action in preference to some more appropriate and evocative Japanese music (which must surely have been available to them), but, given the extreme haste with which films like this one were presumably knocked out, I doubt anyone had time to quibble over such details in post-production. Visually, this scene is excellent, so it's a real shame that the music makes such a mess of it, but what can you do?

That aside though, whilst this marginal and rather eccentric item may not exactly be the best place to start with vintage Japanese ghost films, it’s a delightful surprise for those us of who already have a taste for them.

I’m still none the wiser regarding “the Seven Wonders of Honjo”, but I’m sure they can wait for another day.

(My profound thanks to the heroic souls who recently fan-subbed this film and stuck it up on the interweb, incidentally.)

(1) An actress who seems to have worked almost exclusively in the milieu of Shintoho ghost movies, Yamashita can also boast appearances in in ‘Girl Divers at Spook Mansion’ (1959), Ghost Cat of Otama Pond (1960), and an apparently Western-inclined vampire movie whose existence I was previously unaware of, 1960’s ‘Vampire Bride’ [‘Hanayome Kyûketsuma’].