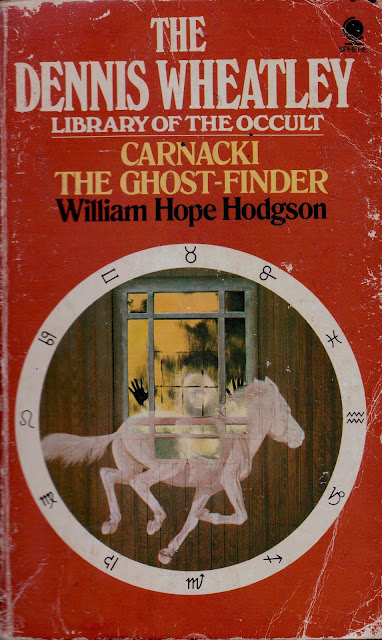 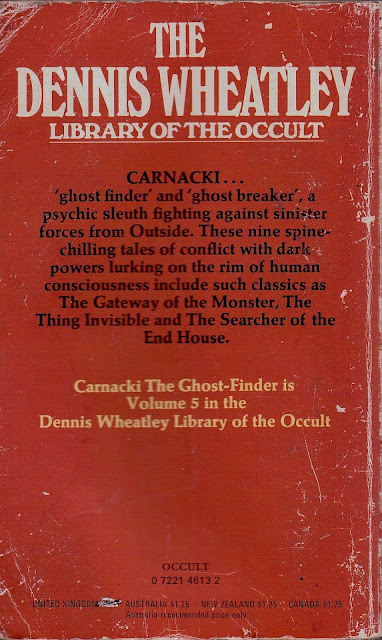 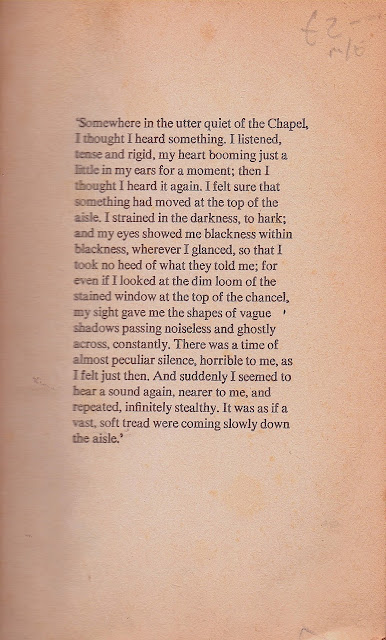 To get us in the mood for the start of this year’s October Horrors season next week, I thought it would be a nice idea to highlight a few suitably eerie occult/horror-ish paperbacks from my shelves – which led me directly to pulling down the few volumes I own from The – ahem – Dennis Wheatley Library Of The Occult.

Now, say what you like about Wheatley (and I’ve said plenty in the past), but this line of paperback reprints, which he masterminded on behalf of Sphere books during the mid-70s, must have been an absolute god-send for fans of weird fiction at the time – and indeed it remains so for anyone seeking affordable second hand copies of the wide variety of obscure works the line helped bring back into circulation.

That said, I’m going to assume that most of my readers here will have at least a passing familiarity with William Hope Hodgson and his ‘Carnacki’ stories. Like most of Hodgson’s supernatural fiction, the adventures of his 'Electric Pentangle'-brandishing occult detective feel both wildly ahead of their time and frustratingly uneven – the latter largely a result of the author’s insistence upon reducing at least some of his hero’s cases to light-weight hoaxes and comic misunderstandings.

Though none of these stories really display the same extreme idiosyncrasies that defined Hodgson’s far-future myth cycle ‘The Night Lands’ or his masterpiece ‘The House On The Borderland’, the best of them are nonetheless superb, with ‘The Hog’ in particular standing as one of the most intense examples sustained cosmic horror ever printed.

If you’ve not read them before, I’d humbly suggest this book (long out of copyright and available in wide various of inexpensive editions) would make a great addition to your Halloween reading list – particularly if you can find it between these splendidly evocative covers, with unaccredited artwork paying blatant homage to Mario Bava’s ‘Kill Baby Kill!’ (1966), a film whose influence seems to have spread remarkably widely in view of how poorly received and sporadically distributed it was upon its initial release.

[UPDATE, 24/10/18: It would be remiss of me not to link to this 2012 post from John Coulthart's blog, which I stumbled upon today. Coulthart traces the use of the image from ‘Kill Baby Kill!’ back to a still which appeared in Denis Gifford's unfeasibly influential ‘A Pictorial History of Horror Movies’ (1973), from whence it was subsequently repurposed by any number of illustrators and designers.]

Well, that’s what I think about it anyway. Let’s see what Dennis had to say on the matter. 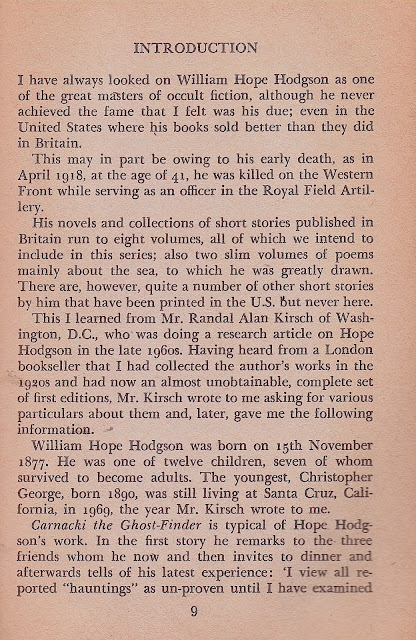 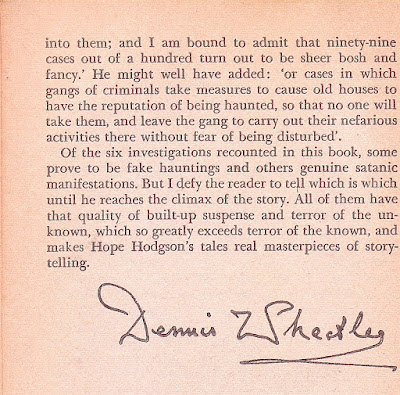 I like the fact that some of the cases turn out to be hoaxes or common causes. Gives it more of a twist than if everything had turned out to be supernatural.

Theres been some good WHH activity this year, what with it being a 100 years since his death - really should look into those stories of the sea he did, as I'm partial to a watery themed tale.

Thanks for your comment Maurice! I must have missed out on any Hodgson centenary events.

Regarding his nautical tales meanwhile, all I can say is, wait a couple of days....

That description by Wheatley sounds like the inspiration for Scooby Doo.