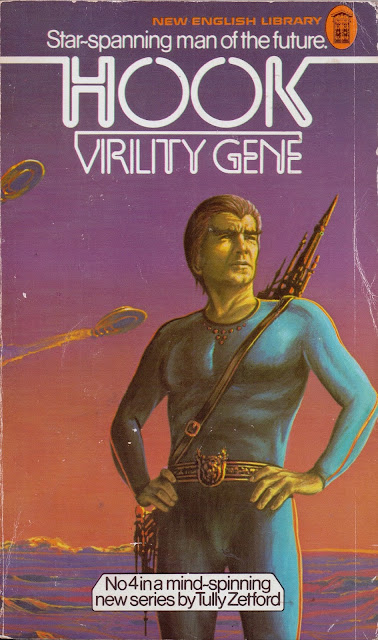 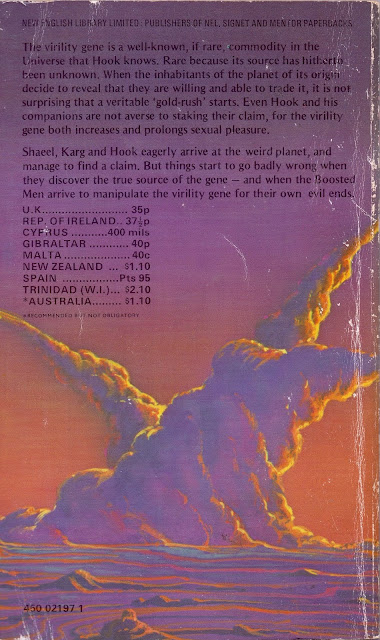 You know that feeling when you pull a promising looking book off the shelf in Oxfam and think, “what the actual fuck”?

I’m not sure whether the gentleman portrayed on the cover (‘Hook’ himself, presumably) has already been dosed up with some ‘virility gene’, or else is just exalting in the fact that he clearly doesn’t require any, but either way, his hastily sketched lower quarters speak for themselves.

You will also note that he appears to be carrying a model of a gothic cathedral around on his back, but… what this uncredited cover art may lack in terms of SF verisimilitude, it more than makes up for in its dedication to what I suspect was a New English Library editorial edict that, wherever possible, SF BOOKS SHOULD BE PURPLE. (I’d love to pin down this exact shade of ‘NEL purple’ for some future home redecoration project.)

Scanning through the book before writing this post, it actually seems as if it might be quite a lot of fun. Clearly written in a spirit of tongue-in-cheek self-mockery, and with an eye to the ‘70s pulp market’s seemingly unquenchable appetite for numbered action series in which unstoppable, sub-Bond heroes perpetrate blood-curdling mayhem, it’s two-fisted, laser-blasting fight scenes, lusty drunken carousing, bizarre future-slang banter (‘gonil’ appears to be this world’s expletive of choice) and saucy intimations of inter-species hanky panky as far as the eye can see.

Tully Zetford, it turns out, was one of many pseudonyms used by the prolific Kenneth Bulmer, who we last encountered here via his ‘hard-luck spaceman’ yarn To Outrun Doomsday. NEL published four ‘Hook’ novels in 1974-75 (‘Virility Gene’ was the final one), but the indefatigable Bulmer proceeded to knock out a further six instalments in the series under his own name, although curiously, these were published only in German, and all appeared simultaneously in 1988.

while the book maybe 'Star-Spanning' and 'Mind-Spinning' your description of the cover art made me spit my tea out. Thank you.