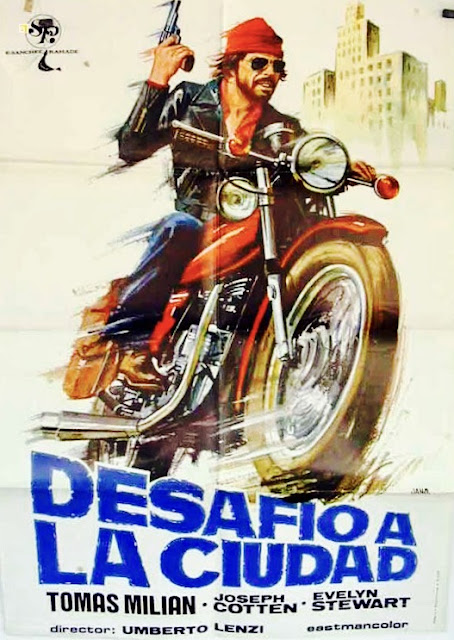 Despite its lurid English release title – and despite the fact that director Lenzi was responsible for several of the more savage entries in the poliziotteschi canon – ‘Il Giustiziere Sfida la Città’ [literal translation: ‘The Executioner Challenges The City’], which hit Italian screens in August 1975, actually stands as one of the mildest, most easy-going contributions to the genre.

In fact, you’d also need to snip away a few brief moments of violence here and there and you could probably present this one as a family friendly action-adventure movie - about as far removed from the excesses of films like Mad Dog Killer as it’s possible to get whilst still remaining under the wider umbrella of ‘euro-crime’.

For better or for worse – and really, it’s a mixture of both - It appears that the responsibility for this surprising shift in tone sits primarily with the star of ‘Syndicate Sadists’, the late, great Tomas Milian.

After spending the better part of a decade portraying a variety of boggle-eyed peasant tricksters and fevered psychopaths in Italian genre films, the sheer gusto Milian brought to the screen had by this point made him somewhat of a bankable - if unconventional – star in Italy, and it seems he thought he deserved a chance to prove himself as a straight action hero. Apparently the producers/backers of ‘Syndicate Sadists’ agreed, and Umberto Lenzi (now equally late and great, sadly) was engaged to direct what basically amounts to an unashamed star vehicle for the Cuban dynamo.

Lenzi had previously worked with Milian on the preceding year’s ‘Almost Human’ [‘Milano Odia: La Polizia Non Può Sparare’], a stone-cold classic of misanthropic ‘70s crime/exploitation cinema that arguably marks a high watermark for both men’s careers. Such was the intensity with which Milian’s character committed bloodcurdling atrocities in ‘Almost Human’, the film was marketed as a horror movie when it reached the USA, and, again, the extent to which ‘Syndicate Sadists’ pulls a total 180 on any expectations this may have been in place for the director and star’s subsequent crime picture is remarkable.

Having pushed himself about as far into the realms of nihilistic psychopathy as it’s possible to go whilst still returning safely in ‘Almost Human’, it is perhaps understandable that Milian thought his screen persona was in need of a little TLC, lest he spend the rest of his life watching people cower in fear when he passed on the street, and it is plainly obvious that reinventing himself as a card-carrying Good Guy was his main objective in ‘Syndicate Sadists’.

To give you an idea of the level of control Milian exerted over this production, legend has it that whilst en route to Rome to begin shooting, he picked up a copy of David Morrell’s novel ‘First Blood’ (which would of course become the basis for the 1982 film of the same name, introducing the world to Sylvester Stallone’s Rambo for the first time) at the airport. Apparently impressed by the book, Milian is said to have demanded that his character in ‘Syndicate Sadists’ be named “Rambo” – in spite of the fact that the name was perceived to be both meaningless and faintly comical to Italian audiences.

Nonetheless though, the star got his way, and ‘Syndicate Sadists’ is all about RAMBO. Everybody in the somewhat anonymous version of Milan in which the film takes place knows about Rambo. Men respect him, women adore him, and evil-doers freeze in fear at the very mention of his name.

Swathed in gigantic driving goggles and sporting a fetching variety of winter jackets, woollen hats and scarves (most of them red) alongside his shaggy hair and full beard, Rambo certainly cuts a striking figure during the movie’s opening credits, as – accompanied by Franco Micalizzi’s rousing crime-funk score - he roars into town on his bright red motorcycle, returning home after an unspecified period out on the road (presumably “finding himself”, or defending sundry innocents from the depredations of criminals, or somesuch).

Part hobo, part hippy, but all two-fisted defender of justice and freedom, Rambo is an action hero wrought from the uniquely eccentric sensibility of Tomas Milian, and, assuming you’re in the right frame of mind to tolerate such a colossal display of egotism on the actor’s part, he’s a pretty awesome guy to have around.

Early in the film, Rambo is reunited with his brother (a mild-mannered cop who has been suspended and victimised for failing to toe the line re: the city’s endemic corruption problem), and our hero accompanies him on a visit to his new place of work - the HQ of a kind of organised vigilante organisation that has been set up to tackle the rampant criminality that has resulted from aforementioned corruption (in the absence of Rambo’s saviour-like presence, presumably).

Here, Rambo wastes no time in stripping down to his vest to out-karate this private police force’s karate experts (Milian’s kung fu is a sight to behold), before he casually out-shoots their gun people on the pistol range, and finally earns himself a warm handshake from the boss of the outfit, who tells Rambo he’s exactly the kind of guy they’d like on their side, if only he’d settle down and accept the offer of a steady job. No dice though of course – Rambo’s a lone wolf, following nothing but the winds of fate.

As you might well have expected, these winds soon lead Rambo directly toward the sharp end of sorting out the city’s law and order problems, after his brother is killed whilst investigating the kidnap of a cute little kid, snatched as part of a feud between organised crime families. Needless to say, our hero’s lone wolfin’ philosophy is temporarily put to one side, and he’s hot on the heels of justice (with a tasty dose of vengeance thrown in for good measure).

What follows is a fairly half-hearted rehash of the old ‘Red Harvest’/’Yojimbo’/’Fistful of Dollars’ formula, as Rambo alternately tangles with both Gang Boss # 1, Senor Conti - played in super-cool, menacing fashion by Luciano Catenacci, whom you may recall as the bald-headed burgomeister in Mario Bava’s ‘Kill Baby Kill!’ – and Gang Boss #2, the tellingly named Paternò, played by no less a personage than Joseph Cotten.

As per usual in his late career appearances in Italian films, Cotten proves an awkward and belligerent presence here, alternately muttering and yelling his lines as he putters ineffectively around the reception room of his hideously decorated out-of-town mansion. It seems that Rambo was at one point a protégé of Paternò, before he went his own way, and upon returning, he is saddened to discover that his former boss has now gone blind (which certainly helps explain the décor), and not a little crazy to boot. Effectively incapacitated by his blindness, Paternò is reliant upon his new right hand man – his son Ciccio, played by Alfredo Lastretti, last seen as the Dario Argento lookalike killer in Lenzi’s Spasmo.

The film retains a certain amount of sympathy for Paternò (the old “he’s out of touch and doesn’t really know what his underlings are up to” excuse), and as such it is Ciccio who becomes the true villain of the piece. Played by Lastretti as a prissily effeminate ‘glowering pervert’ stereotype, it is he who is presumably supposed to be the “sadist” of the film’s English title, as is aptly demonstrated by the film’s most gratuitous incidence of nastiness, wherein he and his goons assault and murder Rambo’s on/off girlfriend Flora (a thankless role for the wonderful Femi Benussi).

Though this scene isn’t remotely as grim or explicit as one might reasonably have expected of a mid-‘70s poliziotteschi, it is shocking simply in terms of its complete irrelevance to the storyline - especially given that Rambo reacts to the news of Flora’s death with little more than a shrug and a grunt (because, hey, what’s a girlfriend or two in comparison to the death of his BROTHER, who was a GOOD COP, and MUST BE AVENGED, etc).

Whilst ‘Syndicate Sadists’ boasts a few action sequences that are a lot of fun, executed with Lenzi’s characteristic flair – see for instance a pool hall ass-kicking extravaganza modelled after the one in Don Siegel’s ‘Coogan’s Bluff’, or the numerous scenes in which Milian screeches around back roads on his motorbike playing cat-and-mouse with the baddies – the sad truth is that, for the most part, the director seems all at sea with Vincenzo Mannino’s comparatively light-hearted script, and the film flounders as a result.

With a tone that veers uneasily between crime movie nastiness and blockbuster heroics, never fully committing to either, the sense of relentless forward momentum that characterises Lenzi’s best films is lost amid an expanse of repetitious, unfocused character scenes that stretch out between the picture’s relatively modest action highlights.

Where the rushed productions schedules and narrative deficiencies of many second tier poliziotteschi tended to be counter-balanced by the gritty violence, madcap energy and evocative location shooting that makes the genre so appealing, Lenzi & Milian’s decision to jettison these saving graces in favour of pursuing a more mainstream action-adventure direction eventually leaves ‘Syndicate Sadists’ looking like a rather muddled, sub-par example of the form; but, it is nonetheless one that I think can prove a great deal of goofy, undemanding fun, if approached with yr expectations in check.

Basically - your enjoyment of ‘Syndicate Sadists’ will depend entirely upon your tolerance for Tomas Milian and his antics. The entire movie essentially exists as a salve to his ego, and in a sense that in itself is hilarious. Personally, I love the guy whenever he is able to keep the comedic side of his persona in check, and thankfully he does so here, playing it straight as an arrow with his charisma in full effect, irrespective of the project’s inherent ridiculousness.

The kind of oddball hero Milian presents here is a character that could ONLY have worked in his hands, and, if you’ve ever watched him in one of his more sweaty/psychotic roles and found yourself wondering what it would be like to see this guy dispensing life lessons to small children, “living by a code” and riding nobly into the sunset on a big, red motorbike of justice – well, this is the movie for you.

Given that Milian returned directly to his more conventional “twitchy psycho” parts in Lenzi’s ‘Rome Armed To The Teeth’ (1976) and ‘The Cynic, The Rat and The Fist’ (1977), I’m assuming that this re-branding exercise didn’t prove an immediate success, but, like most of his characters, he was nothing if not persistent.

In between those assignments, he got another shot at a scruffy / unconventional action hero role, playing hirsute cop Nico Giraldi in the Bruno Corbucci-directed ‘Squadra Antiscippo’, aka ‘The Cop in Blue Jeans’, (1976). This time around, the movie proved such a success that Milian got to reprise the character in no less than eight(!) increasingly comedic sequels, leading right up to his eventual departure from what was left of the Italian film industry in the mid-1980s.

Having never acquired much of a taste for Italian comedy, I’ve not yet dared delve into the Nico Giraldi movies (the posters alone are enough to put me off), but, in retrospect, we can perhaps see ‘Syndicate Sadists’ as an entertaining, if misfiring, first step in this transition between the “bad ass” and “lame ass” phases of Tomas Milian’s career in Italian crime films. And, thank god, it is one in which the laughs he and Lenzi bring to the table are entirely unintentional, as is only right and proper. 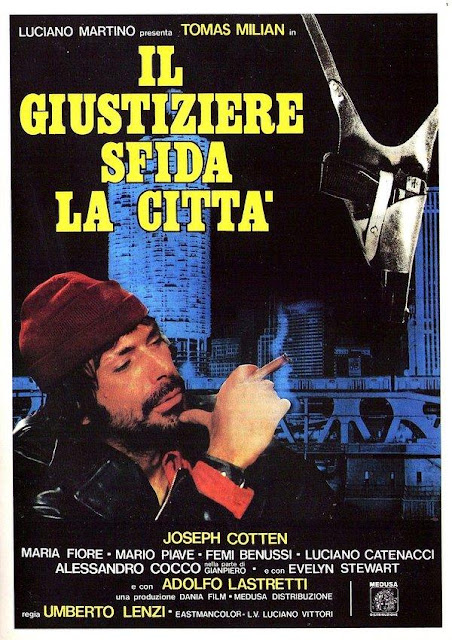 Tomas Milian was indeed great. He was never given the respect and roles he deserved by USA filmmakers except for Andy Garcia.