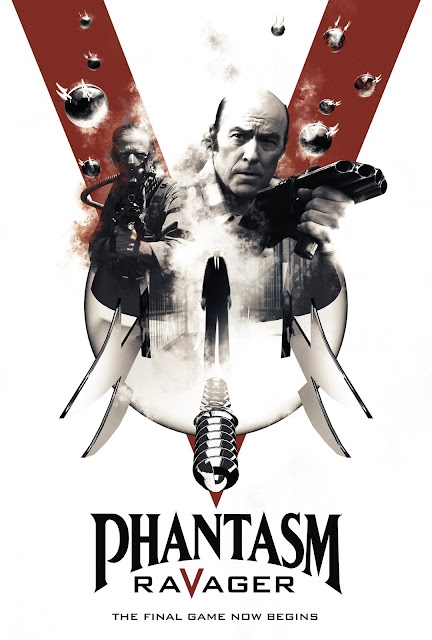 To begin by getting the negatives out of the way then, let’s grit our teeth and say it straight: ‘Phantasm: RaVager’ is not, in the conventional sense, a good film.

First time director/cinematographer/editor/co-writer David Hartman (do you hear any alarm bells ringing yet?) is undoubtedly a genuine fan of the Phantasm series, and clearly did his best to do right by it, and I’m sure he’s a lovely guy too, but… sadly it takes more than good intentions to make a good movie – especially when one is stepping into the shoes of a filmmaker as gifted and conscientious as Don Coscarelli.

I could be wrong on this, but I believe that ‘RaVager’, which sneaking out quietly towards the end of 2016 and thus far largely seen via its inclusion on the Phantasm blu-ray box sets released in the US and UK in 2017, was initially conceived as some kind of series of online short films, and was only reconfigured as a stand-alone feature fairly late in the planning process. This could account to some extent for the finished film’s disjointed structure, erratic pacing and wildly inconsistent production values – not to mention the grim decision to shoot the whole thing on all too obvious digital video – but, sadly, there are clearly some failings here that run even deeper than that.

For much of its run-time, ‘RaVager’ basically plays out like a student film made by a Phantasm super-fan who was lucky enough to persuade the original cast members to help him out. Framing, editing, and sound-mix are frankly all over the place, and, during Reggie’s action/adventure scenes in particular, tribute is paid to the earlier films largely by means of merely repeating bits from them in a cheaper and more amateurish fashion.

But, I can deal with this. It could even be considered kind of charming, in a big-hearted DIY/’fan fic’ sort of way. No, what really gets my goat here is the egregious and often absurd reliance on CGI effects, which more or less dominate the second half of the picture.

Now, this isn’t so much a criticism of the decision to render the film’s obligatory sphere effects through digital means. As much as we may wish to celebrate the work of the poor guys who spent pain-staking weeks swinging those things around on fishing lines and pitching them down corridors like baseballs during the production of the earlier films, we probably also need the recognise the fact that, for a one-camera guerrilla production in the 21st century, that was not really a realistic option.

So - computer-generated balls I can live with. Entire computer-generated landscapes and people however – that’s a bit much, especially when they’re realised with the kind of limited resources and time constraints that were obviously in place here.

Looking somewhat like ‘90s video game cut scenes reprogrammed by a fevered teenager with a head full of Michael Bay movies, ‘RaVager’s “animated” sequences – which purport to depict a kind of ‘dark future’ apocalyptic cityscape full of gun-wielding fighting goons, ruled over by The Tall Man and his tower block-incinerating giant spheres(!) – are mind-bogglingly awful.

In conception as well as execution, this whole aspect of the film is infuriatingly misguided, essentially disregarding the carefully-wrought sense of apocalyptic dread that Coscarelli painstakingly built up through the preceding films [see my earlier post on the subject here], and replacing it with… a load of absolute nonsense, to be frank. I mean – why are there giant spheres, for pete’s sake? How do they in any way correspond to the information regarding the creation and function of the spheres we have gained from previous films?

“This is HIS world now” is supposed to be the big revelatory line before we’re taken on a whistle-stop tour of this imaginary landscape, but, we have *already* seen plenty of “his” plans for the world in Phantasms III and IV - and weird, red-tinted 16-bit Duke Nukem nightmare cities did not feature within them.

But - never mind. I’ve made my point, no sense in dwelling on it. Let’s move on. I believe I mentioned some good news, so let’s get to that.

Basically: just to see Reggie, Michael, Angus, and indeed Bill Thornbury, reunited, playing their long-standing roles one more time after a gap of nearly two decades, is a joyful occurrence. As Kim Newman points out in his essay accompanying the UK Phantasm box set, the sheer length of time over the which the series was shot – over thirty-five years – is one of its most unique features, allowing the films, when taken together, to assume a feeling of “strangeness and melancholy” that extends beyond each individual instalment. Watching actors mature before our eyes, “from childhood to middle age” (in Baldwin’s case), or “from black-haired maturity to white-haired last days” (in Scrimm’s case) can be a jarring experience indeed for first-time viewers, and it is against this background that some of ‘RaVager’s ‘character’ scenes are able to emerge as genuinely very good, irrespective of the intermittent silliness that surrounds them.

As well as retaining a role here as producer, Don Coscarelli also receives a credit as co-writer with Hartman, and, I’m going to *assume* (perhaps incorrectly) that he contributed the idea for what is the best of several mixed up plot strands running through ‘RaVager’ - namely the one that deals with an elderly Reggie waking to discover that he is confined to a nursing home, suffering from dementia.

In a direct reversal of the situation at the start of Phantasm II, Reggie is still ranting about The Tall Man and his machinations whilst Mike – now a rather cold, middle-aged professional – tries to talk him out of it, and to push his mind in a healthier direction.

This, I think, is an absolutely beautiful way in which to end the series, which, in taking us through the stages of its’ characters’ lives, has essentially gone full circle, moving from Mike as a child, battling The Tall Man as he faces the outset of maturity and adulthood, to his older friend remaining similarly preoccupied as he faces up to his own mortality.

Mirroring the fondness many of ‘Phantasm’s fans feel for the series, which in some cases has been with them for most of their lives, this fifth film finally sees the supernatural paradigm that our characters experienced as a living nightmare in 1979 transformed into a reassuring, comfortable fantasy.

By escaping into his dreams(?) of battling The Tall Man with his loyal buddies at his side, Reggie finds a peace beyond the inevitable progress of his debilitating and ultimately chronic illness. For all of Mike’s futile efforts, it is hardly surprising he doesn't want to come back to “reality”.

Inevitably, the fact that the real life Reggie Bannister is celebrating his 72nd birthday next month, whilst the late Angus Scrimm was approaching his 90th when he filmed his scenes for ‘RaVager’, adds a great deal of weight to these themes, and both performers, along with Baldwin, step up to the plate to do full justice to this somewhat more potent aspect of the film.

To not put too fine a point on it, death – the ways in which we cope with it, the ways we contextualise the death of loved ones, and the ways we can understand, avoid or accept our own experience of aging - has always been the main theme of the ‘Phantasm’ series.

And, you would be hard-pressed to find a better way to bring this home than the brief scene in ‘RaVager’ that sees the hospitalised Reggie awakening from a medicated stupor to find himself face to face with none other than Angus Scrimm – in his benevolent Jedidiah Morningside alter-ego – who is occupying the bed next to him.

“You know Reggie,” says Jebidiah, “I hate to be the bearer of bad tidings… but I believe they bring us here to die”. Both actors – friends in real life for as long as their characters have been enemies on screen - seem to have been fully aware of how heavily loaded with secondary meaning this dialogue is for them, and I wish that this storyline (which is somewhat reminiscent of the themes Coscarelli explored in his 2002 film ‘Bubba Ho Tep’) could have been explored more fully in ‘RaVager’.

Aside from a few token appearances in his familiar Tall Man guise, this was Scrimm’s last proper dialogue scene in a ‘Phantasm’ film (and indeed, in any film) before he passed away in January 2016, and it provides an perfectly poignant way for this widely loved actor to bow out.

For all its faults, moments like this more than justify ‘RaVager’s existence, and, as Reggie subsequently fantasizes his way into a nightmare world of Star Wars-esque underground resistance to The Tall Man’s evil empire, eventually finding himself zooming along the cracked highway into the hills in a battle-rigged, Mad Maxed-out Cuda, with Jody at the wheel and Mike beside him in the front seat, ready to fight for humanity and friendship…. well, it’s as happy an ending as we could wish for for ol’ Reggie too.

In its best moments, ‘RaVager’s woozy blurring of reality, fantasy and meta-textual commentary, its uneasy shifts between the chilling sadness of Reg’s bed-bound paranoid reveries and the promised future of camaraderie and adventure with his old buddies, creates a knot in our guts that hits as hard as anything in Coscarelli’s preceding films.

Though probably best viewed more as an epilogue / fan love letter to the ‘Phantasm’ series than a fully-fledged new instalment, speaking as one of those fans, I am still happy ‘RaVager’ exists. For the warmth it has for its characters, and for the space it gives the cast to flesh them out just one last time,  I am thankful to Hartman, and to everyone else concerned, for bringing this story to a fitting and heart-felt close.