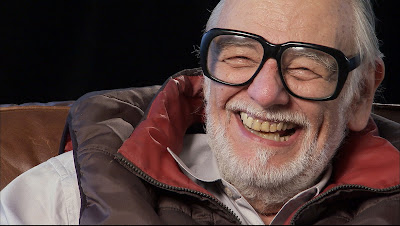 Like most people reading this I’m sure, I was saddened to wake up this Monday morning to the news that George Romero has passed away.

Turning on the radio whilst I made my breakfast, I was slightly taken aback to hear, of all things, Ed Harris enthusiastically reminiscing about working with Romero on ‘Knightriders’ in 1981 – and, a few seconds later, the penny dropped. Receiving the news via the gracious and heart-felt recollections of Mr. Harris was surely a hell of a lot better than catching Radio 4’s presenters delivering some sardonic, and-in-other-news bit about “the man who invented zombies” or somesuch, so – thanks for that Ed, I appreciate it, and thanks too to whoever at the BBC decided to give him a call.

A death like this represents a lot of stuff to unpack, not only for horror fans, but – I would like to stress – for anyone who gives a hoot about independently minded American cinema in general. I don’t have anything like the time or means to embark on a full scale obit today (hopefully we can return for some follow ups later), but let’s start out on a personal level and see where this goes.

I was a pretty late comer to horror movies – through my teenage years I was far more devoted to science fiction and quote-unquote “serious cinema” – but when I did begin to become fascinated by the genre, Romero was my way in. Probably this was because, whilst the majority of his films are IN the genre, they rarely seemed OF the genre, if you get what I mean.

‘Night of the Living Dead’ (recorded off the TV) was one of a very small handful of movies I would obsessively watch over and over again through the years on either side of my twentieth birthday. There’s probably not much I can say about it that hasn’t been (exhaustively) said before, but something about it (the sheer, uncompromising, punk-spirited grimness of the whole venture and it’s refusal to collapse into camp despite the cheap/pulpy context,  I suspect) kept me coming back for another dose, and, though I perhaps would no longer deem it The Best Horror Movie Ever as I did in 2011, to this day it remains one of those films I could watch pretty much every day without getting tired of it.

Inevitably, ‘Dawn..’ and ‘Day..’ (both also recorded off TV) followed, then ‘Martin’ and ‘The Crazies’ (bought second hand on Redemption VHS). All of these were – and are – fucking brilliant, and by this stage in my descent into cinema fandom, Romero was The Man as far as I was concerned.

In my mind, I built him up as a truly heroic figure, and never tired of telling people how great I thought he was. Conspicuously ignoring some of the more errant entries in his filmography, I saw him as the guy who never put a foot wrong – this bad-ass auteur who systematically rejected Hollywood bullshit, but wasn’t some pretentious arthouse type either. An underappreciated genius who had to fight to make his films, and who only ever rolled camera when he was sure he could do so on his own terms, with his own people – that’s how I saw it. Mighty George Romero, shakin’ the world once or twice a decade with works that were intelligent, imaginative, exciting, fast moving, socially conscious, harrowing, anti-authoritarian and authentically (though not gratuitously) violent. He made movies that treated their audience with respect, and didn’t let them down. A filmmaker of the people! A Cassevetes of the grindhouse!

And, as far as the selected canon of films I’ve referenced above is concerned, I think such hyperbole is still entirely justified, to be honest. But, had I dug deeper and come up with some of the maestro’s, uh, let’s say, slightly more questionable projects (‘There’s Always Vanilla’, ‘Two Evil Eyes’, ‘The Dark Half’, etc.), my enthusiasm might have been more sensibly tempered for his 21st century comeback.

As it was though, my anticipation when ‘Land of The Dead’ was announced was into the stratosphere. I had faith. And so, needless to say, I was pretty devastated when finally I saw the damn thing.

I know ‘Land..’ has gained some degree of retrospective appreciation within horror circles since its release, but at the time I hated every single thing about it, and have never had the stomach to revisit it. That The Great George A. Romero could take probably one of the biggest budgets he’d ever been accorded and return with a bunch of crap that resembled one of the dumb direct-to-video flicks I’d rent to kill time in the late ‘90s was a disappointment I just couldn’t even comprehend.

Today of all days though, we should probably draw a veil over the past few decades of creative frustration and disappointment, and just reflect that, hey, how many great independent/genre filmmakers *didn’t* hit similar brick walls after the year 2000? (I’m no industry insider, but suffice to say, I don’t think it was mere personal failings that similtaneously stopped the wheels rolling for Carpenter, for Argento, for Lynch, Franco, Hooper, Don Coscerelli, Ken Russell… and so the list goes on.)

Nowadays, I hope I have managed to attain a somewhat more nuanced take on Romero’s legacy, and am happier to embrace the strange and sometimes misguided places that his idiosyncratic approach to filmmaking took him in-between his aforementioned ‘hits’.

Looking over Romero’s filmography today, by my count he directed seventeen films, of which *seven* could conceivably be termed masterpieces – a hit rate not many Hollywood directors could compete with, and an especially remarkable achievement given the marginal/cash-strapped circumstances under which he usually worked.

Thus far unmentioned amongst those golden seven, I have of course come to love 1982’s ‘Creepshow’ as a wonderful Friday night horror flick, a total 180 from the stark realism of his other horror films and one of the best ever attempts to transfer a comic book aesthetic to film, but the one I keep coming back to, and that I immediately wanted to watch again upon hearing the news today, is ‘Knightriders’ – one of the most ambitious, and undoubtedly the most personal, project on Romero’s CV, and arguably his defining statement as a director, from a purely auteurist standpoint.

It is, admittedly, a hugely indulgent, over-long, melodramatic, shamelessly self-mythologising piece of work – but when it comes to a director like Romero, I’m willing to indulge. As a two hour plus tribute to the kind of independent creative spirit in which he believed, and to the extended filmmaking family in Pittsburgh who helped him realise his vision, ‘Knightriders’ is a uniquely moving film. The celluloid equivalent of a ragged victory banner waving in the breeze, it was doomed to commercial failure from its very inception, and is all the better for it.

In fact, I would go as far as to say that, if you’re thinking of paying tribute to Romero by watching some of his films this week, perhaps put the zombies to one side for five minutes and instead cue up‘Knightriders’ for a broader appreciation of the man whose voice and vision American cinema has lost this week. (And when ol’ Ed Harris returns to claim his crown at the end, there won’t be a dry eye in the house, I’m telling you.) 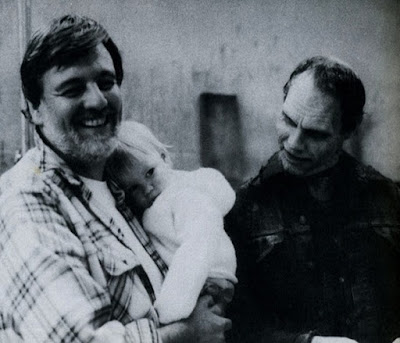