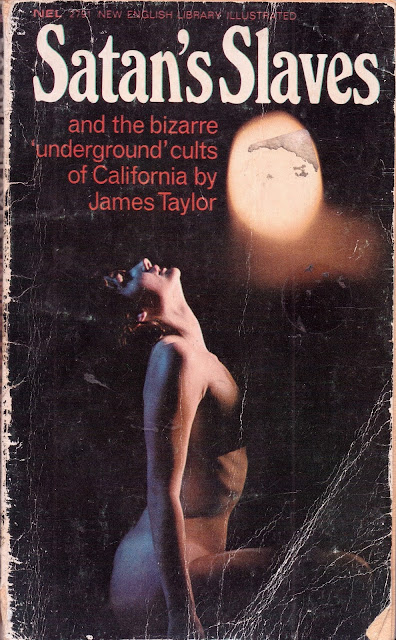 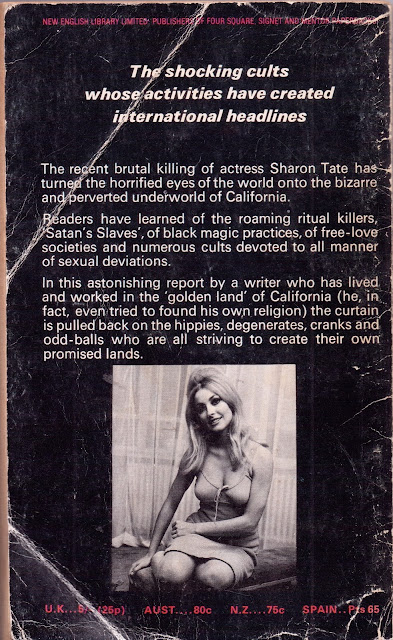 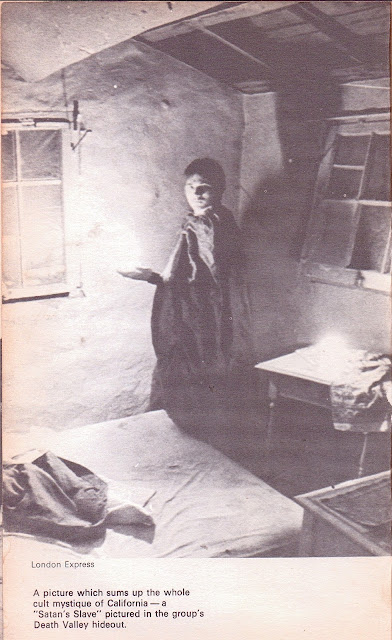 Following on from the Manson-ite speculations contained in my review of The Dunwich Horror earlier this month, not to mention the recent announcement that Quentin Tarantino intends to make a new Charles Manson movie (reaching cinemas in time for that all important 50th anniversary, no doubt),  this feels like as good a moment as any to pull this one off the shelf and give it a quick once over.

New English Library hold a well-deserved reputation as the sleaziest of UK paperback imprints, but even so, they really outdid themselves here with an example of pulp non-fiction at it’s most crassly exploitative, complete with an unaccredited publicity shot of the recently murdered Sharon Tate gracing the back cover.

Predictably enough, searching online for info pertaining to one ‘James Taylor’ who “tried to found his own religion” in “the ‘golden land’ of California” yields little, but regardless, we can assume that the whole ‘religion’ thing didn’t work out too well for the mysterious Mr Taylor, as the early months of 1970 seem to have found him taking a deep breath and banging out no less than 127 pages of prose for NEL, armed with nothing more than a few newspaper articles, a passable command of contemporary hipster patter and a vague memory of watching some horror movies.

As a result, I think we can safely claim that ‘Satan’s Slaves’ was one of the first (if not THE first) “Manson books” to hit shelves anywhere in the world – an achievement only slightly undermined by the fact that it is utter bollocks.

That’s not to say of course that it is anything less than a wholly enjoyable read for those of us inclined to read such a thing in the first place. Writing in a free-flowing, gonzo style that allows him to leave narrative strands hanging whenever he feels like it and switch subjects on a dime, Taylor initially sets out his stall with a bunch of vague “L.A. – city of evil” / Hollywood Babylon type think-piece blather, before giving a general “overview for the squares” of the expansion of California’s 1960s counter-culture from it’s Beat Generation origins through to the glory days of Haight/Sunset decadence.

Taylor then moves on to a few case histories of earlier L.A.-based religious hucksters (Father Riker, L. Ron Hubbard, Sister Aimee McPherson), all related with the “insider gossip” curled lip sneer of a mid-century tabloid expose. Adding to the general tabloid vibe, the author also throws in some great, entirely arbitrary, chapter headings like ‘NO HALO FOR SATAN’ and ‘INTERCULTIC BATTLEGROUND’, which I enjoyed. He also goes into great detail concerning the careers of certain cult leaders and religious organisations (eg, the ‘Bakar Ifna Temple’, ‘Charles Irish’) whose activities remain so thoroughly underground that a google search turns up nothing except references to this book.

More parochially, the supposedly California-dwelling Taylor also finds time to criticise the ‘blundering’ attitude of Britain’s Labour government in reforming the trade unions, and complains that the MBEs awarded to The Beatles are “little short of bribery”, for some reason.

Charles Manson himself fades in and out of the book’s digressive flow, with the paucity of concrete info available to Taylor at the time of writing sometimes becoming painfully clear. [Although the month of this book’s publication in 1970 is unknown to me, the author mentions several times that a date for the Family’s forthcoming trial – which began in June of that year – had not been set whilst he was writing.]

Interestingly, Taylor does reference the alleged connection between Manson and The Process Church of the Final Judgement, demonstrating that this idea (now a ubiquitous part of the mythos surrounding Manson) was already common currency even this early in the game. He also speculates, apropos of nothing, that Manson might have picked up some of his mystical hoo-doo by “meeting a Scientologist in prison”, so… there ya go.

Happily, when rehashing the available press cuttings starts to run thin, Taylor wisely decides to take off into the realms of pure fantasy, penning a number of lengthy, entirely fictional fantasias of Death Valley orgies and Satanic invocations whose blood-curdling content could have fitted right into some post-Manson hippie horror movie of the ‘Werewolves on Wheels’ / ‘I Drink Your Blood’ variety. At some point in proceedings, the author even seems to drift into an assumption that Manson and his followers were actual, card-carrying Satanists (see caption on the photo above), and he also alleges that Manson personally ordered the slayings of at least twenty five people in the Los Angeles area.

Needless to say, if you dig the particular aesthetic of this cultural moment, and if the extreme bad taste of the whole venture doesn’t put you off, ‘Satan’s Slave’ proves an absolute hoot, best enjoyed as a piece of somewhat factually-influenced pulp fiction.

[UPDATE: according to this paragraph in Tony Allen’s ‘Brit Pulp! The Fast and Furious Stories from the Literary Underground’ (Sceptre / 1999), ‘Satan’s Slaves’ was actually the work of frequently pseudonymous NEL scribe James Moffat, best-known for writing the ‘Skinhead’ series and various other young adult books under the name ‘Richard Allen’.]