The Adventures of John Carpenter
in the 21st Century: Intro. 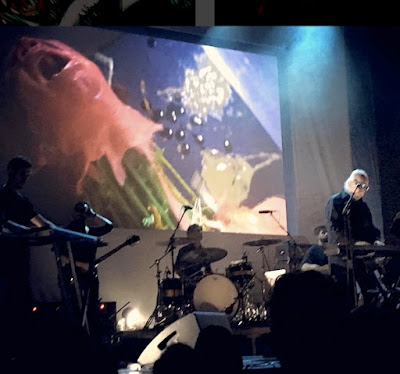 Mr Carpenter stood at the front of the stage behind his midi keyboard, somehow looking more youthful than he did in interview footage filmed about ten years ago, and said helpful things like “MY NAME IS JOHN CARPENTER”, and “I MAKE HORROR MOVIES”, to much applause.

Sadly there was no Coupe De Villes material (boo), no Benson, Arizona, and I’m not sure ‘Assault of Precinct 13’ really benefited from a full band arrangement with rock guitars, but no matter - basically it was great. Actually, truth be told, I probably would have deemed it ‘great’ even if J.C. had just pulled up a comfy chair and taken it easy for a couple of hours, such was the pleasure I felt merely being in the presence of such a beloved cultural figure (and especially given that he seemed to be having a grand old time with the whole “being a rock star” business).

By complete coincidence, the following six months have found us watching or re-watching every significant directorial assignment that Carpenter has completed since the turn of the millennium, so, what more of an excuse do I need to write a bit for you about these oft-overlooked late era additions to his formidable legacy?

Three posts will be forthcoming over the next couple of weeks, conveniently scheduled to cover a stretch of time I’m spending out of the country and away from the computer. Have fun while I’m gone...
Posted by Ben at 14:14