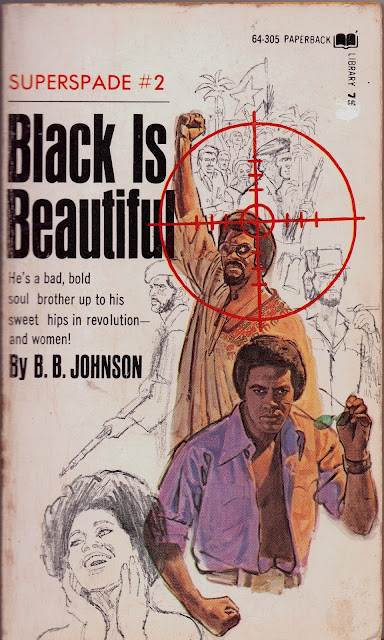 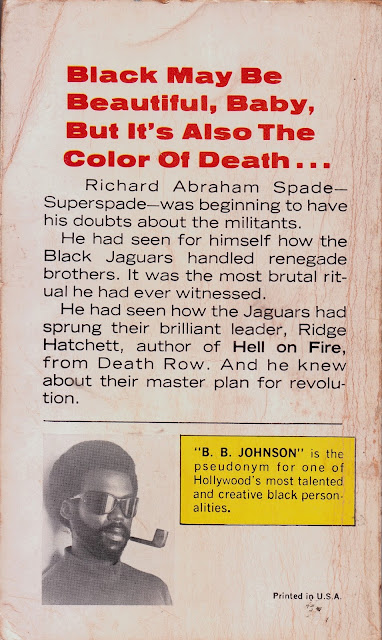 As our previous post here touched upon the sparks that flew when the aesthetic of the early ‘70s ‘black action film’ hit the literary world, I thought I might as well pull a few choice volumes off the shelf and instigate a (sadly very short) mini-series looking at what I suppose we’re contractually obliged to term “blaxploitation pulp fiction”.

First up then, we’ve got one of my favourite recent finds, and to begin with a quick note on the cover art - I wash my hands of even trying to find an art credit for this one, but I quite like the effect the artist has created by leaving most of the secondary figures as pencil sketches, just filling in (presumably) the main protagonist and antagonist.

This gives it a kind of dynamism that sets it apart from yr average example of this early ‘70s ‘action collage’ style, although whether we should treat this as the result of deliberate artistic intent or merely “we need this at the printers by Friday goddamnit, put the fucking brush down and gimme what you got so far”, I will leave to your discretion.

Moving on the the book itself, it is notable I think that it appeared in the same year that the movie version of ‘Cotton Comes To Harlem’ set about gently lampooning the Black Power movement.

The Black Panther Party, needless to say, had been big news in the U.S.A. in 1969, with the organisation’s membership reaching an all time high and Panther-related violence making waves in Chicago, New York and L.A. Bobby Seale meanwhile was under arrest charged with ordering the murder of a suspected police informant, and December saw Fred Hampton gunned down in an exchange of fire with cops in Chicago.

Clearly the editors at Paperback Library wasted no time in exploiting the publicity surrounding these events to the max, and the enigmatic B.B. Johnson knocked out no less than five ‘Superspade’ novels for them in 1970, with one further book following in ’71.

At least Davis (and Chester Himes before him) had the advantage of actually being black when they expressed such opinions however; though Paperback Library may have dug up the coolest author photo in recorded history for “B.B. Johnson”, I will eat my neckerchief if the individual behind these books was actually a gentleman of colour.

Skim reading a few chapters of ‘Black is Beautiful’ in fact, the authorial voice seems more suggestive of a middle-aged, white divorcee typewriter jockey mopping his brow with a gingham handkerchief in a back office somewhere, scouring the local black community paper to try to get the right lingo down whilst cursing his editors for not just letting him do another Bond rip-off. (The book eventually runs with the idea that the Panthers – sorry, ‘Jaguars’ – are a front for Castro’s Cuba incidentally, which puts my hypothetical author back on the more familiar ground of good ol' anti-commie paranoia.)

But, who am I to make such assumptions? Prove me wrong if you dare, and if it turns out ‘Superspade’ actually WAS a side-gig for Melvin Van Peebles or Isaac Hayes or somebody, I’ll be on neckerchief sandwiches all week.

Either way, I fear this book is no classic, but its value as a cultural artefact is mighty indeed. 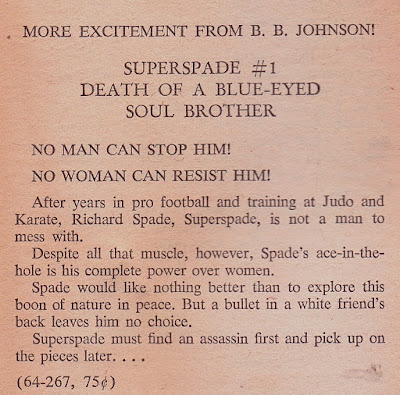 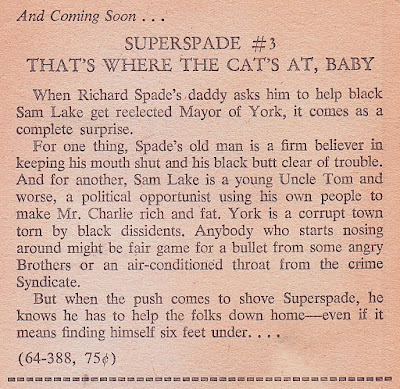 This commenter, Chris Poggiali on the Museum of Uncut Funk site http://museumofuncutfunk.com/2009/03/21/shut-ya-mout/

says Mr. Johnson is one Joe Greene, a songwriter in the 60s and screenwriter. Also, great pictures of the other covers.