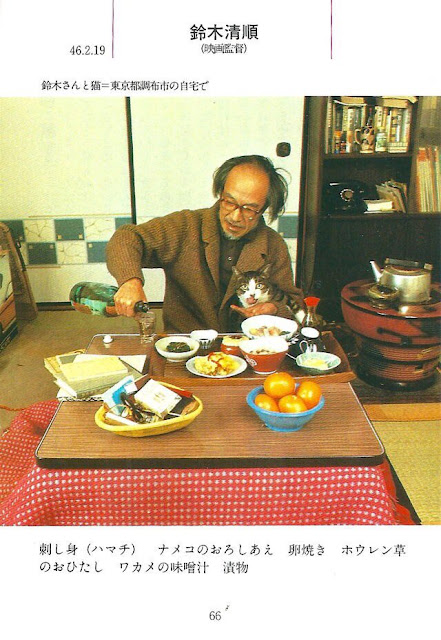 It goes without saying that I was very sad this week to hear of the death of one of my favourite Japanese filmmakers – a man whose work I believe exemplifies all the values I would wish this blog to celebrate, in fact – the great Seijun Suzuki.

Just a few weeks ago, my wife and I were discussed Seijun-san, marvelling at how old he must be. Until today I was unsure of the year of his birth, but I recall seeing interviews with him filmed fifteen years ago in which he already looked like an extremely frail, white-bearded elder; apparently though, the lovely photograph reproduced above was taken as early as 1971, so we can safely assume this was a ‘look’ the great man had been cultivating for some time. Regardless, making it to the age of ninety-three is a fine achievement (certainly by Western standards), so, although it is sad to have lost such an inspiring figure, I hope that, instead of mourning, we can celebrate a long, eventful and (here’s hoping) happy life.

Somehow, I seem to have managed to maintain this blog for over eight years without ever publishing a full length review of one of Seijun’s films (as with many of my favourite directors, his stuff can be pretty difficult to write about), so now seems as good a time as any to offer up an admittedly biased, woefully incomplete snapshot of his career, hopefully highlighting some of the things that made him such a unique voice in cinema in the process.

Most writing about Suzuki in English has tended to concentrate on the saga pertaining to ‘Branded To Kill’ (1967) and Seijun’s subsequent sacking from Nikkatsu by studio president Kyusaku Hori – a series of events that made Suzuki a cause célèbre within the emerging Japanese counter-culture and, ironically, cemented the previously humble b-movie director’s reputation as a wild and uncompromising cinematic rebel.

Whilst ‘Branded To Kill’ is undoubtedly one of Suzuki’s most remarkable films however, I’m inclined to think that the attention it has been afforded as a result of the aforementioned controversy has tended to unfairly overshadow some of the other highlights of Suzuki’s career at Nikkatsu.

Even going back to his earliest days as a director, I feel that films such as ‘Voice Without a Shadow’ (1959) and ‘Take Aim at the Police Van’ (1960) – usually dismissed as fairly unremarkable genre pictures by Western critics – reveal a sense of visual imagination and raw energy that really makes them stand out amid the era’s production line Nikkatsu thrillers, and this applies even more so to another early favourite of mine, the youth comedy ‘Fighting Delinquents’ (sometimes referred to under its splendidly translated alternative title, ‘Go To Hell, Hoodlums!’, 1960).

A zany, light-weight affair that would probably have been of little interest to international viewers in the hands of most other directors, Seijun managed to turn this production into an outrageous blast of over-saturated colour, wildly orchestrated crowd scenes, blaring dance music and absolute bloody chaos that leaves the viewer lost for words – an approach that he proceeded to carry over wholesale to the loose trilogy of extraordinary, post-modern yakuza films that really made his name, beginning with the wonderfully named ‘Detective Bureau 2-3: Go To Hell, Bastards!’ (1962) and continuing through ‘Youth of the Beast’ (1963) and, latterly, ‘Tokyo Drifter’ (1966).

In is in these films that Seijun first went completely off the leash, cracking open the uninspiring formula scripts he had been assigned to like a nut under a hammer, and dancing merrily among the pieces, pretty much defining his trademark style in the process.

In all of these films, narrative cohesion takes a definite backseat, as the director instead concentrates his efforts on crafting an eye-popping visual fantasia and a series of outrageous, anarchic set-pieces that seem designed more to deliberately distract viewers’ attention from the rote melodrama and dry exposition necessitated by the scripts than to support or enliven it. (It is this internal conflict, one suspects, that gets to the root of what bugged the studio so much about Suzuki’s films, although their alleged failure to make much money probably didn’t help matters.)

Over the course of these three films, the ‘borderless’ terrain of nightclubs, urban sprawl and scuzzy dock-side locations common to Nikkatsu productions are transformed by Suzuki into a treacherous, artificial wonderland of colour-coded villain lairs, vast, glass-floored multi-leveled dancefloors and maze-like realms of industrial detritus, full of hidden gags and false floors, disorientating back projections and phantasmagorical mood lighting.

Out on the street meanwhile, incongruously huge American cars screech around the cramped streets, their suspension bouncing under the weight of crowds of cigarette-chewing, pastel-suited hoods who, in stark contrast to the moody, lone wolf Yakuza who would take precedence in later years, seem to have burst their way straight out of a ‘30s Warner Bros gangster flick.

Hyper-stylised, knowingly ludicrous and possessed of a broadly self-parodic, often actively surrealist, sense of humour, Suzuki’s approach to (barely) orchestrating the mayhem unfolding before his cameras, and the relentless sense of forward momentum this engenders, seems entirely at odds with the exacting detail he clearly applied to crafting the more outré visual effects seen within his otherworldly set-bound landscapes, wherein the play of unnatural lighting, angular set design, glass, mirrors, disruptive framing devices and contrasting colour schemes creates a series of ever-moving visual tableaus that remain extraordinary to this day – like the expressionist agenda of classic Film Noir refracted through the lens of a candy-coated ‘Charlie & The Chocolate Factory’ nightmare.

On the basis of these films, Suzuki is often viewed, like Mario Bava in Europe, as a grand visual stylist who used his gifts merely to liven up the dull subject matter he was forced to work with, rather than as a genuine auteur, capable of infusing his work with his own personal and thematic concerns. Indeed, Seijun was always happy to play up to this reputation, claiming in interviews that his films, and the myriad eccentric gestures within them, hold no meaning and no great importance, claiming that he was just trying stuff out and having fun, with no particular aim in mind.

Whilst firstly stating that I don’t believe this admission should in any way be used as a criticism (if only more filmmakers displayed such honesty), at the same time I feel it overlooks something that plays into the very best of Suzuki’s films -- namely, how well he rose to the challenge on occasions when he actually did get a chance to engage with source material worthy of his talents.

It is easy to imagine that ‘Branded To Kill’ wouldn’t have retained a fraction of the resonance it still holds today but for the ingenious manner in which Suzuki translates the fetishized, death-trip fatalism of the script ideas provided by future avant-pinku directors Atsushi Yamatoya and Chûsei Sone to the screen, and it is was a similarly inspired fusion of the director’s style with legitimately good writing that I believe led to the creation of the film that, for me, stands as his real masterpiece – 1964’s ‘Gate of Flesh’.

Here, the essence of Taijirô Tamura’s source novel is instinctively captured by Suzuki’s bold direction, as he takes Tamura’s tale of a sisterhood of teenaged Tokyo prostitutes struggling for survival in the immediate aftermath of WWII and uses it as raw material for – if you’ll excuse the hyperbole – one of the most astonishing films I’ve seen in my life.

It is a beautiful, unflinching raw wound of a picture, in which a luridly fantastical visual aesthetic whose excesses seem to draw equally from both kabuki / ukiyo-e traditions and the sensory overload of sleaze-pulp cover illustration and German expressionism collides with a surprisingly convincing litany of social/psychological insight, exploring the uncomfortable intersections between survival, commerce, suffering, lust and love as they exist for characters struggling to define themselves in the midst of a world that is in the process of violently destroying itself and reemerging in an as-yet-unknown new form.

Though the film’s English title may sound like a crude double entendre, after viewing it gains a whole new poetic resonance; born into exploitation and struggle, the world of flesh – whether selling it, eating it, cutting it, being smothered by it – is almost literally the gate through which these women must pass in order to forge relationships with other human beings and, by extension, become fully formed human beings themselves.

Heavy stuff perhaps, but, ripped through by Suzuki with a panache that simultaneously seems to prefigure everyone from Sion Sono to Dario Argento, casually establishing the blue-print for the nascent pinky-violence sub-genre in the process, ‘Gate of Flesh’ is a singularly exhilarating experience – a fusion of pulp exploitation and rarefied, truth-speaking artistry that has rarely been equaled.

After the “years in the wilderness” that followed Suzuki’s sacking by Nikkatsu and his subsequent lawsuit for wrongful dismissal, Seijun-san made his return to filmmaking in typically idiosyncratic fashion, reuniting with Jo Shishido for a 1977 Shochiku production whose title translates as ‘A Tale of Sorrow and Sadness’. Apparently some kind of expose of corruption in the world of professional golf (a subject about which the director cheerfully admitted that both he and his cast were completely clueless), Suzuki’s Wikipedia page succinctly states that “the film was met poorly both critically and popularly”.

Following this disaster, Suzuki failed to even secure a distribution deal for his next film, the independently produced ‘Zigeunerweisen’ (1980). Not to be deterred, Suzuki and his producer actually resorted, in defiantly old school fashion, to touring Japan themselves, screening the film for people in a circus tent. In something approaching a feel-good-story-of-the-year, this venture actually proved to be a phenomenal success, and ‘Zigeunerweisen’ eventually went on to sweep the board at the Japanese Academy Awards, also picking up a prize at the Berlin Film Festival.

‘Zigeunerweisen’ also represented the first part of what is now informally known as Suzuki’s ‘Taishō trilogy’ – a series of somewhat more sober, conventionally structured films evoking the spirit of Japan’s Taishō era (1912-1926). Although they are rarely screened in the West, it is for these films – which, for the record, I have never seen - that Seijun Suzuki is most fondly remembered by the Japanese public.

Like many ‘cult directors’ buoyed up by the admiration of a new generation of fans, Seijun was back to his old tricks again in the 21st Century, with ‘Pistol Opera’ (2001) – a kind of live-action manga styled semi-sequel to ‘Branded To Kill’ - and ‘Racoon Princess’ (2005) – an utterly bizarre, family-orientated musical fantasy – both proving amazing and maddening in equal measure, frequently outstripping both their meagre budgets and their audience’s patience, but nonetheless overflowing with the kind of wild, risk-taking energy and imagination one might have expected of a director one third of Suzuki’s age.

Given that we now know they will prove his final films (despite frequent rumours of new projects during the intervening years), suffice to say that they both make exultant swan songs for a truly remarkable filmmaker – a man who, in his own easy-going, absurdist manner, was as uncompromising, ground-breaking and influential as any of the “serious” big names in world cinema – and a hell of a lot more fun than most of them besides. R.I.P. 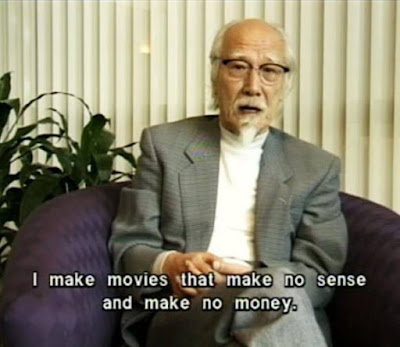 I love his films with Jo Shishido.