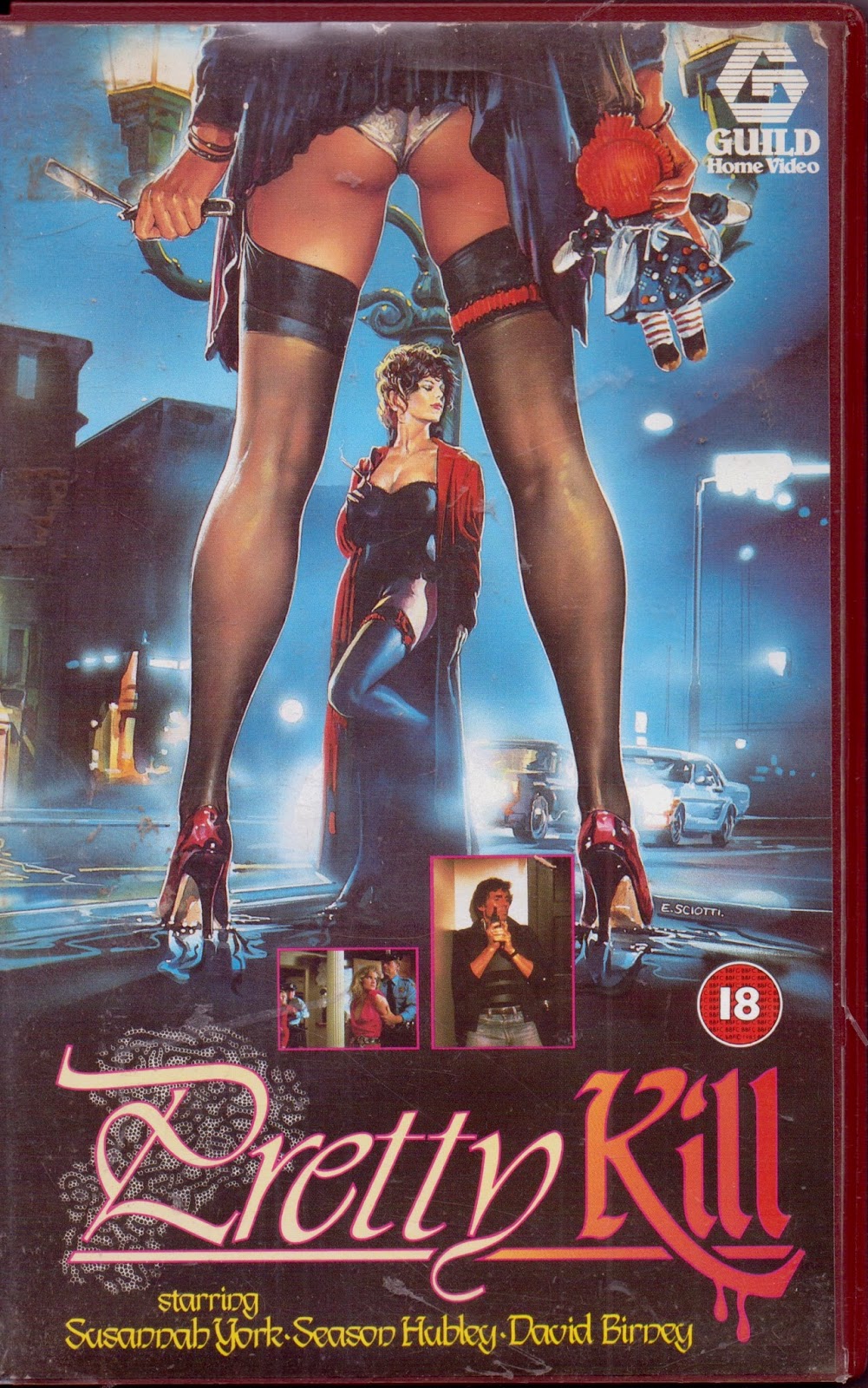 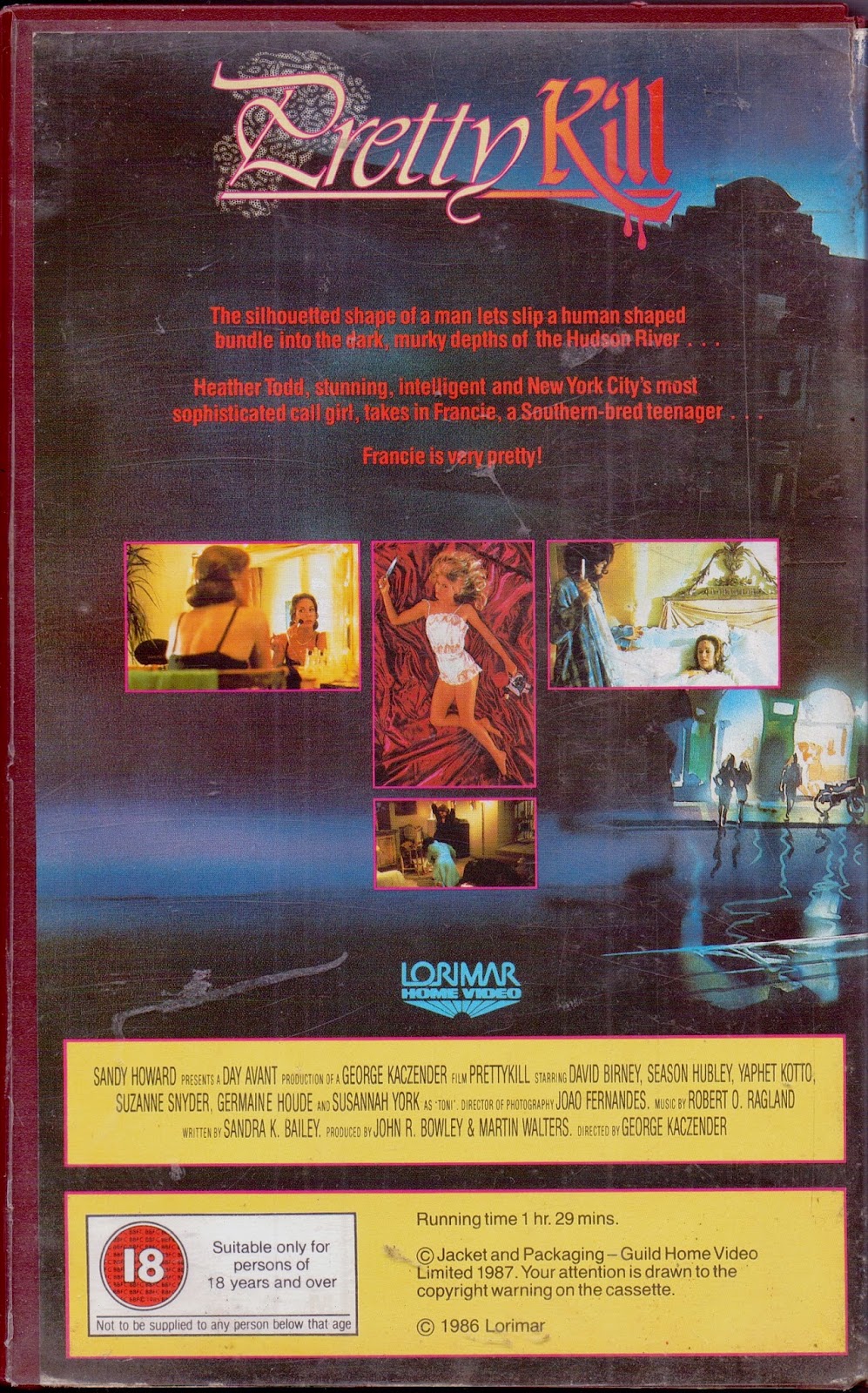 It’s been a long time since I’ve done one of these posts, isn’t it? To be honest, with my movie watching time increasingly squeezed, and discs of solid must-see titles piling up, throwing on a random “hey, no idea” tape in the ol’ VCR has become a bit of a… well, luxury doesn’t seem quite the right word, but you get my meaning.

I don’t remember where I acquired this particular tape - it must have been a charity shop find I suppose – but the deliciously sleazy artwork by definitive ‘80s poster artist Enzo Sciotti has been staring at me from the shelf for months now, and this week the time finally came for me to give it a whirl.

I’d never heard of director George Kaczender (a Hungarian filmmaker who directed his first feature in Canada in 1969, quoth IMDB), and the more-half-arsed-than-usual plot synopsis on the back doesn’t give much away either (what happened here? Looks like the copywriter got about halfway, let his pre-school daughter write a sentence and then gave up…). As such, the only thing I had to go on prior to watching was the cast – Susannah York, clearly bumped up from cameo to top-billing to capitalize on her name value vis-à-vis this British edition, Season Hubley (who was good in Paul Schrader’s ‘Hardcore’), and Baron Greenback himself, the great Yaphet Kotto.

So. Turns out ‘Pretty Kill’ (which got a theatrical release in the US under the name ‘Tomorrow’s a Killer’) is a thoroughly mediocre Reagan-era New York cop / psychopath thriller, with a milieu that sometimes recalls that frequented by great NYC genre directors like Larry Cohen, Abel Ferrara and Bill Lustig, but is crucially lacking in the grit, talent and vision that went toward making them such.

Swinging unevenly between over-scored melodrama and sub-Friedkin faux-documentary mumbling during it’s first half, but the pace is sluggish, the direction strictly pedestrian, and the story rendered along lines flat, clichéd and emotionally manipulative. Even the obligatory 42nd street / strip club / sex party interludes seem bland and anemic, and the attempts to portray underworld / drug situations are laughably unconvincing. Not a *terrible* movie by any means, but something of a snooze, you might say.

Basically, the best stuff here comes from the cast. Though as suspected her role is very small, York is good value here, and Hubley is solid too as the kind of “professional high class hooker” character that only exists in ‘80s movies. David Birney is a very likable presence as our heroic-cop-on-the-edge male lead, with a kind of “Harry Dean Stanton’s wide-eyed younger brother” vibe to him. I feel he could have done good work injecting a bit of thespian muscle into in these kind of generic crime / action roles, but presumably the world at large disagreed, as just about everything else on his IMDB CV is prefaced with the dreaded “TV” brackets.

Always a joy to see Kotto too of course. Initially I feared he was going to be wasted here playing the obligatory “by-the-book superior officer” antagonist to Birney’s bush league Dirty Harry, but he actually twists the formulaic role in rather a winningly cool direction, oozing soft-spoken menace and somehow managing to convey the impression that he’s just as much of a threat to public decency as the movie’s low-life criminals, not as a result of any particular actions or story points, but just through the sheer force of his creepy demeanor and intimidating physical presence. The scene in which he unexpectedly appears in a zipped up leather jacket to whisper veiled threats at Birney during an after-work drinking session was the highlight of the movie as far as I’m concerned.

At the other end of the scale however, actress Suzanne Snyder, who plays the pivotal character of Francie, is simply atrocious. Her “taking pre-planned deep breaths and staring straight at camera” performance is pretty hard to take even when she’s playing a wholly one dimensional character in the film’s first half, but when the story opens out into a DePalma-esque psychodrama in the second half, requiring her to essay a chameleonic, split personality psychopath, her poor acting simply renders the whole thing comical, pushing ‘Pretty Kill’ beyond mere blandness and into the realm of being an actual living, breathing *terrible movie*.

Admittedly, this isn’t entirely Snyder’s fault – the script’s treatment of her character’s mental illness and childhood abuse-induced dysfunction is ham-fisted in the extreme, and the scenes in which she goes through the whole ‘regressing back to childhood’ breakdown routine – inexplicably clutching a corn dolly, imitating her father’s voice etc – are painful to sit through; an absolute embarrassment to all concerned, even if we write off any serious intent and just take the movie as a pure exploitation flick.

Speaking of which, ‘Pretty Kill’s finale does at least attain a certain degree of low level camp/trash excelsis, as Snyder, now in full scenery-chewing psycho mode, takes on Hubley in a bloody corkscrew / straight razor battle that plays like a TV sketch show parody of a DePalma set-piece. Nothing to write home about, but it was utterly ridiculous and moderately entertaining.

Also, the “story of a psycho” style synth-pop ballad that plays over the end credits is just unspeakably bad. Did Snyder sing it, whilst ‘in character’? I didn’t hang around to check, but I wouldn’t be surprised. A staggeringly misguided inclusion, either way. It pains me to rag on someone like this in a review, so I'll wrap this up now and sincerely hope that Snyder put this farrago behind her and went on to better things. (To my surprise, a quick IMDB check reveals that she actually racked up a pretty solid CV of smaller roles in ‘80s ‘cult’ fare, with appearances in ‘Weird Science’, ‘Night of the Creeps’ and ‘The Last Starfighter’ amongst others.)

Despite its myriad faults, ‘Pretty Kill’ nonetheless has a certain charm to it on a “turn off your mind and float downstream” level – perfect, mind-numbing late night TV comfort viewing that has a palpable nostalgic pull to it if yr in the mood for this sort of thing... a feeling that is only enhanced by the exquisitely degraded VHS form in which I watched it here.

Picture was nicely colour-drained and fuzzy throughout, but playback was smooth and consistent, suggesting this tape has been well cared for since 1987. Before the film, we got a lovely Guild Video ident, and trailers for ‘War Zone’ (Christopher Walken and David Hemmings in war-torn Beirut!), ‘Take It Easy’ (post-Flashdance synth-rock / acrobatics opus?!), ‘Duet For One’ (jaw-droppingly crass, based-on-a-true-story Cannon Films Oscar-bait) and ‘Witchboard’ (you know it) – all very much worth looking up on Youtube if you’ve got the time.

A full scan of Sciotti’s wraparound cover art is provided for your viewing pleasure below. 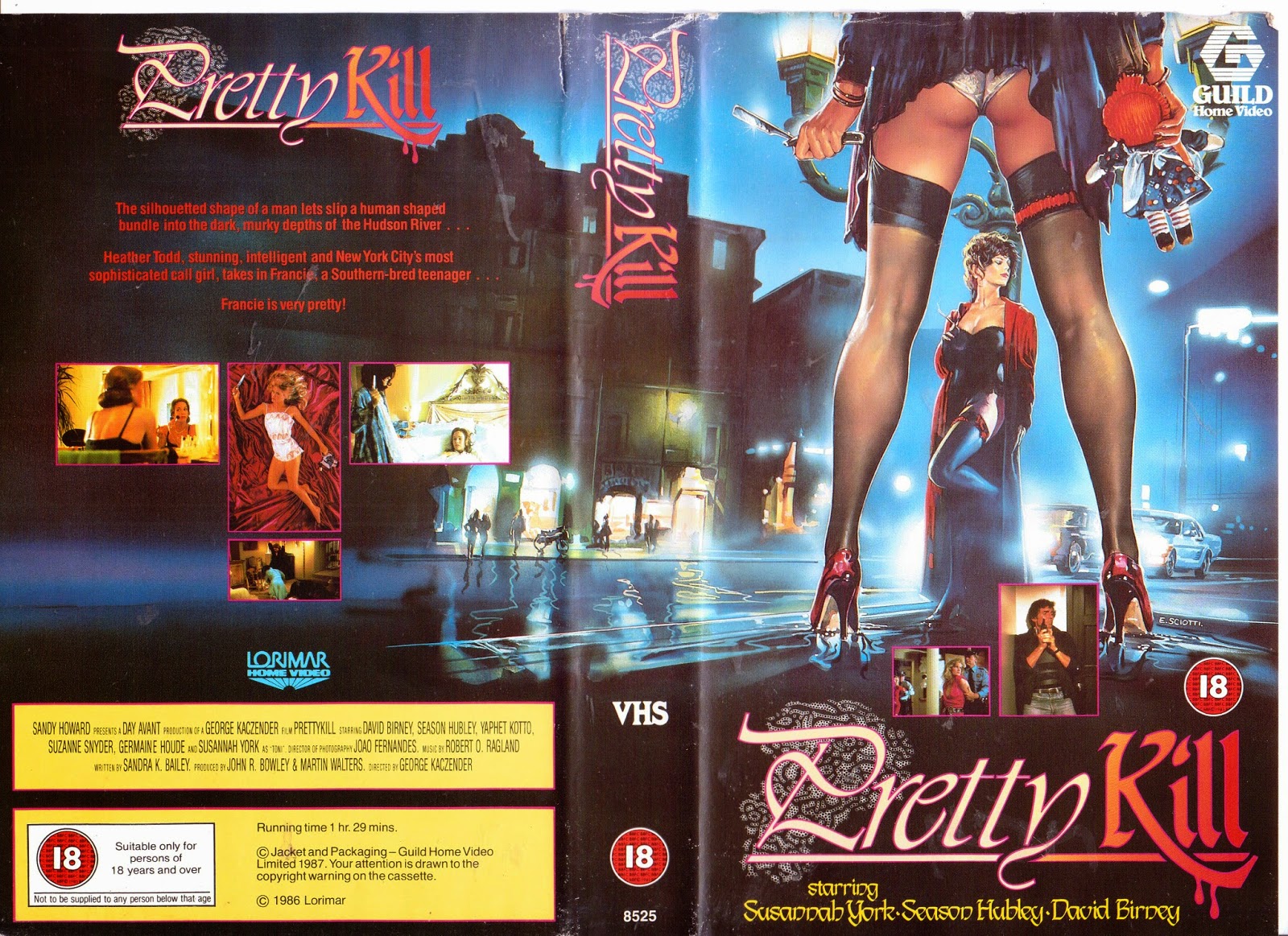