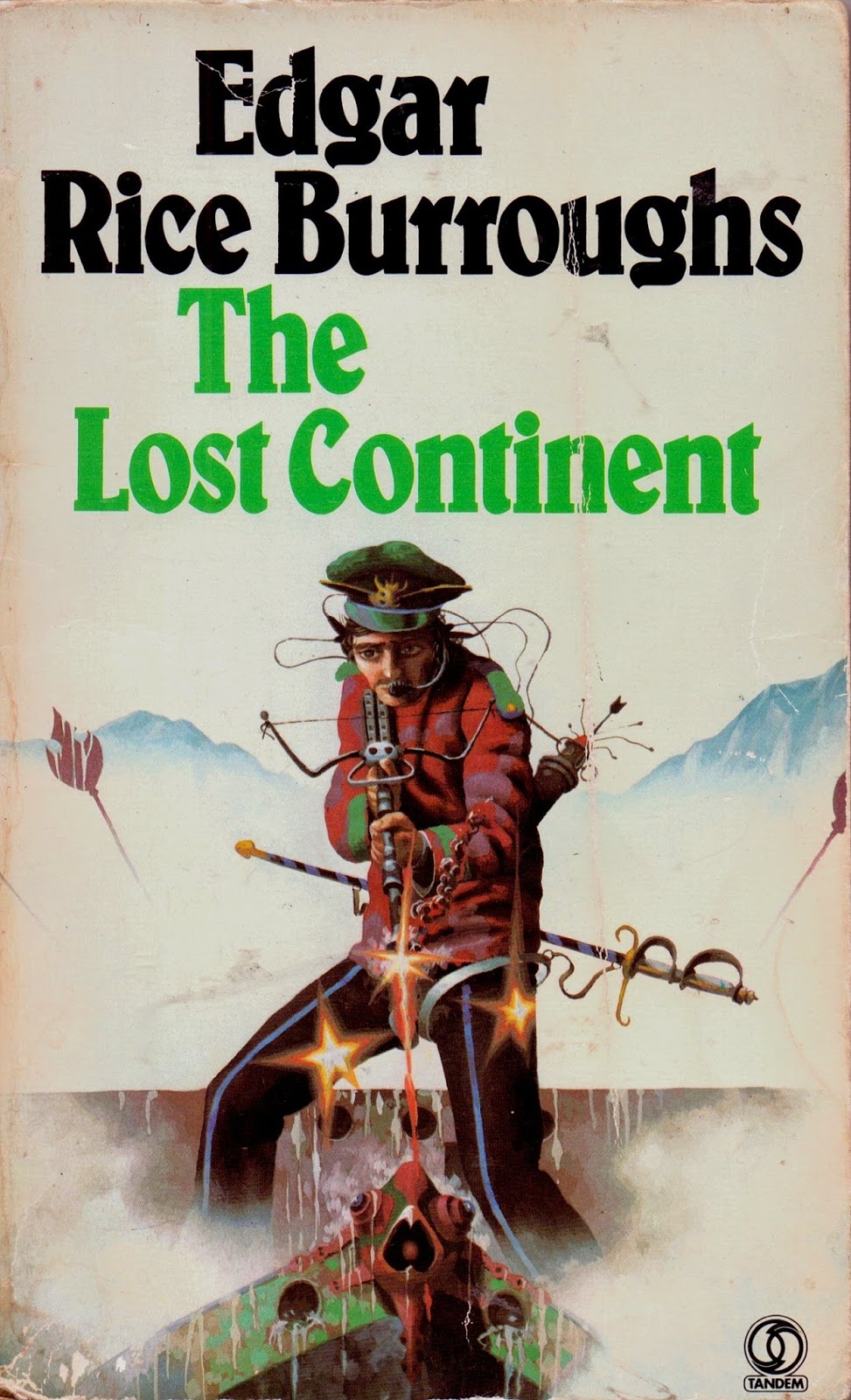 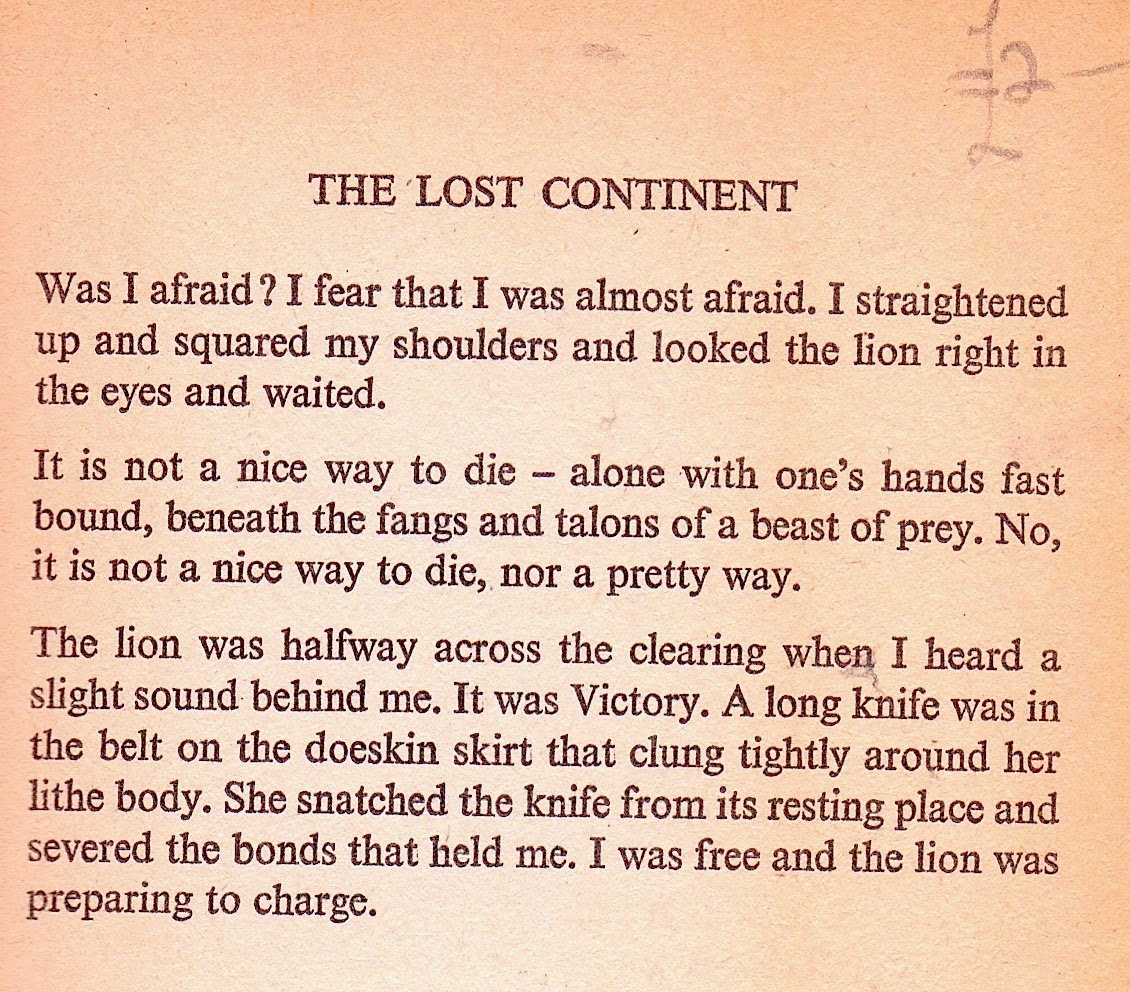 After posting the covers of some Edgar Rice Burroughs paperbacks a few months ago, I promised myself I’d finally give some of his writing a try, and, well, here we go.

Moreso than a Tarzan jungle adventure or Martian daring-do with John Carter, this curious little volume seemed a good entry point. (Nifty cover art too – sort of psychedelic/abstracty yet peculiarly specific and detailed at the same time… sure I recognize the style, but my mind is sieve-like as usual and I can’t put a name to the uncredited artist.. any ideas?)

Anyway: published just prior to the USA’s entry into the First World War, ‘The Lost Continent’ posits a 22nd Century future wherein the continent of America, combined into a single confederacy, has thrived in utopian fashion for over two centuries whilst maintaining a policy of strict isolationism from the rest of the world.

The Americans, we infer, more or less washed their hands of an increasingly war-torn Europe at some point during the 20th century, and henceforth, knowledge and discussion of the world beyond America was actively discouraged, whilst Pan-American ships continue to patrol the 30th and 175th meridians on each side of the continent, ensuring that nothing crosses in either direction. (This is the origin of the novella’s original title, “Beyond Thirty”, wisely dropped here lest anyone think ERB had turned out some introspective work of pre-middle age ennui.)

It is on-board one of these patrol vessels that we meet Lieutenant Jefferson Turck, a hero in what I assume to be the classic Burroughs mold, his achievements exaggerated to the extent that he quite possibly makes Tarzan look like a wuss. Though only twenty one years of age, Turck tells us in his first person narration, he has made love to innumerable women of a wide range of age groups and social classes, has successfully fought numerous duels, and has risen to the rank of Lieutenant in the proud Pan-American navy, gaining him sole command of a mighty Aero-submarine.

Winding down after presumably spending the day cracking granite blocks with his chin, Lieutenant Turck is also quite the scholar, and in particular has spent a great deal of time covertly studying the forbidden, ancient texts of Old Europe, giving him a persistent fascination with the world that lies “beyond 30”, and a burning curiosity about what may have become of it since America severed contact.

As readers might well have anticipated, a series of unfortunate events soon see Turck and a few of his men stranded on the wrong side of the dreaded 30th in a small motor launch, and, with no hope of making it back to American shores before fuel and provisions run out, the captain, natural leader that he is, takes the bold decision to continue Eastwards towards the British Isles, making he and his comrades the first Americans in over two centuries to set foot on those hallowed shores.

Much to our hero’s disappointment however, very little remains of the grand empire he has read about. England itself is little more than an overgrown wilderness with all traces of civilization apparently obliterated. This savage wasteland is populated, somewhat improbably, by ravenous hordes of lions, tigers and elephants (the descendants of zoo escapees, we’re told), with its human inhabitants limited to just a few scattered groups of stone-age primitives (who helpfully speak English, and have names like “Buckingham” and “Johnson”).

Clearly a man who likes to get things done, barely a chapter has passed before Turck has blasted his way through hordes of the local wildlife, floor-punched a few cavemen and hooked up with ‘Victory’ (wink wink), the beautiful, fur-clad teenage princess of what remains of the once proud nation of “Gerbriton”.

It is in her company that Turck finds himself navigating the lion-infested ruins of London’s South Bank, where the pair explore the remains of what was once a grand royal palace. I'm not quite sure where this might have been, as the action is still definitely South of the river at that point (maybe Burroughs’ grasp of London geography wasn’t all that?), but nonetheless, it is here that our hero finally gets an insight into the horrors that transpired in the decades after America turned its back.

“Beneath the desk were a pair of spurred military boots, green and rotten with decay. In them were the leg bones of a man. Among the tiny bones of the hands was an ancient fountain pen, as good, apparently, as the day it was made, and a metal covered memoranda book, closed over the bones of an index finger. It was a gruesome sight – a pitiful sight – this lone inhabitant of mighty London.

Only here and there was a sentence or part of a sentence legible. The first that I could read was near the middle of the little volume:

‘His Majesty left for Tundridge Wells today, he… jesty was stricken… terday. God give she does not die… am military governor of Lon…’
And further on:
‘It is awful… hundred deaths today… worse than the bombardm…’
[…]
‘Thank god we drove them out. There is not a single… man on British soil today; but at what awful cost. I tried to persuade Sir Philip to urge the people to remain. But they are mad with fear of the Death, and rage at our enemies. He tells me that the coast cities are packed… waiting to be taken across.”

And the last entry:
‘…. Alone. Only the wild beasts… A lion is roaring now beneath the palace windows. They say the people feared the beasts even more than they did the Death. But they are gone, all gone, and to what? How much better conditions will they find on the continent? All gone – only I remain. I promised his Majesty, and when he returns he will find that I was true to my trust, for I shall be awaiting him. God save the King!’

Some of the entries had been dated. From the few legible letters and figures which remained I judge the end came some time in 1937, but of that I am not at all certain.”

With Victory in tow, Turck and his men make it as far as Germany without encountering anyone remotely civilised, at which point they find themselves falling into the hands of an advance party from the Abyssinian Empire, a black super-state who, having solidified their command of Africa and the Middle East, are starting to have a bash at repopulating Europe too.

Refreshingly, the appearance of this black empire in the story doesn’t prompt quite as much out-right racism as you might have expected from WW1-era pulp, even if the standard eugenic fallacies of the era are still in full effect. Though they are eventually revealed as a bit of a barbarous rabble in comparison to the book’s other global superpowers, Burroughs does at least find time to credit the higher ranks of African society with at least some level of intelligence and ‘nobility’, whilst the scenes depicting whites being enslaved and generally belittled by their black ‘superiors’ tend to read more as a “flip the script” condemnation of contemporary racism than as a nightmare offered up to the (presumably white) readership.

All this is pushed into the background however at the book’s conclusion, when the Abyssinians’ European capital on the site of the former Berlin is violently overrun by their main competitor in the Eastern hemisphere – the fearsome Pan-Asian coalition overseen by the Emperor of China. Oh dear.

Well, thankfully, ERB seems pretty chilled out with the notion of a Far Eastern military empire too, despite this being the era of Sax Rohmer and the “yellow peril”, and it turns out that these the Asians, brutal suppression of the Africans notwithstanding, are the height of politeness, and treat Turck splendidly, acknowledging his position as a dignitary of a distant kingdom and treating him and his barbarian bride to an all-expenses paid tour of their happy and enlightened empire before arranging to send him home across the Pacific. So there ya go – a happy ending to a rip-roaring, all-action pulp rollercoaster of wanton brutality, barely suppressed eroticism, universal heroism and speculative genocide, all delivered by Burroughs in fast-paced, no nonsense fashion – a writing style as blunt and reliable as a Victorian train schedule.

Although numerous films named ‘The Lost Continent’ have appeared over the years, none of them have actually been based on this story, which to my knowledge has never been adapted for the screen at all - perhaps understandable given a) the kind of budget necessary to realise Burroughs’ vision, b) the story’s historical irrelevancy post-1917, and c) the fact that the hero spends much of his time shooting endangered species in the face.

Regarding point b), as is usually the case with science fiction of a certain age, ‘The Lost Continent’ tells us more about the time in which it was written than anything else, with the thinking that led to its now utterly fantastical prediction for the future anchoring it squarely within the brief window between the outbreak of WW1 in Europe and the USA’s decision to join the conflict in April 1917.

To modern readers, ERB’s take on things will seem odd and rather hypocritical – numerous allusions in the text make it clear that the author must have been deeply horrified by reports of trench warfare in Europe, yet he still seems keen to judge the merits of a civilization by the size and prowess of its armies, and seems happy to leave us with a conclusion in which the Earth is equally divided between two vast and apparently benevolent military powers (the question of how long they’ll be able to co-exist in harmony is never raised).

Clearly the overriding “war to end all wars” mentality and the humbling of Europe’s empires that followed 1918 had not yet taken hold when Burroughs was writing, and as an example of an everyday (non-academic/philosophical) voice struggling to find a way to square up the terrible events of 1914-16 with an ingrained faith in the sureties of 19th century imperialism, the rather conflicted point of view expressed through ‘The Lost Continent’ is quite fascinating.

A bit of a weird historical cul de sac admittedly, and one that was rendered wholly irrelevant mere months after ‘Beyond Thirty’ was published in magazine form (perhaps accounting for the story’s swift disappearance and relatively low profile within the ERB canon), but - interesting nonetheless, and maybe even slightly poignant too; there is a shaky thread of humanitarianism and fear for the future here that endures despite the story’s super-charged pulp bluster. 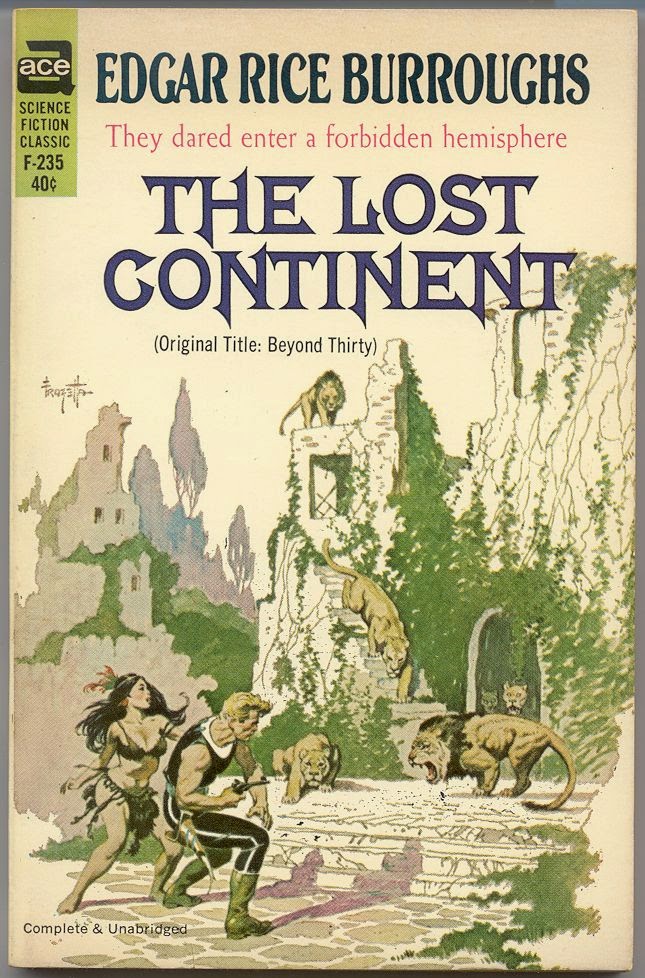 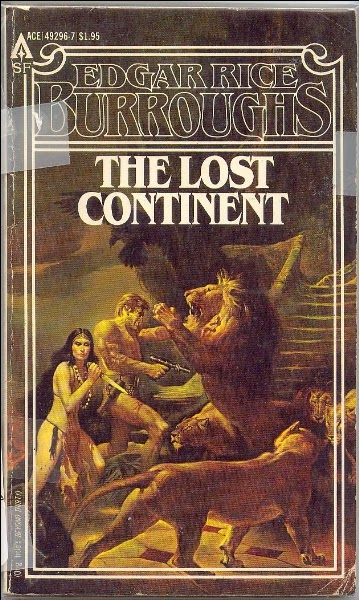 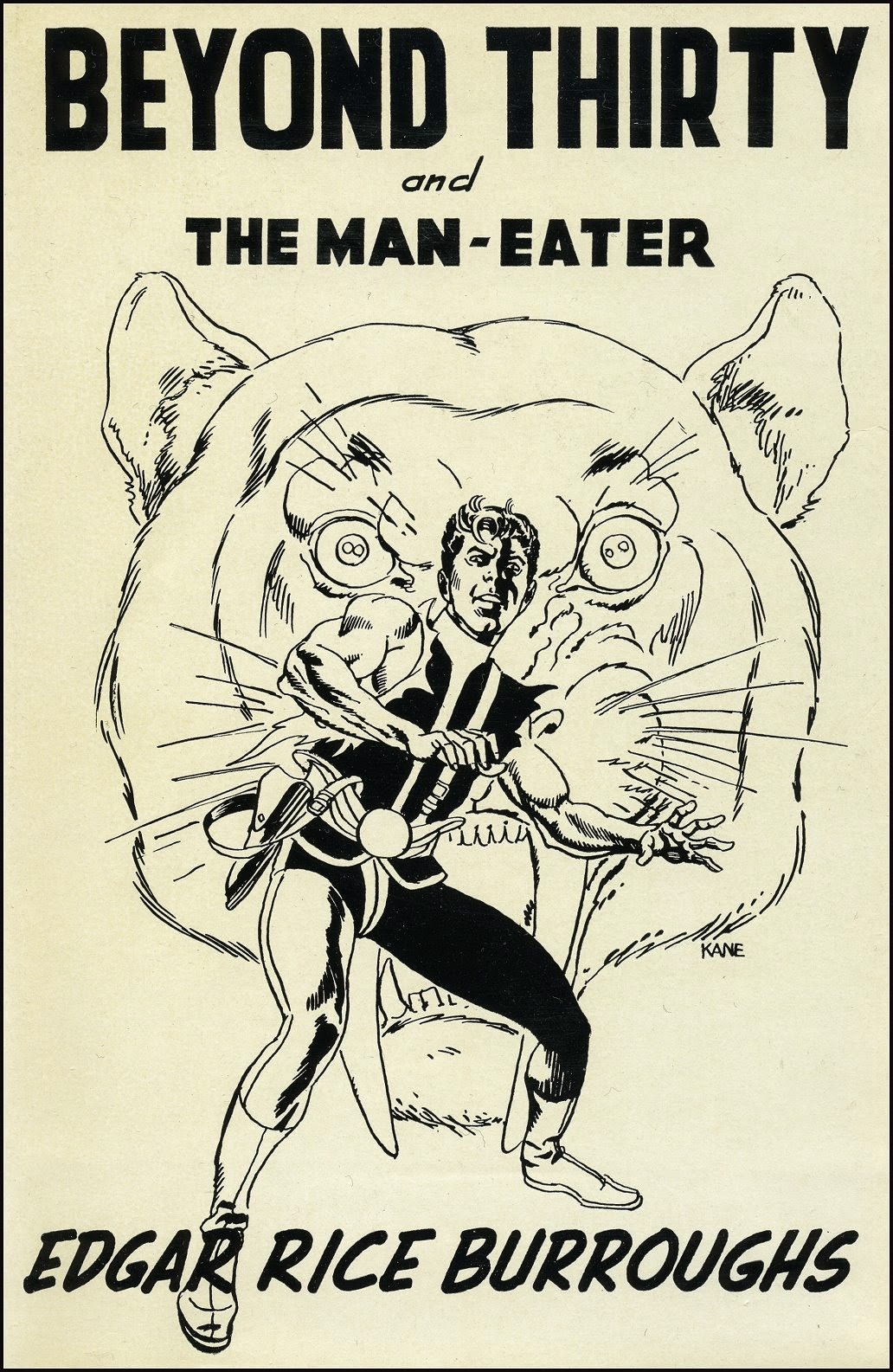 And the ‘worst cover’ award goes to... 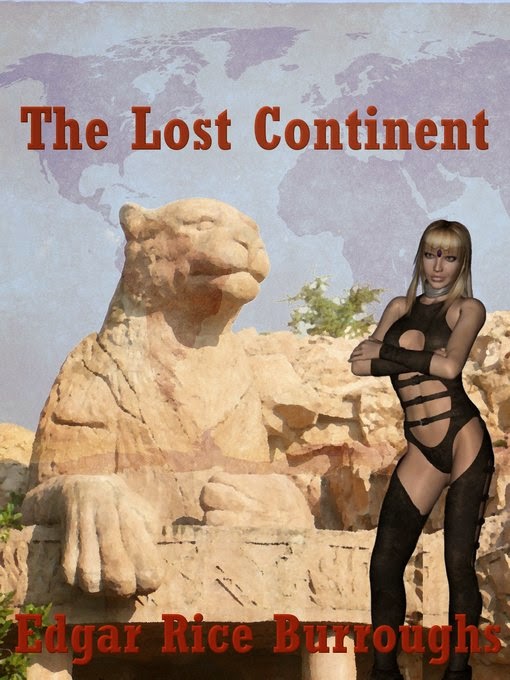 File just above Tutis in the "conscious thought but just barely" category.