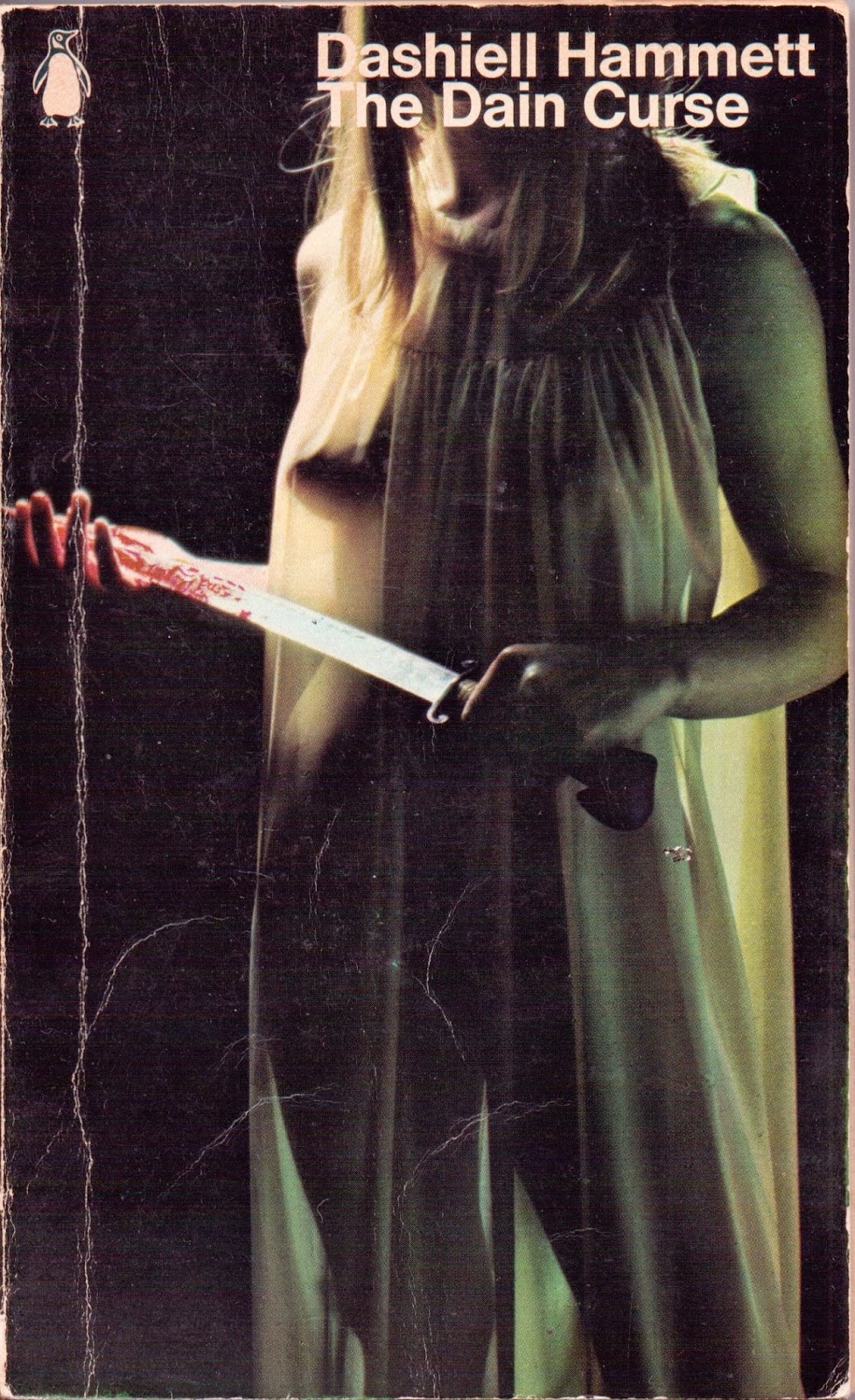 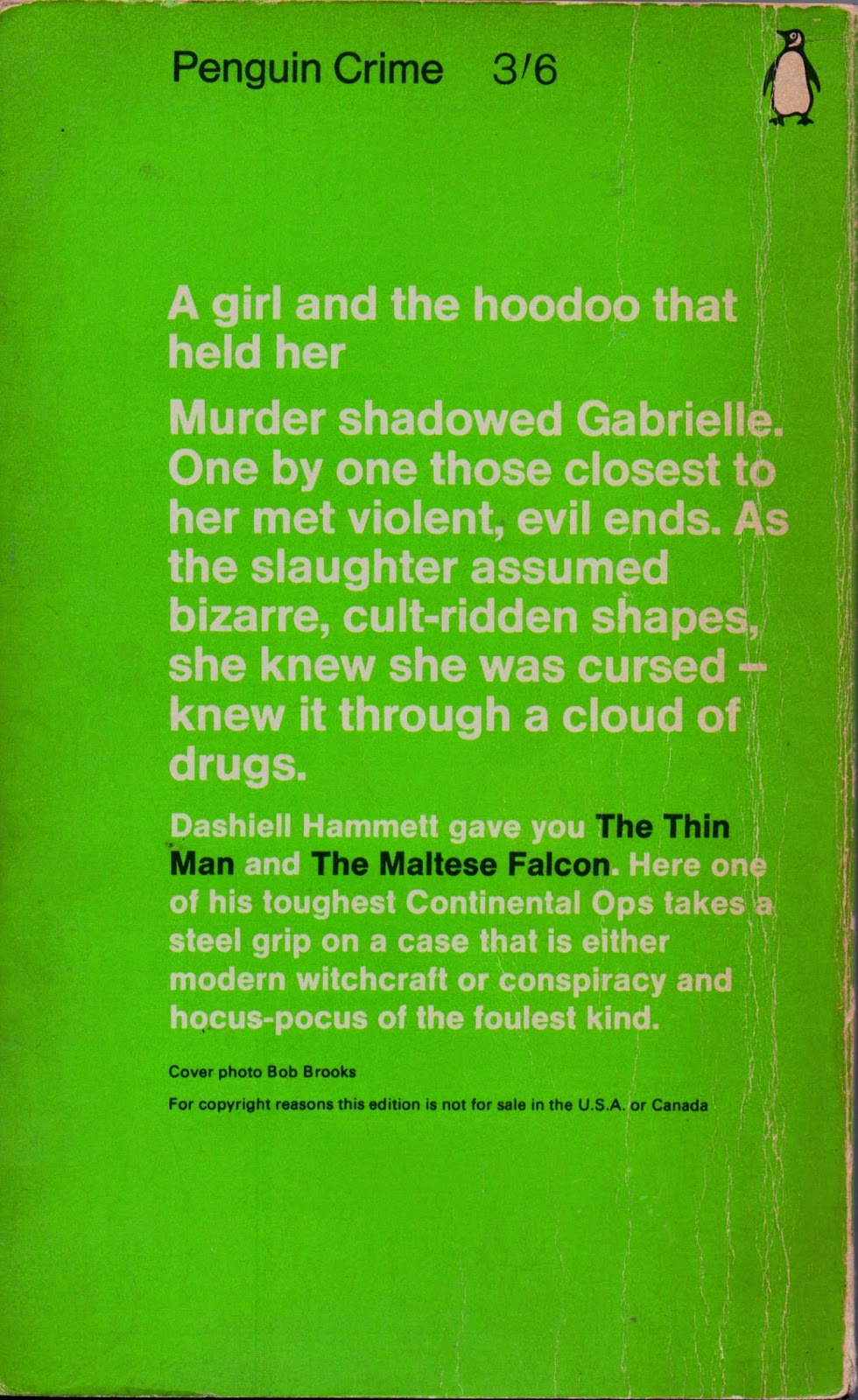 In general, I feel that the design policy on Penguin Crime paperbacks became far less aesthetically interesting when they began moving toward photo covers from the mid ‘60s onwards. Anyone who has spent time pulling green spines off shelves in British bookshops over the years will no doubt be familiar with those woeful ‘70s editions that just feature ‘still life’ arrangements of handguns, wedding rings, wrist watches and so on posed on somebody’s bedside table.

(Just personal preference I suppose, but god, I hate those covers so much - just looking at them makes me drift into a state of utter boredom, despairing at the tiresome litany of stock detective story props. Such a total contrast to the thrill and mystery generated by the earlier, more modernist / abstract artwork covers I’ve previously shared on this blog…)

Before that nadir though, some of the earlier forerunners of the photo cover were extremely good. William Haggard’s Slow Burner is one of my all-time favourites, and I’ll also make an exception for this startlingly lurid presentation of Dashiell Hammett’s ‘The Dain Curse’, wherein Penguin quite uncharacteristically seem to be going all out to sell it as a horror story, complete with bloody knife, thinly veiled boobs and the kind of frothing-at-the-mouth back cover copy you’d be more likely to find on a New English Library horror cheapie from a decade later.

For whatever reason, I skipped over ‘The Dain Curse’ when I made my way through Hammett’s novels in my youth, so when I picked up this edition and learned that it allegedly features the father of hard-boiled fiction mixing up “slaughter” and “hoodoo” in “bizarre, cult-riddled shapes”, I had no choice but to drop everything and read it straight away. Mission accomplished for the ’66 Penguin design team then, And I mean, even if the promises of the cover turn out to be complete hooey, Hammett is always worth reading, right?

And, well… what a peculiar book this is. I was unaware of its episodic publication history when I began reading, so I’ll admit that it came as something of a surprise when the story boiled over into a blood-curdling melodramatic conclusion on about page 45, then promptly started again from scratch in the next chapter following a dry, expositional wrap-up. After this, it swiftly became obvious that, though presented as a continuous novel, ‘The Dain Curse’ actually consists of a number of interlinked short stories, following the same group of core characters through a series of black-hearted capers and genre exercises, with the bad-ass first person narration of Hammett’s nameless Continental Op character holding things together whenever the inter-story continuity gets a bit frayed around the edges (because when that guy tells you what’s what, you tend to believe him, if you want your jaw to remain intact).

Thus, it proves no surprise therefore to discover that ‘The Dain Curse’ was originally published in four monthly instalments in Black Mask magazine, from November 1928 to February 1929. The earlier ‘Red Harvest’ was also published this way of course, but whereas that story functioned well as a self-contained novel (insofar as I remember anyway – it’s been a while since I read it), the connecting tissue linking the stories in ‘The Dain Curse’ is much sketchier, leading to a rather rambling, uneven feel, with a pulpier tone than that found in Hammett’s other full length works.

Heading straight for the index in my long unread copy of Diane Johnson’s ‘The Life of Dashiell Hammett’ (Hogarth Press, 1984), I learn that Hammett himself didn’t seem to hold a high opinion of ‘The Dain Curse’, later describing it as his “silly story”, and losing interest in it almost immediately when he began working concurrently on what became ‘The Maltese Falcon’. It also seems that the book only saw print as a stand-alone volume after editor Harry C. Block had repeatedly pleaded with Hammett to further revise his manuscript, politely presenting the author with a list of ‘recommendations’ that included increasing coherence between the different episodes, eliminating minor characters and digressions entirely and significantly reworking the character of the heroine. To be honest, all of these issues remain pretty problematic in the version that was eventually published, so god knows what kind of a mess things must have been in when Hammett initially submitted his manuscript three revisions earlier.

This all goes some way toward explaining why ‘The Dain Curse’ is by far the least celebrated and least widely read of Hammett’s five novels, I suppose, but it also goes without saying that the book’s awkward narrative flow, which renders it quite hap-hazard and unsatisfying as a detective story, still allows for frequent outbursts of exceptional writing and sheer strangeness that led me to enjoy it quite a bit.

Predictably enough, my favourite part of the book was the second quarter, originally published in Black Mask in December 1928 as ‘The Hollow Temple’. To my surprise, this segment, which seems to have inspired the entirety of Penguin’s design for the book, does indeed see Hammett taking a detour into full-blown horror territory, delivering on the promise of the back cover copy in spades (if only for the space of twenty-something pages).

So, simply put, pages 63 to 98 of ‘The Dain Curse’ represent the most awe-inspiring chunk of weird/pulp prose I’ve read in years, incorporating a reclusive religious cult who pump narcotics through the air-con in their guests’ rooms, secret passages and encounters in the darkness with both sap-wielding thugs and terrifying spectres, a bullet-proof Satanic messiah presiding over a sacrificial altar, and yes, a hypnotised, bloody knife-cradling heroine in a diaphanous nightgown.

Despite the more esoteric subject matter, Hammett’s prose is, as ever, full-blooded and razor-sharp (more literally so here than usual), and the fact that he suddenly begins ploughing through all this in the midst of what is ostensibly a detective story makes it all the more remarkable and unexpected. The passage in which the Continental Op finds himself apparently wrestling with an amorphous, shape-shifting ghost, taking chunks out of the fucker ‘til it *bleeds*, is absolutely staggering – as perfect a realisation of somebody’s “hey, imagine if Dashiell Hammett wrote for ‘Weird Tales’” daydream as could be wished for, rendered with a James/Blackwood-esque descriptive power that no amount of “it was all just knock-out drops and a light show” back-pedalling can sufficiently account for.

It is intriguing to realise that Hammett was clearly an admirer of the genre he is wading into here – he even throws in a cheeky name-check for Arthur Machen - and not even ‘The Hollow Temple’s concluding chapter, in which the rational explanation for everything that transpired is rather awkwardly and tediously outlined, can dampen the memory of the blood-splattered, opium-frazzled power of these pages.

Whilst I’ve always been a fan of Hammett’s work, not to mention the brave stands he took on his beliefs in later life, discovering this full strength detour into weirdsville increases my admiration for him even further. So if, like me, you’ve previously skipped ‘The Dain Curse’ on the basis that it sounds like some kind of fuddy-duddy missing jewels stately home whodunit that nobody seems to rate as much as his other books, now might be as good a time as any to correct that omission, especially if you can track it down with one of the numerous great covers it has inspired over the years.

To that end, let’s conclude with a few I grabbed off the internet; apologies for the low res of some of the images – apparently the standing of this novel remains so low that no one has even much bothered with any decent cover scans. (And yes, James Coburn played the Op in a 1978 TV version – good casting.) 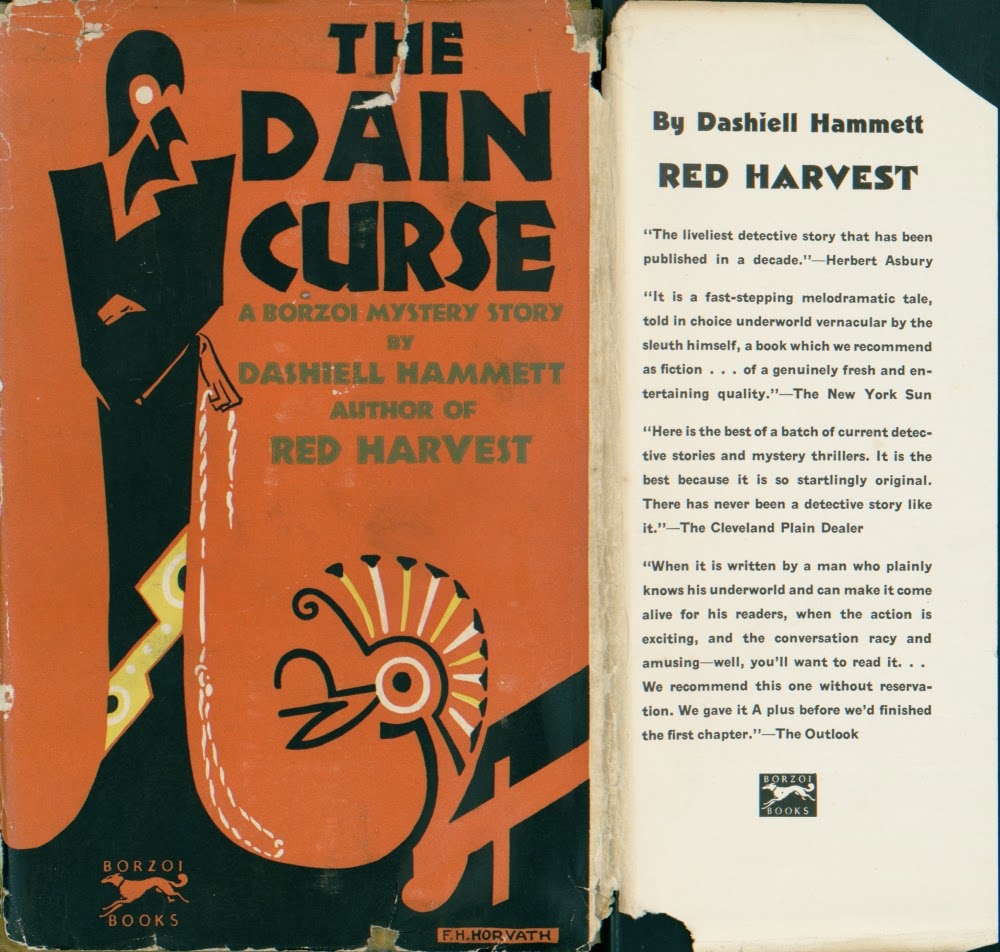 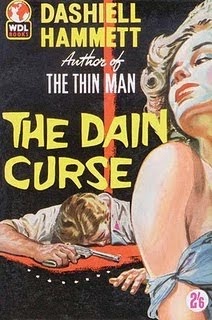 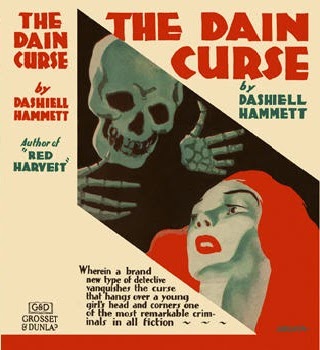 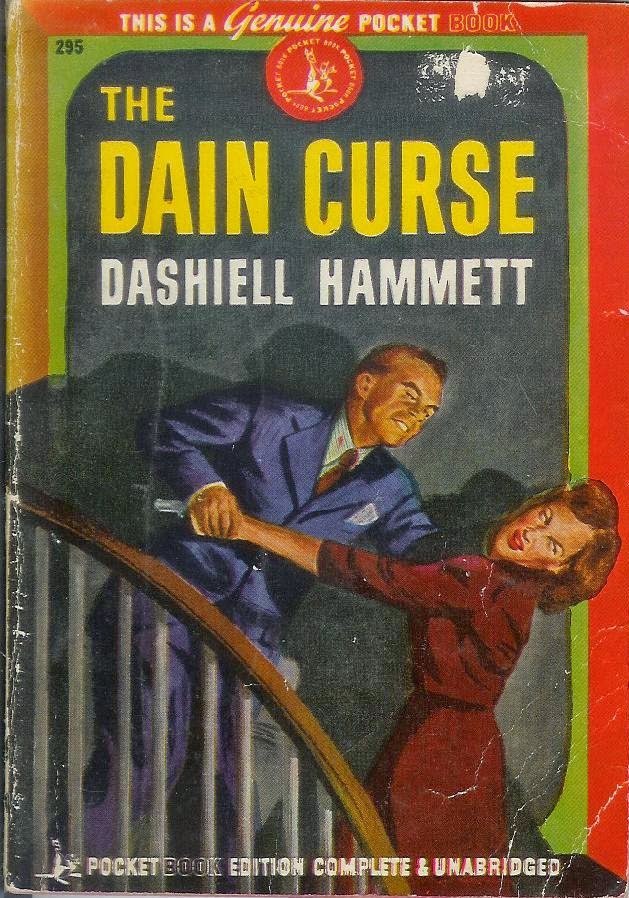 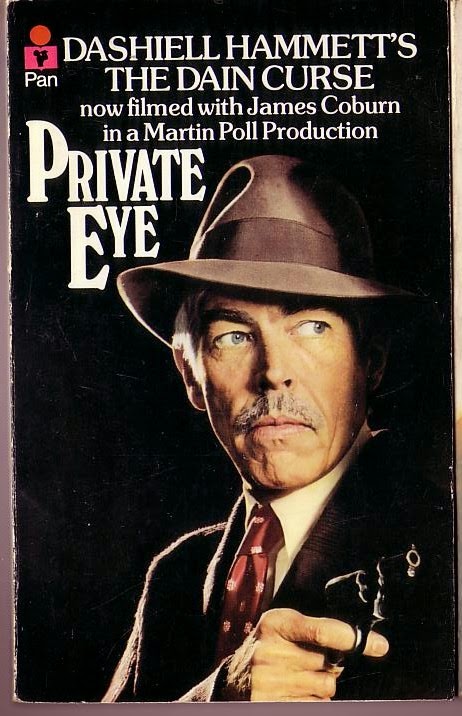 1: Do you love musty old 1970s NEL bovverbikes'n'sexploitation paperbacks?
2: Have you ever wondered what they'd sound like as faked Radio 4 episodes, each lovingly narrated to an authentic, period-musical soundtrack. With sound effects?
3: Would you mind if I - just this once - shamelessly link-whored to my own product via your website?