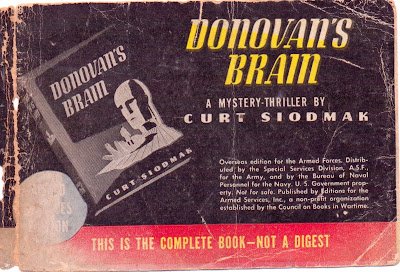 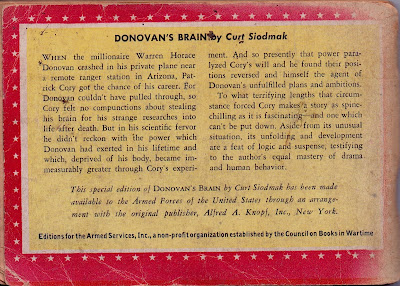 So this is one of the more unusual items of acquired of recent. A miniature, pocket-sized US Services edition of Curt Siodmak’s brain-swap sci-fi epic ‘Donovan’s Brain’.

As you might expect, the paper this thing is printed on is veeery low grade - both covers are loose, and the pages feel like they’re practically falling apart in by hands. None of the usual copyright info, ISBN / Library of Congress numbers or year of publication info are present. Because, y’know, the army got better things to do than worry about that kinda shit.

Given that I’m primarily familiar with Curt Siodmak via his voluminous work as a screenwriter for ‘30s and ‘40s American horror films, I’d assumed that ‘Donovan’s Brain’ must be a novelisation (presumably based on his own screenplay) of the 1953 b-movie classic of the same name, directed by Felix E. Feist. My usual exhaustive research however reveals that Siodmak actually had no direct connection to that film. ‘Donovan’s Brain’ was an original novel, first published in 1942 and previously filmed as a Republic Pictures quickie entitled ‘The Lady and the Monster’ in 1944.

Despite having greatly admired a number of the films Siodmak worked on (every horror fan owes him a few moments of worship I think for his scripts for ‘The Wolfman’ and ‘I Walked With a Zombie’), I’ve never read anything by him in prose-form. The opening page here though makes me think that I’d very much like to try, but for the fact that this particular copy is on the verge of disintegrating; 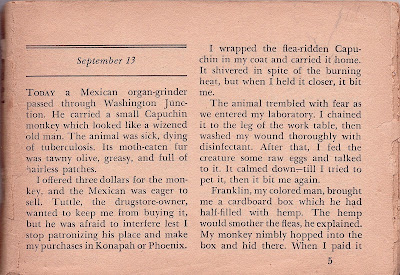 Oh, and as an added point of interest, check out the selection of literature available from Editions for Armed Services Inc. during whatever period this book dates from. (WWII? Korea? – who knows). A varied library, to say the least. 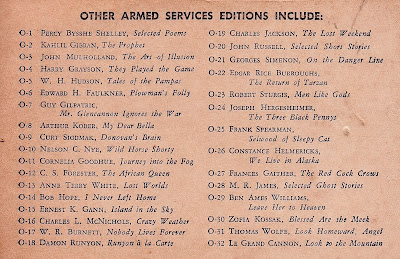