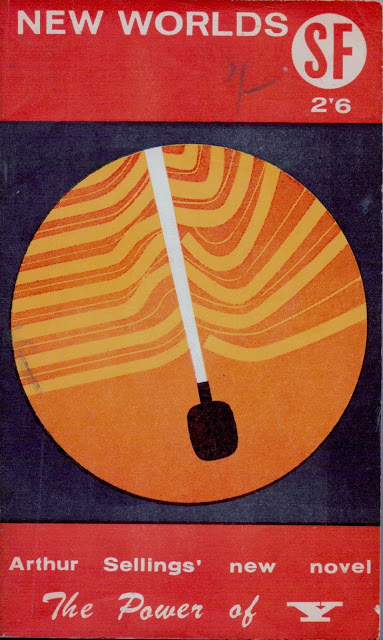 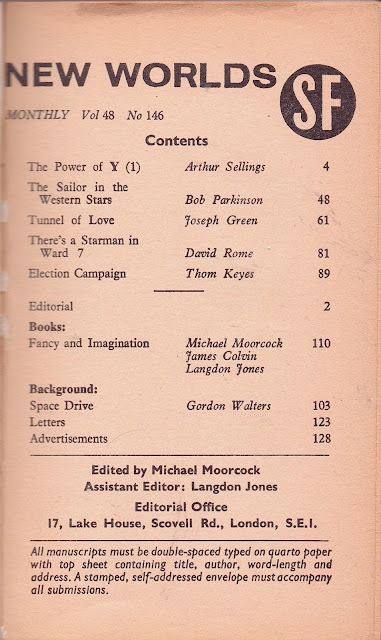 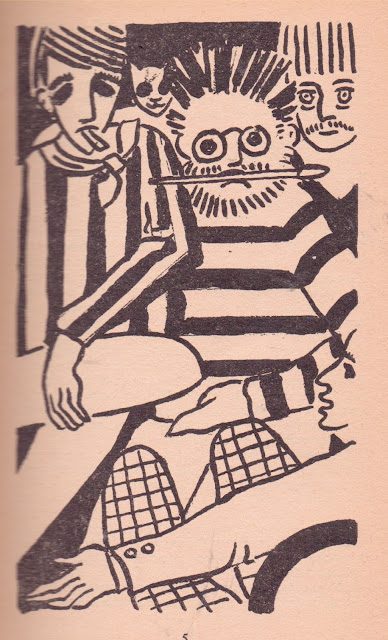 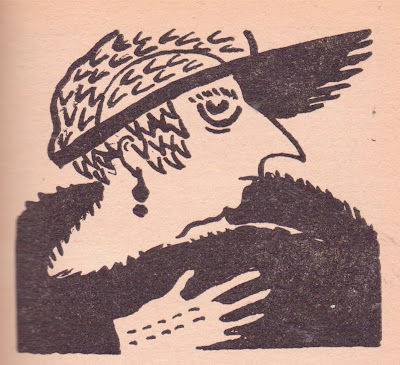 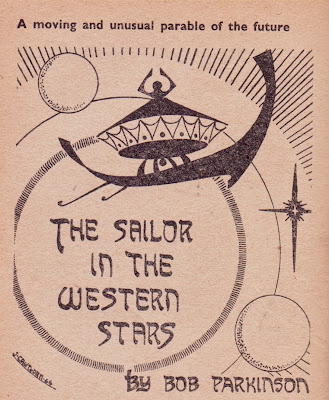 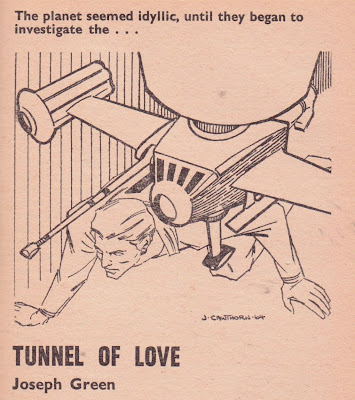 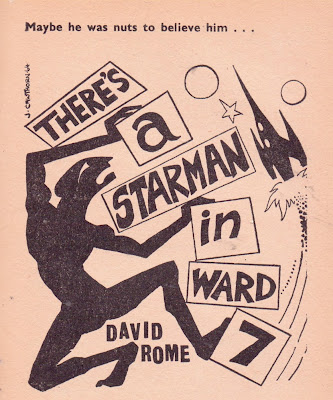 With a new year beginning, and the magazine evidently pulling in enough sales to see itself returned to a monthly schedule, the editorial of New Worlds # 146 finds Michael Moorcock in a buoyant mood, judging 1964 to have been “..another boom year in the field of SF publishing”, and singling out in particular four “brilliant books” published in the past twelve months: Ballard’s ‘The Terminal Beach’, Aldiss’s ‘Greybeard’, Charles Harness’s ‘The Paradox Men’, and – notably – William Burroughs’ ‘Dead Fingers Talk’ (a sort of “remix” of his ‘Naked Lunch’ texts if I remember correctly?), qualified here as “a book which can’t strictly be called SF, yet which deals in all the ideas found in SF”.

After the numerous thrilling and thought-provoking yarns illustrated above (disappointingly, this, and indeed most of the subsequent issues of NW I own, entirely fail to credit their illustrators and cover designers), this issue’s review & commentary section kicks off with a jaunty ‘background’ piece by Gordon Walters, examining the history of the ubiquitous ‘hyper-space drive’ in SF, and swiftly digressing into a discussion of the dilemmas faced by skiffy writers trying to keep pace with real world scientific discoveries:

“Before the first World War, heroic adventures on Mars ala E. R. Burroughs were quite plausible in light of what was known about Mars. Today, the science fiction writer moans softly: ‘I mustn’t dream of cream princesses enthroned on Mars because the astronomers insist that mammalian life is impossible. So I have to find an outlet for my sexual fantasies among a bunch of nasty green lichens!’” 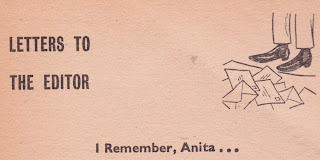 Sex rears its inquisitive head once again on the letters pages, which this month are largely concerned with the aftermath of a Langdon Jones story entitled ‘I Remember Anita’, which was published in NW # 144, and which apparently took a more frank approach to mammalian life than many SF readers were used to.

“I’m not a prude, far from it!,” insists Louis E. Van Gastel of Alost, Belgium. “I enjoy pepper on my meat but I don’t eat a lot of pepper with a little meat if you see what I mean. […] But why must Mr. Jones express the feelings of a young, sensitive artist so crudely! It isn’t sex anymore, it’s downright pornography! What youngster, with refined artist’s feelings, would so blatantly overstress his sexual relation with an adored and respected mistress! No, sir, it should have had a more delicate touch!”

“Am I mistaken if I take your editorials as a warning for shocks to come?,” Mr. Van Gastel continues, “All right, shocks it will be, but please note the difference between shock and disgust!”

A curt response from our editor simply clarifies that NW’s staff “are not publishing a magazine for schoolboys”.

“One of 1964’s most controversial tales you call it; by that I hope to God you don’t mean because of its sexual content, for I don’t think I could take another bout of Should There be more Sex in SF? Mr. Jones has as much right to employ blunt sexual realism as any non-sf writer… if he thinks it justified for his purpose […] The sweaty realism of love and death has been employed to advantage by many writers, most notably by the Existentialists. But when Sartre or Camus do this they use the language of realism.”

With the air suitably cleared, it is left to Tony Walsh of Bridgwater, Sussex (both he and his wife enjoyed the story, he notes), to address the real burning issue here;

“Could not the emotional impact be made just as effectively in another context (substitute an earthquake or nuclear explosion, say)? In other words: Is it SF?”

Meanwhile, Mrs. Elizabeth French Briscoe of Brighton Road, Dublin reveals herself as no friend of ours, calling as she does for an all-out ban on illustrations in Science Fiction;

“Illustration has given SF a bad name. […] it is only recently that I have ‘discovered’ SF, having been put off by garish covers depicting bug-eyed monsters: I took the accompanying reading matter to be a decadent genre slanted toward sadistic boys, until I chanced upon a novel by Arthur C. Clarke.”

Following the lead of Moorcock’s editorial, this month’s review features seem more positive than usual, with MM (under his own name) offering  up extensive praise for the aforementioned ‘Greybeard’ and ‘The Paradox Men’, whilst Langton Jones undertakes an affirmative reappraisal of the work of this issue’s lead contributor, Arthur Selling.

Later on though, our editor’s alter ego James Colvin has the knives out once more, passing acidic comment on the ‘juvenile’ approach taken to SF by publishers, and those among his peers who are willing to pander to it (brave words perhaps from the creator of Elric?), finding time to take at least a few of his contemporaries down a peg or two along the way;

“I’ve had the feeling recently that I’m being cheated all round. Poul Anderson’s ‘Time and Stars’ (Gollancz, 16s.) shows us a writer who, in all his working life, seems not to have developed at all. His best current stuff is as good as his best stuff of ten to fifteen years ago, his worst is as bad as ever. […] This pulp Western dressed up as an SF story [is] badly written, highly reactionary and embarrassingly sentimental – and it won this year’s Hugo Award for best short fiction. […] I’m still bewildered – can it mean that the Hugo has become valueless as an indication of what is good? I’m equally bewildered at Gollancz for selecting it. I always had the impression that he was a left-wing publisher. Not any more, it seems.”

“Damon Knight’s reputation is good, yet surely he can’t have gained it from his fiction? I hoped his latest novel might be an improvement on his short stories, but no such luck.”

‘Colvin’ does at least conclude with a mention of one notable volume that might have slipped beneath readers’ radars;

“Anthony Burgess’s ‘A Clockwork Orange’ (Pan, 3/6) is a wonderful study of a run-down society of the future, told in the first person by a latter-day Teddy Boy in his own weird patois. It is powerful and horrifying – and spoiled by a hurried, rather sentimental ending. Still much better than most of the stuff being produced inside the field at the moment.”

So much for those ‘encouraging signs’ then. 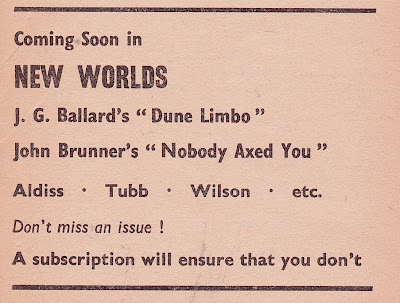 Hi Ben, greetings from stormy mid-Wales. Loving the way you're dealing with this consecutive cache of NWSF by concentrating on the editorials and letter pages... gives a real unglamourised view of the cultural rebellion going down in the Grove! It's like a cross between comedy gold and virtual real-time literary archaeology! I have to say, the Messers Moorcocks do come across as ever-so-slightly precious John Brunner style Old Left cardigan wearers rather than the multivalue motorway Maknovite anarchists of later issues: this is pre-kaftan Moorcock, gelled in aspic, wonderful stuff.

One could even, Ben, if this run of NWSF could somehow be extended by a year or so, pinpoint *probably to the month* that certain ergotamine derivative leisure chemicals first trajected the Moorcock brainpan. I have a feeling that this occurred around the time the B&W illustrations went Op Art overnight, but I could be wrong. Thanks to this blog, this vital litetary question could actually be solved by Science!

I have to side with Colvin on this one, some of the Langdon Jones pieces from this period still make for some extraordinary reading...