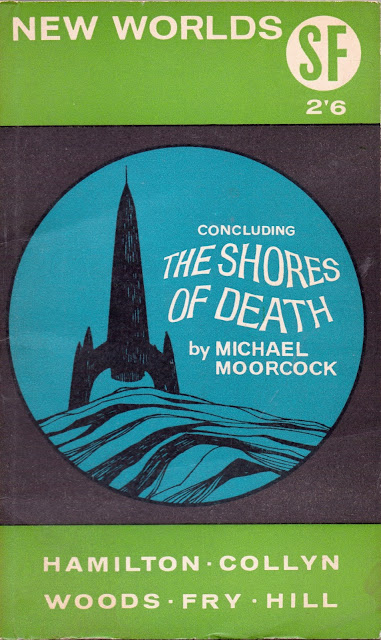 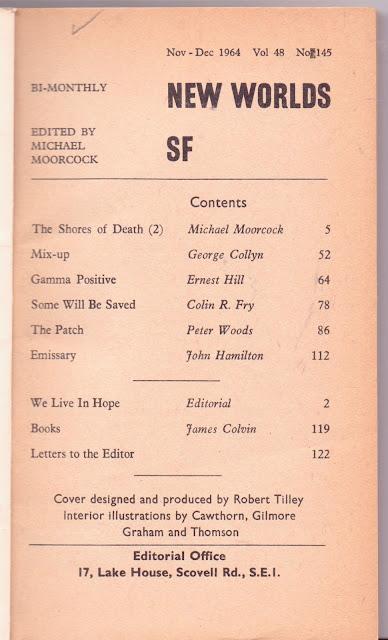 An unexpected treasure awaited me whilst mooching about in Blackheath’s charity shops last month: a stack of Moorcock-era New Worlds issues. Lacking either the money and storage capacity to pick up the lot, I merely grabbed a selection, which I now intend to present to you in chronological order in a monthly-ish series of posts, thus to give us an insight into the unique position the magazine occupied in the mid/late 1960s, and to help illustrate the process by which it eventually became a prime meeting point between old school SF fandom and the literary counter-culture… or something like that. It’ll pass the time, anyway. 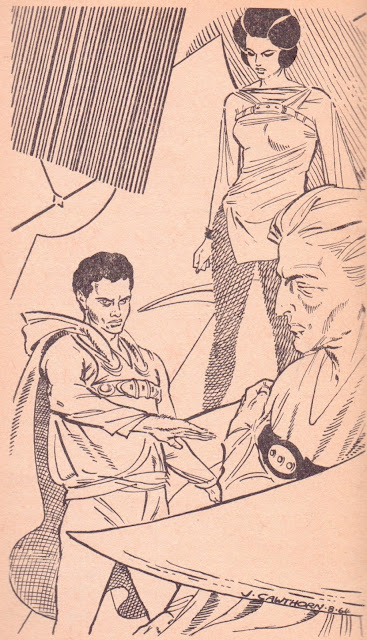 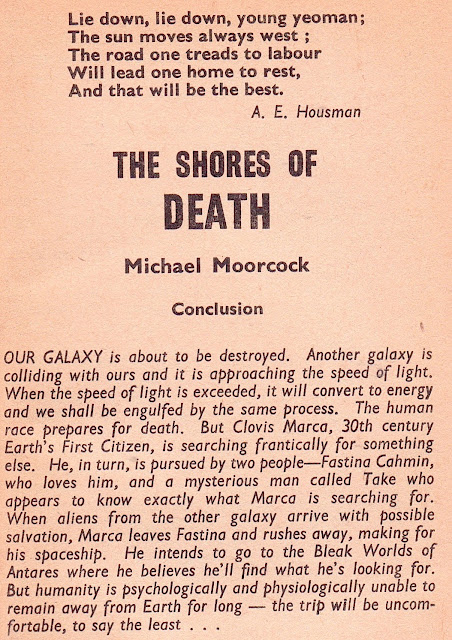 In April 1964, a letter from 25-year-old Michael Moorcock appeared in issue 141 of New Worlds SF, lamenting both the planned cancellation of the magazine, and the recent departure of its editor, John Carnell. To say that penning this letter was a good career move on Moorcock's part is something of an understatement. Apparently Carnell was impressed with what he had to say, and behind the scenes, things obviously moved quickly. In May 1964, New Worlds # 142 appeared on schedule, now under the auspices of new publishers Roberts & Vinters, with Michael Moorcock installed as editor.

The first issue we’re looking at in this series finds Moorcock only six months into his editorship, and, whilst you wouldn’t know it from the defiantly trad illustrations and cover design accompanying his own ‘The Shores of Death’, the battle lines between the old schoolers and the new wave are already being drawn. 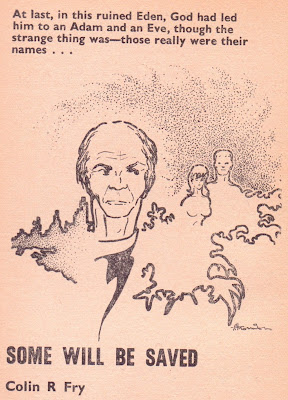 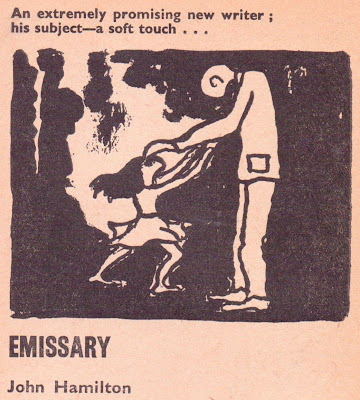 In a rather po-faced editorial, Moorcock laments the poor quality of SF on film, radio and television, directing particular ire in the direction of The First Men in the Moon, a now largely forgotten British adaptation of the HG Wells story of the same name (although he did think George Pal’s ‘The Time Machine' was quite good, “..save that it replaced Wells’ socialistic message with a fuzzy humanistic one”). Point made, he then moves on to recommend the first issue of the SF criticism zine ‘Epilogue’, which amongst other things apparently includes L. Sprague de Camp outlining his belief that too many contemporary writers are simply “re-hashing the work of the old masters” – a pretty ballsy claim if you take a minute or two to google Mr. de Camp’s own literary legacy. Finally, our editor reminds London SF readers that “..many writers and readers meet regularly on the first Thursday of every month at The Globe Tavern, Hatten Garden (near Gamages). The atmosphere is completely informal and all are welcome.” Thanks Mike.

One of the things that has most surprised me whilst perusing these old New Worlds is the sheer amount of venom included in the magazine’s critical writing. I’m not sure whether this was simply representative of the discourse in SF fandom at the time, or whether Moorcock and his pals (assistant editor Langdon Jones and staff writer James Colvin) are deliberately trying to take their elders down a peg or two, but either way, though it seems somewhat at odds with a culture built entirely on fan-boy enthusiasm, it certainly makes for more lively reading than a bunch of back-slapping.

In his book review column, Colvin bestows some reluctant praise upon Robert Heinlein’s ‘The Unpleasant Profession of Jonathan Hoag’, before, predictably, tearing him a new one for the majority of his other recent output (“Here we get a good glimpse of Heinlein in his cosy reactionary mood (just as insidious as his more often noted violent reactionary mood.)”). Colvin’s writing style here is concise, acidic and often very funny, as is aptly demonstrated by the following page, which I thought I’d scan in its entirety for the purposes of Strong Truth: 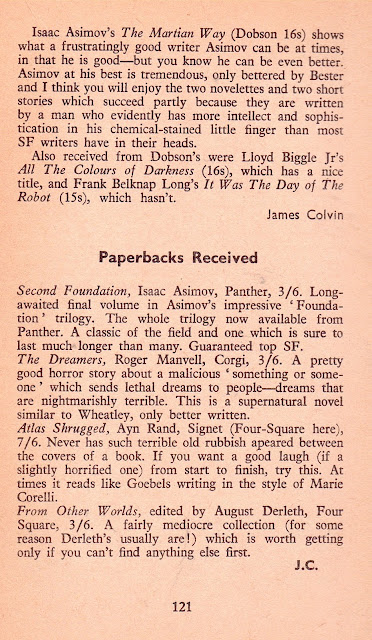 On the letters page meanwhile, Mrs Ellen Channon of Nettleham, Lincoln declares New Worlds a “..jolly good magazine, once you get past the covers!”, and demands to see more Moorcock in its pages (I’m not even going to go there).

“I don't know who acclaimed Ballard the ‘finest modern SF writer’ but his ideas are too thin – like those other admirable lads Sturgeon and Aldiss. Give him the title of the best writer writing SF, which is a bit different. It’s probably the main problem today. Critics both in and out of SF plead for better writing and characterisation in SF, but they carp when, as it inevitably must, it crowds out the old SF elements.”

“On the other hand,” Selling concludes following his assessment of the magazine’s new approach, “it’ll have me developing some of the ideas that I’ve kept in a drawer this many years for the knowledge that none of the other editors would smile on them.”

"We look forward to seeing them!" the NW editors respond, and, in a turnaround that makes even Moorcock’s assumption of editorship seem slow, the following page announces that New Worlds # 146 will lead with “the first part of Arthur Selling’s new satirical novel ‘The Power of Y’”, with supporting stories from Ballard, Brunner and E.C. Tubb amongst others – and that indeed is the issue we’ll be looking at in the next thrilling instalment of this series. Bet you can’t wait.
Posted by Ben at 21:33

I love that "it reads like Goebbels writing in the style of Maria Corelli"!

You jammy bugger, Ben! If I'd have found that cache of NWSF in a second-hand shop... I'd've scanned the covers and sent them straight to you with the word 'SWAG!' as my only comment!

As an aside, 'James Colvin' was a Moorcock *nom de plume*, and, later in the 60s, died in a filing cabinet related accident... Can't wait for those Mal Dean and Keith Roberts graphics to start trickling from your new collection! Did I mention the fact you're a jammy bugger?

Ah, of course! James Colvin = JC = I should have known! An inky-fingered, literary critic avatar of the Eternal Champion perhaps?

Anyway, I'm afraid my haul wasn't that mighty Steve - just six issues, all from '64-'66 (so pre-Mal Dean I think - in fact some of them are pretty scant on any kind of illustration..), but nonetheless I've enjoyed reading through them a lot, and have been meaning to head back to the shop to see if they've got any others left, first chance I get... can race you there, maybe? ; )