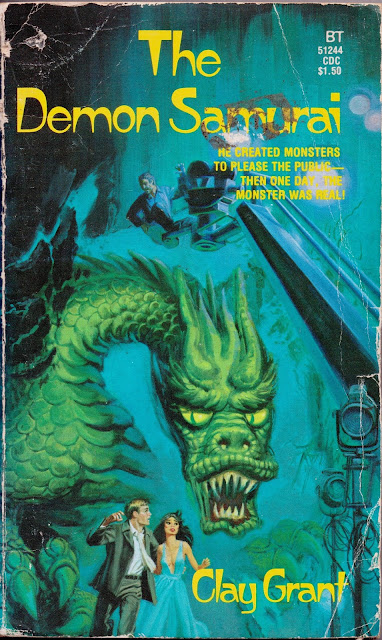 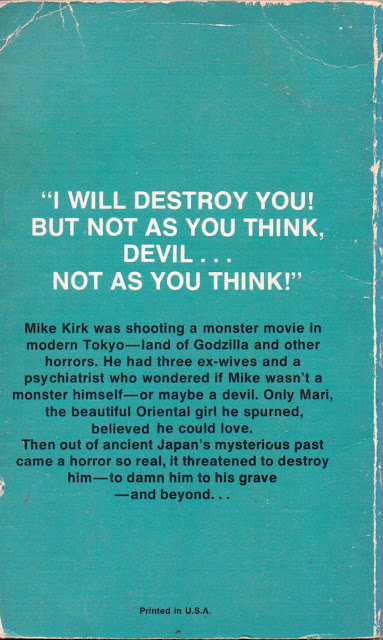 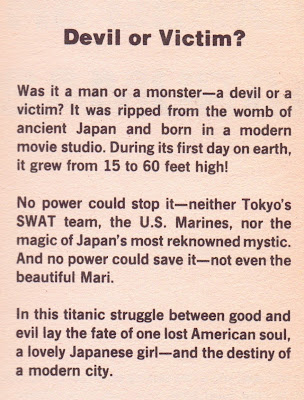 Well after I read the back cover copy, I couldn’t leave this one on the shelf.

As it turns out, in spite of the loopy storyline, Grant’s prose is as clunky and long-winded as any other bottom dollar late period pulp, and – inevitably, perhaps – his tale of a macho American horror producer embroiled in a supernaturally troubled international co-production comes suffused with an atmosphere of alienating orientalism so thick that it often makes for painful reading.

Both of these flaws are perfectly exemplified by a page I flicked to at random, in which Grant describes his protagonist’s visit to a Tokyo doctor’s surgery. After several paragraphs of entirely bland description, our bold scribe concludes that “..it would have been the same as a doctor’s waiting room anywhere else in the world, but for the fact that everyone in sight was Japanese.” Clearly, the editors at Belmont Tower must have been proud to have a writer of such rare insight on the payroll.

But, we shouldn’t mock too easily. Hasn’t crude stereotyping and rambling digression been the bread butter of pulp fiction since day one? And is the gratuitous other-ing of a foreign culture carried out by Grant here really much different from, say, the affectionate goofing on Chinese stereotypes seen in John Carpenter’s universally beloved “Big Trouble in Little China”? Is his vision of Japan through the eyes of an unsympathetic foreigner, with wizened old senseis, impossibly beautiful geishas and hyper-active computer whiz-kids around every corner, not just a light-hearted take on the same material explored in Paul & Leonard Schrader’s script for The Yakuza?

Well, whatever. Who cares. ‘Demon’s Samurai’ could be forgiven any number of sins if it was actually much fun to read, but the irony is that whilst Grant produced a pretty joyless novel, he similtaneously knocked out a plot line that could have made for one HELL of a fun movie. In my mind I’m seeing a Toho / AIP co-production circa 1980, with Kinji Fukasaku and Larry Cohen wrestling for the director’s chair…. ah, if only…

And whilst I drift off into reveries over that one, here are some other no doubt equally scintillating offerings from Belmont Tower’s 1978 line up. (And, I mean, say what you like about 'The Demon Samurai', but it's a screaming bonfire of risk-taking originality compared to these titles...) 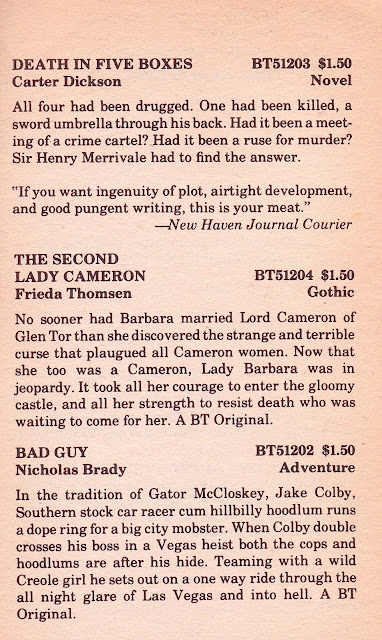 As for those other Belmont titles, not all is as it seems: Carter Dickson was a pseudonym for John Dickson Carr, a reliable exponent of the classic whodunnit, with a taste for the gothic and absurd.