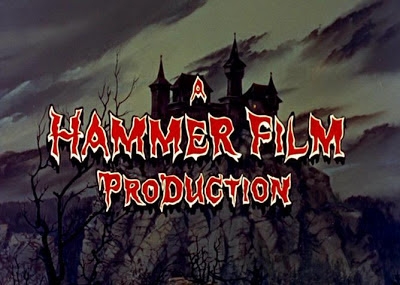 Posted as part of the Peter Cushing Centennial Blogathon.

For no reason at all beside the fact that I enjoy making pointless lists, and that thinking about Hammer horror films makes me feel warm and cozy as I plod through the dreary complexities of the working week, I’ve recently found myself casually pondering what my favourite entries in the studio’s filmography are, and why. Just a bit of harmless, everyday nerd-think, but I thought it might translate into some nice, easy-going blog posts to keep things ticking over until I feel like I’ve got the energy to handle some more heavy duty movie review-age.

Not that cutting things down to a workable top fifteen was easy, mind you. I mean, I can reel off my top three at the drop of a hat (long-term readers with good memories may recall what they are), but beyond that, things get a bit murky. With the untouchable top level out of the way, my second tier of Hammer favourites consists of a large number of movies (most of the Frankensteins and Mummys, a few of the better Draculas, the Carmilla/Karnstein films and so on) that are just plain good - so consistent and enjoyable that it’s difficult to really pick any one over the others. They all do exactly what horror movies are supposed to do whilst still including enough quirks, nuances and unforgettable moments to make each one unique, and for that I am very grateful.

Perhaps inevitably therefore, the list below swings somewhat in the direction of the studios more eccentric and low-key productions - they being the ones that tend to stick most strongly in my memory. But that’s not to say that I couldn’t happily watch their more ‘routine’ offerings all day for the rest of my life and have a perfectly nice time in the process.

I’d imagine that most of this blog’s readers probably have more than a passing familiarity with the Hammer catalogue, but if there are any newcomers in the audience, I hope my list might lead you to some good entry points into the world of these films. And for the old hands out there, well, dumb lists like this are always a good way to spark discussion, and I always like talkin’ Hammer, so by all means feel free to let rip in the comments box.

Oh, and before we begin, probably also worth mentioning that this list is by no means supposed to be read as a complete or final judgement on the Hammer canon. Given prolific nature of the studio’s output, there are still plenty of their films that I’ve never even seen, so who knows, perhaps there are some whole other top twenty lurking out there that I’ve not yet even become acquainted with… and what a nice feeling that is.

So without further ado… 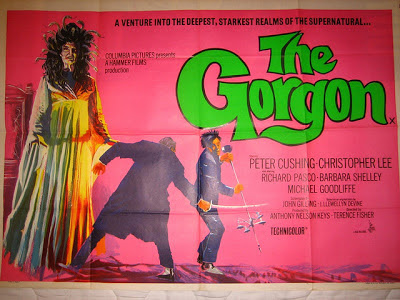 I wrote about this one pretty extensively here, and for me it remains one of Hammer’s most romantic, impenetrable and philosophically unglued outings, as the limitations imposed by a rather poorly thought out supernatural conceit are countered by one of the studio’s grandest fairytale gothic production designs, a chillingly ambiguous Cushing performance, and some soul-aching ruminations on the nature of entropy and confinement. Not exactly a good choice for a laugh and a few beers, but compelling viewing all the same. 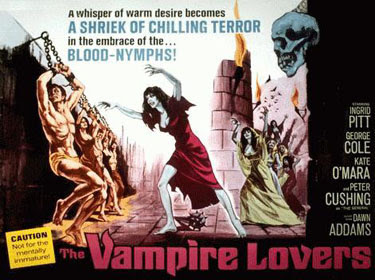 Amid all the misfires, oddities and strange diversions that comprise Hammer’s catalogue of vampire films, ‘The Vampire Lovers’ is one of the more straight-forward entries, and also, I think, one of the best. Delivering pretty much exactly what you’d expect in terms of lavish Victoriana, nocturnal cemetery hi-jinks, furtive hints of lesbianism and craggy-faced puritanical ass-kicking, Roy Ward Barker’s initial take on the Carmilla mythos essentially defines the agenda for the ‘70s Euro-vampire movie, setting a bar that the continent’s other purveyors of such material could proceed to soar above or mambo under as they saw fit. Although it never really achieves anything exceptional (beyond a gentle bit of first-time-in-a-British-horror same sex petting), ‘..Lovers’ is solid as a brick shithouse - as generic and satisfying as horror movies get. 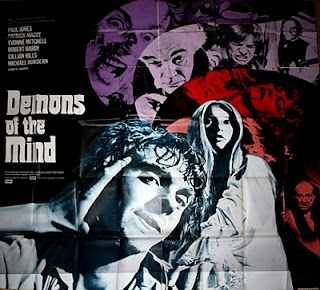 As noted above, most of my favourite Hammer films serve to evoke a warm, nostalgic atmosphere that I find very reassuring. This nasty little number though is a different kettle of fish entirely. With disorientating, bombastic direction from Peter Sykes and a script from the reliably out-to-lunch Christopher Wicking, ‘Demons of the Mind’ is a decidedly un-Hammer-like production that seems to be aiming instead to smash a hole in the side of your head, draining out the bits of your mind that think about the weather and what’s for dinner, and replacing them with endless close-ups of Robert Hardy’s sweaty moustachioed face, screaming in tormented delirium. Coming on like ‘The Black Torment’ on steroids, or a dark old house murder mystery spiked with some lethal extract of psychotropic mould, this psychologically assaultive, dark-family-secrets country estate slasher farrago simply defies description. Much like Coppola’s ‘Dementia 13’ a decade previously, you’ll know you’re onto a bit of a rum do when Patrick Mcgee turns up halfway through and actually seems like one of the more relaxed and well-balanced individuals on-screen. 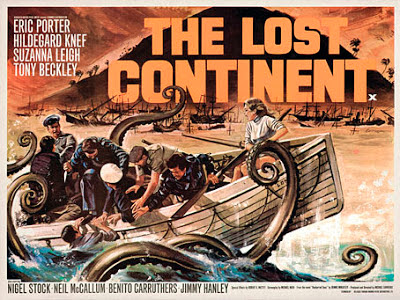 Probably the biggest WTF in the Hammer filmography, this ill-starred Dennis Wheatley adaptation is a colossally misguided, schizophrenically inconsistent, directionless, crippled-at-birth vanity project disasterpiece that I’m afraid to say I absolutely love. The subject of so much behind the scenes aggro that it nearly tore Hammer apart, with James Carreras eventually stepping in to forcibly shut down his son Michael’s floundering production, the film that eventually emerged is so astonishingly strange, I’m surprised it hasn’t been cited more often as a bone fide ‘what-the-hell-were-they-thinking’ cult classic. I could say a lot more about this one, and hopefully at some point I will, but for the moment let us simply shake our heads in disbelief as a narrative framework seemingly requisitioned from a cynical ‘70s airport disaster novel stumbles headfirst into an anything-goes world of ridiculous stop motion sea monsters, fanatical Spanish Inquisitors, random tentacle attacks, descendants of marooned 16th century mariners bouncing around on giant, balloon-aided hovercraft shoes and, notably, no bloody lost continent. Incredible. 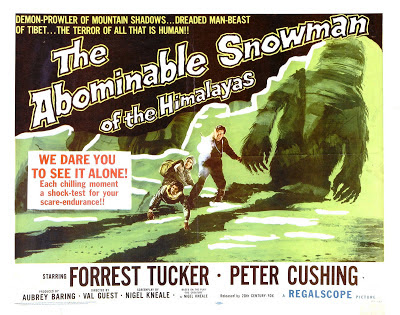 Another film that was been somewhat overlooked due to a perceived failure to directly deliver on the title, characteristically solid Val Guest joint ‘The Abominable Snowman’ has long been dismissed by monster fans as talky, stagy, uneventful. Once one can accept the fact that few bigfoot-related hi-jinks are forthcoming however, I think it can be appreciated as a very fine piece of work indeed – not a horror movie as such, nor a daring-do action-adventure flick, but as an atmospheric and intelligent study of men coming face to face with the unknown, finding their assumptions about the world mutating and collapsing, as physical peril and the quest for basic survival becomes ever more urgent. Whilst ‘..Snowman’s scientifically-inclined, remote location monster movie set-up was already pretty boilerplate stuff by the late ‘50s (there are clear nods here to both ‘The Creature From The Black Lagoon’ (’54) and Howard Hawks’ ‘The Thing from Another World’ (‘51)), Nigel Kneale’s script nonetheless takes a deeper and more challenging approach to the material than his predecessors, resulting in something wholly unique.

As with much of his best SF writing, Kneale here concentrates on mixing up the scientific with the sublimely mysterious, challenging both rationalists and mystics to come to terms with a more nuanced reality that fits nobody’s blue-prints. A careful balance of location and set-bound shooting (Hammer actually flew a crew out to the Pyrenees for this one, believe it or not) and a commanding central performance from Cushing really sells us on the reality of the on-screen drama as it unfolds, with Guest wisely taking a Val Lewton-like fear-of-the-unseen approach to proceedings, emphasizing Kneale’s conception of the yeti as not just a physical presence but a wholly alien, telepathic intelligence, and giving the film an aura that is both chilling and actually kinda beautiful, even as the bolts tighten on a subdued but persistently effective bit of survival horror.

Ben -- I agree that making lists like this can be painful, but it is a benefit for those of us who learn from them. I like your choices for 11-15. I'm looking forward to 1-10. Thanks for sharing.