Goin’ To Japan / Week of Hong 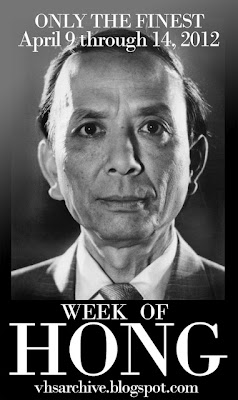 Well I’m that’s all the Think Pink we’ve got time for at the moment. Pity, because there are loads more pinky violence films I’d like to have written about – guess I’ll save ‘em up for a second installment at some point in future.

As mentioned in the introductory post, I’m going to Japan tomorrow, so won’t be posting anything for the next few weeks.

In the meantime though, why not pop over to Lost Video Archive, where the folks who brought you the unforgettable Linda Blair and Yaphet Kotto events are gearing up for a Week of Hong on April 9th to 14th, celebrating the career of prolific Asian-American character actor James Hong.

I’ll confess that the name James Hong didn’t immediately ring a bell with me, but it only took one look at a photo to provoke instant “Oh, THAT guy!” recognition. Because seriously, Mr Hong has done sterling work in a LOT of movies, many of which you will have seen.

I’m sad that I won’t be able to participate this time due to being out of the country (guess that 2500 word dissection of ‘Wayne’s World II’ will have to wait), but I’d very much urge you to check out the contributions of the other participants later this month, and maybe even consider signing up yourself if you’re a blog-writing type person.

Anyway, take care of yourselves, and I’ll be back in the second half of April, maybe with some exciting things in my suitcase to watch/scan/write about.
Posted by Ben at 15:52

Thanks for the mention, this is going to be a fun event! Have an awesome trip!