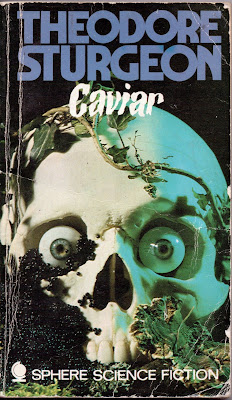 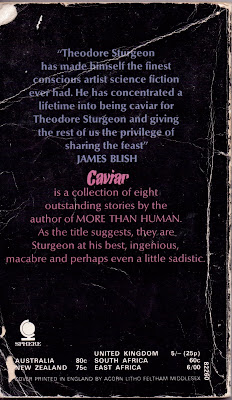 “He had never held a girl before. He was not terrified; he had used that up earlier when he carried her in and kicked the door shut behind him and had heard the steady drip of blood from her soaked skirt, and before that, when he when he had thought her dead there on the curb, and again when she made that sound, that sigh or whispered moan. He had brought her in and when he saw all that blood he had turned left, turned right, put her down on the floor, his brains all clabbered and churned and his temples athump with the unaccustomed exercise. All he could act on was Don’t get blood on the bedspread.”

Best-known to many as the man who coined the unassailable critical maxim “90% of everything is crap”, Theodore Sturgeon’s published writing has in my experience been mercifully unencumbered by the limitations of its author’s own diktat. Certainly, his best-known novels (‘More Than Human’, ‘Some of your Blood’) are amongst the best the classic era SF has to offer, with his writing bringing a refreshingly visceral, humanistic and darkly humorous quality to a genre that was all too often lacking in that kinda thing.

Despite owning several volumes of them though (the covers, the covers), I’ve never previously had a go at tackling Sturgeon’s short stories, which would seem to make a quick rip through author’s-personal-faves collection ‘Caviar’ long overdue.

How did it go? Well the back cover’s suggestion that Sturgeon’s imaginings are “macabre and perhaps even a little sadistic” seems a pretty spectacular understatement in view of the opening story here, ‘Bright Segment’ (1955), a jaw-dropping tale written from the point of view of a mentally handicapped (possibly autistic?) man who finds a stabbed woman bleeding to death on the street and drags her back to his one-room bedsit to ‘fix her up right’. The exhaustively detailed accounts of his DIY surgery - involving duct tape, pliers, aluminium gauze and sewing needles - will be enough to make even the hardiest horror fans go a bit weak at the knees, but thankfully our fella is in fact a skilled and conscientious ‘repairman’, and when the woman eventually regains consciousness, the fractious relationship of mutual dependence between the two proves more unsettling than any amount of gore.

Sadly none of the tales that follow are quite as memorable as this extraordinary opener (which could form the basis for a great, disturbing low budget horror flick, assuming it hasn’t already), but they’re all worthwhile to one extent or another, most notably for the way in which Sturgeon seems to end up completely reversing the standard expectations of SF stories, crafting tales full of solid, fast-moving prose, engaging characters and weird incidental detail… but often weighed down by central concepts or twist endings that seem hackneyed, predictable or just plain dumb (to a modern readership, at least).

Case in point is ‘Ghost of a Chance’ (1941), which begins with an intriguing late night encounter between a worldly ladies man and a potential conquest whose behaviour seems to defy all reason, including an opening paragraph that’s hard to beat in the gettin’-the-reader-hooked stakes;

“She said ‘There’s something following me!’ in a throttled voice, and started to run.
It sort of got me. Maybe because she was so tiny and her hair was so white. Maybe because, her white hair and all, she looked so young and so helpless. But mostly, I think, because of what she said. ‘There something following me.’ Not ‘someone’. ‘Something.’ So I just naturally hauled out after her.”

Subsequently, the story takes in a detour via “the Duke’s beer garden party”, during which the titular bohemian aristocrat amazes guests with his twelve foot high sunflower and trained squirrel, before a slip up on the part of our protagonist spells disaster for both, ending the party in a scene of chaos akin to something out of a ‘60s Peter Sellers movie. Sadly though, this otherwise highly enjoyable tale eventually concludes with a groan-worthy, sub-Scooby Doo wrap up that would make you want to punch Sturgeon in the face if he’d spun you the yarn in person.

Most of the other stories follow suit to one extent or another, with the straight SF numbers generally faring better than the light-hearted horror/mystery ones, but nonetheless Sturgeon’s inane skill as a writer kept me truckin’ throughout, and, just like his novels, it’s strangely refreshing to encounter an SF writer who puts more emphasis on strong, empathetic characters and emotional gut-punches than on ingenious metaphysical conundrums. A swell read, with certain reservations.